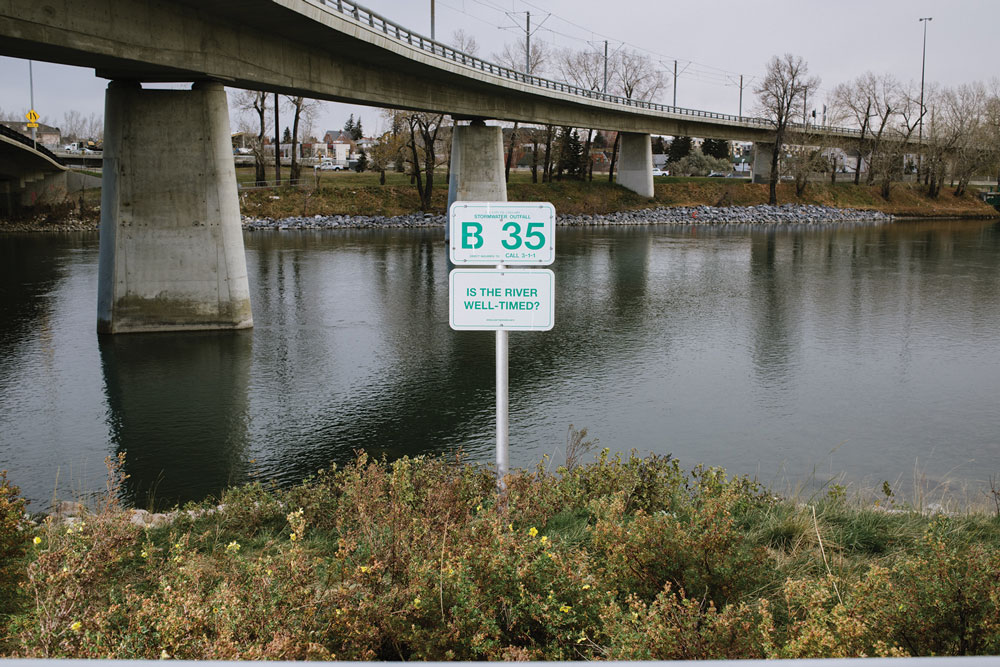 Is the river curious? Is the river malevolent? Is the river gracious? A hundred questions are broadcast from signs that mark Calgary’s stormwater outfall along the Bow and Elbow rivers. Well-camouflaged in size, colour and font to match their official partners, an unexpected tone and an invitation to visit the website asktheriver.info give the signs away as artful intruders. With merely four words, each sign conjures reflection. If the rivers were personified or mythologized, what would be their character? How does experience shade our response?

Broken City Lab, a collective of artists based in Windsor, Ont., since 2008, usually focuses on urban spaces, often using text. When the City of Calgary’s Utilities and Environmental Protection department invited BCL to participate as artist in residence in its public art program, Watershed+, the focus on the natural features of the watershed presented a challenge. In July 2013, Hiba Abdallah, Joshua Babcock and Justin Langlois arrived in Calgary for the first of several visits. They quickly saw close connections between the life of the city and its rivers, especially in the weeks following the June 2013 flood. Their research and imagination culminated in the Stride Gallery exhibition, Varying Proximities, which included a telephone connection: 1-844-OUR-BOW-RIVER (1-844-687-2697) and the whimsical signs. City workers then placed them temporarily along the pathways, where they continue to surprise and puzzle, three years after the flood.

The signs can be found along the pathways, and people can call to hear the river from anywhere in the world until fall 2016.