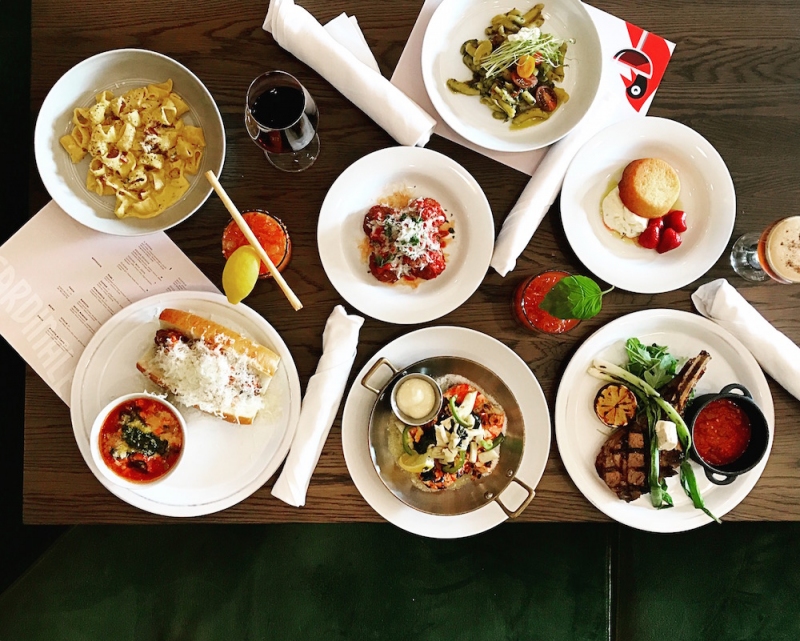 A slew of new restaurants have opened just in time for fall, including a pasta bar in the Beltline, an Italian restaurant in Victoria Park and a modern Canadian restaurant in Britannia. Here’s what you need to know about the latest food-related openings, news and events in Calgary.

A backyard alley party is coming to 17 Avenue S.W.

17 Avenue S.W. is currently under construction, but there’s still plenty of reasons to visit the popular dining and shopping strip. For two weekends (September 22 to 24 and September 29 to October 1), there will be a backyard alley party set up in an alley between 4 St. and 5 St. S.W. Stop by to check out local art, catch an outdoor movie screening, shop and more. Restaurants including Local 510 Public Tavern, The Living Room, Ox Bar de Tapas, Ricardo’s Hideaway, National on 17th and Ship & Anchor Pub will also have special patios set up in the alley.

Bread & Circus is the newest restaurant from BMeX Restaurant Group, who are also behind local eateries Una Pizza + Wine, Una Takeaway, Frenchie Wine Bar and Ox Bar de Tapas. The 38-seat Roman trattoria is located next door to Una Pizza + Wine in a 900-square-foot space (which feels surprisingly spacious) between the Una Takeaway counter up front and Frenchie Wine Bar in the back. The restaurant’s tables can be reserved online, while walk-ins can grab a spot at the five-seat counter or the 10-seat bar. The bar counter is where all the action is, offering an excellent view of chef Kayle Burns and his team whipping up dishes. The small menu features a few antipasti dishes and salads, but the main focus here is the restaurant’s made-in-house pasta. Try the spaghetti alla bottarga, oxtail rigatoni and the cacio e pepe. For dessert, there’s a goat milk panna cotta and two housemade gelato options.

When the lease recently came up for Victoria Park’s La Vita é Bella, the restaurant owners knew they wanted a change but didn’t want to leave their space inside of the historic Defoe Building. They decided to overhaul the restaurant, and the result is Cardinale. The team showcased the building’s more than 100 years of history by exposing the brick behind the walls, then added green velvet booths, white oak chairs and a larger bar to the front room. A sister restaurant to Kensington’s Hayden Block, Cardinale has 85 seats inside and another 60 out on the patio. Steven Dowdell, Le Vita é Bella’s former head chef, has stayed on as the chef of Cardinale and created an entirely new menu. The restaurant uses traditional Italian cooking methods and local produce and meats to create its menu of brisket and shortrib meatballs, salt baked prawns, gnocchi, pappardelle and large plates of heritage pork braciole or seared halibut. The restaurant makes its pasta in-house daily, and each pasta dish is available in two sizes to make sharing easier. There’s also a sweet deal where you can get half price pasta every night after 9 p.m. (except Sundays). The drink menu features a selection of wine and 12 cocktails featuring Italian spirits.

Located in the space formerly occupied by 80th & Ivy on 17 Avenue S.W., Chronicles Public House is Lower Mount Royal’s newest neighbourhood gathering spot. The local pub opened its doors on July 22. The menu features pub fare like beer battered fries, wings and chili lime nachos, sandwiches, burgers, salads and desserts like candied bacon, Oreo cheesecake and cookies and milk. On tap, you’ll find six local beers from breweries including Tool Shed Brewing, Village Brewery, Common Crown Brewing Co. and more, plus a selection of Tall Boys. And if you love cartoons, be sure to stop by on Saturday mornings to watch them playing on the big screen while you eat brunch.

For the next two weeks, you can satisfy your burger cravings at The Guild during its new Burger Fest. The downtown restaurant has a promotion featuring nine special burger creations from September 15 to October 3. The nine burger offerings include The Morning Glory burger with a maple sage sausage patty and a fried egg, a Soft-Shell Crab Po’ Boy and Le Burger, which features two Beretta Farms chuck patties, bacon rasher and blue cheese. See the full list of burgers here.

The Nash & Off Cut Bar launches its Off Cut Culture Club

The next time you visit The Nash & Off Cut Bar on a Saturday, you could also do a little bit of shopping. The Inglewood restaurant recently launched its Off Cut Culture Club, a pop-up series that features a different local vendor in the Off Cut bar every week. The series runs on Saturdays between 2 p.m. and 5 p.m. until November 25. Order a happy hour drink and shop from upcoming vendors like Little Lion Man Leather on September 23, Lavish Society Co. on September 30 and Adrian Martinus on October 7. See a full list of vendors and dates here .

On September 9, Run Pig Run opened its doors in the space formerly occupied by the Mirakuru restaurant on 17 Avenue S.W.. A self-proclaimed “Alberta bistro,” the 4,000-square-foot, 110 seat restaurant offers a local and seasonal dining experience within a modern space. Given the restaurant’s name, it’s not surprising that there’s a fair amount of pork on the menu, including bacon and pulled pork poutine, carbonara and bacon bourbon brownies with maple syrup that feature the restaurant’s housemade bacon.