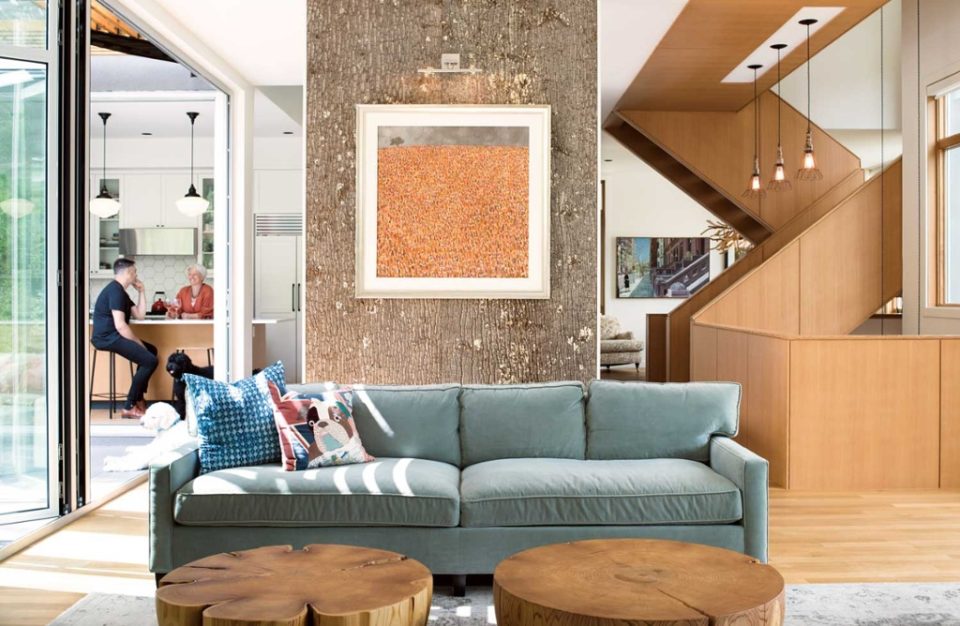 A Vision in the trees

On a late afternoon, Becky and Colin Feasby and their two daughters, Claire and Katie, are gathered around the stone kitchen island in their family home chatting about the events of the day. Their two labradoodles, Magic and Larry (named after the basketball greats) lie peacefully on the white-oak floors, watching for rabbits in the forest-like backyard. The home is warm and comforting, filled with light and surrounded by mature trees and greenery.

Eight years ago, this scene – the family enjoying life in a light-filled, architecturally designed space – was a distant vision. The Feasbys had lived in Kensington for years, but as the girls grew into teenagers, their century-old Victorian home had become too confined. So when they found a larger home on a third-of-an-acre lot in the established northwest neighbourhood of Briar Hill, they jumped at the opportunity. “When we bought the home, we really bought it for the lot. It was a nice 1960’s house, but it was shockingly dark,” says Becky Feasby.

The couple had plans to upgrade and renovate the existing home, but wanted to live in it for a while to uncover its quirks. “As time went on, we began to discover more and more things that were wrong with it in terms of plumbing and so forth,” says Feasby. “And Colin really wanted to build. He essentially talked me into it.”

To help with the design on the new build, the couple brought on architect and designer Jeffrey Riedl of Robert Pashuk Architecture Inc. “When I met him, we just clicked. He is super calm, which I like and value,” says Feasby, adding that she took up knitting during the build to keep her nerves at bay. “Building can be stressful. Your mind is always whirring. Knitting is very meditative.” (Riedl also benefitted from Feasby’s knitting therapy as the recipient of a toque.)

The homeowners’ love of nature and gardening inspired the indoor-outdoor synergy of the design. 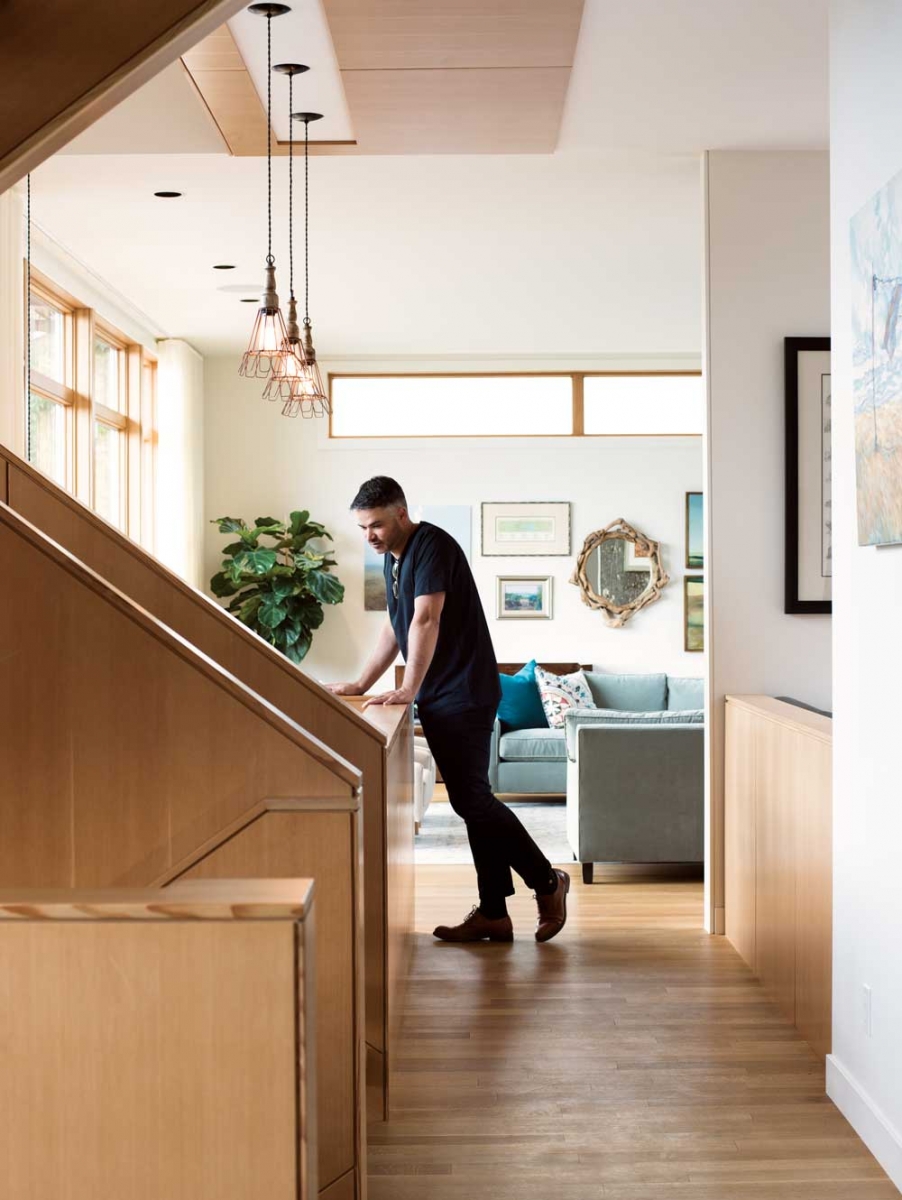 Carpentry throughout the home, including the staircase, by prime millwork; pendant lights designed by crash industrial supply (no longer operating)

Designer Jeffrey Riedl leans over the dramatic central staircase that serves as a focal point for the home’s common areas.

When it came to the architectural design of the Feasby home, Riedl called upon his skills as a designer and artist to achieve a feel that was urban, but not too urban. “We were really going for this contemporary-farmhouse look,” he says.

The Feasbys’ must-have list included a street-level entry, which was a challenge because of the terraced lot. The solution was to create a walkout front, unique to the street, which influenced the design. “We [built] a plinth (base) and then a home that sits on top. Essentially it is a three-storey home that was made to look like a two-storey home,” says Riedl.

The home features integrated levels and a steeply pitched roof that provides stunning ceiling heights and vaults. A sculptural staircase flows from the foyer to the third level, winding through the centre of the design and creating a focal point. “The home really tells a story, connected by the staircase. We created sight lines between places that you might not be in, but that you might want to go to – [for example], a view of someone working at the desk on the top level or exiting a room on the main floor,” says Riedl.

A three-sided fireplace on the second level bridges the kitchen, the dining room and the stairs, its flames offering a warm welcome to guests entering the home’s communal spaces.

Classic lines and rich materials create a sophisticated balance, which is enhanced by the natural environment that surrounds the home, and which informed many of the design decisions.

Certainly for Feasby, one of the home’s best qualities is that it creates a miles-away feeling. From the beginning, she approached the design with an artist’s eye, incorporating beauty and colour. In the kitchen she held out for a gorgeous jade-green oven and sourced a collection of industrial-style fixtures from artisans in California. “They were working out of their boat in Santa Monica. I went down to check it out – it was amazing,” she says.

The dining-room light fixture she found online from a Toronto designer who salvages diseased ash trees and creates functional art from them. In keeping with the wood theme, pressed-bark wall hangings create the backdrop for the Feasbys’ treasured art pieces.

Furnishings throughout the home are a blend of well-worn and loved wooden farmhouse pieces with contemporary European designs.

“This is our forever home, at least until our knees get sore and we can’t do the stairs anymore, so we really designed it thoughtfully,” says Feasby. “We really like every room and the house totally works for our family.” 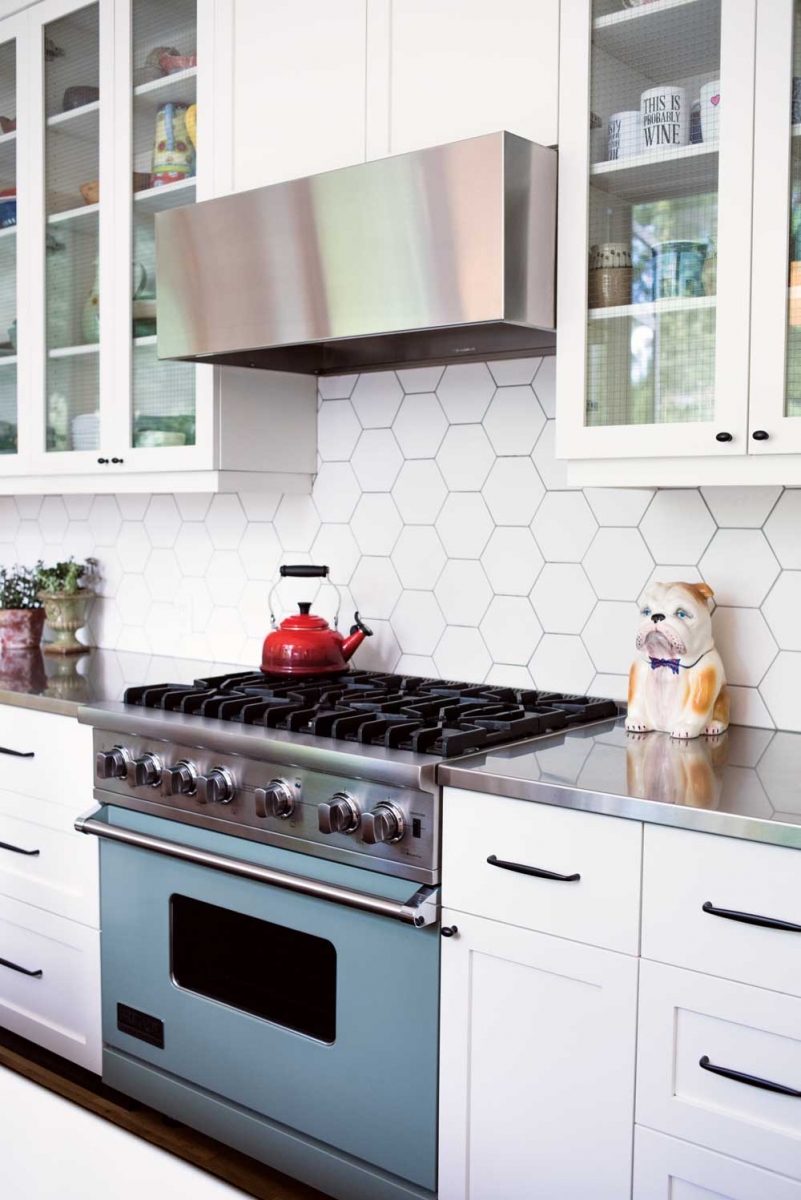 The jade-green oven in the kitchen exemplifies use of colour for artistic impact. 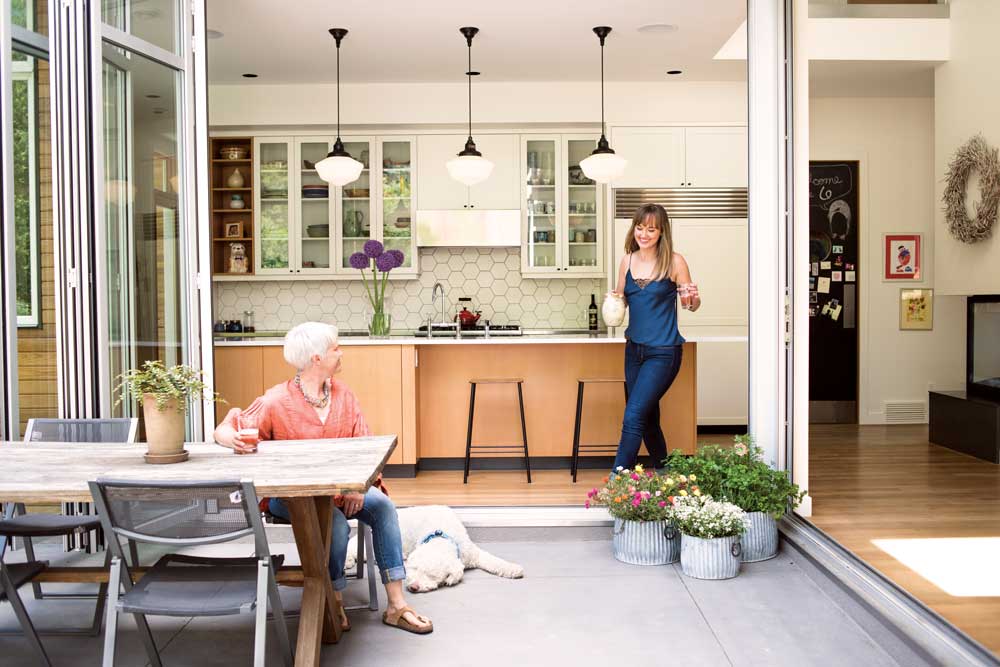 A line of floor-to-ceiling glass accordion doors, called a NanaWall, creates indoor-outdoor flow between the kitchen and patio.

The home’s outdoor space was designed to make the most of the lot’s mature trees. 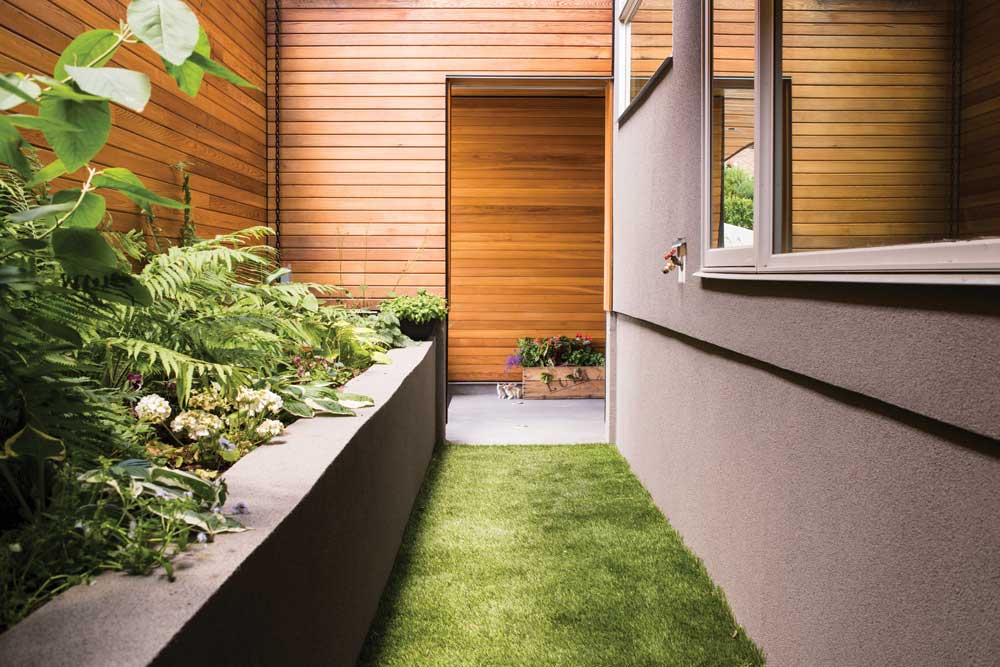 The intimate “secret garden,” visible from the window of the home gym.

Let the light shine in

Becky Feasby loves to garden. It’s one of her passions. So when it came to her home, the beauty of nature had to be an inherent design element – one that spilled into the interior spaces, creating indoor-outdoor synergy.

Feasby envisioned a secret outdoor garden, hidden away and yet visible from many angles and places inside the home. “I wanted this tantalizing space that you could peek into as you walked up to the house, and a pretty garden that you could look down over when you were in the house – one that was tucked away. I can grow lots of things in there. It is probably a zone warmer than the rest of the garden and I put artificial turf in there to make it look a bit kitschy,” she says.

Throughout the home, the architecture bridges the inside and outside spaces. “The NanaWall (a line of accordion-style folding glass doors that runs the length of an entire wall) was a big thing on the must-have list,” says Feasby. “I didn’t know what it was called at the time, but I knew that I wanted the whole inside corner of the home to open to the backyard; it is such a phenomenal property. We have it open all of the time as soon as it gets to be 10 or 12 degrees.”

Riedl explains that the vision was to create a home that was open and connected but still had private areas. “We wanted the inside to become the outside and for it to all flow into one. That can be a bit tougher to do in Calgary because of the weather, so often we rely heavily on visual techniques.”

To do this he used natural light to blend everything together. A skylight in the pitched ceiling allows ambient light to flow from the top floor to the main level of the home. “Now it feels as though the house is on an entirely different lot,” says Feasby. “In the old house we had to have the lights on all the time, and now we never turn them on.” 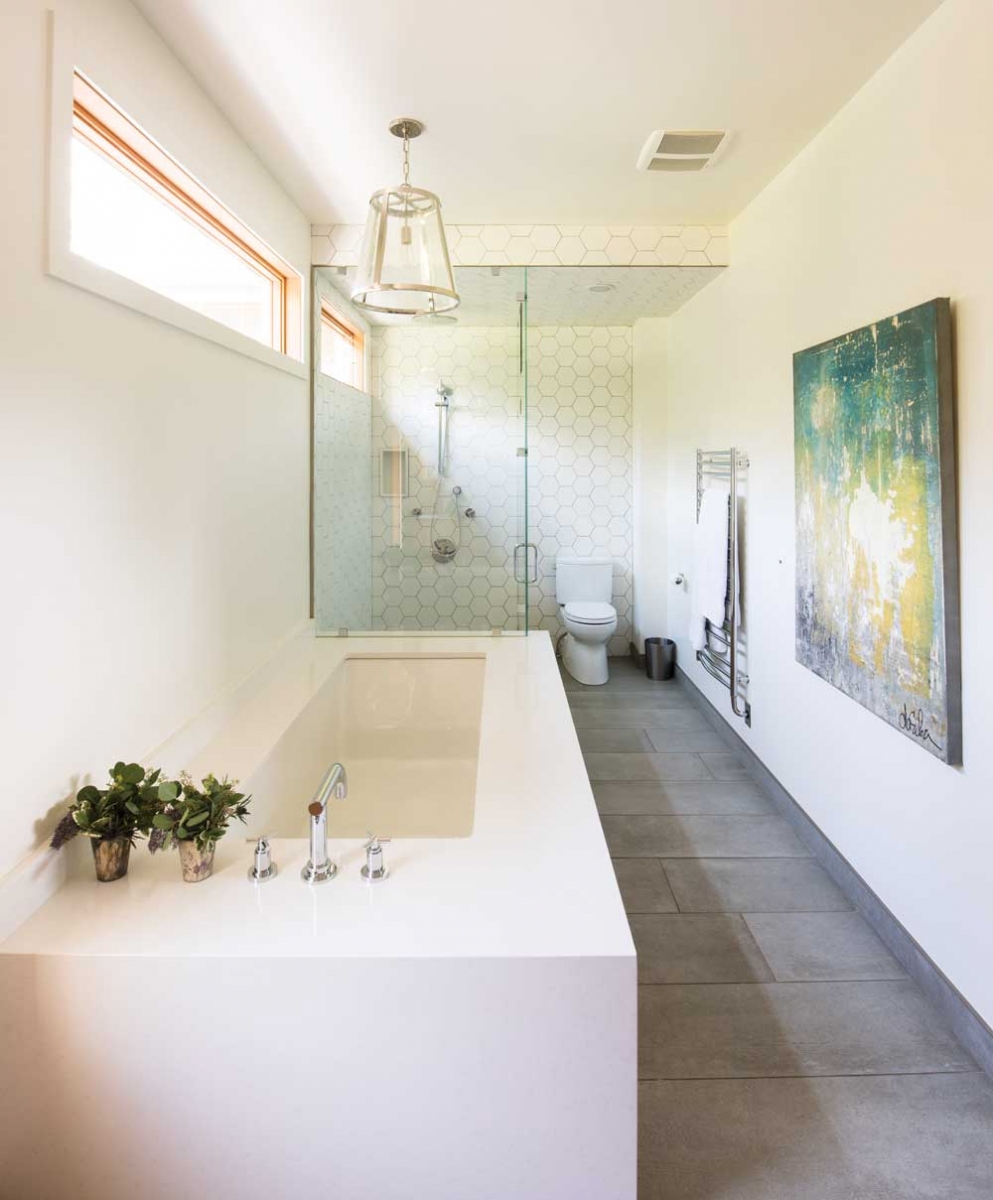 Clean lines and artwork create a serene space for bathing. 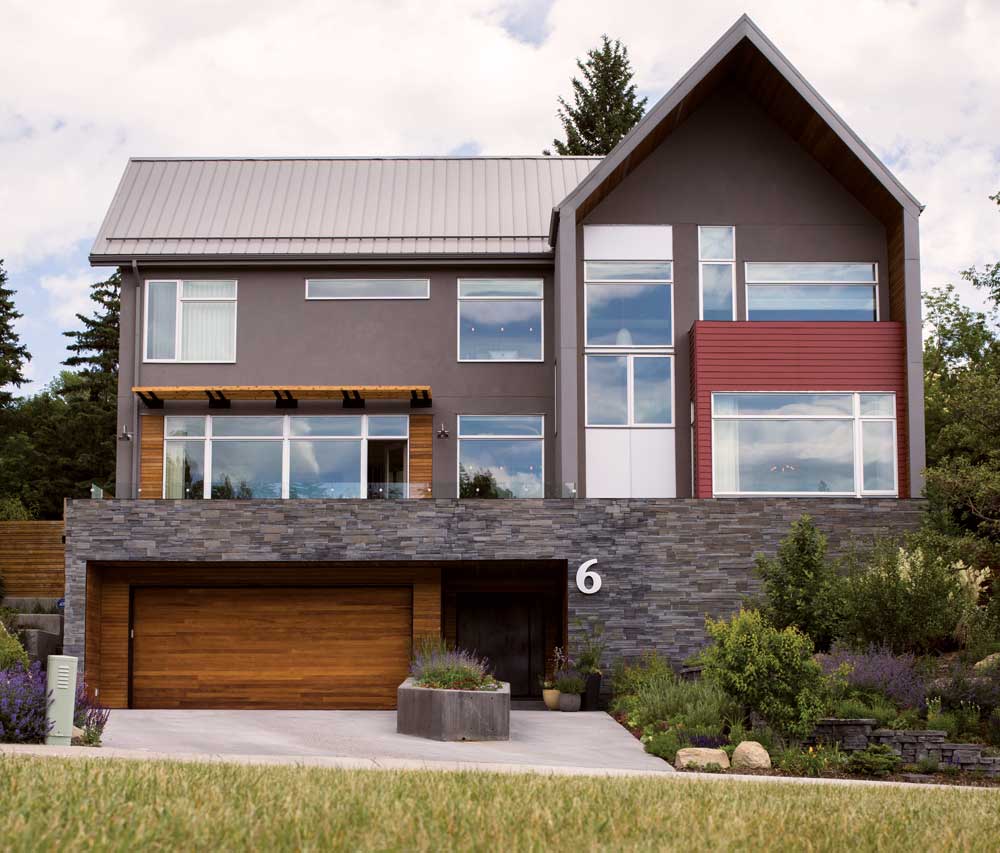 The home’s unique design was an answer to the challenges presented by the sloped lot.

Key architecture and design elements of this home 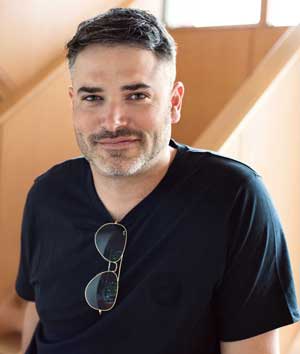 1. To make the most of the sloped lot, the volume of the home was set upon a plinth (base) and differentiated from the plinth through materials and massing, with the upper levels designed in a T-shape.

2. The commanding seven-foot-by-five-foot front door on the ground level is crafted from rolled steel and pivots to open.

3. The exterior materials – sawn-face rundle stone, metal and wood – were sourced in neutral tones to create a peaceful, countryside feeling.

4. Inside the home, a backdrop of wood and white allows for personal items to bring colour to the space.

5. Walk-in closets with plenty of built-ins in each bedroom free up space for furnishings and create room to breathe.