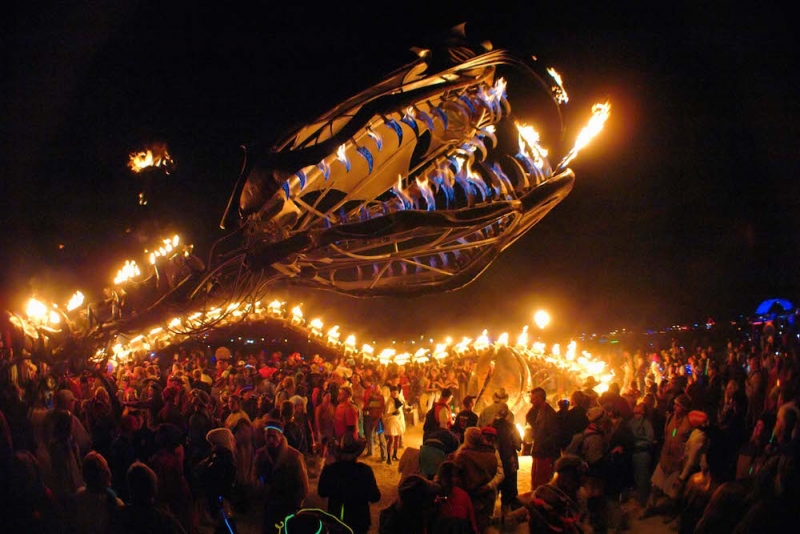 Calgary’s annual Beakerhead festival celebrates the fascinating, mysterious and sometimes quirky nature of the arts, sciences and engineering. This year, it returns from September 13 to 17 with more than 60 science, arts and engineering-related activities and exhibitions to check out. Here are five of the coolest events you won’t want to miss this year.

Check out a building stuffed with 5,000 balloons

The Royal Canadian Legion’s #1 branch will have some unusual occupants during Beakerhead – 5,000 biodegradable white balloons, to be exact. Nucleation is an art installation by Maria Galura, who attached the balloons to the building in such a way that they look like they’re overflowing out of and around it. The installation will be set up throughout Beakerhead, but plan to visit at 3 p.m. when you can actually take some of the balloons home with you.

This fiery art piece promises to be one of the most photographed installations at Beakerhead this year. Serpent Mother was created in San Francisco by local artist group Flaming Lotus Girls and is essentially a 168-foot-long serpent made of steel. The serpent’s spine features propane poofers that emit flames, and there’s also a metal egg that opens up and blows fire. Visitors can interact with the installation by pushing on buttons and using controls to control the fire and move its head. While the installation will be set up at Fort Calgary throughout Beakerhead, you’ll have to stop by in the evening to get the full lit-up effect. There are fire shows on September 13, 14 and 15 at 8 p.m. and 9:30 p.m., and on September 16 at 8 p.m., 9 p.m. and 10 p.m.

Escape from a six-storey locked room in a library

Think you’re an escape room master? Put that claim to the test at the Locked Library, a six-storey, intergalatic-themed locked room experience inside the Central Library. The event takes place on September 15 from 7 p.m. to 10 p.m., and will feature 1,000 participants navigating their way through the building’s six floors. Groups of four are recommended, so you can either sign yourself and three friends up or join other smaller groups. The first team to escape the locked room will win a prize. Tickets cost $40, with funds going towards the Calgary Public Library.

Whether you’re a child or simply young at heart, swing by the RiverWalk area at 6th Avenue and 6th Street to ride one of the 15 teeter-totters that are part of Beakerhead’s Impulse installation. These aren’t your average playground teeter-totters though. In addition to being giant-sized, they light up and produce sound when you ride them. You can ride the teeter-totters throughout Beakerhead, but a nighttime visit will offer the best illuminated experience.

Use an industrial-sized claw to pick up prizes

Remember those claw arcade games where you would use a controller to try and pick up stuffed animals? This is basically that, only giant sized. Set up in Eau Claire Market, participants get to control an industrial-sized metal claw and try to pick up prizes with it. Claw is open on Sept. 13th to 15th from noon to 8 p.m., Sept. 16th from 10 a.m. to 8 p.m. and Sept. 17th from 10 a.m. to 6 p.m.