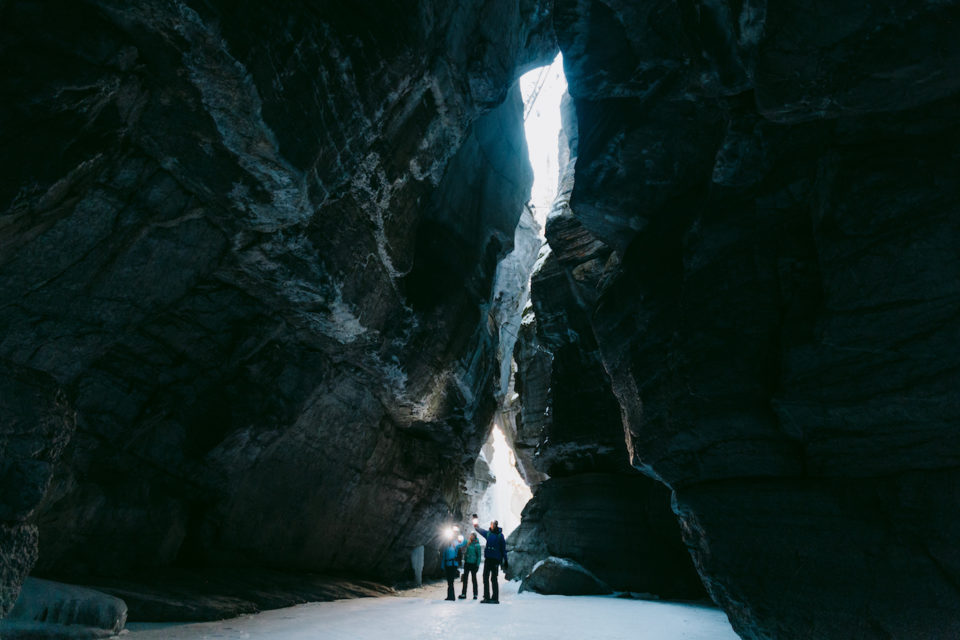 Guided icewalk tours through Maligne Canyon in Jasper National Park happen three times daily during the winter, including headlamp-lit "After Dark" tours. Icewalk groups are capped at 12 participants and finish with a post-walk hot beverage and snack at the Maligne Canyon Wilderness Kitchen restaurant. Photo by @mikeseehagel/Travel Alberta

Get into the Spirit of the Maritimes at Castle Mountain Resort

Castle Mountain Resort tips its cap to the folks of Eastern Canada with Maritime Night on Saturday, February 1. Taking place in the resort’s day lodge, the party kicks off with a dinner of fresh mussels and lobster (there’s also a prime rib option for those who can’t/don’t do seafood) followed by dancing to live music by the Celtic band Fraid Knot. Dinner is served at 7 p.m. with the dance at 9 p.m. Tickets are $84.95; $24.95 for kids 12 and under; $15 dance only, available through resort guest services.

The Jasper Beer and Spirits Festival runs through the weekend of February 1 and 2 at the Fairmont Jasper Park Lodge. The festival can be done as a weekend retreat, incorporating a variety of seminars and outdoor activities (think shinny on the pond with beer from Wild Rose Brewery and Jasper Brewing Co. or a snowshoe outing sponsored by Wild Life Distillery and Legend 7 Brewing Co.) Or, you can simply attend the Grand Tasting Evening Events, each of which will have a different lineup of craft beers and spirits to sample along with food prepared by the hotel. The VIP Retreat package includes hotel accommodations, while the Grand Tasting events on Friday, January 31, and Saturday, February 1, will have shuttle service between the lodge and downtown Jasper.

Do the Maligne Canyon Icewalk

If you’re making the trip out to Jasper, make time for a visit to Maligne Canyon, a striking geological feature that turns into a frozen wonderland during the winter months. The tourism experience company Pursuit runs three daily Icewalk tours: Early Light (timed to catch the morning “golden hour”), Afternoon and a headlamp-lit After Dark evening tour. The three-hour tours are limited to a maximum of 12 participants and include requisite gear of warm boots, ice cleats and helmets and include a post-tour warm beverage and snack at the on-site Maligne Canyon Wilderness Kitchen restaurant.

Enroll in an All Girls Snowboard Park Camp at Sun Peaks

Sun Peaks Resort near Kamloops B.C. is kind of a long trek from Calgary. However, it’s the closest location where you can take the Elleboard All Girls Snowboard Camp, a national program run by Snowboard Canada for female snowboarders to improve their park-riding skills. The Sun Peaks Elleboard camp is on Sunday, February 2, from 8:30 a.m. to 3:30 p.m., and the $92 registration fee ($75 if you have a Sun Peaks pass) includes coaching, lift ticket and lunch.

Enjoy a Night of Spelling and Trivia at the Whyte Museum

Each year, the Whyte Museum of the Canadian Rockies in Banff hosts a spelling bee and trivia contest, and while all the team spots have been filled for this year’s event on Tuesday, February 4, spectators are welcome to be part of the lively evening of competition and camaraderie, which kicks off at 7 p.m.

Ski for Heart at Lake Louise

The Heart & Stroke Foundation’s annual Ski for Heart fundraiser weekend returns to Lake Louise February 7 and 8. Participants who fundraise a minimum of $500 can take advantage of a special room rate at the Fairmont Chateau Lake Louise of $159 and join likeminded adventurers in a variety of heart-healthy outdoor activities, such as downhill skiing, cross-country skiing or snowshoeing as well as for après-ski events. For information on how to sign up, go to skiforheart.ca.

Mt. Norquay Ski Resort is steeped in history (see what I did there?) considering it’s been around for nearly a century. As such, the resort is celebrating this legendary longevity in a series of après-ski fireside chats throughout the winter season at the Lone Pine restaurant in the Cascade Lodge. Each chat is hosted by a “local legend” from the Banff region and includes refreshments and stories about Norquay’s past, present and future. This month’s fireside chats are on February 8 and February 29, with the February 8 event hosted by none other than legendary nonagenarian skier (and Norquay ski run namesake) Eddie Hunter, who has been skiing there since the 1930s. They’re limited to 20 participants, so sign up in advance, either in person at the resort, or by calling 403-762-4421.

Get Schooled in Snowmobiling in an All-Female Environment

Snowmobiling can be kind of intimidating for women, which is why it’s nice to get the chance to hone your skills in a supportive, all-female environment. Check out the Ladies Only Snowmobile Clinic taking place over the weekend of February 8 and 9 in Fernie, B.C., where you can get coaching and tips from Revelstoke-based snowmobile pro-rider Stephanie Schwartz. The clinic will cover subjects such as how to improve your throttle and brake control, how to use technique to get out of tricky terrain, and an avalanche rescue skills review.

Go To the Snow Rodeo at Winsport Canada Olympic Park

Winsport Canada Olympic Park is not in the mountains, but if you want to watch some of the top freestyle skiers and snowboarders in the world, then this is where you want to be February 14 to 16. COP is hosting its first FIS Freeski and Snowboard World Cup events in what they’re calling the “Snow Rodeo.” Events are free to watch and among the Canadian team riders expected to compete is Cassie Sharpe, X-Games and Olympic gold medalist in ski-halfpipe.

Take Your Yoga Practice to Infinity and Beyond in Banff

Contrary to how it sounds, Rocket Yoga does not involve doing yoga in outer space. It does involve following a set of specific yogic routines, based in the traditional Ashtanga sequences, that focus around the joints. You can take the Rocket Yoga ride in a three-day workshop, February 14 to 16, in Banff, led by Cincinnati-based Rocket instructor Amber Jean-Marie Gean.

14 Best Things to Do in Calgary This December