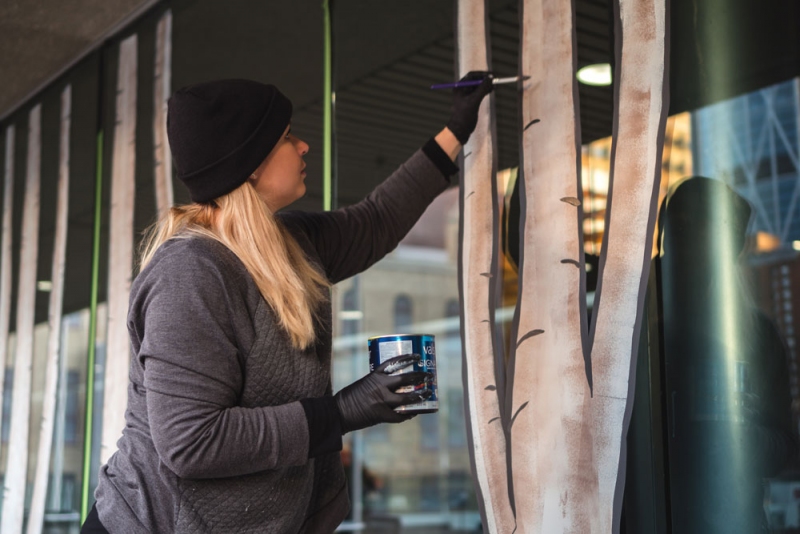 Six winter-themed window paintings at businesses along Stephen Avenue are changing the way we engage with urban artwork.

The seasonal works are part of the Northern Reflections Window Exhibition on until December 31. It’s organized by Buds of Buds, an art collective that creates opportunities for local artists who work in various mediums. What’s more, each window display is compatible with augmented reality (AR) technology to be experienced through Buds of Buds’s free Augle app.

The organization put on a similar exhibition during this year’s Calgary Stampede during which local artists created window paintings to reflect Alberta’s heritage. Northern Reflections is the organization’s first go at AR.

To create each piece, a painter or illustrator collaborated with an animator (with the exception of one artist who acted as both) and the local business to create artwork that reflects the theme of winter memories in Canada. The animation was then integrated into AR by Buds of Buds.

Watch how The First Snow window came together:

“I’ve always found it very interesting how AR can interface with our city and create something whimsical and magical that becomes an attraction,” says Katie Pearce, creative director and founder at Buds of Buds.

The Augle app is easy enough for anyone with a Smartphone to use. Click on “murals” to see the locations of the windows and read a little bit about the artists’ inspiration. Activate the AR camera and point it toward the window to see the painting come to life with things like moving animals and twinkling lights. It’s the same technology that’s used in Snapchat filters to create different sights and sounds against a real-life background.

Jennifer Jacoby, a Buds of Buds member and painter of The First Snow window, says she had to think more dynamically in terms of how the painting would eventually come to life.

“If you’re doing a tour or you’re walking by with your friends and you see that it has this kind of [AR] capability, I think what it does is it gets people talking about how art can coexist with an urban environment,” she says.

Jacoby adds that it’s also important the windows stand alone as pieces of artwork without AR, as not everyone has access to the technology.

Over the course of the exhibition, viewers will be able to vote for their favourite window through the app. The people’s choice award comes with an $800 cash value.

Buds of Buds plans to bring back the exhibition next winter and the organization is currently planning for an AR sculpture garden downtown in summer 2018.