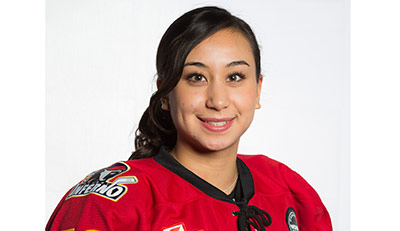 After a sputtering start to the 2013-14 Canadian Women’s Hockey League season, the Calgary Inferno is beginning to generate some real heat. The team is riding a three-game win streak into this weekend’s home series against the league-dominating Montreal Stars.

Now holding down third place in the five-team circuit, the Inferno is playing much better than its 6-8-1 record would suggest. And with four teammates representing Canada at the Winter Olympic Games in Sochi, there’s even more reason to be excited about the women’s game.

“We’re excited for the girls, and happy for them,” says Inferno forward Rhianna Kurio, above. “We’re hoping for gold again.”

If their hearts are with their Olympian teammates, the Inferno players’ minds remain focused on the CWHL season and making the Clarkson Cup playoffs by staying out of the league basement, currently occupied by the Brampton Thunder.

Of the eight Calgary losses to date, only one was by more than three goals (a 7-1 home-ice drubbing by the Toronto Furies on Dec. 1), and four were by a one-goal margin. So it was just a matter of time and hard work to turn those narrow losses into victories.

“It feels pretty good,” says Kurio, a strong-skating playmaker whom coach Tim Bothwell recently moved from centre to right wing. “I think we’re in a good position now to make the playoffs. The last two games (in Brampton) were really important and we were able to win those, so that was good.

“We’ve been playing well, so hopefully we can keep it going.”

Kurio, 22, was born and raised in Calgary and played hockey at Union College in New York while earning a degree in neuroscience. She and defenceman Jessica Wong agree that avoiding penalties will be the key to competing with the 11-1-1 Montreal squad.

“That’s one thing we need to focus on – staying out of the box,” says Cape Breton-born Wong, also 22, whose return after a lengthy injury-related absence coincided with the start of the Inferno’s recent winning ways. “They’re a great team all around – they have great players.”

Wong, above, singles out Stars forward Emmanuelle Blais as someone to watch, while Kurio points to forward Sarah Vaillancourt and hard-shooting 5’11’ defenseman Cathy Chartrand.

Wong played university hockey at Minnesota Duluth, and represented Canada in under-18 and under-22 tournaments, winning silver and gold respectively. So she knows a little something about the international game, and what Team Canada is going through.

“I’ve had lots of fun and learned lots, and got to see some of the world. You’ve got to enjoy it and embrace it, and realize you’re very fortunate.

“I have lots of friends on the national team. They work hard for months and barely get any breaks, but it’s something they’ll always cherish.”