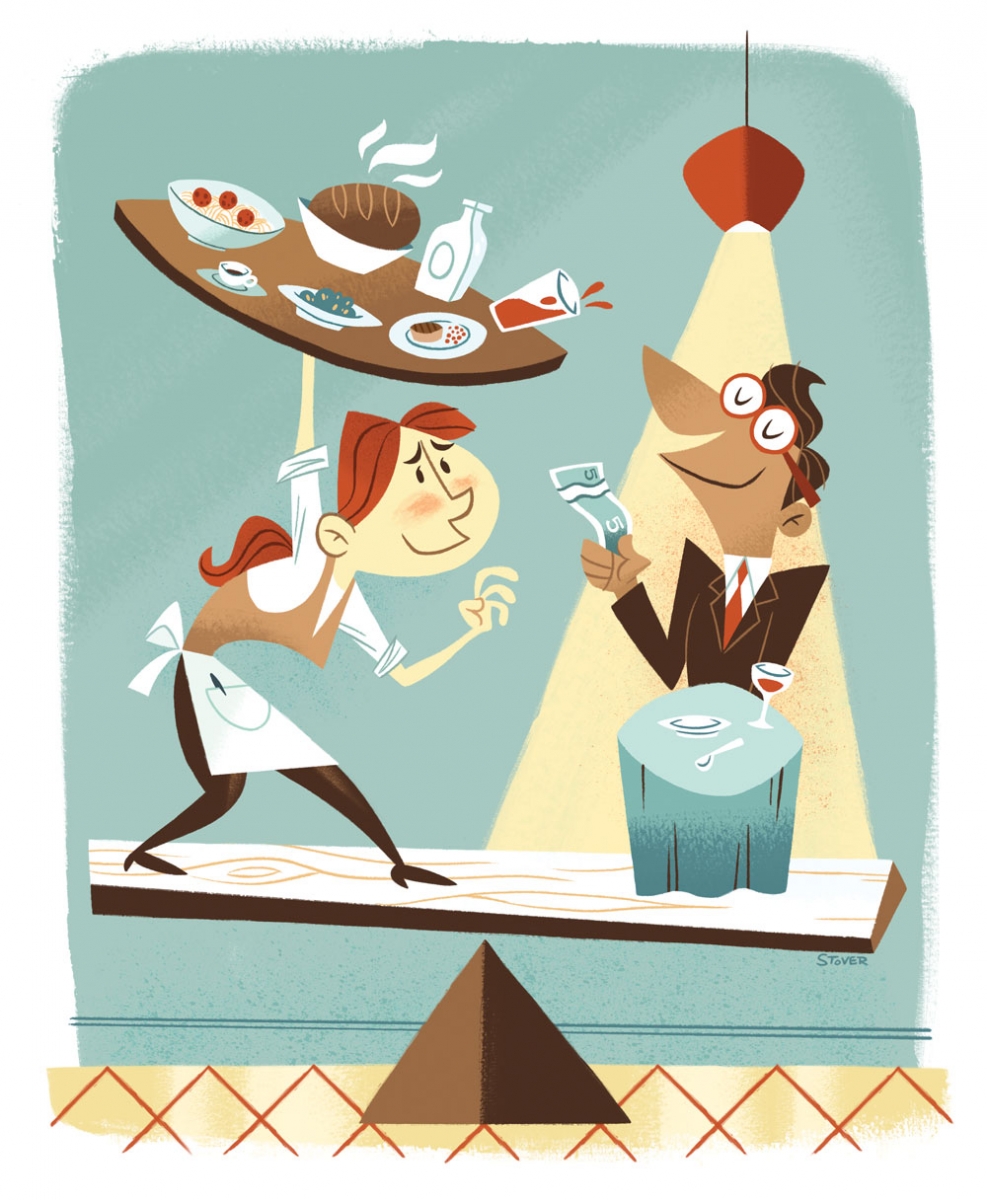 Can Calgary Restaurants Ever Do Away With Tipping?

Intended to both reward and motivate good service at restaurants, tipping may not be doing what it’s supposed to, which calls into question whether we should keep doing it.

When David Jones, owner of Parksville, B.C.’s Smoke ‘N Water restaurant, decided to ask patrons to stop tipping his servers, he figured his summer-long experiment would blow the doors wide open on what he says is a “broken business model.”

For three months in the summer of 2014, he increased both the prices on his menu (by about 18 per cent) and the wages that his staff receives (about $20 per hour for servers, $16 for cooks). “It was great, staff-wise, and the response from our guests was positive,” he says.

News of Jones’s experiment spread across the country fast – Canadians jumped on the idea of a living wage for servers that cut the responsibility to tip. Still, not one other Canadian restaurant owner was in touch with Jones to ask how it went.

It is common in North America for servers to earn minimum wage (which is arguably an unlivable wage) or less (many provinces, including Alberta, have a lower minimum wage for liquor servers) and supplement that with tips. Tips are most often viewed not as a bonus, but rather as an incentive-based way to ensure good work, as well as a sign of good manners on the part of the diner.

For many, tipping is surrounded by uncertainty. Some customers secretly loathe the suggested tip percentage buttons that are now so common on debit and credit machines. Some think a 10 per cent tip is just fine, despite the industry norm falling between 15 and 20. And, in general, there is very little knowledge surrounding how, exactly, tips work at the restaurants we frequent.

In Calgary, most restaurants pool tips to some extent at the end of a shift. So far, there do not seem to be any alternative tipping systems like the Smoke ‘N Water experiment. Along 17th Avenue, at Ox and Angela, a wine and tapas bar, servers “tip out” a percentage of their sales at the end of the night. That amount is then evenly divided among everyone involved in service that shift, including dishwashers, cooks, hosts and the manager, who takes an on-the-floor role.

“One of the highest expenses for any restaurant is labour,” says Jayme MacFayden, owner-operator of Ox and Angela. “If, overnight, we just abolished tipping, you wouldn’t be able to hire front-of-house staff at minimum wage and demand a certain amount of professionalism from them.”

MacFayden says she’s done a lot of travelling and has visited a lot of restaurants for research and thinks North America’s tipping culture (not always present in other countries) creates an elevated dining experience.

At Hotel Arts, service staff also use a tip-pooling system. Warren Flemming, a former beverage manager at Hotel Arts’ Yellow Door Bistro, who now works as a restaurant manager for the Hotel Arts Group’s Chef’s Table, says the price of the food is too closely linked with tipping to consider changing the system.

“The cost of paying the staff is shared between the employer and the guests,” says Flemming, who believes it wouldn’t be cost-effective to do away with tipping. “I’d have to pay [servers] more to be here, and if I pay them more the cost of the food will go up more than what the tip percentage would have been.”

Hotel Arts handles the actual doling out of the tips by dispersing the money from cash tips between staff at the end of the night. Tips punched into payments on debit and credit cards are paid out every three days or so. And each of the Hotel Arts Group’s restaurants keep logs of the tips so that employees can review them if they want. 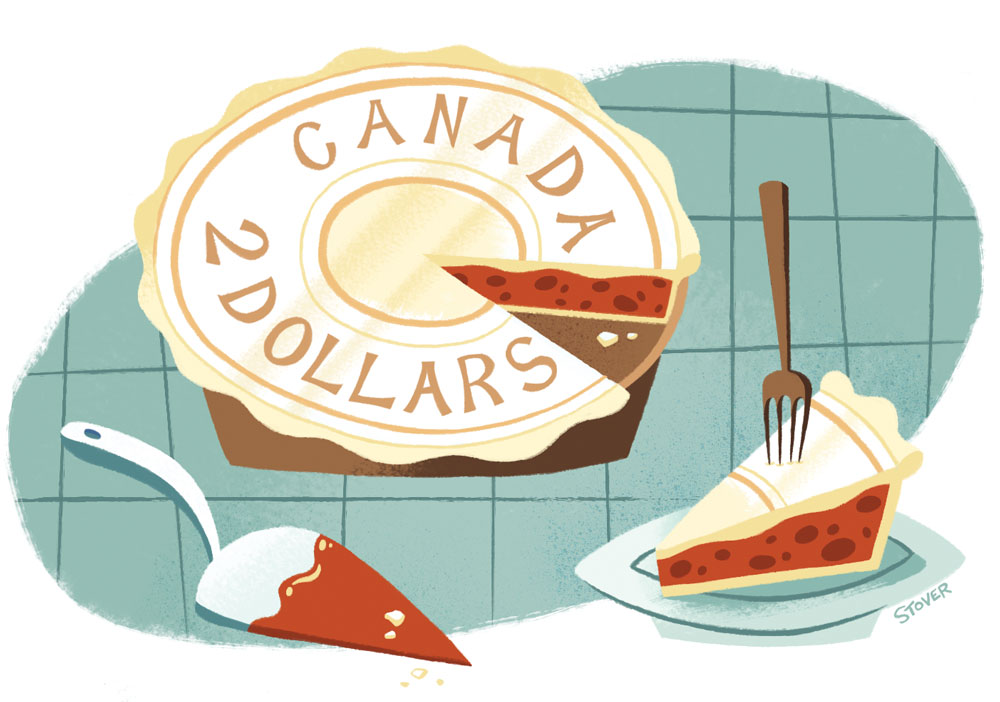 While most restaurants use some sort of pooling method to handle their tips, most pubs and bars operate on a “you earned it, you keep it” system. That’s because the job is so different for those servers – less of the work is handled by the kitchen, the servers work very late and the latest shifts are premium, saved for the best servers. This may give some bar servers the feeling that they are more in control of their tips, but that might be an illusion.

He points to research done by Michael Lynn, a professor at Cornell University’s School of Hotel Administration. Lynn found the quality
of service tends to affect tips less than outside factors do. Was it sunny outside the day you were dining? Your tip could be a bit higher than normal. How did the big date go? If it went poorly, your server shouldn’t count on a good payday.

“[Tipping] doesn’t actually function as a reward for good service, and it doesn’t seem to motivate giving good service,” says Dick. “We’re actually leaving 50 to 70 per cent of a server’s wages up to a whim of how someone feels at the end of a meal.”

In fact, tipping hints at a larger power structure, but one that may not work the way we think it does.

“We’re all really gripped by the idea that we’re evaluating our servers, and convinced that there is motivation between [this] power and the tip,” says Dick. But Lynn’s research has shown that tipping is tied to the demographics of the diner and the server, and can be discriminatory at its worst – for instance, Lynn’s research shows that blonde female servers tend to get bigger tips, regardless of the quality of the service. His research also indicates diners may give a female server a larger tip if they perceive her to be attractive, but that attractiveness in male servers doesn’t affect tips.

In Europe, tipping fell out of favour because it was considered to be contributing to a power imbalance.

“People were against it, historically, because they felt that in a democracy it encouraged classism,” says Patti Derbyshire, chair of entrepreneurship, marketing and social innovation at Mount Royal University. “Aristocrats would tip the lowly service … it’s a power dynamic.”

This sentiment is echoed by Karen Kho, the service director at Teatro Group, but is stated as a positive. “The power should always be in the guest’s hands,” she says.

And that power dynamic is different in restaurant service compared to other industries where tipping is common practice. For example, at a salon where a client repeatedly returns to the same hairdresser, tipping goes beyond job performance on one particular visit, it also attempts to gain favour for future visits. Likewise, tipping a cab driver is, in part, a recognition of the admittedly brief relationship forged, as well as the specific service. In both of these industries, the person getting the tip is also the one directly providing the bulk of the experience and service. When it comes to restaurants, it is often hard to develop a personal relationship with a server, even at a restaurant that you may visit frequently but which could have between 20 and 30 employees.

The driving force behind maintaining the tipping status quo seems to be that we haven’t yet reached a popular-opinion tipping point. MacFayden says she understands the push to provide a more-equal, less-volatile structure for paying employees. “From a business owner’s perspective, I’d like to operate a business that way, but you’d have to raise your prices,” she says, which would give other restaurants the appearance of being more affordable. “So unless overnight we’d decide to act collectively, it wouldn’t work.”

The experiment at Smoke ‘N Water drew to an end last fall – Jones has since reverted back to the tipping system.

“We were giving 15 per cent of gross sales, split between the front and back of house, depending on how many hours they worked.
It was killing me. We raised the food prices and we about went bankrupt,” he says.

But, with a bit more planning, Jones says he’ll go back to the model one day soon. “I was two to five years ahead of my time on this,” he says. “There’s nothing wrong with the model.”

Dick describes the situation as a “collective action problem.” He thinks it’s a great idea to get rid of tips, but the reluctance to do so is bound up in the fact everyone else isn’t doing it. “If [tipping] was outright banned, at a government level, that would solve the problem immediately,” he says.

Until then, each diner and each server struggles on, trying to do the right thing in a system that isn’t really doing what it’s supposed to do but seems to work well enough to keep it going.