The Calgary Wildlife Rehabilitation Society (CWRS) is a non-profit charitable organization that rescues and rehabilitates orphaned and injured wildlife. Essentially a specialized veterinary hospital, the professional veterinary staff and trained volunteers provide medical care, food, shelter and rehabilitative treatment to all sorts of wild creatures. Their ultimate goal is to release their patients, fully recovered, safely back into the wild as soon as possible.

If you find a wild animal that you suspect is injured or orphaned, your first step should be to call the CWRS or visit their website – staff and volunteers will help you determine if an animal requires intervention, and provide advice on what to do.

We toured through the facility to meet some of the residents, both permanent and temporary.

Wildlife Technician Britany Downey feeds a tiny meal to a tiny orphan squirrel. These little ones require a meal of their special squirrel formula about every two hours, so staff take the babies home with them at night to keep up the feeding schedule. If all goes well they’ll be ready to go back to the wild at about 12 weeks old. 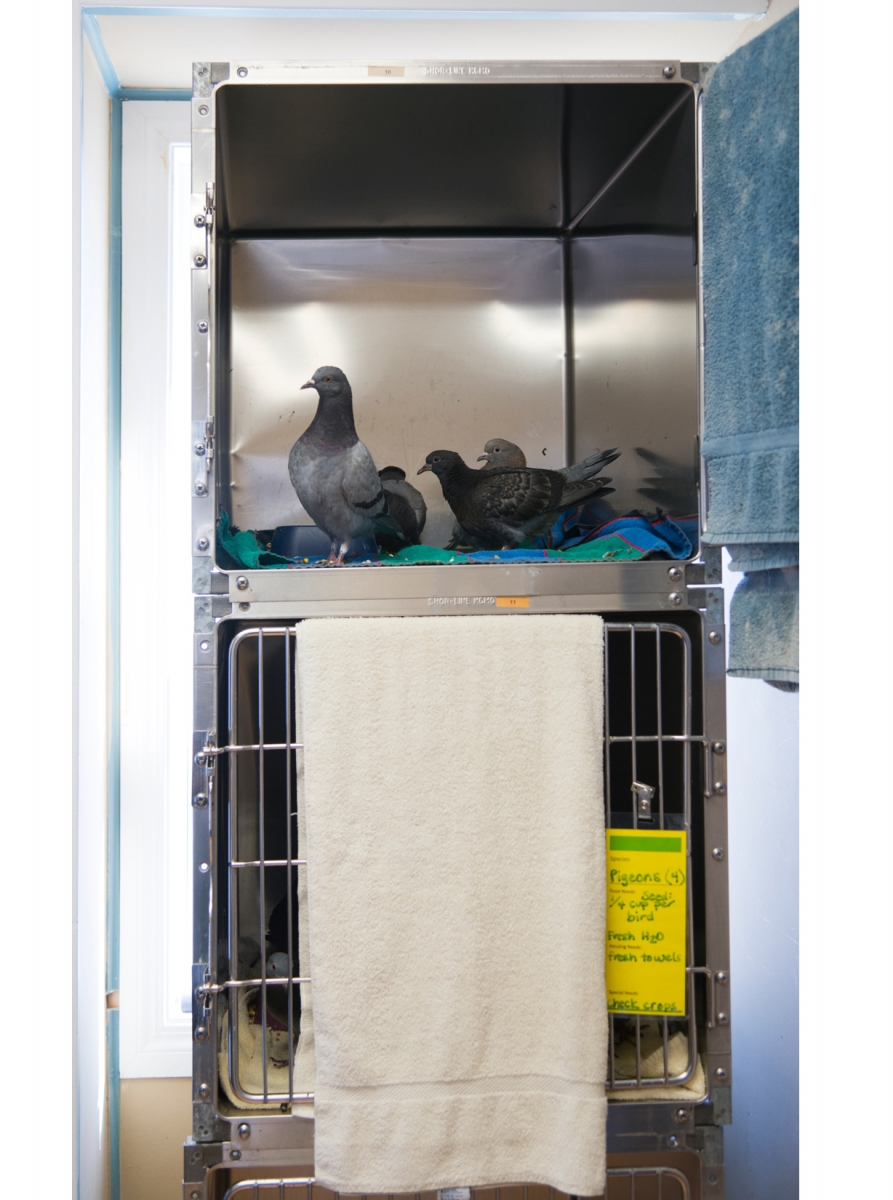 The CWRS deals with a lot of animals that other centres won’t take. This might mean working with animals that aren’t quite so glamorous – think pigeons, magpies, and squirrels – but these are still wild animals, executive director Andrea Hunt explains. Because CWRS is primarily a wildlife hospital and not a conservation organization, it provides care to all wildlife, no matter what species. 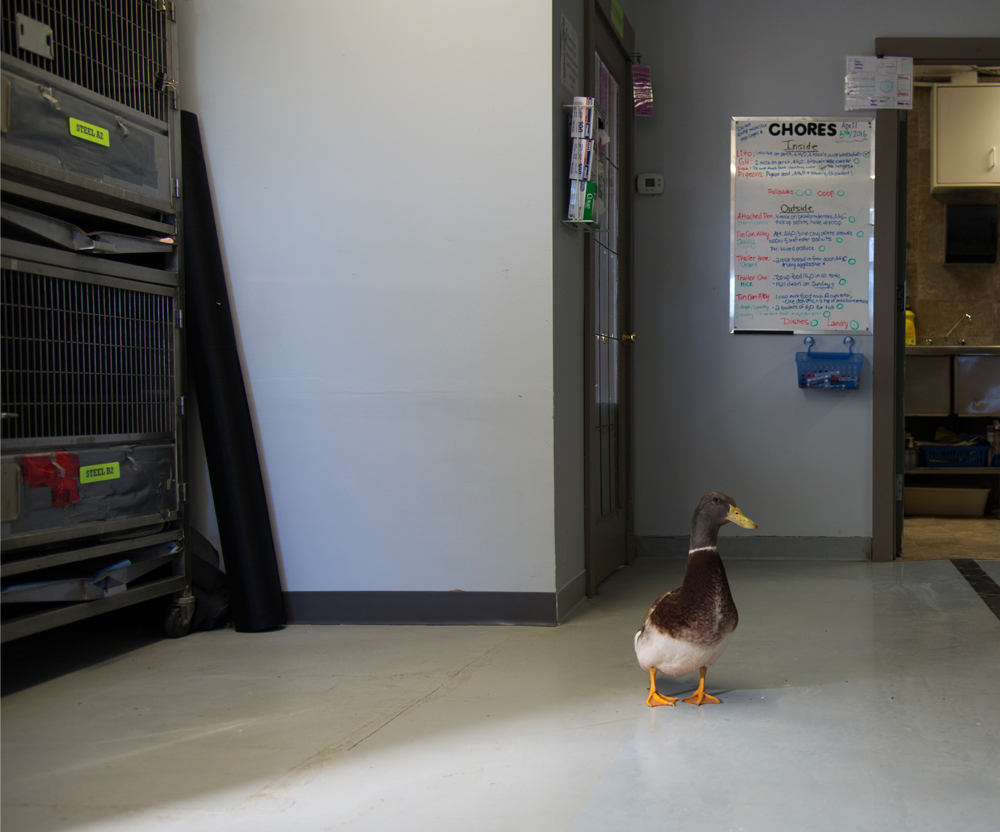 Sax (a Saxony duck) arrived at the CWRS a couple of weeks ago. He was raised as an indoor pet by a family for about a year, but the family decided to give him up, so he was brought to the centre to be rehomed. Unfortunately, Sax’s unusual upbringing means he isn’t a very duckish duck (he doesn’t much care for water and is apprehensive about going outdoors). If he makes a good foster dad, he may stay on at the centre or he may be able to find a new home on a farm. 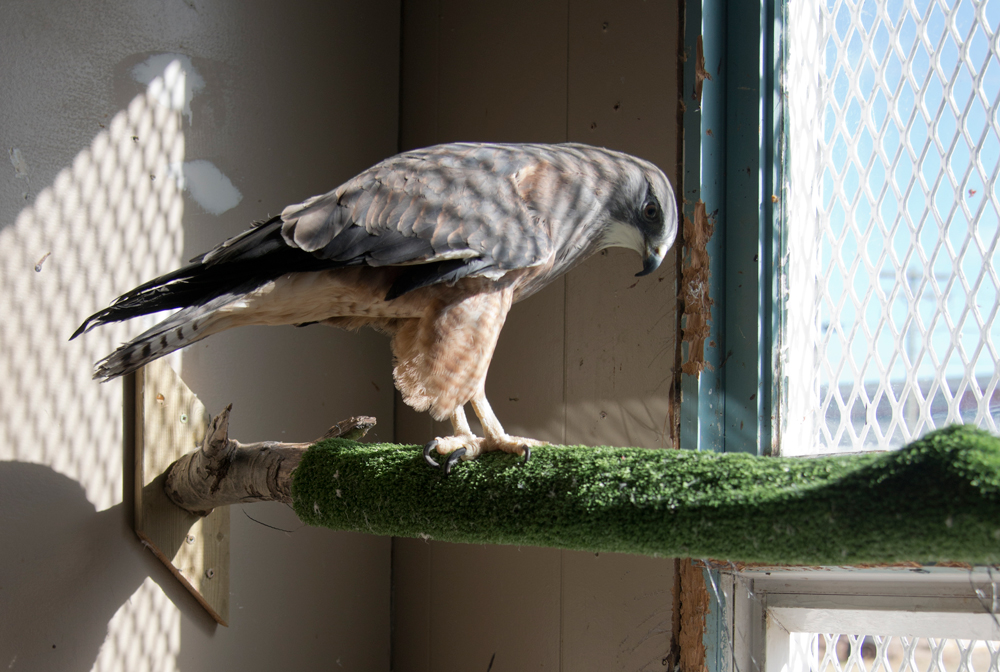 Some animals arrive at the centre with injuries that even when healed leave them unsuitable for release back into the wild. Lito, a Swainson’s Hawk, is one such animal, so he is a permanent resident at CWRS. Because of his good temperament, he is also an educational ambassador, visiting local schools as part of CWRS’s outreach program that teaches students about wildlife. In the wild, Swainson’s Hawks are migratory, spending the winter in warmer climes. Lito spends the winter indoors here, moving to an outdoor pen when the weather warms up. 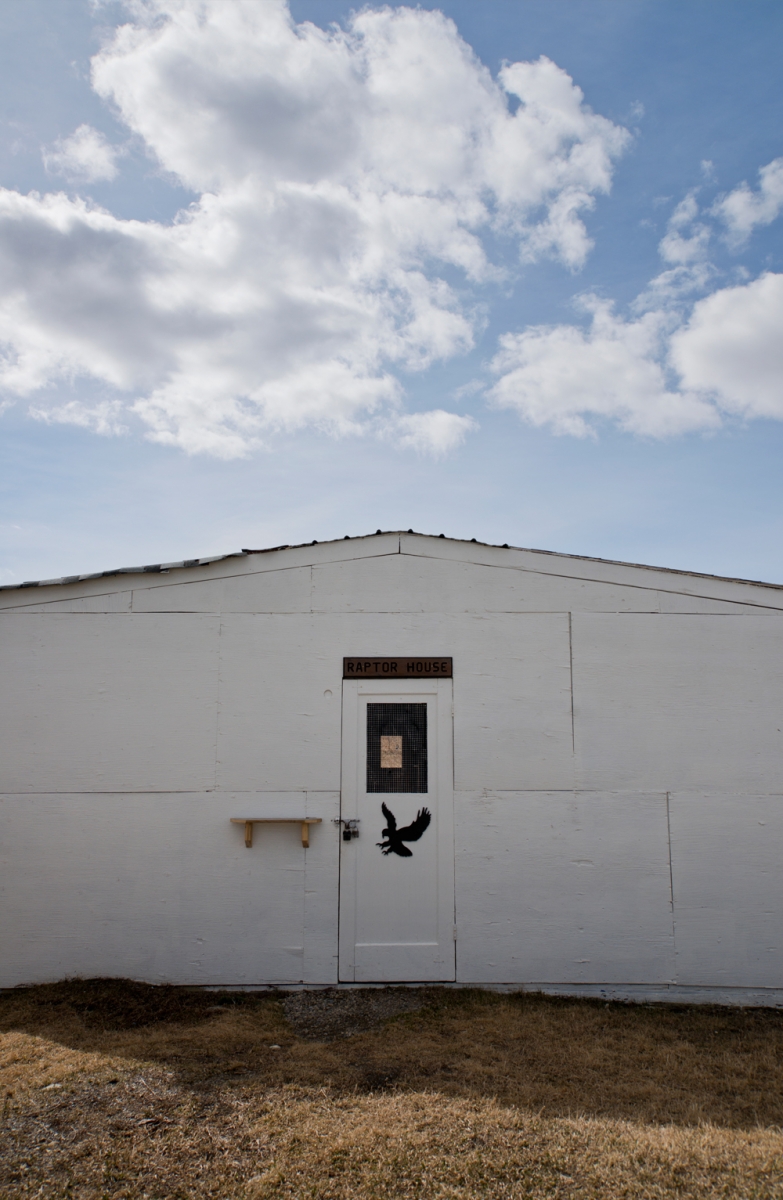 This is the Raptor House, a large flight pen where birds like Lito have a chance to spread their wings and get some fresh air. 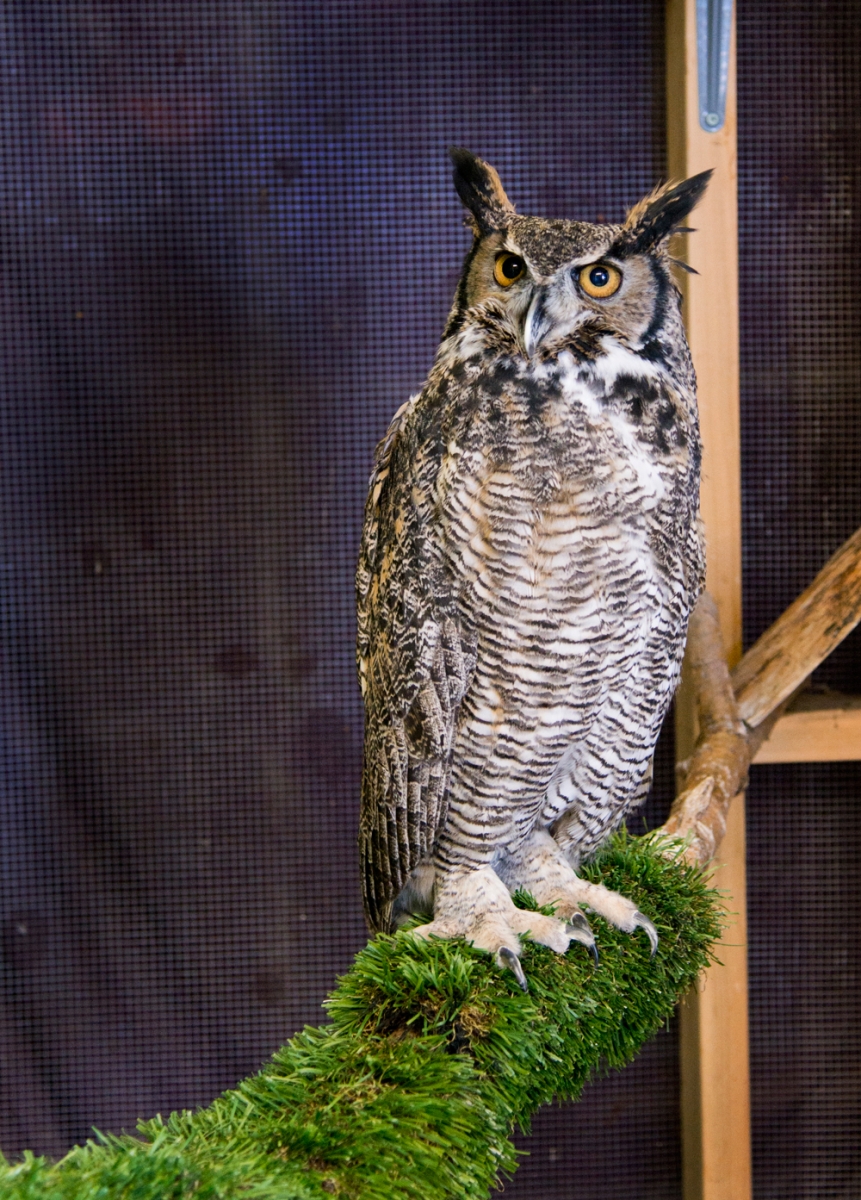 G.H. is a 23-year-old Great Horned Owl and one of the permanent residents at CWRS. Now retired from a long career as an educational ambassador, he still works as a foster dad. The extraordinarily long-lived G.H. is remarkably nurturing, often seen tearing meat into bite-sized pieces for the baby owlets in his care, and generally teaching them all the necessary wild owl skills they’ll need when they are released into their natural habitat. 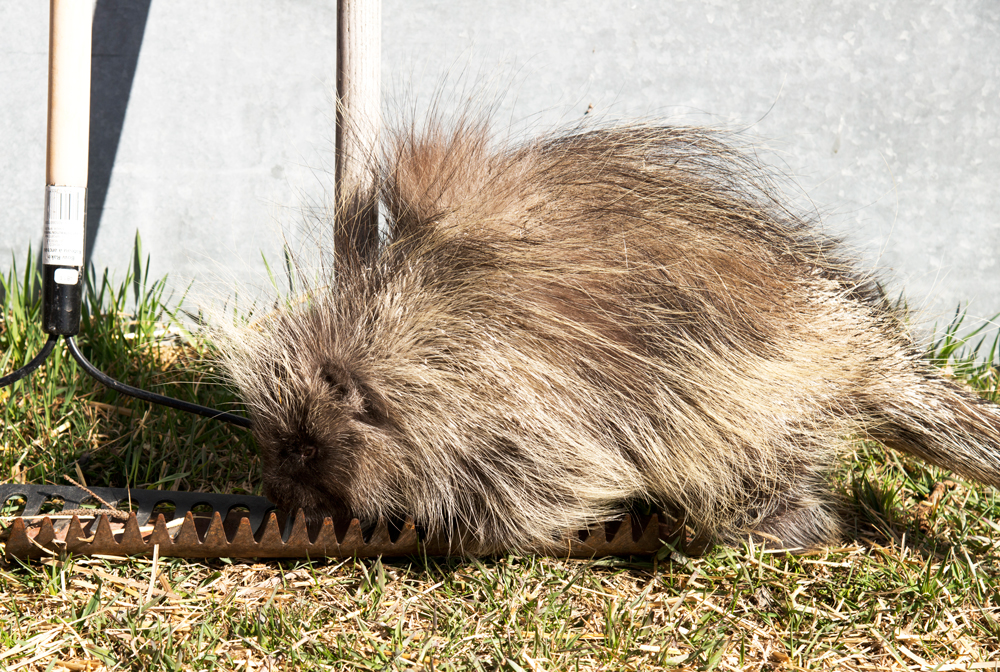 Permanent resident and ambassador Quillimena the porcupine (Quillie for short) takes a stroll in the sunshine outside her house. 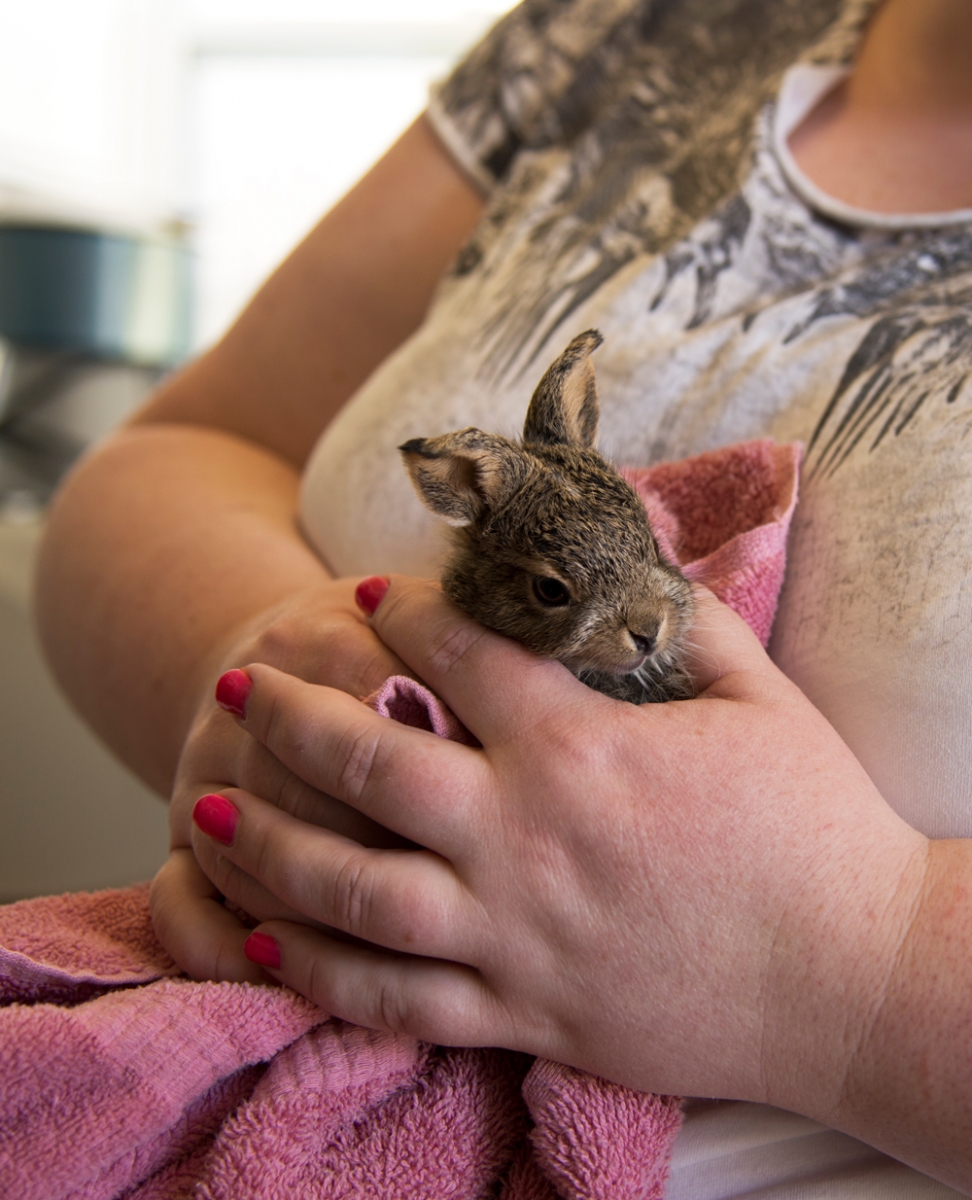 Springtime brings lots of baby animals like this White Tailed Prairie Hare to the CWRS. Animal care operations manager Jenna McFarland (holding this little one) explains how important it is to contact CWRS before intervening with these babies, since it’s perfectly normal for animals to leave their young for extended periods of time. While it may be almost unbearably tempting to ‘rescue’ these little creatures, in fact their parents have probably just hidden them for the day, going off to forage for food, and will be coming back with supper in the evening. 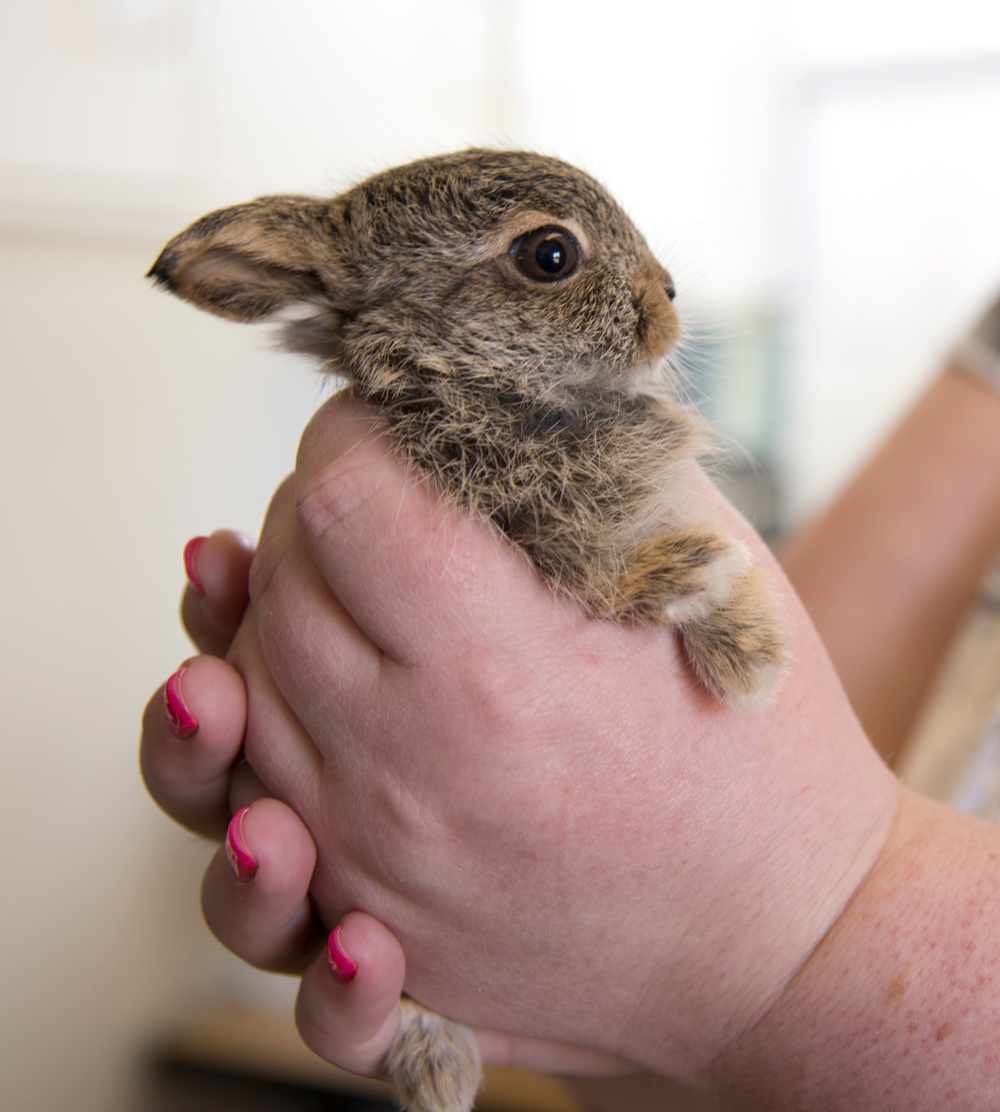 Since they are prey animals in the wild, baby hares and deer are extremely sensitive and easily stressed. They should only be moved (as short a distance as possible, to the nearest cover) under the direst circumstances, if their parents leave them somewhere dangerous. Always call CWRS for advice before intervening. They’ll be able to tell you if what you’re seeing is normal animal behaviour or cause for concern. Their motto is “See a hare, leave it there!” 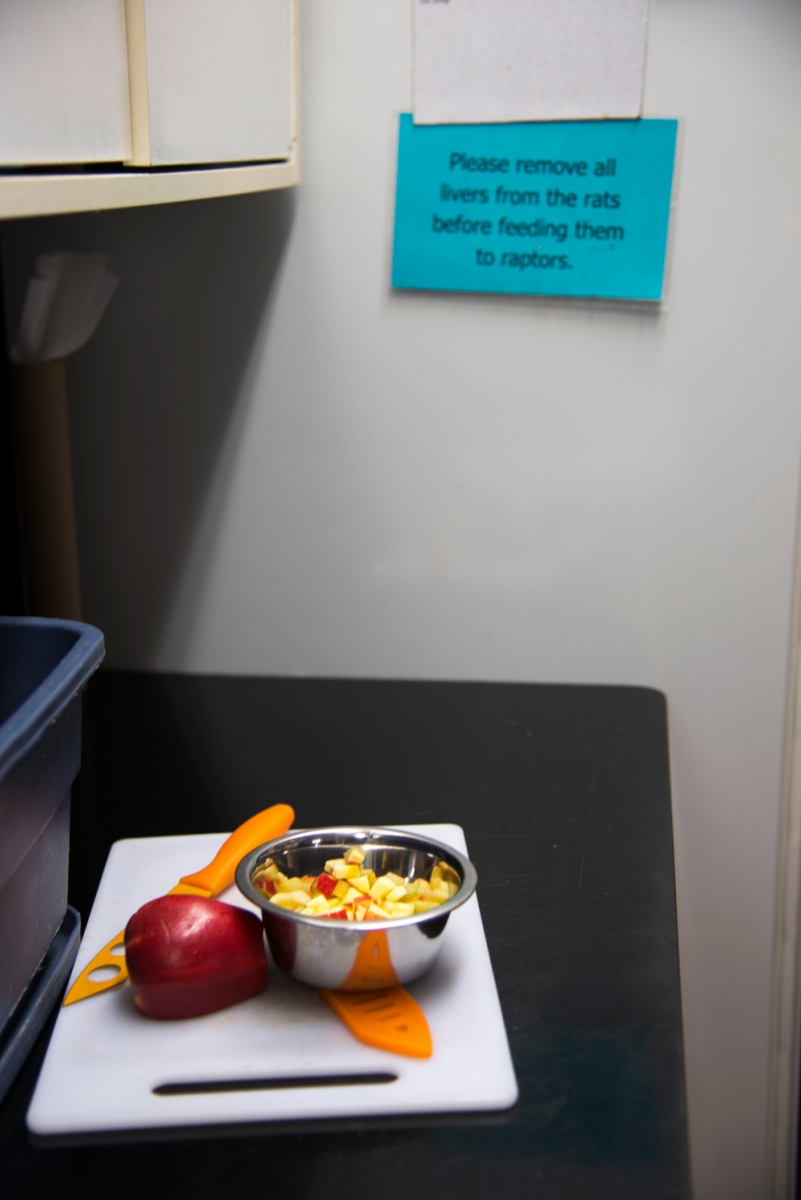 Staff and volunteers prep meals for their patients in the hospital kitchen. Wild animals have complex dietary needs. Veterinary staff carefully choose what each animal is fed, based on their age and medical conditions. CWRS sometimes receives patients who have been fed all sorts of strange concoctions by human caretakers, which unfortunately can interfere with the animal’s health and development. As with humans, animals deprived of specific nutrients at key phases of development can suffer permanent damage to their bones, immune systems, and other organs, so it’s critical to have veterinary advice. 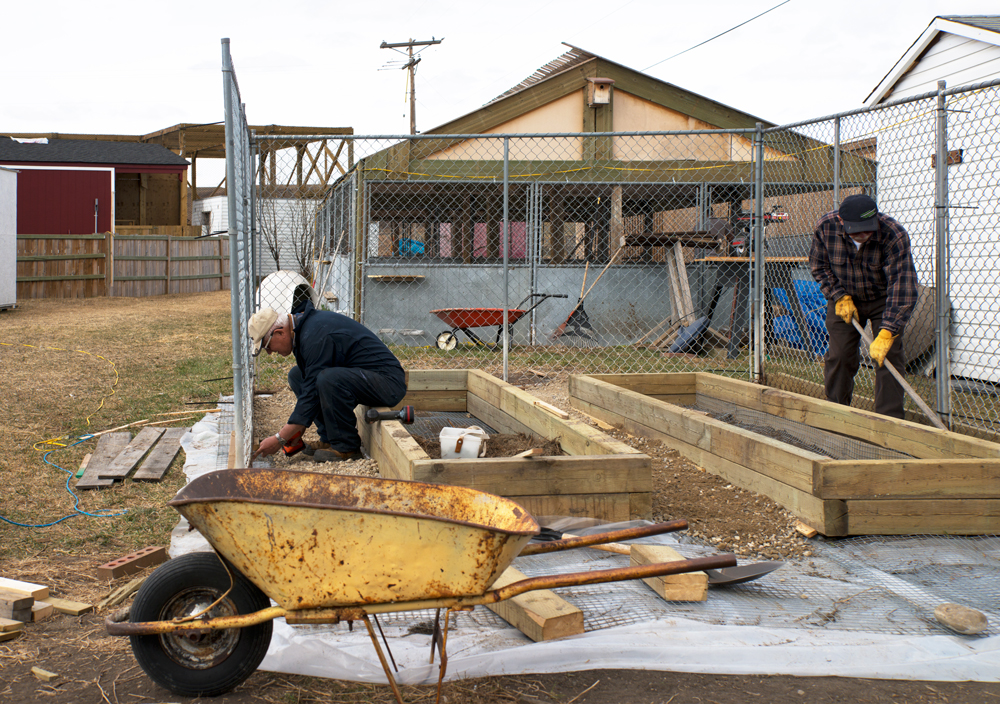 Volunteers Jim Rainkie and Wayne Hermanson work on the construction of raised garden beds on the CWRS property. Many of the animal patients will benefit from the fresh greens and vegetables that will be grown here. 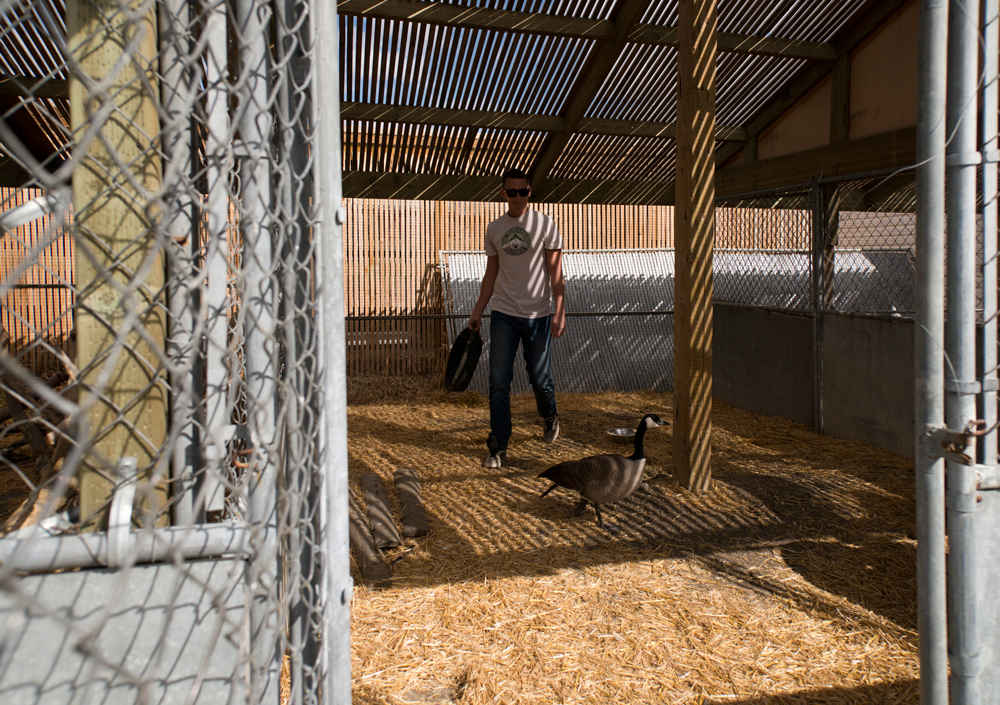 Volunteer Cory Rowan brings fresh water to resident Canada Geese Angel and Squintie. These permanent residents foster rescued goslings every year, which helps CWRS staff keep human contact with the babies to a minimum. These birds get a good healthy diet, too – no breadcrumbs allowed. “Bread mold (aspergillus) is the main cause of respiratory illnesses in birds”, says McFarland. “On top of which, bread is calorie-rich and nutrient-deficient.” Birds who fill up on bread often wind up with weak bones and not enough energy to migrate, so if you want to feed wild birds, choose healthy greens and seeds (probably good advice for human animals too). 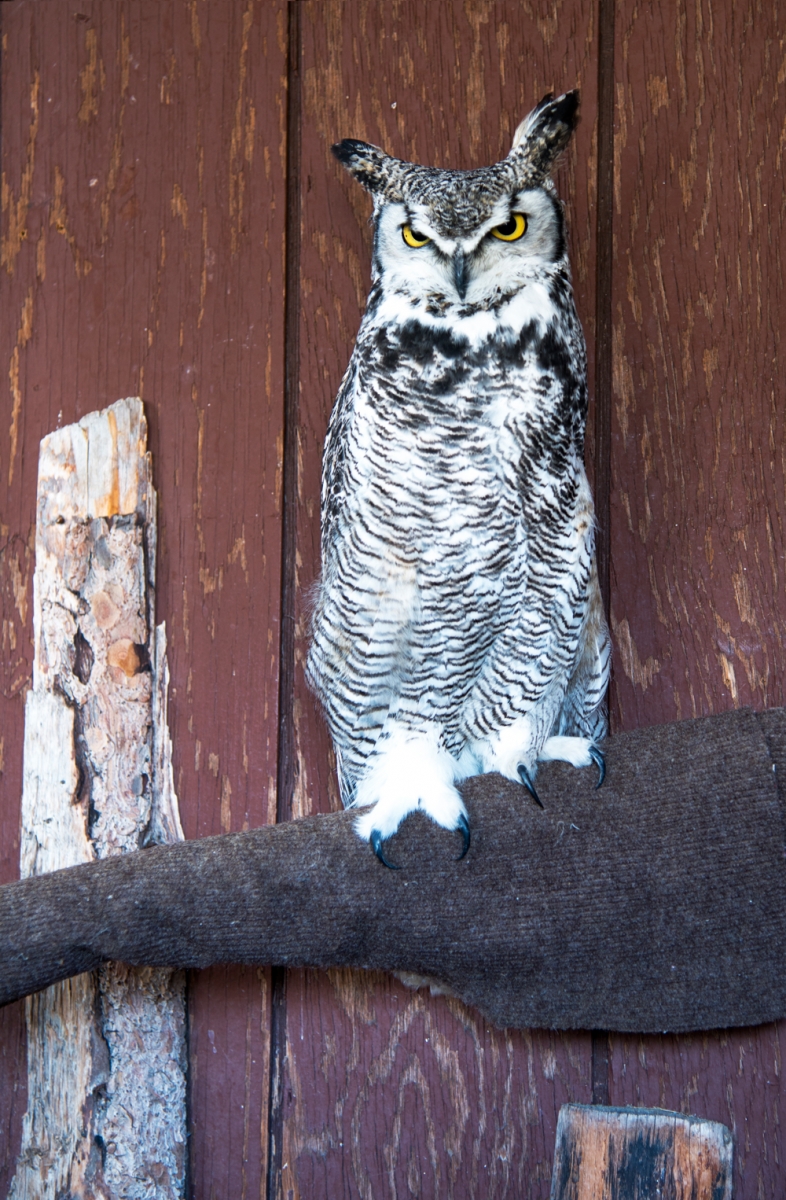 Great Horned Owl Oberon lost a wing in an accident in 2003 and has been a permanent resident of the centre and an educational ambassador ever since, visiting several schools a week. His work earned him a Volunteer Calgary award in 2006. His best friend is Ophelia, another Great Horned Owl living at the CWRS. 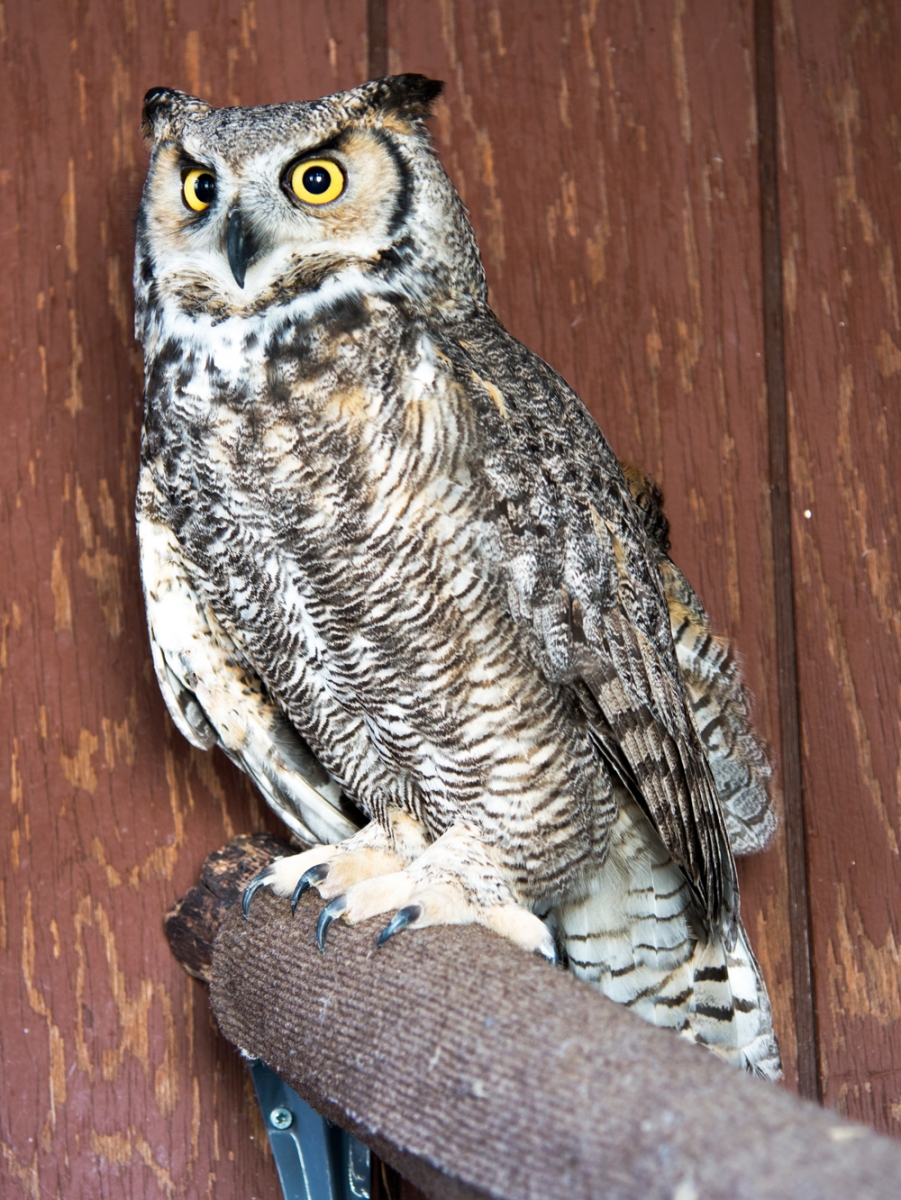 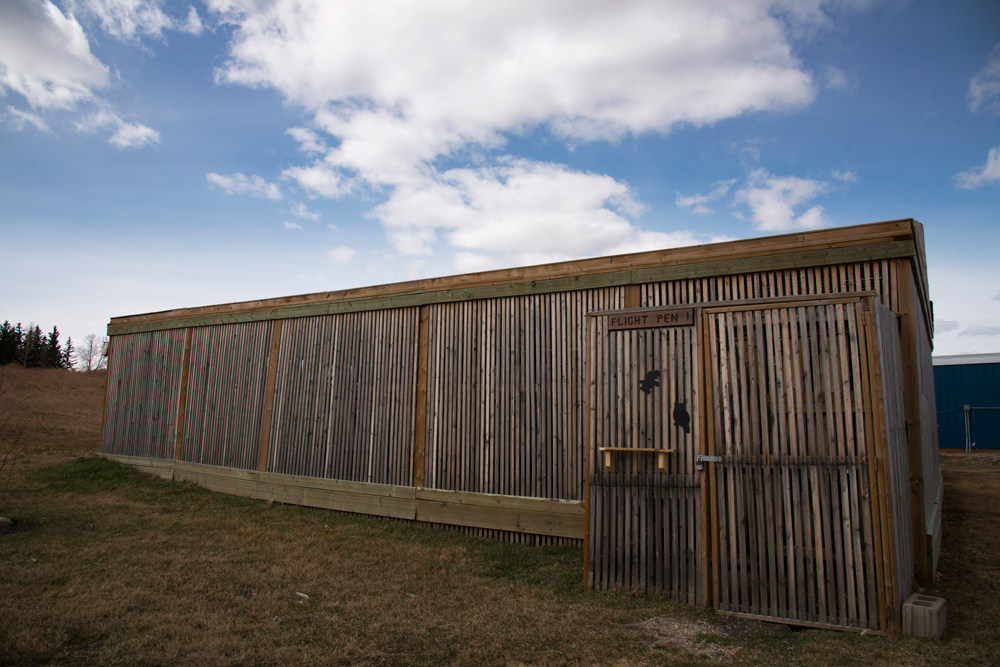 Large flight pen at CWRS, designed and built by volunteers.

The Calgary Wildlife Rehabilitation Centre’s Jenna McFarland will be leading a Jane’s Walk on May 7 where you can learn all about local wildlife and the work that CWRS does.

To learn more about volunteering and other ways to help or get involved with the CWRS, visit them online at calgarywildlife.org.