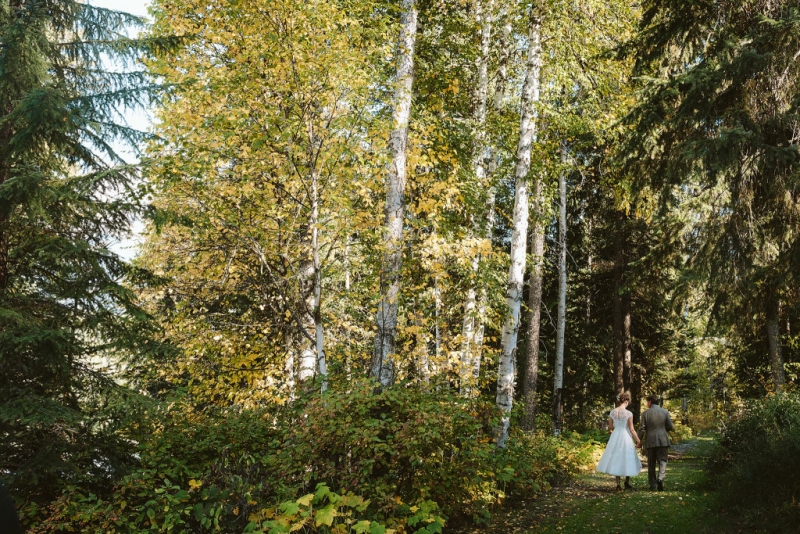 Jamie Konchack and Graham Percy have both been married a few times before. The Calgary-based professional actors have said pretend “I do’s” in various stage productions in Calgary and around the country multiple times over the course of their careers. So, when it came to their own real life wedding, they wanted their nuptials to be as authentic and genuine as possible.

The couple started planning by finding a location. Percy is originally from New Brunswick and Konchak grew up in Invermere, B.C. and they went back and forth on whether to go east or west. “We wanted it to be over a weekend, so people could actually visit and get to know each other,” says Konchak. “We also wanted it to be rustic and casual with the option to stay overnight with cabins and camping.”

The search led them to the Hillside Lodge and Chalets in Golden, B.C. and about an hour from Konchak’s childhood home. “I love the Columbia River Valley and the mountains and Hillside was just beautiful,” she says.

The celebration started on Friday, September 11. Konchak’s parents held a welcome barbecue and guests gathered to help decorate the barn at Hillside where the reception would be held the following day. On September 12, the couple said “I do” in a outdoor afternoon ceremony with blue skies and the mountains as a backdrop. Afterwards, guests sipped wine and played croquet on the lawn. The children made masks at a craft table for them to wear in a parade, led by a bagpipe player and inviting everyone to gather for dinner, speeches and dancing. 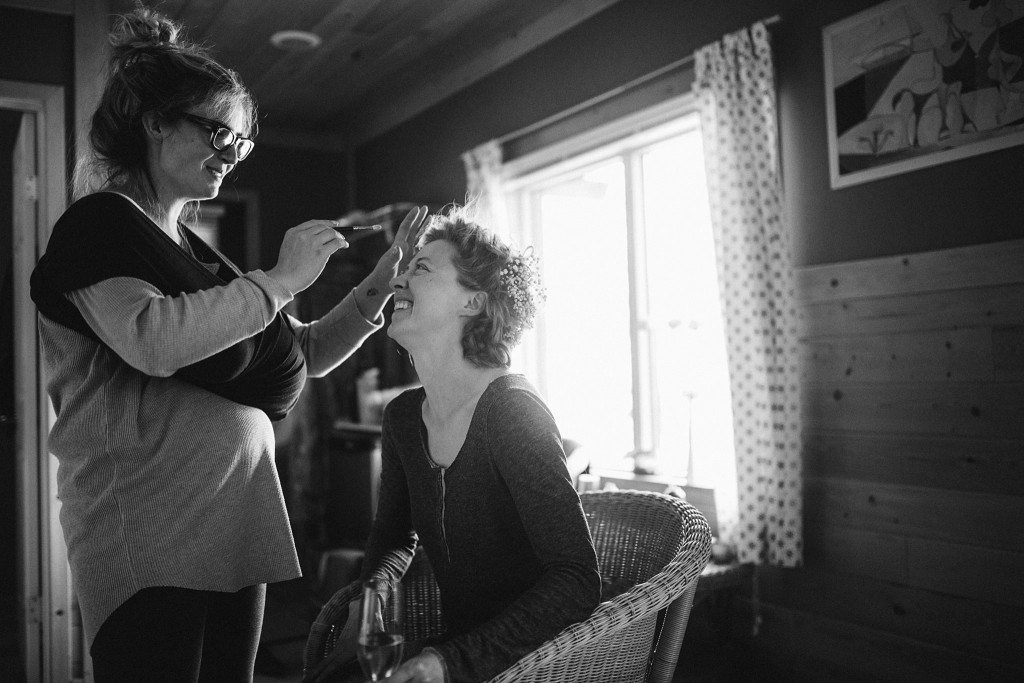 Konchak got ready in one of the cabins at Hillside. Her friend, Brit Pronyshyn, did her makeup. Pronyshyn had her newborn baby, Emmylou, in tow. 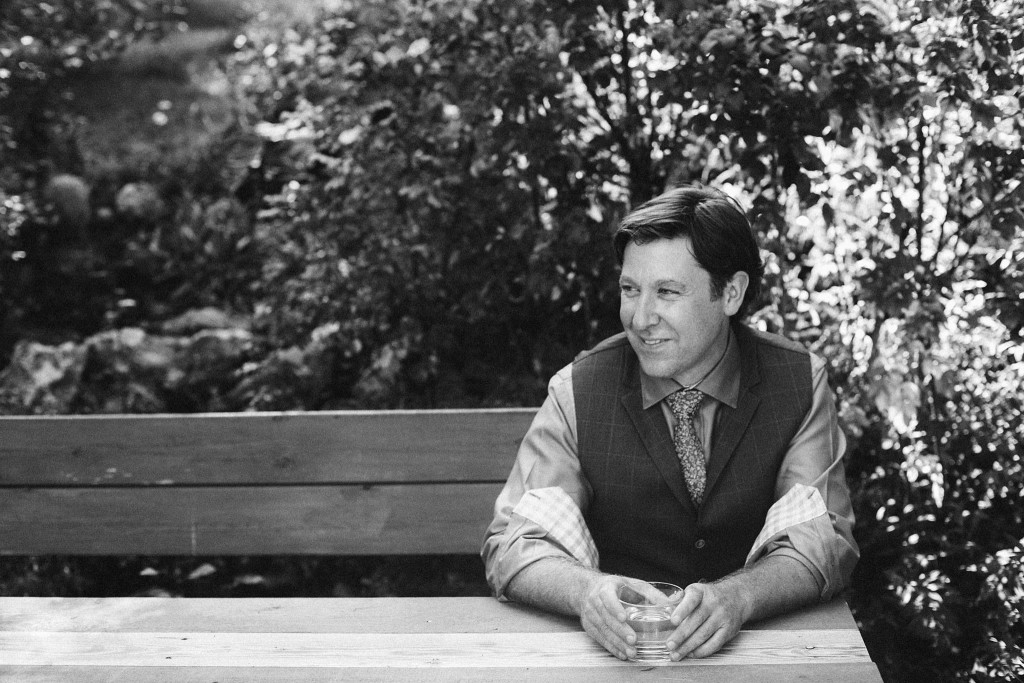 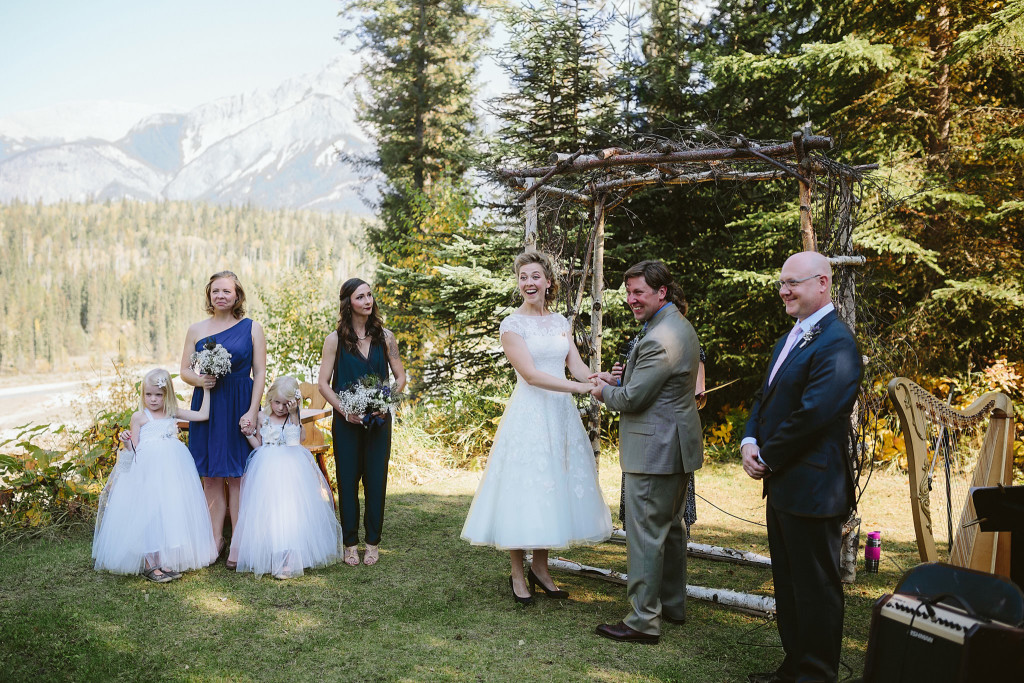 The wedding party was a mix of family and friends and included Konchak’s nieces, flower girls Anna and Brooke, as well as the couple’s dog Pepper, who walked down the aisle with Percy. 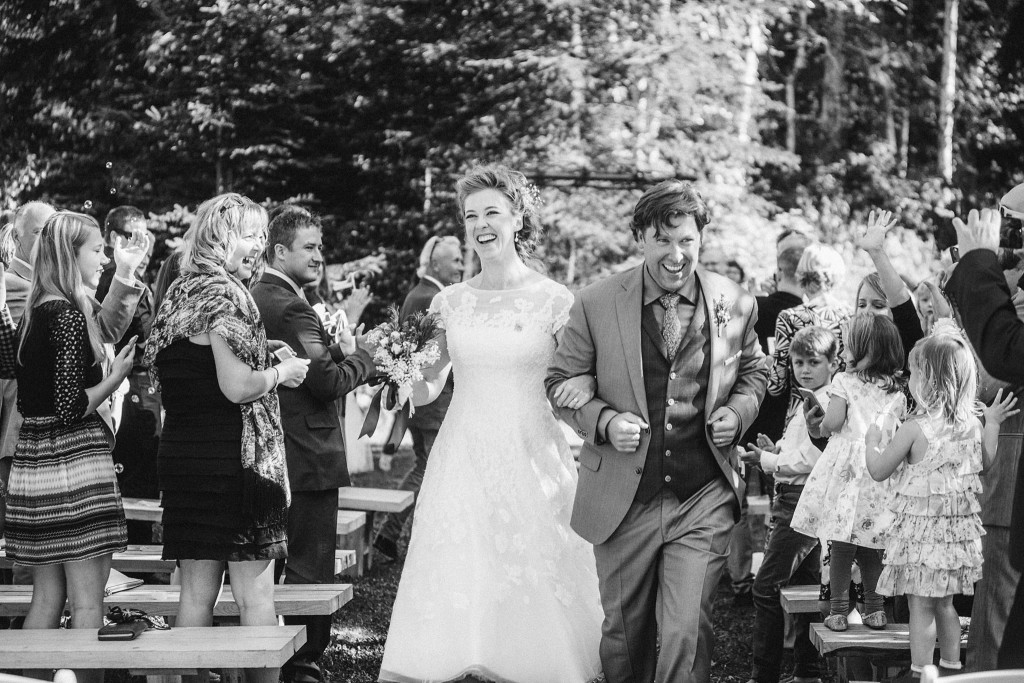 Konchak found her dress at David’s Bridal with the help of maid of honour and professional costume designer Deitra Kalyn. Konchak loved its lace detailing, tea-length hem and the fact she could wear it off the rack. 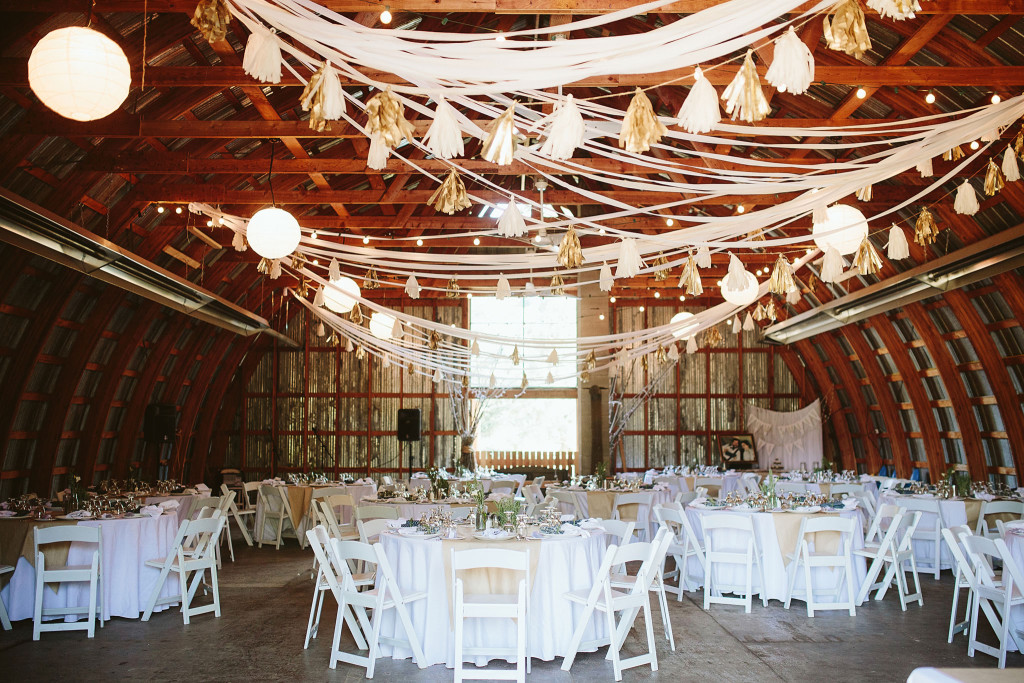 The reception was held in a barn at Hillside. The night before the ceremony, friends and family helped decorate the space for the party. Konchak said the beautifully decorated space felt like partying amidst the love of their guests. 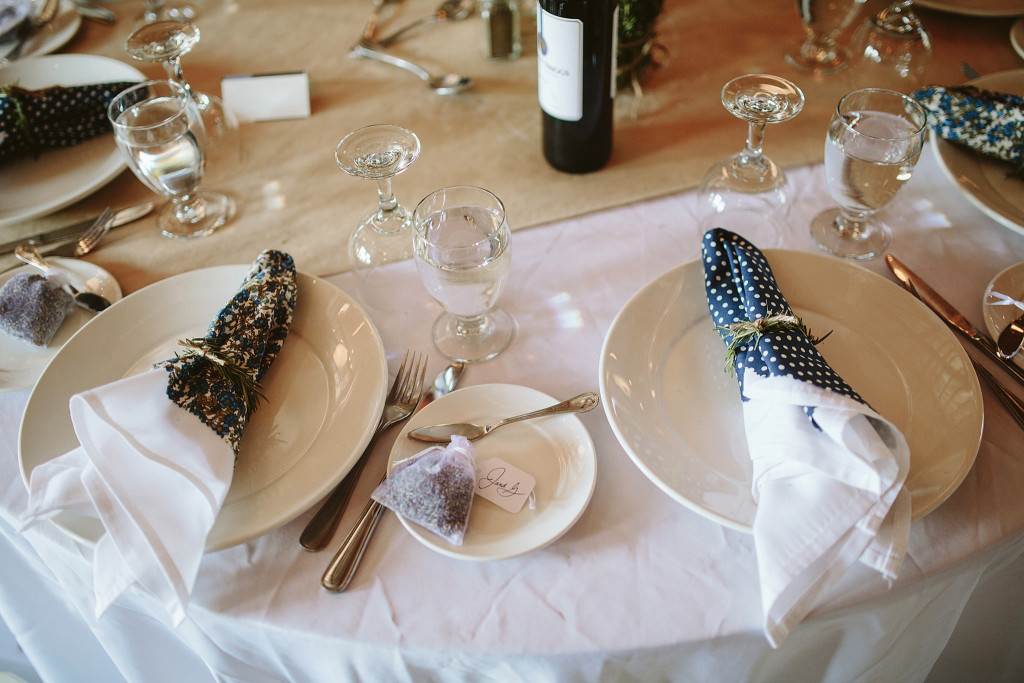 The lavender-filled satchels at every place setting were made by Konchak’s mom. The tables had simple bouquets of lavender and rosemary, which were a wedding gift from a friend of the couple. 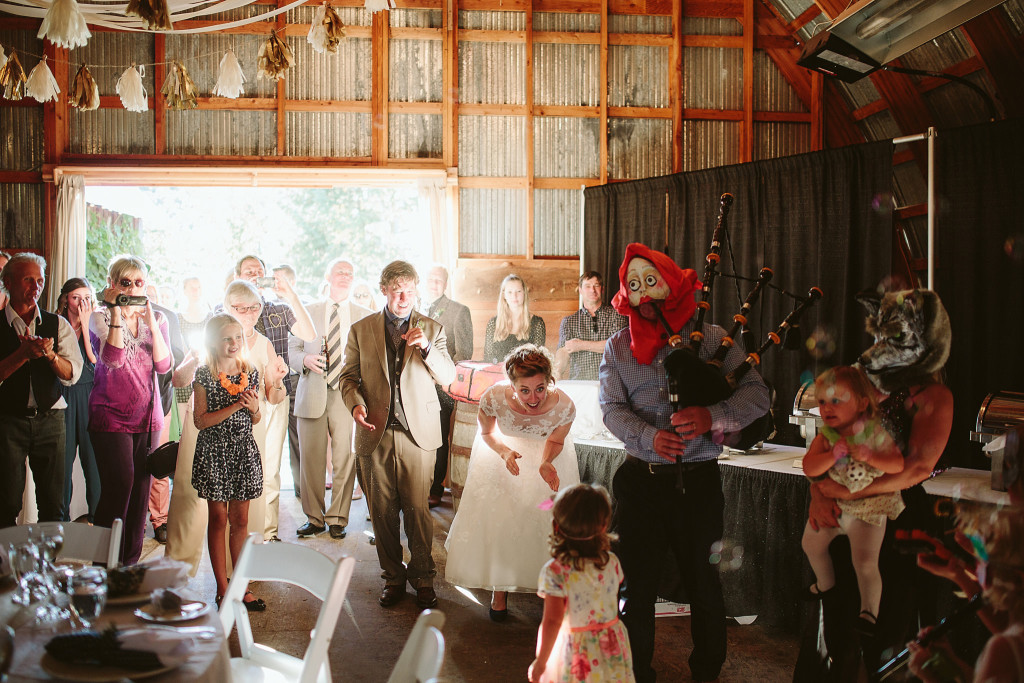 Children made animal masks at a craft table during the time between the ceremony and reception. They wore them in an animal parade, led by a bag-piping guest, to invite guests to dinner. It turned into an impromptu bag pipe dance party. 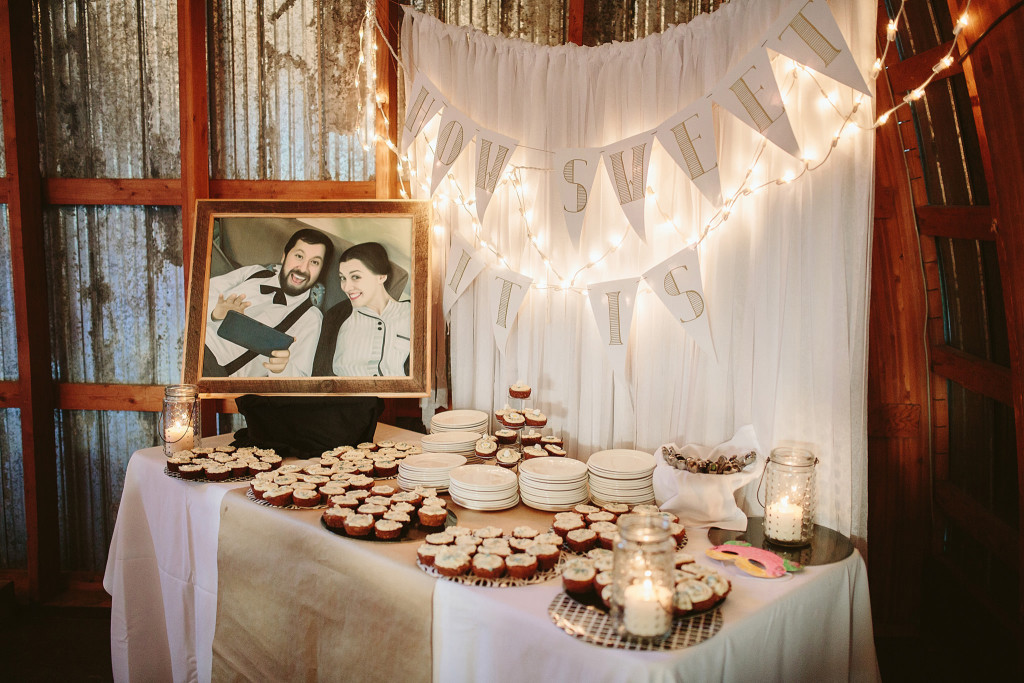 All of the desserts were made by family and friends, including cupcakes made by Konchak’s step-mom. 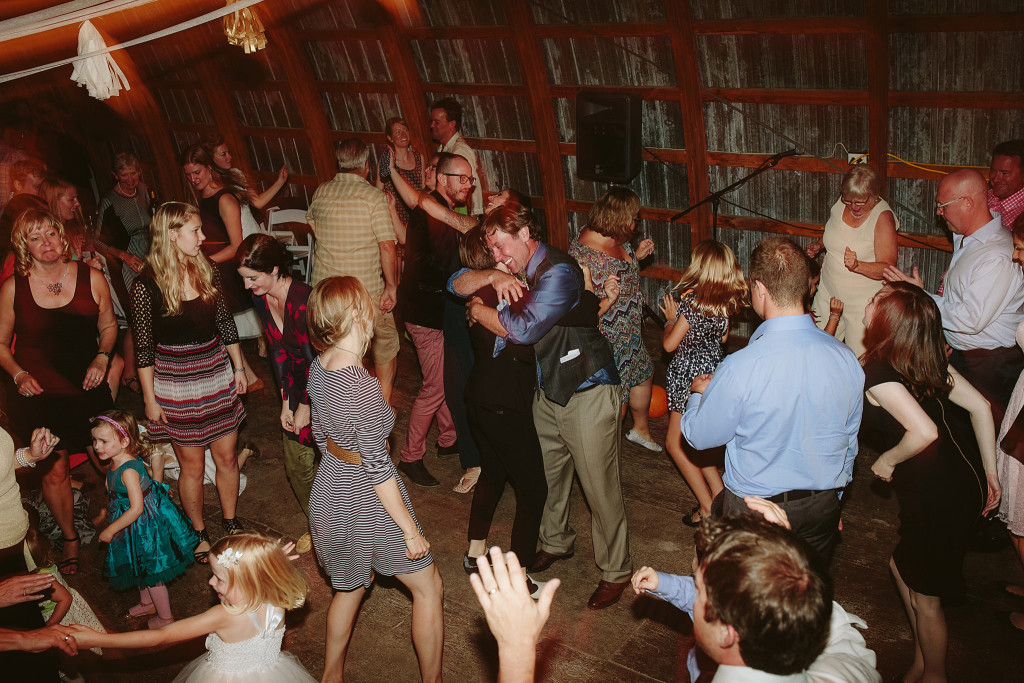 Every element of Konchak and Percy’s big day was made possible with the help of friends and family, including the post-dinner dance party. Friends brought the sound system and built the playlist.