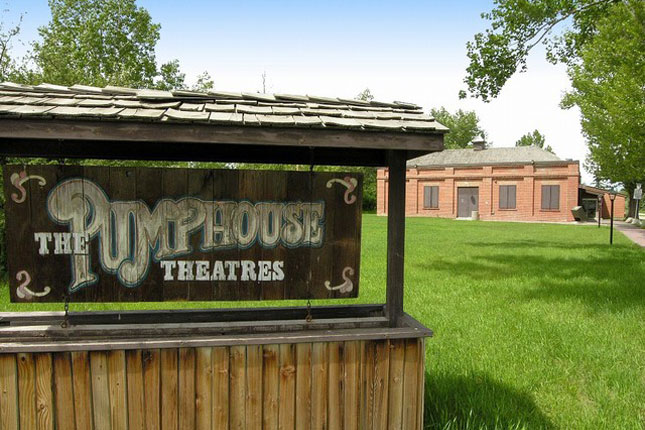 We love live theatre, so we decided to do a round-up of our favourite venues in which to watch it.

Home to One Yellow Rabbit, one of Calgary’s most innovative and provocative theatre companies, the Big Secret is on the second level of the Epcor Centre. It can seat up to 245 people and boasts a cocktail bar inside the theatre. It’s often used for cabaret-style events, such as last year’s ATP’s The God That Comes, with tables scattered around the bar and in front of the back riser seating. (Epcor Centre)

One of Downstage‘s venues, Birds and Stones is a long, low-ceilinged space in the basement of the Unitarian Church of Calgary on 16th Avenue N.W. Seating 50, it’s ideal for intimate shows and its lower rental cost means it hosts emerging artists, including the Major Matt Mason Theatre Collective. (207 16 Ave. N.W.)

With seating for 185, the Engineered Air is in the lower level of the Epcor Centre and faces 9th Avenue S.E. The eclectic interior boasts original pieces from the old Empress theatre, including wrought iron railings, mixed with ’80s-inspired graphic fabric panelling. The glass-walled and slate-tiled lobby is lovely for mingling. (Epcor Centre)

Lunchbox Theatre moved into its new home at the base of the Calgary Tower in 2008. Designed by Bathory Associates Architecture + Design of Calgary and Proscenium Architecture + Interiors Inc. of Vancouver, the TransCanada stage has moveable seating that can be adjusted for each performance. It seats 150. (160, 115 9 Ave. S.E.)

Home to Alberta Theatre Projects since 1985, the 400-seat Martha Cohen features tiered seating that forms a three-quarter circle around the stage. This guarantees that almost every seat is a great seat. In fact, the furthest seat from the stage is only 39-feet away. (Epcor Centre)

Downstage’s second venue is the Epcor Centre’s most intimate. With seating for 60, the space is considered a “black-box” which means it can be transformed into a variety of seating and performance configurations. For example, Third Street Theatre’s 2013 production I Am My Own Wife placed audiences facing east towards a built set. (Epcor Centre)

Home to BD&P Mystery Theatre and Y Stage, the centre offers the elegant and plush 350-seat Playhouse and the smaller, adaptable Studio space where seating can be moved for each performance. The shared lobby and bar is at the bottom of a wide staircase, so actors can make a grand entrance following performances and the audience can mingle and enjoy a few cocktails. (161, 115 9 Ave. S.E.)