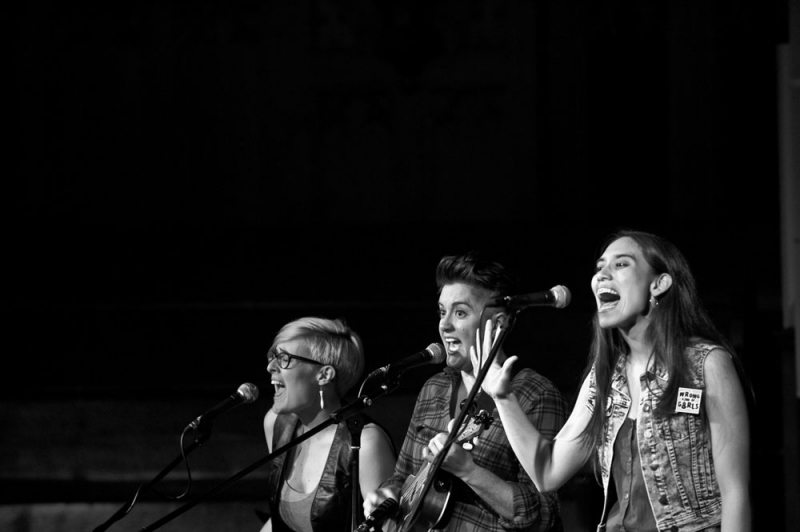 Between opening for mainstream comedians, playing cabarets and their own self-produced shows, The Wrong Kind of Girls, Calgary’s foremost queer feminist ukulele-playing comedy trio, have found a devoted audience in Calgary.

The blunt comedic style of Easy Annie, Shirley Payne and Pam of Green Gaybles has grown their local following and reached new audiences in the past year, opening for the likes of Rae Spoon and Cathy Jones, as well as playing a pre-show lobby gig for Margaret Cho’s last Calgary appearance.

Part of their appeal is the literal, straightforward manner they communicate in their songs, like “Real True Love,” about the realistic but gross side of a partnership, and “U-Haulin’ is a-Callin’,” which examines lesbian dating stereotypes. They balance comedic moments with more message-heavy work that speaks to issues like street harassment or the process of coming out again and again after the first time.

The Girls say they regularly hear from audience members who are grateful to understand other perspectives, or feel validated in knowing others have had similar experiences.”We sometimes have this narrative of Calgary being this really close-minded place,” Annie says. “But I think we’ve found this audience who thinks the same way that we do, and who wants to hear things that don’t compromise on feminism, that don’t compromise on queer visibility, that are funny, without being at somebody’s expense.”

That’s something that has kept the trio going after what was originally a one-off performance. It’s also an outlet that has helped them work through difficult experiences. “It’s another tool I have to say ‘What am I going to create or what can we talk about or what can we put out there in response to this?'” Pam says. “And you just feel less alone.”