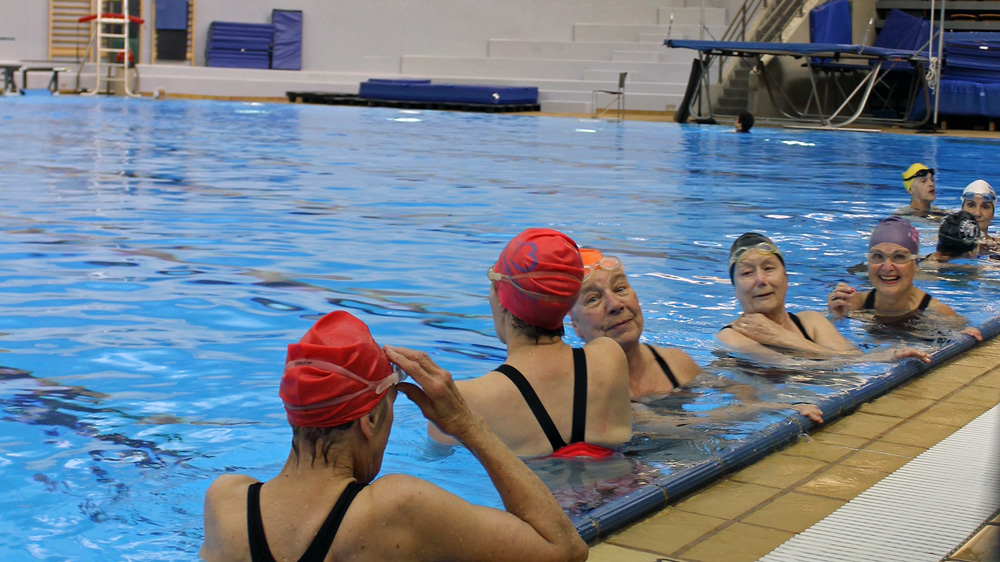 The Calgary Aquamums Masters Synchronized Swimming Club trains out of the Talisman Centre and they’re one of the best Masters synchronized swimming teams in the world.

There’s a group of older Calgary ladies that get together every Thursday morning to chat and catch up, but they’re not going it over a cup of tea or a game of bridge. They’re doing it during synchronized swimming practice.

The Calgary Aquamums Masters Synchronized Swimming Club is a group of close to 40 women who train out of the dive tank at the Talisman Centre. The club started in the early 1970s at the YWCA and moved to the Talisman Centre in 1983. Like any synchronized swimming team, the swimmers wear nose plugs and swim caps. They keep in time to the music by counting out loud. And, they hear the music they’re swimming to through underwater speakers. But unlike most synchro teams, members range in age from mid-20s to early 80s. The oldest Aquamum, Ona Bilman, is 81.

While there are no complete beginners, there is a range of abilities and previous experience. Doris Goranson, now 80, only started the sport when she was 42 years old. One of the club’s newer members, Angela Kokott, has been swimming with the club for a year and a half.  Others have a background in the sport and competed with the Calgary Aquabelles. One swimmer is even an Olympic medalist. Kelly Kryczka-Irwin won silver with Sharon Hambrook at the 1984 Summer Olympic Games in Los Angeles.

The exercise helps the women physically – one started because of a back injury, another swims to manage her Parkinson’s symptoms. It also helps them mentally. They learn three routines at a time, requiring the women memorize the moves and formations to three different songs.

Regardless of their ability or the number of medals, every member loves the sport because of the friendships they’ve formed and the camaraderie. “We do it for the physical exercise, but we’re also a group of women that has gone through lots together,” says Dot Padget, 65. “There’s a real sense of community here.”

The Aquamums train out of the Talisman Centre on Tuesday and Thursday mornings, and Monday and Thursday evenings. For more information on the Calgary Aquamums Masters Synchro team, visit aquamums.ca or contact the club’s president Stella Faubert.

Before training gets started, the ladies chat, catch up and swim a few laps of the Talisman Centre’s dive tank to warm up. 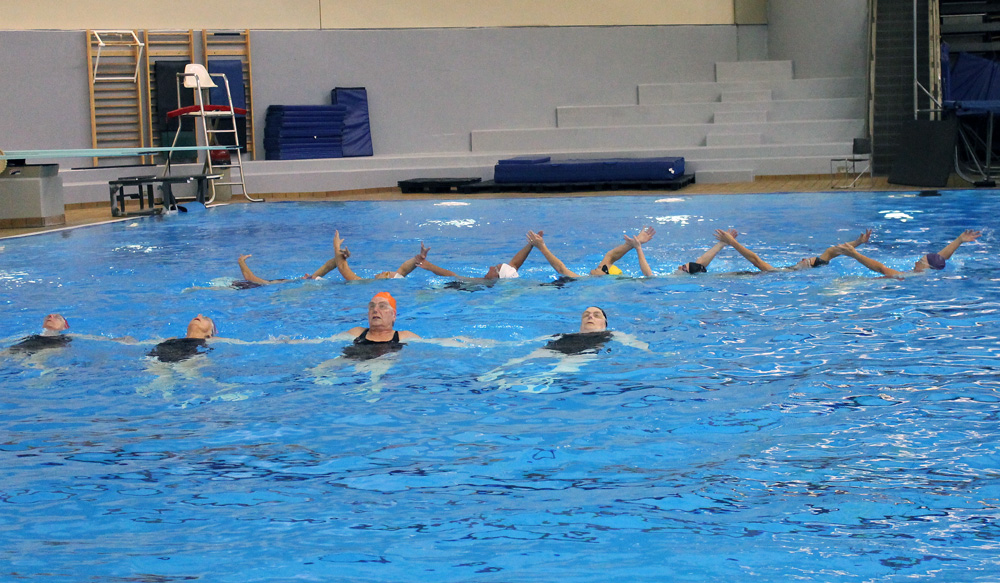 On Thursday mornings, there are two groups swimming together. One group has more experience than the other and works on more advanced movements and formations. 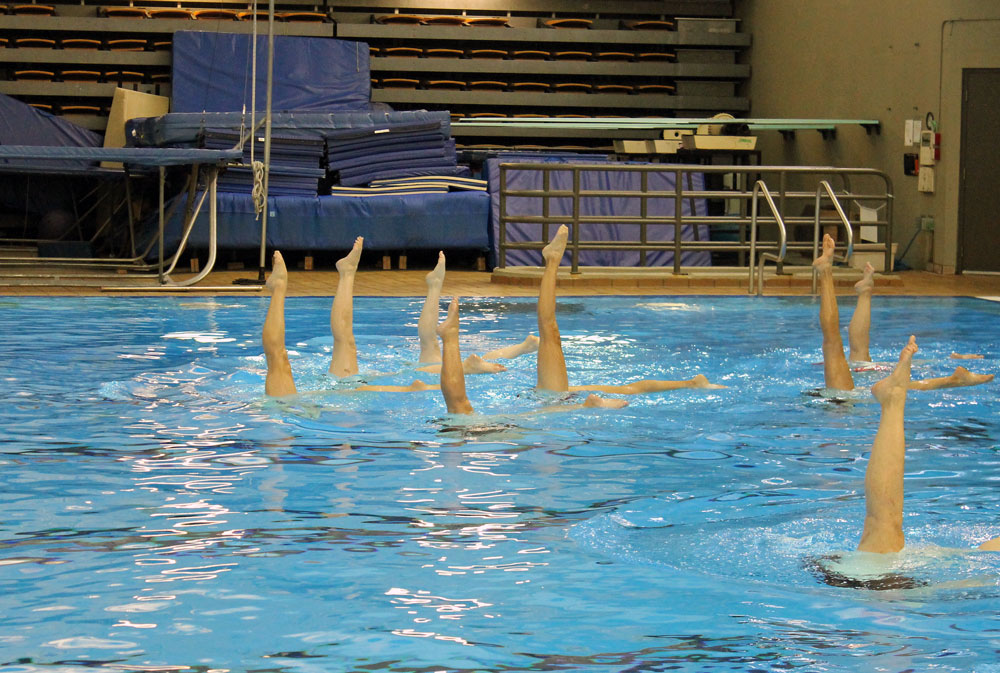 There’s a speaker in the pool so that the ladies can hear the music while they’re underwater. 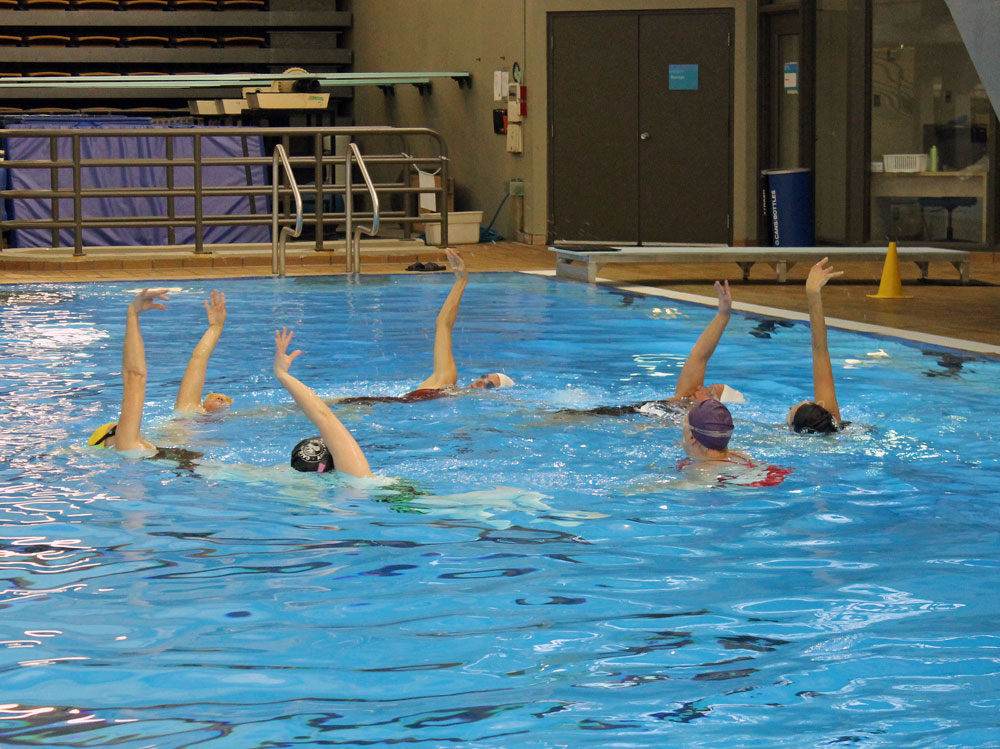 According to coach Kim Strachan, the Aquamums work on three routines at one time: a technical routine, a long routine and a combo routine. 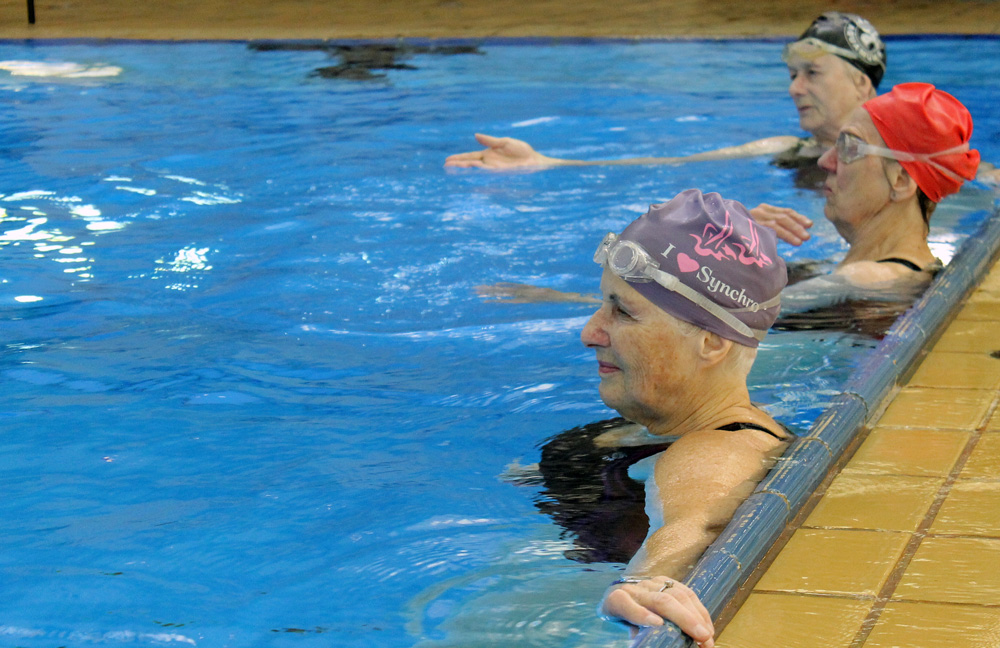 (Front to back) Judy Boswell, Ona Bilman and Doris Goranson take a short break at the wall.