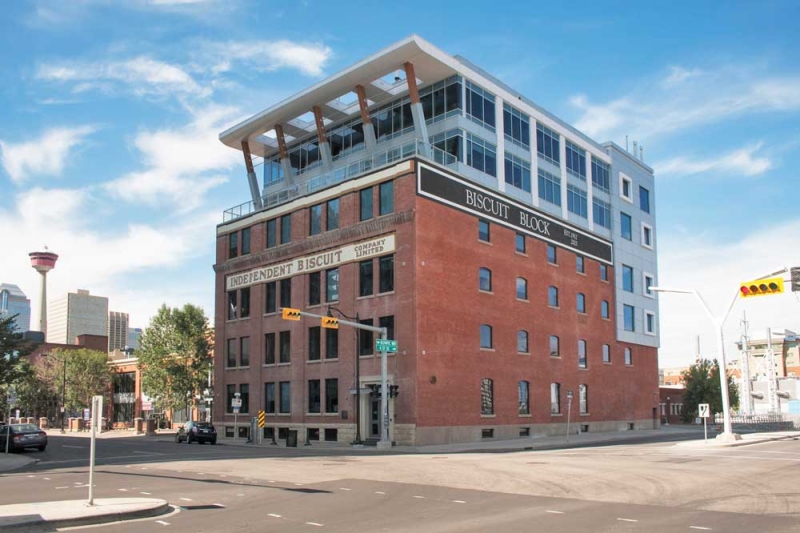 Large white letters on a black background announce the building’s name and at the same time invite speculation: “Biscuit Block.” The six-storey structure’s peculiar moniker, taken from its past function as a cookie factory, compliments its unique look. The lower portion is four storeys of the red brick typical of Calgary’s historic warehouses and the building sports characteristic paired rectangular windows on the front facade and arched windows on the sides. Above, the architectural style leaps ahead a century – brick gives way to glass and steel in cool white and grey tones and five diagonal wood and steel beams support a white overhang that provides cover to a terrace. At the back of the building the modern and historic sections interlock in a neat dovetail that serves to unify the Biscuit Block’s two parts into a cohesive whole.

“The philosophy on that was that we didn’t want to compete with the old building,” says Biscuit Block architect and designer Frank Kaspar of Abugov Kaspar Architecture. “We wanted to highlight the old building and contrast it with today’s architectural expression.”

Standing at the corner of 11th Avenue and 4th Street S.E., the original building was erected in 1912 to serve as a warehouse for the Neilson Furniture Company. At the time, many Calgary businesses warehoused goods on the south edge of the city’s commercial core while conducting retail operations along Stephen Avenue.

A 1926 addition to the building made room for one of the growing city’s first biscuit producers, the Independent Biscuit Company, to base its manufacturing activities. The company operated its wholesale trade out of the building as late as 1974. But over the following decades, the historic warehouse fell into disrepair, until the derelict structure caught the eye of Kaspar and his firm.

“We thought the building there was very good as far as showing the industrial history of Calgary and that it should be saved,” says Kaspar. “But in order to do that and get some money back, we had to add more to the building, more square footage, so it would justify the redevelopment.”

Completed in 2013, the renovated Biscuit Block now stands out as one of Calgary’s most distinct office buildings. Developments like it, in which private-sector firms choose to restore and renovate a historic building, often incorporating modern additions, have become more common in recent years. LocalMotive Crossing and the Snowdon Block in Ramsay, and cSpace King Edward in South Calgary all combine turn-of-the-20th century buildings with modern extensions of varing forms.

The trend is especially notable given Calgary’s not-entirely undeserved reputation for disregarding the value of historic buildings. Over the past decades many of the city’s historic buildings have been demolished in favour of new construction. Although architectural protection started to some degree in the 1990s, the economic booms in the 1970s and 1990s in particular brought with them an emphasis on the new, and liberal use of the wrecking ball. The result is an architectural landscape with comparatively few buildings that are more than a few decades old.

For these reasons, Kaspar applauds the new efforts to reimagine historic buildings. “A lot of these buildings have been sitting here for a long time until somebody looked at them and found a new use for them,” says Kaspar. “It’s too easy to knock ’em down and build a new higher density building. I think the character of the city should go a little bit further back than today.”

Clint Robertson, City of Calgary senior heritage planner, says part of the destruction is due to the City’s inability to legally protect heritage buildings easily. Alberta lacks the legislation available to most other North American jurisdictions that allows municipalities to protect buildings without the consent of the building owners. The City asked the province to grant it those powers during the 2017 renegotiation of its city charter, but the province rejected the request. With the municipal government lacking the ability to intervene on demolitions, decisions about what to do with old buildings have often fallen to developers.

But heritage designation can be a double-edged sword. Had the owners of what is now the Biscuit Block opted to demolish it at any point during its period of dereliction, there is little the City could have done. On the other hand, the building’s rebirth through extensive renovations and its modern addition may not have been possible were it subject to the strict rules that come with official protection.

Kaspar believes it’s important to strike a balance between protecting a city’s history while still allowing for renewal. “Where do you draw the line? At a certain point if a building is modified it doesn’t comply with any of the protection guidelines,” he says.

In the absence of legal powers to protect buildings without the owners’ consent, Robertson and the City’s heritage planning department have found other ways to help preserve Calgary’s historic buildings. City Hall has a variety of programs that encourage developers and building owners to preserve buildings. “In the absence of the ability to regulate heritage buildings you need incentives,” says Robertson.

One such incentive lets owners of designated historic resources in the city centre give up their right to re-develop on that site, and instead sell their development rights. This means that if the site of the building is zoned for a higher building height and density than the current historic building makes use of, the owner can transfer the rights for that extra height and density to a developer for use on another building. The arrangement allows building owners to get a financial benefit out of the potential of their property without needing to demolish a heritage building to realize it. According to Robertson, around 10 sites have made use of the program over the years.

The City’s powers over zoning can also provide leverage in negotiations over proposed developments. The Arriva condo building in Victoria Park was able to attain its status as the tallest residential building in Alberta when it was completed in 2007 (now surpassed by The Guardian condo towers on the same block) thanks in part to the developer’s commitment to restore and preserve the Victoria Park School, which occupies the same site. “That site was zoned for much lower densities and heights, but the school buildings were not protected,” says Robertson. “So we basically said to them, if you’re willing to protect these buildings, we’ll offer you a different type of land use.”

The paskapoo sandstone Victoria Park School, completed in 1912, was one of the many schools built to accommodate Calgary’s rapidly growing population during the city’s pre-World War I boom. The Edwardian architecture is typical of the historic sandstone schools dotted among Calgary’s older neighbourhoods. The Victoria Park School’s presence in a modern downtown lends it extra significance. Dwarfed by the massive condo towers that surround it, the school now creates an intense architectural contrast between Calgary’s past and present.

On occasion, the City opts for a more straightforward tactic to help protect or restore a landmark – it hands over cash. Dating from 1911, the C.C. Snowdon Oils Factory and Office on 11th Street S.E. represents one of Western Canada’s first oil manufacturing and refining businesses. In 2013 the City gave the property owners, Heritage Property Corporation, a $260,000 grant to renovate and restore the site, which had suffered significant damage from a 1988 fire. In exchange, the City was able to stipulate certain standards and guidelines for the renovation and the owners agreed to let the property be designated a municipal historic resource. Restored in a style similar to the Biscuit Block, the commercial building also boasts a new glass-and-steel addition on top of the original brick structure.

Robertson is pleased with how the school preservation and Snowdon Block projects turned out and says the City is in the process of creating further incentives to encourage protection of historic buildings. He also hopes other levels of government will step up and create incentives of their own and points to a program in the United States that provides generous tax credits to companies that renovate historic buildings.

In fact, a bill to introduce a similar program in Canada was first tabled by Peter Van Loan, Conservative Member of Parliament for the riding of York-Simcoe, in December 2016. The committee looking at the bill delivered its report to the House of Commons this past December and recommended creating the tax-credit program, but, ultimately, the bill failed to pass.

“It would have been a game-changer. This has been the single most effective tool in retaining heritage sites in the USA,” says Robertson. “These are the types of incentives that really make the rubber hit the road for heritage conservation.”

Though Kaspar and his client did not make use of any of the City’s programs to redevelop the Biscuit Block, he acknowledges that City Hall’s effort to promote preservation has played a role in the renewal many historic buildings are experiencing. More than the government’s efforts though, he believes Calgary and its attitude toward heritage buildings have changed and that is what is making the difference. “I think we have matured as a business community to the point where not everything needs to be knocked down,” says Kaspar.

He points to a general reawakening of interest in the past in everything from the return of retro music and clothing styles to the popularity of DNA tests to discover one’s ancestry. Societal interest has also translated to buildings, Kaspar says, with businesses valuing historic and unconventional office space more than ever before.

That demand is another crucial factor behind the proliferation of developments like the Biscuit Block. The building’s tenants span a wide range of businesses, from law offices and financial advisors, to landscape architects and technology firms. Founded in 2013, app developer and mobile software company AppColony moved into its current Biscuit Block offices in 2015. Senior vice-president, operations, Darrell Moir says the firm was attracted by the building’s distinct qualities.

“We love the feel of the character space. It’s a really cool spot,” says Moir. “Even though we’re in the basement of the building, we’ve got 13-foot ceilings and natural light coming in.” The seeming incongruity of an app developer – the epitome of a 21st century business – operating out of a century-old former biscuit factory isn’t lost on Moir. “You have both ends of it, modern technology, together with the 100-year-old building,” he says. “It’s kind of a neat mix.”

Moir does admit that there are some difficulties that come with working in a space that has been around since before the First World War – regulating the temperature can be especially tricky. But despite the climatic drawbacks, Moir says AppColony loves the space.

Kaspar says the site of the Biscuit Block building is just as important to its historic value. He seems genuinely pleased that the former factory in Calgary’s industrial beltline is once again filled with activity and people at work. “There’s a sense of recycling in architecture. Buildings are built for a purpose and then somewhere down the line the purpose changes, because we as people change the way we live and do business,” says Kaspar. “Buildings should go through the same kind of change, where we find new ways of using the same buildings.”

While Kaspar says he appreciates the Biscuit Block’s historic aspects, he is equally excited that the building now has a bright, and above all, certain future. He likens it to a restored vintage car with a brand new engine. “People love old Camaros, but they don’t drive that old engine,” he says. “They put a lot of effort and energy into restoring these vehicles as close as they can, but not exact. That’s kind of what we’re doing here.”