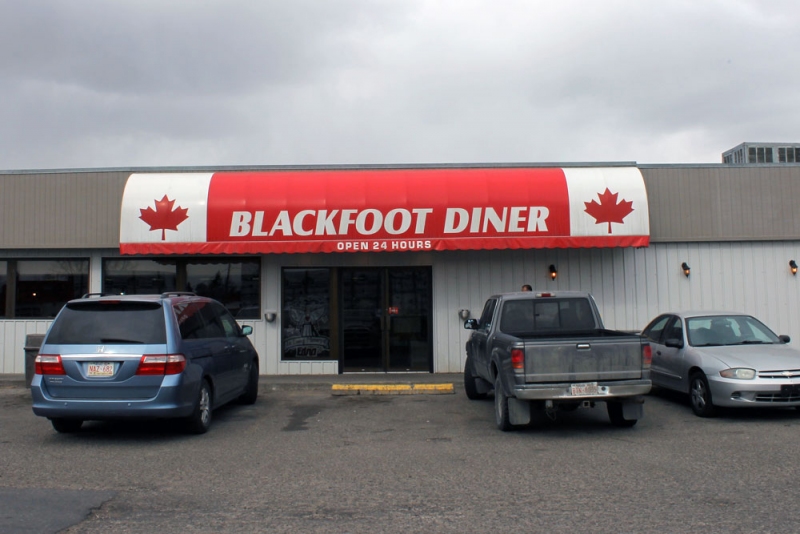 Outside the diner. PHOTOGRAPHS BY KARIN OLAFSON

Edna Taylor moved to Calgary in 1948 when she was only 15 years old. She came from a farming town close to Wimbourne and had followed in her big sister’s footsteps. They lived in an apartment together and they both took the bus to their jobs downtown – the two worked in a caf called The Wave Cafe. And Edna worked hard. Regular customers knew her as eager and energetic and spunky. Just six years after moving to Calgary, this young woman opened her own a cafe that was well ahead of its time.

In June 1956, this young, entrepreneurial woman opened the Blackfoot Truckstop Diner (then known as Royalite). It was the first truckstop in the city limits. It was one of the few cafes outside of the downtown core. And a few years after opening, it was the city’s first 24-hour diner.

While the Blackfoot Truckstop Diner has become a well-known Calgary institution, it hasn’t survived six decades just because of its shepherd’s pie and turkey dinners. Ask any regular customer or long-lasting staff member, and they would say that the diner’s ongoing success is due to Edna’s legacy.

Edna Taylor passed away in 2011. She wasn’t just Edna Taylor. She was the Queen of Pay-It-Forward. A woman with a passion for people (and thrift stores). One helluva lady.

Her legacy lives on in the Blackfoot Truckstop Diner. Roxanne Taylor, Edna’s daughter, and Tanyia Brown, the current manager, say that because of Edna, it will always be a people place. Every customer is treated the same, whether they’re a lawyer, a truck driver, a winning rodeo athlete or homeless. People help people out. The staff feel like family. And regular customers are part of that family. Taylor says it’s like Cheers, except not a bar.

“Now, the old generation is bringing their kids and their grandkids here,” says Taylor. “It’s pretty special to see.”

In honour of its 60th anniversary, we spoke with Taylor and Brown to learn a little more about the diner’s 60 years in business.

The story of the Royalite

“When Edna was working at the Wave Cafe downtown, she was approached by regular customers who worked for an oil company called Royalite Oil about having her own little cafe,” says Taylor. “The original diner had a lot of chrome, it had booths and stools, and a few tables. It only sat about 30, until the Bull and Bean room was added in the early 1970s.”

The Blackfoot Truckstop Diner moved to its current location in 1983.

The story of the grocery shopping and the couponing

Taylor says that, in the early days, Edna picked up all the groceries for the diner herself. “But in those days, they didn’t have a car,” says Taylor. “She went and bought groceries and brought them back to the diner on the bus. Even in the winter!”

And when it came to shopping, Edna was certainly savvy. “Edna was the Queen of Shopping – you couldn’t outsmart her,” says Taylor. “She knew where the sales were. If a flyer with coupons didn’t show up, she’d go out and get it. If there was a sale limit of only four or five items per customer, she’d rally the staff and they’d all go shopping together.”

The story with the storage room and the French fries

Taylor says that she first started coming to the diner when she was about three years old. “I remember some of the old staff saying to me, your mom would come into work and I’d be in charge of looking after you until you left,” says Taylor. (Brown adds that it wasn’t unusual to set up the storage room with blankets and pillows so that staff’s children could nap while their parents were at work.)

The story of the one thing that changed

Since the Blackfoot Truckstop Diner moved from its original location to its present location, not a lot has changed. “I think the only thing that has changed in all those years was the uniform,” says Taylor.

And there have been some memorable ones. In the early days, it was a white dress uniform, much like a nurse’s uniform. Taylor says that for many years, that’s all Edna ever wore – she even wore it on vacation to Venice Beach in the 1980s. Brown can’t recall ever seeing Taylor without her white smock on.

“We had some pretty funky uniforms over the years,” says Brown. “There were the brown uniforms with the pleat in the pants. Or the ones with the slouched socks. Or the one-piece jump suit.”

Right now, the servers all wear a pink uniform that matches the venue’s walls.

The story of the men’s washroom

At least one corner of the diner has gone through a renovation. But that wasn’t because the owners were trying to jazz up the venue. Back in 2006, Brown was working in the diner when a regular customer in his 80s put his car in reverse instead of drive. “And he went right into the men’s bathroom,” says Brown. “There was only one man in there, washing his hands. And then also [the regular customer], just sitting in his car in the bathroom.”

“We did have to get a new bathroom for the men after that,” laughs Taylor. “That had to get remodeled, but that would be the newest part of the entire diner.”

The story with the boy and the veal cutlets

Taylor’s favourite dishes at the diner were the hot turkey and the veal cutlet. “The truth is,” says Taylor, “back in high school I had a boyfriend who loved those veal cutlets. I’m pretty sure that’s why he went out with me – it was a guarantee to come for veal cutlets once a week.”

In 2003, the movie Undercover Christmas was filmed in the diner. Edna never liked the diner to be closed – ever. Taylor says that they finally talked Edna into allowing the film crew into the diner on one condition: that the kitchen could stay open so they could do takeout orders from the back door. The truckers still got their food and the diner was only closed about six hours.

The next time you watch the movie, watch closely. They used some staff as extras – one server, Lois, is still working at the diner – and they used the diner’s food in the scenes too.

The story with the Halloween costumes

One of Brown’s best memories of the Blackfoot Truckstop Diner is Halloween 2002. “Edna loved decorating for holidays, but we didn’t usually do costumes,” says Brown. “In 2002, Edna bought us all costumes for Halloween. They were graduation caps and gowns. It was like we were all her graduates and we had to wear them our entire shift.”

The story of the really busy Christmas dinner

Working at a diner that’s open 24/7 means having to show up, even on holidays. “The diner was always open on Christmas Day. So that’s where we always had Christmas dinner. Always.

“I remember one Christmas, probably 2007 or 2008, when we all came into the diner for dinner. One or two of the staff that was supposed to come for the afternoon shift never showed up. So, we all had to work! I remember it was really busy – we worked for our Christmas dinner that year. We all laughed about it afterward. It’s probably my favourite memory.”

Are Psychedelics the Future of Mental-Health Treatments?

Property of the Week: A Luxury Condo Located on Mahogany Lake