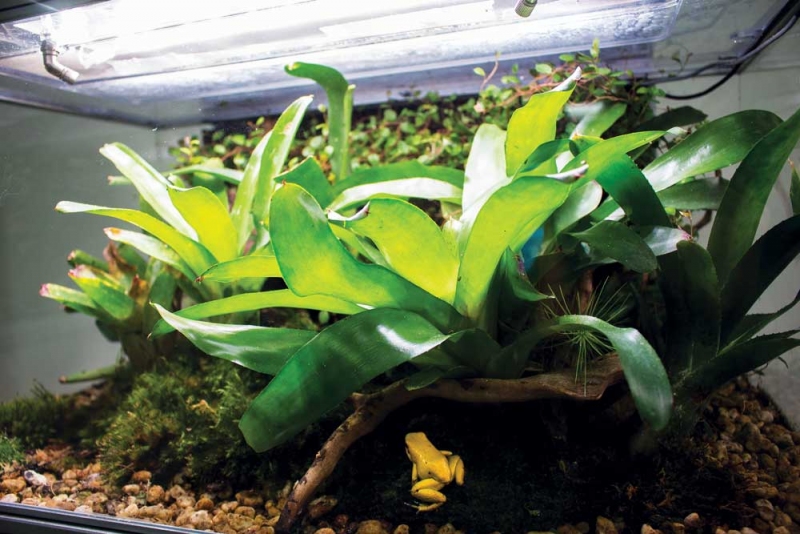 The offices of Biopod, a local company that produces specialized terraria, features a phyllobates terribilis or "golden poison" frog, one of the most toxic species of frog. Photograph by Jennifer Dorozio
A frog enthusiast and an entrepreneur walk into a children’s party…

What seems like the setup for a joke is, in fact, how Jared Wolfe, a biologist, and Tom Lam, a developer and businessman with experience working in Silicon Valley, met and hit upon the idea for Biopod, a business that produces and sells self-contained terrariums about the size of a medium-to-large fish tank.

Wolfe’s original inspiration for Biopod was to replicate habitats for endangered species of frogs. “Since many of these [frog] habitats are so tiny, once they get wiped out, that’s it,” says Wolfe. “I thought, ‘Wouldn’t it be cool if we could preserve that somehow?'”

Using a combination of LED lighting, an auto-irrigation system, integrated heating and other features that can all be controlled with a smartphone, the terraria can replicate more than 300 habitats – everything from desert to tropical rainforest. As such, Biopods are proving to be a unique conservation technology used by universities and zoos around the world for species preservation and controlled-environment research. The Calgary Zoo has landscaped two Biopods with the intention of housing and breeding northern leopard frogs, a species considered to be at risk in Alberta, while Chester Zoo in the U.K. has been using Biopods in a breeding program for endangered frogs for over a year.

Wolfe and Lam originally launched Biopod with a Kickstarter campaign 2015, during which they realized the demand for their terraria didn’t end with zoologists and conservation enthusiasts, and extended to the domestic pet and decor markets, as well. “We thought there might be a market for [Biopod] if we could raise $50,000 and sell 100 units,” says Lam. “We ended up raising $50,000 in about four hours.” The Kickstarter campaign eventually drew close to $730,000.

Biopods are conditionally available through retailers in Canada, the U.S.A., the U.K. and Australia right now, and are expected to show up in local pet stores in the coming months. The terraria are sold without plants (or animals) but there are plans to provide some topiary with the tanks in Canada and the U.S.

As cool as they might look on your shelf, Biopods are not your basic home decor piece. By nature, Biopods have a connection to conservation efforts, meaning everyone who has one can feel like they’re a part of something bigger.

“We think this has the potential to help save species, to really engage the public,” says Wolfe.

“We want to change the world and make a huge impact.”