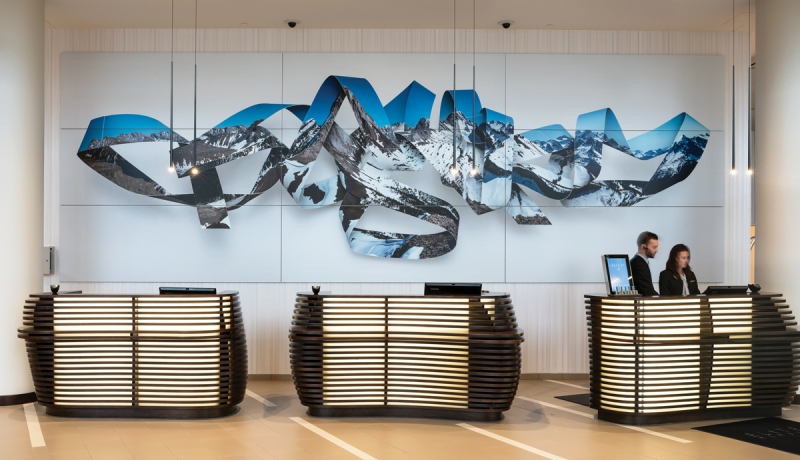 Note: Tatar Art Projects commissioned this work on behalf of the Marriott with the assistance of Jarvis Hall Gallery, which represents Tyler Los-Jones. The printing was done by Resolve Photographic Services, mounting by Pro-Lam and the aluminum cradle was created by Big Print Sign Company.

Los-Jones grew up in Calgary and graduated from the Alberta College of Art + Design in 2007. In 2014, curator Peta Rake invited Los-Jones to exhibit at Banff Centre for Arts and Creativity. There, he began reflecting upon how the tourism industry shapes images of the mountains, informing a new photographic series.

The history of the panorama was further food for thought. Irish-born painter Robert Barker patented the first immersive views of nature in-the-round in the late 18th century. Rotundas for viewing painted panoramas became a European fad in the 19th century, and the mid-19th century saw the advent of panoramic cameras.

Los-Jones created a ribbon landscape as an adhesive vinyl for the 2015 Alberta Biennial of Contemporary Art at the Art Gallery of Alberta in Edmonton and was among the 2016 recipients of a Lieutenant Governor of Alberta Emerging Artist Award.

For the creation of To keep the promise, Los-Jones took the panorama to its logical conclusion, as he says: “gathering more information than you ever thought possible.” He hiked from the Smith-Dorrien/Spray Trail in Kananaskis, scrambling up scree slopes to a high-altitude peak, then stitched together 12 digital panoramas to make a 30-foot, double-sided photographic strip. That strip was then twisted into a four-foot span that was mounted to his studio wall with cardboard and Scotch tape. He then photographed that piece from the one vantage point where none of the support structure showed to capture the image of this large-scale, permanent photographic tour-de-force.