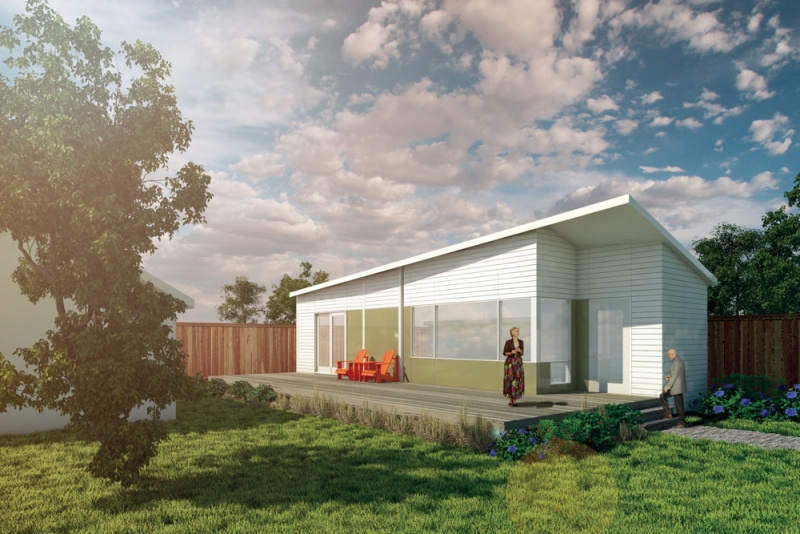 A rendering shows the prefabricated suite as it might look in a backyard. All photographs courtesy of Housebrand.

Approximately 85 per cent of Canadians age 55 and over would prefer to stay in their current residence for as long as possible. However, the typical family home isn’t necessarily the best environment for aging adults.

At some point, most of us are no longer able to navigate stairways and bathtubs with ease, and even rugs and other furnishings can become hazards. Adding grab bars, ramps and specialized washrooms can give people a bit more time in their homes, but often at the expense of devaluing their greatest financial asset – their house – just when they need to cash it in.

“Most of the housing we live in isn’t suitable for people once they start to need that kind of environmental modification,” says John Brown, who is heading up a program at the University of Calgary’s Faculty of Environmental Design to develop and test a prefabricated laneway house designed for frail, aging adults. “What you get is this Hail Mary pass when mom or dad has a stroke, and then there’s a commode in the dining room and someone’s blown out the side wall of the bathroom. You’re devaluing the property. Quality of life goes down, stress goes up and it’s only a stop-gap measure.”

Instead of that stop-gap, Brown and his team have envisioned a modular, pre-fabricated home for aging adults that can be adapted to integrate assistive elements like grab bars and medical technologies like oxygen and dialysis as needed, as well as home management, monitoring and sensors from local company Smart, working together to create a supportive environment.

This summer, Brown and his team will begin testing their laneway home design by having people live in the test suites for up to three months at a time. The test suites will be the third version of the project’s laneway home and the first to actually be installed in Calgary neighbourhoods.

Brown says the whole suite is basically a medical device that someone would live in – he compares it to a pair of glasses. “Eyeglasses are a medical device – they correct vision. But that’s not what we think when we buy them or why we wear them. I choose these because I think they look good on my face and because they express something about me,” he says.

Brown envisions a time when we approach housing for aging seniors the same way – with necessary medical elements built in, but with a design sensibility that aligns with how they want to express themselves.

Along with the idea that housing can be a medical device, the other big change in thinking put forth by this project is that the suite, which Brown refers to as a “supportive living unit,” could also be non-permanent and leased from the government or a non-profit instead of bought by individuals. “If you think of it instead as a device that you rent, like a wheelchair, you are no longer responsible for the upfront cost,” says Brown, who also notes that this brings with it important bylaw implications because the suites aren’t permanent. “The big shift is that it’s a medical device that you live in. It’s not a secondary suite.”

But he stresses that at this time, they are just testing. “I have to be careful what I say, because people get really excited,” he says. 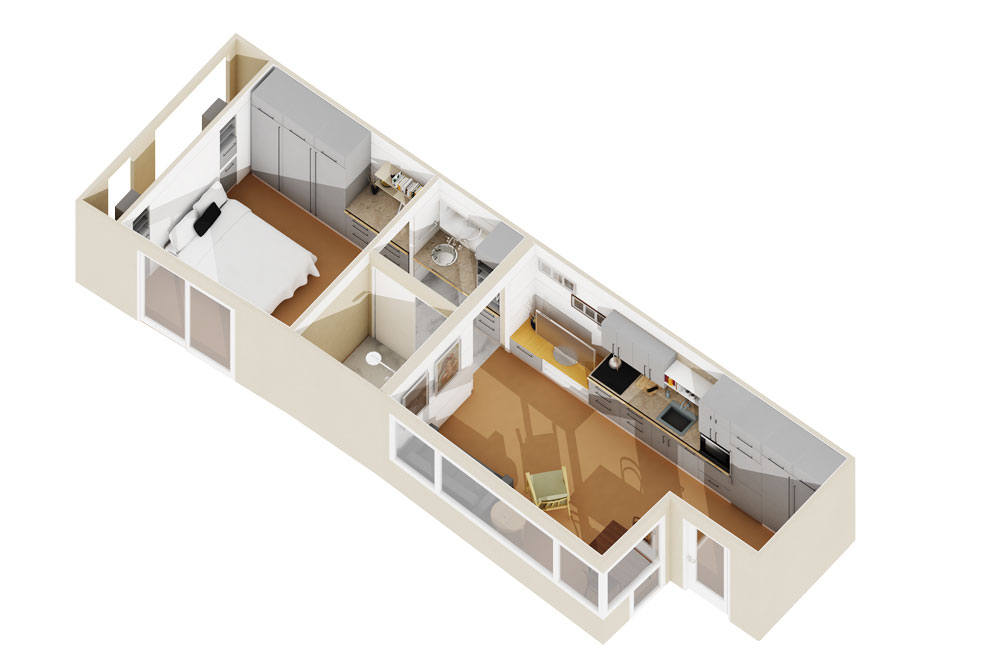 The layout of the home from above.

Towel racks double as grab bars and lighting in the toe kicks of the cabinets improve safety but can also blink to set the pace for a physio program. The wall behind the bed can be easily modified to incorporate medical technologies such as a dialysis machine or oxygen.