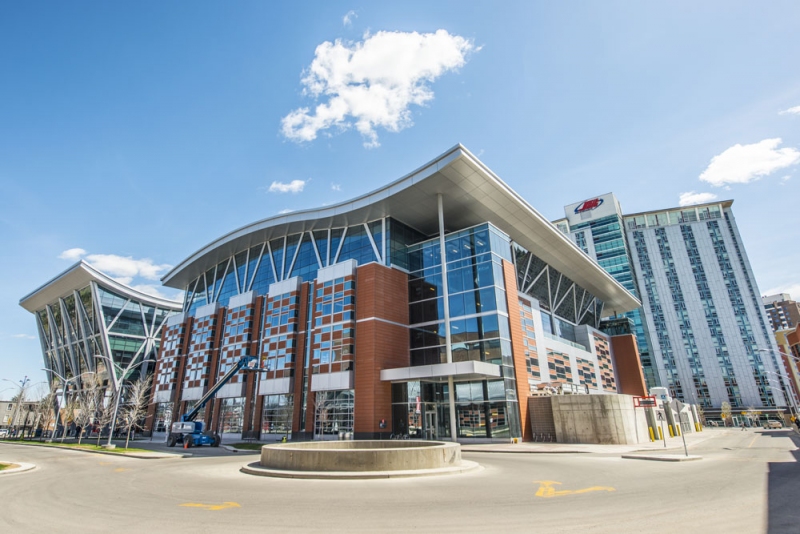 All photographs courtesy of Southern Alberta Institute of Technology

There’s going to be a big party this Sunday to celebrate. It starts at noon with a barbeque. The day’s festivities also includes an enormous cake, a concert by Dan Mangan, a chance to try your hand at different trades, and more. There will also be fireworks at 7:16. (That’s 19:16 on the 24-hour clock.) Everyone is invited to attend the celebration. Register online for the free event.

In honour of this anniversary, we spoke with Chris Gerritsen, SAIT’s communications and marketing specialist, Billie Rae Busby, the marketing and communications coordinator for the SAIT Trojans, and David Finch, a local historian and author of Shapers, Makers and Originals: The Story of SAIT’s First 100 Years to hear just a few stories from SAIT’s 100-year history.

[Note: while SAIT wasn’t known as SAIT until 1960, it will be referred to as such throughout this article for continuity and clarity.]

The story of the man who started it all

SAIT, called the Provincial Institute of Technology and Art (PITA) from 1916 until 1960, was started by James Miller. Miller had a PhD and was a hands-on learner: he worked on the railway and as a cabinetmaker, as well as having other jobs. In 1916, the world was in the midst of the First World War and the province was seeing veterans returning home from the front line. Miller saw a need for a new kind of educational institute – one with less lecturing and more hands-on learning that would focus on retraining veterans.

Miller was SAIT’s first principal. He opened the institution with the goal of providing relevant, adaptable and technical education. The equipment list that year included a motorcycle and an automobile, as well as two lathes, two drill presses and one forge. (That’s all pretty high-tech considering many Calgarians were still getting around on horseback.)

It impressed people across the border. Americans visited SAIT to see how veteran training worked here and were so taken with Miller’s skills that he was recruited to retrain veterans in the USA.

On October 16, 1916, SAIT welcomed its first students. There were 11 full-time students – six veterans of the First World War and five other young Calgarians looking to learn metalworking and motor mechanics. While these were all men, SAIT did have female students taking classes as soon as the institution opened. There were hundreds of part time students taking evening and weekend classes. Women were in the teacher-training program and taking art classes. And there were women in motor mechanics classes – back then, if you wanted to drive you had to know how a car worked.

The story of a unique piece of architecture 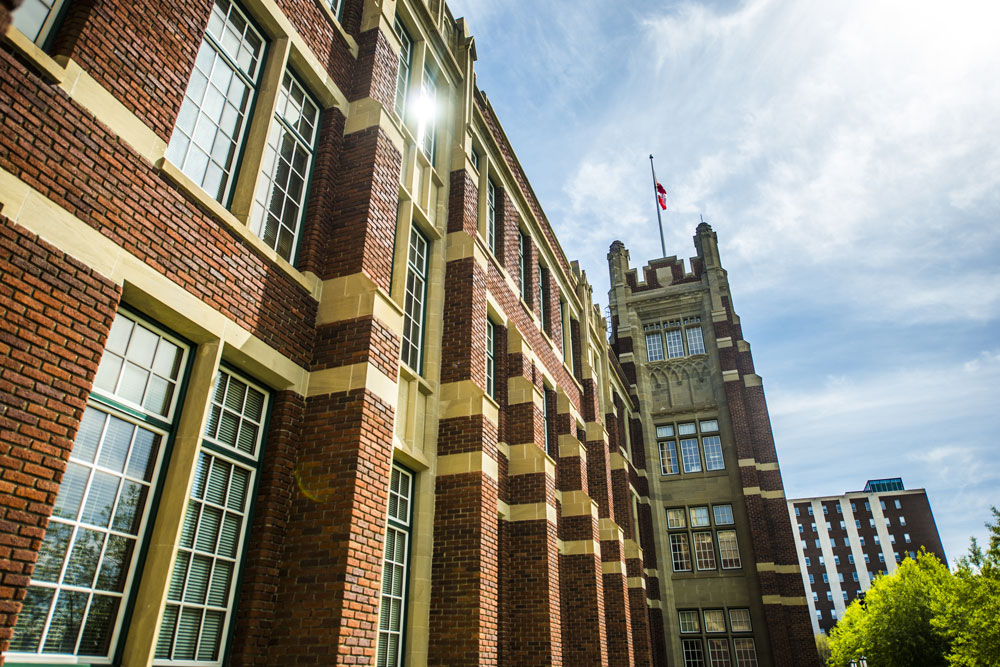 The story of the free evening courses

Alberta sees its fair share of booms and busts, but there was a really big bust in the 1930s. It was the Great Depression, and it hit Calgary hard. Unemployment was high and money was tight. To help the city get through this tough time, SAIT began offering free evening courses to the unemployed. SAIT instructors volunteered their time to improve the skills of Calgarians who were out of work. As well as this, the institution offered lunches to women and children in need during the Great Depression.

SAIT wasn’t always located at its North Hill campus. When the institution first opened in 1916, it operated out of the Colonel Walker School in Inglewood (as well as a few other buildings in the area) and moved to the North Hill location in 1922.

But that wasn’t its last move. Things were disrupted for the school during the Second World War. In 1940, SAIT was moved out its North Hill campus to make room for the Royal Canadian Air Force. The art department moved to the Coste House in Mount Royal, while the rest of the classes operated out of the Stampede Grounds.

Classes ran under the bleachers of the old Grandstand. It was squishy. It smelled like hot dogs and other fair foods. In the winter it was really cold. In the summer it was really hot. Students had to share washrooms with members of the public who were at the Stampede Grounds. But the location did the job – it had space for equipment, students and teachers so the hands-on learning could continue during the war. Classes ran here until the war ended in 1945.

The story of the Trojans and the Helenas 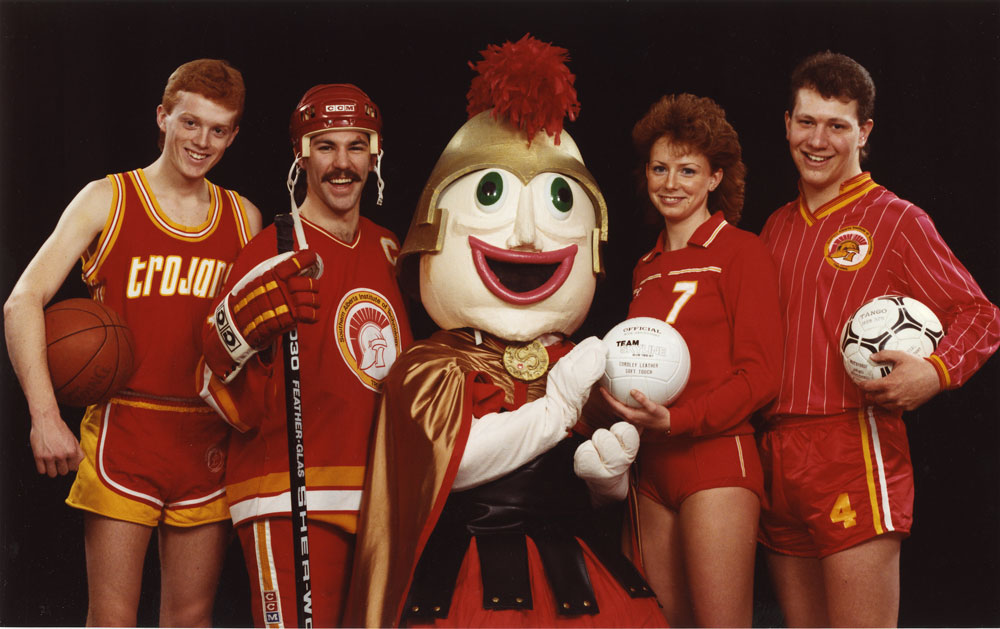 Sport has been a part of SAIT since the early years. Recreational sports kicked off in 1921 when students formed a basketball team, and SAIT students joined City of Calgary leagues for basketball and hockey in 1936. At this time, it was mainly men competing for SAIT. Women joined in more prominently in the 1950s – the first cheerleaders for the men’s basketball team took to the court in 1956 and women’s athletics began in 1958.

But the teams weren’t always known as the Trojans, as they are now. In the early days, the institution’s sports teams were known as the Tech Bombers – and the women as the Tech Bomberettes. The reason the teams are named the Trojans (and the women the Helenas until 1988 – it was customary for women’s teams to have a different name) is unclear. It could have something to do with all the Greek naming found throughout the institution, like the Orpheus Theatre and Spartacus Lounge (now The Gateway).

The story of Troy

SAIT’s varsity mascot Troy the Trojan Horse hasn’t been around forever. Before Troy, the school had a gorilla as a mascot and another strange, unidentifiable creature. Troy has had some makeovers since he was “born” in 1998, but he still exists today.

The story of the Kiss concert

Back in 1974, one year after the American rock band made up of Paul Stanley, Peter Criss, Ace Frehley and Gene Simmons formed and before the band became a big hit, Kiss performed a concert in SAIT’s gym. There were 164 people at this concert, which was pretty intimate considering how big this band would later become.

The band, known for its elaborate face paint, smoking guitars and levitating drum kits, didn’t become really popular until the late 1970s. But those 164 concert-goers saw them before the group became recognizable and well-known.

(Speaking of musicians, SAIT art student Joni Anderson performed at the school’s annual banquet in 1960. She sang and played the acoustic guitar. She was a student for just one year before she moved to Toronto to follow her musical dreams. That student was Joni Mitchell.)

The story of the Ugandan nuns

SAIT didn’t only cater to Calgarians. In 1976, two nuns from Uganda came to SAIT for two terms. They were there to learn basic auto mechanics – their convent in Uganda was gifted with two vehicles and they took the two-term course at SAIT to learn how to keep those vehicles functional and running.

The story of SAIT and the 1988 Winter Olympics

The 1988 Winter Olympics was an exciting time for the whole city, as well as for SAIT as an institution. Staff and students volunteered, and the institution’s first student housing complex, Owasina Hall, was used to house international athletes and games officials.

The CTV Gala Dinner was also held at SAIT in the Campus Centre’s Symposium Room. There were some big names there like Brian Mulroney, and of course, mascots Hidy and Howdy.

The story of the 101-year-old alumnus

Clarence Hollingworth has been in Calgary longer than SAIT has. At 101 years old, Hollingworth is currently the institution’s oldest alumnus. And he saw it grow and change from the very beginning. Hollingworth was six years old when he saw the cornerstone of Heritage Hall being laid. He studied at SAIT to become an electrician and graduated in 1934. After joining the navy during the Second World War then working as a journeyman electrician, Hollingworth returned to SAIT as an instructor in 1952. He taught there for 28 years. In May 2015, Hollingworth was awarded an honourary science degree from SAIT.

And even today, he’s still returning to SAIT – Hollingworth will be on campus for the anniversary event on Sunday in the alumni lounge at 2 p.m.