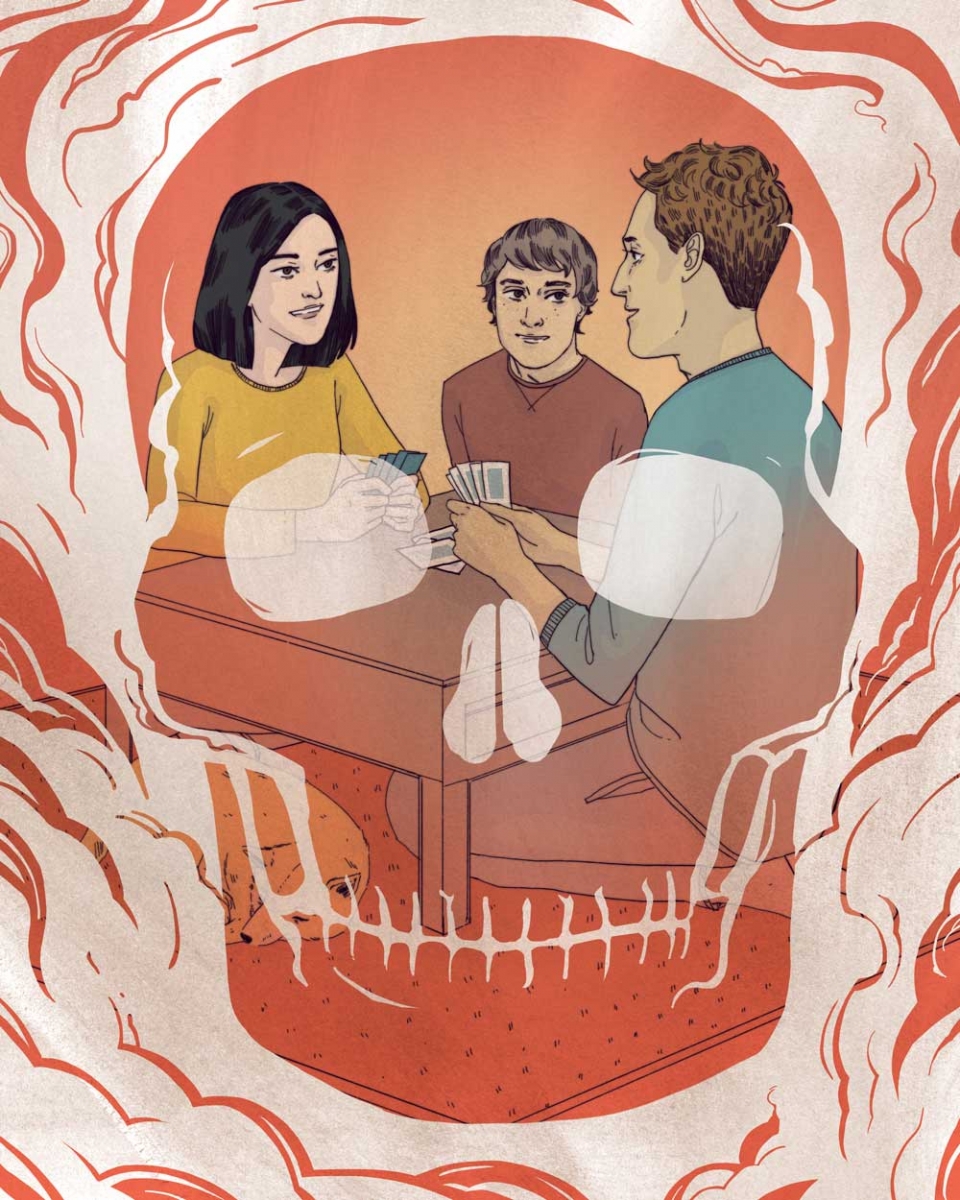 Despite causing 3,200 deaths in Canada annually as the second leading cause of lung cancer, radon gas is relatively unknown. The naturally occurring, colourless and odourless gas is produced from the radioactive decay of uranium in rocks and soil. It is extremely prevalent in the Canadian prairies and enters homes through cracks in walls, floors and foundations, and through floor drains and sumps. And once inhaled, radon gas causes DNA mutations that lead to cancer.

Two years ago, I had never even heard of radon. But since then, my husband Jason and I found ourselves embroiled in a sordid affair with the deadly gas. And we aren’t alone – either in being unaware of radon, or in having it in our home. According to a recent University of Calgary study, one in eight Albertan homes tested over 200Bq/m3 [becquerels per metre cubed, a unit of measurement for radiation], Health Canada‘s maximum acceptable radon limit. Because radon is colourless and odorless, testing your home is the only way to determine how much of this dangerous gas you might be exposed to.

We tested our home using a radon detector after our neighbours found out they had radon levels in the 500Bq/m3 range, with a couple of readings as high as 800Bq/m3. While a neighbour having or not having high radon doesn’t necessarily indicate that your home will, it kind of lit a fire under us to do the testing ourselves. Our level fluctuated in the 300 to 400s – well above the limit. Still, we weren’t very concerned. We’d already been exposed for seven years and counting. What was the harm in shelving it a while longer? Significant, as it turns out. The more we learned, the less we could ignore the risk, especially since we have two young kids.

Dr. Aaron Goodarzi, an assistant professor at the University of Calgary’s Arnie Charbonneau Cancer Institute and the lead author for the U of C study says that despite the Health Canada limit, research by the World Health Organization (WHO) has shown an increased risk of cancer at 100Bq/m3. The WHO uses the 100Bq/m3 limit as their action level. “At over 100Bq/m3, we advise to strongly think about mitigation, especially if you have young children,” says Goodarzi. “Kids breathe more and faster. Plus, little lungs are growing, and growing tissue is fundamentally more susceptible to the negative health consequences of radiation.”

Parental guilt definitely spurred our decision, but radiation is bad for everyone. From 2013 to 2016, Goodarzi and his researcher team tested radon levels in 2,382 homes in Calgary and surrounding communities. Nearly half tested with radon levels over 100Bq/m3. The WHO estimates the average lifetime risk of lung cancer increases by 16 per cent for every 100Bq/m3 of chronic radon exposure.

So, we had to mitigate. Typically, the cost to reduce radon in a home can range anywhere from nothing to $3,000. It usually involves sealing out the gas and installing a vent system to draw the gas out of the home. We contacted Radon West, the company that brought our neighbours’ radon levels down to 50Bq/m3.

Renata MacQueen, Radon West’s director of field operations, came to assess our situation. She experienced radon first-hand when she discovered her Cochrane home had a level of 2,400Bq/m3. Now she’s a fervent champion for radon awareness, testing and mitigation.

“I was dedicated to giving my kids a healthy start,” says MacQueen, “but they spent their first six years in levels 12 times Health Canada’s maximum guideline because I didn’t know to test.” She wants to help other families avoid the same mistake.

Our A-frame home doesn’t have a full basement, rather it sits on top of a dug-out crawlspace that we have jokingly referred to as the “Blair Witch basement.” After emerging from our crawlspace, MacQueen broke the bad news. Most mitigations are straightforward. Ours would prove to be anything but. Because the crawlspace was full of loose dirt and debris, there was no easy way to seal off or vent the area. We had a few options, none of them uncomplicated or cheap. We researched, consulted experts, flipped and flopped, and ultimately, we opted to dig out the crawlspace, pour concrete and add a vent system. That would come with a much heftier price tag, but at least we would get storage space and add equity to our home as well as peace of mind.

Then we hit another snag – no concrete company wanted the job. Many contractors came, but we never heard from them again. Weeks went by until Jason, who thankfully is handy and relentlessly hardworking, took on the grunt work himself.

With MacQueen’s guidance, Jason sawed a gaping hole in our living room floor, and spent nearly six months of his spare time crouched down in our home’s dark underbelly, digging, shovelling, securing pipes and posts, laying gravel, roughing in a vent system and covering it all with plastic sheeting in preparation for concrete. A vacuum truck came out twice to suck out more than 30 cubic metres of dirt. Finally, the concrete was poured, and our radon level dropped to 120Bq/m3.

Radon can move through concrete so we still need to complete the venting system, but for now, we can breathe in relative safety. Simply put, mitigation works. In fact, Goodarzi equates radon testing and mitigation to cancer-prevention programs. “More than 300 Albertans were told last year they have lung cancer even though they never smoked. That’s attributable to radon,” he says. “Radon is one of the most solvable causes of one of the most unsolvable cancers. It’s a Class 1 carcinogen – in the same category as asbestos.”

MacQueen notes that there is also a lot of misunderstanding about the danger that radon poses. “Radon is not something that builds up in your body,” she says. “The damage to your DNA is immediate – right that second. [But] people believe it’s a long-term risk because it could take 10 to 20 years or more for this DNA mutation to become radon-induced cancer.”

The U of C study also found that newer homes – those built in the last 25 years – tend to have higher radon levels than older ones. Goodarzi and his colleagues are collecting home metrics in the next phase of their research (evictradon.ca) to determine exactly why. They have nearly 8,500 additional homeowners province-wide participating, and the research group hopes to eventually look at long-term health effects. “Nobody is doing this kind of radon work yet,” says Goodarzi. “Alberta has gone from a desert of radon awareness to a quantum leap in three years.” He hopes increased findings will help inform policy and make a difference. And it already has.

This past December, the Alberta Legislature passed Bill 209 – the radon and awareness testing act – making it a government priority and testing mandatory for childcare facilities. The bill aims to raise public awareness, specifically among real estate buyers.

“Radon is a growing issue locally as more awareness and testing reveals some reason for concern,” says Steven Hill, a realtor with Sotheby’s International Realty Canada. “For a buyer with any concerns, they should have a property independently tested. If a seller were to perform testing, it will not necessarily add any monetary value to the property, but will contribute to buyer confidence. That is a different kind of value-add, especially in this soft market.”

Since November 2015, Alberta’s new home building codes require protections against radon entry as well as a mitigation rough-in. However, for existing homes, it’s all up to homeowners. And mitigation doesn’t typically involve months of backbreaking labour down a hole in your floor. Many effective remediation techniques are simple and cost very little. You can increase the air intake on your HVAC system, clean your vents, fix leaky sump pumps, seal up holes and ensure basement supply registers bring in fresh air.

As for us, despite the cost, stress and physical exertion on Jason’s part, we successfully ended our toxic relationship with radon.

If you’re still wondering if you should test, MacQueen puts radon exposure into perspective: “If your levels are averaging 200Bq/m3 annually, that is almost the same as 360 dental X-rays a year. I shake my head that I didn’t know to test my house for radon, but worried about my children getting one dental X-ray.”