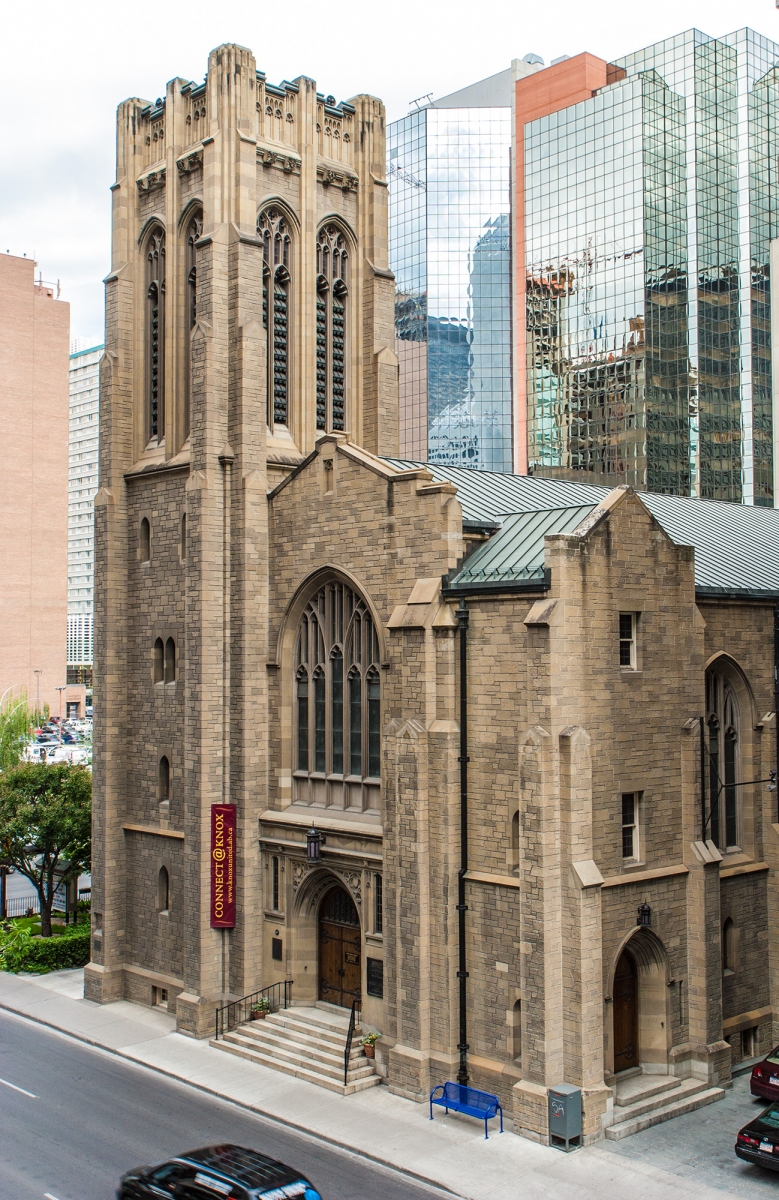 Strange as it sounds, Knox United Church on 4 Street and 6 Avenue S.W. owes its existence, in part, to a grocery store. Before the first Paskapoo sandstone cornerstone was laid in 1912, the Presbyterian congregation that would one day fill the pews of the church met at the I.G. Baker in Inglewood, where reverend Angus Robertson preached to a small crowd of 30 or so parishioners. Robertson would later go on to found the Union Cemetery in 1899. (He was also the cemetery’s first resident, after dying of typhoid fever a year later.)

In 1883, that same crowd of parishioners built its first wooden church. The 7-by-11 metre structure took 10 days to build, at a cost of $1,000. (That church was eventually mounted on skids and moved across the iced-over the Elbow River near where the York Hotel once stood.)

As Calgary grew, so too did church attendance. A second church was built in 1886 and then a third in 1905. Eventually in September 1913, the Knox United Church we know now with its familiar crenulated walls was completed.

Since then, the bones of the building have remained more or less intact. From its gothic arches to its exterior buttresses and even its pews and hand-blown glass lights, most of the church is exactly as it would have been when it first opened.

Designated both a municipal and provincial historic resource, there are only a handful of additions that can be made to the church, most notable among them is a meditation maze painted on the original Douglas fir floors in 2005, based off a similar labyrinth from a cathedral in Chartres, France.

Other spectacular features include the organ, which is an original feature of the church and the stained-glass window installed in 1921.

The church’s Casavant organ has more than 5,000 pipes in three separate chambers which, thanks to an upgrade in 2002, can now be played through an electronic keyboard hooked up to the system.

One of the more impressive remnants of the foundation is the Church’s massive Opus organ, first installed in 1913 by the Quebec-based The Casavant Freres, the largest pipe organ builder in the world. Apart from a rebuild in 1956 and an expansion in 2002, the organ has remained the same since its installation.

Because the tonal openings for the pipes had to be designed as part of the building, many of the pipes seen from the pews are purely decorative. Behind those, however, are over 5,000 pipes of various sizes, from only a few centimeters for the high notes to a 32-foot metal pipe for low notes. The wooden pipes produce a sound much like a woodwind, whereas the metal pipes produce a brassier sound.

“The Suffering of Mankind” was commissioned as a tribute to those members of the Knox congregation who fought and died in the First World War.

Most stained glass windows found in churches are typically ordered from catalogs and brought in from places like Toronto. Though this is true for many of the church’s windows, its north facing Memorial Window was actually a custom-ordered piece, commissioned in the aftermath of the First World War to commemorate the fallen soldiers who were members of the congregation. Titled “The Suffering of Mankind,” the window was made by the Pittsburgh Glass Company and installed in 1921. Among other things, the 9,982 piece glass window depicts dead and dying soldiers from both sides of the conflict, as well as knights representing virtues like nobility and brotherhood. Lists containing the names of those who served during the First and Second World Wars can still be found hanging by the left entryway to the church.