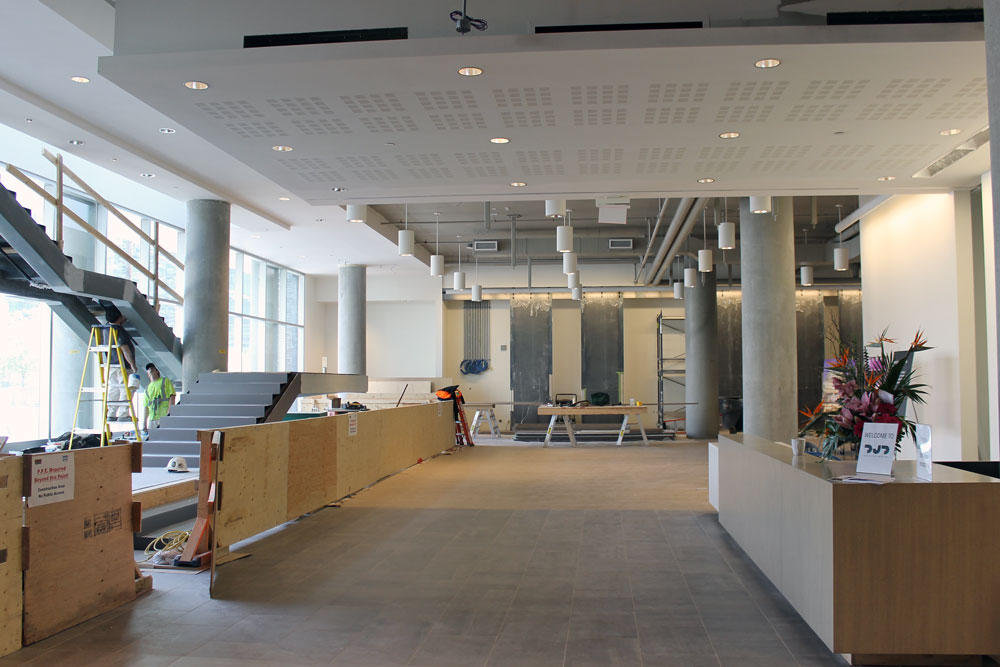 Vicki Adams Willis, the Decidedly Jazz Danceworks founder in residence, has trouble picking just one thing that she loves most about the new DJD Dance Centre. She loves the light – the building has huge windows, high ceilings and plenty of natural light, a stark contrast from the DJD’s first ever venue. (It was in a basement with no light at all.) She also loves that anyone walking or driving along 12th Avenue S.E. can see the dancing inside.

“You can only see inside the fourth street location from the Rose and Crown,” says Willis. “A few years, ago some businessmen were drinking in the bar. They dared their friend to come in and sign up for a class. He signed up for an African dance class – and loved it. He’s been coming back for years.”

Willis thinks the design of the new venue means this kind of thing will happen even more. She thinks the building will inspire Calgarians to become lovers of dance over and over again. With its big windows, it’s open and inviting – dance is no longer something that only happens behind closed doors. Simply, it’s going to bring dance to Calgary streets in a way that it hasn’t before.

The centre is part of The Kahanoff Centre expansion and was designed by Dialog. The Kahanoff II Tower includes the new DJD Dance Centre that has seven dance studios, and office space on the upper six floors rented to charities at 75 per cent of market rates. (The offices are already 95 per cent leased). Other arts groups in the city will also use the centre’s studios for rehearsals. The centre’s main studio transforms into a 230-seat theatre. The cityscape is its backdrop, meaning it’s possible for Calgarians outside the centre to see dancers’ day-to-day work and the energetic buzz inside on an event night.

And you can dance in this new space this weekend. The 24th annual DJD Dance Class Marathon takes place on Sunday October 23, 2016. Registration starts at $40 – pay $80 and you’ll be able to participate in all the classes during the day and also get a T-shirt, a water bottle and a five-class card. You’ll dance straight from 9:30 a.m. to 6 p.m. (You can take breaks if you want). Additional fundraising is encouraged, since the money raised goes toward the new DJD Dance Centre.

This is what you see as soon as you walk into the DJD Dance Centre. The lobby is still under construction, but once it’s complete, this will house the community living room space. It will be a 2,200-square-foot space that will have couches and desks. The space will be available to community groups and used for meetings, presentations, educational events, parties and readings. It will also be a place to mingle before practice or performances. 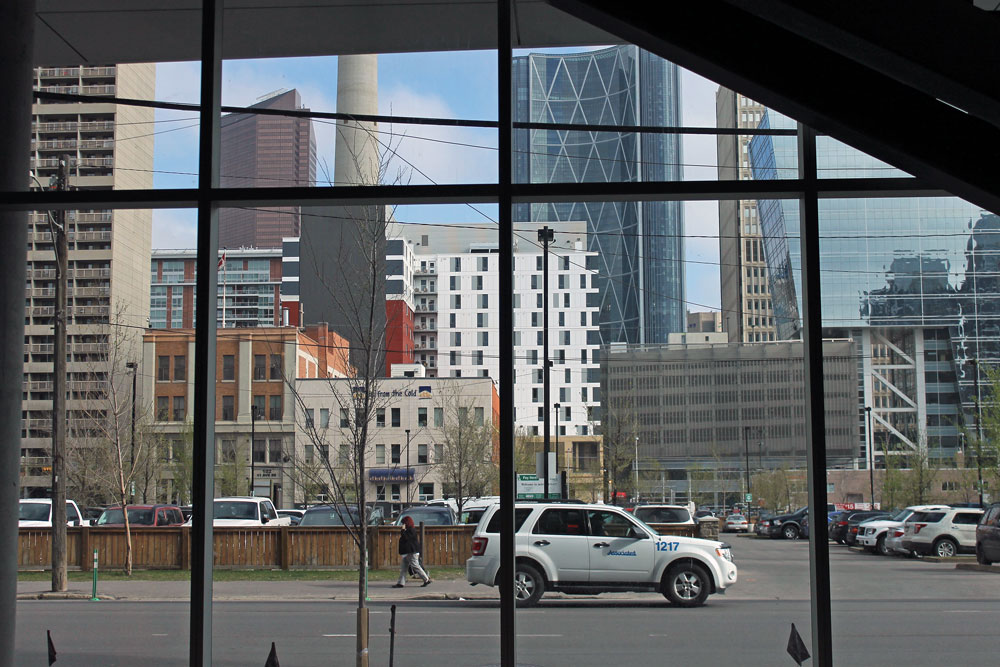 The view from the lobby out to 12th Avenue S.E. “The goal with the centre was to bring dance to the street and make it accessible,” says Janice Liebe, principal of Dialog, the architectural firm that worked on the centre. The venue was designed to have big windows to fulfill that goal – it’s easy to see the dancing going on inside the centre from the road.

To the right is the back wall of the main studio, which also acts as a theatre. Liebe says the main studio is a different kind of theatre for Calgary because its back wall is glass so passersby can see dancers working. Or, there are three levels of curtain to make the theatre a black box. The space to the left can be used as a gathering space on event evenings. 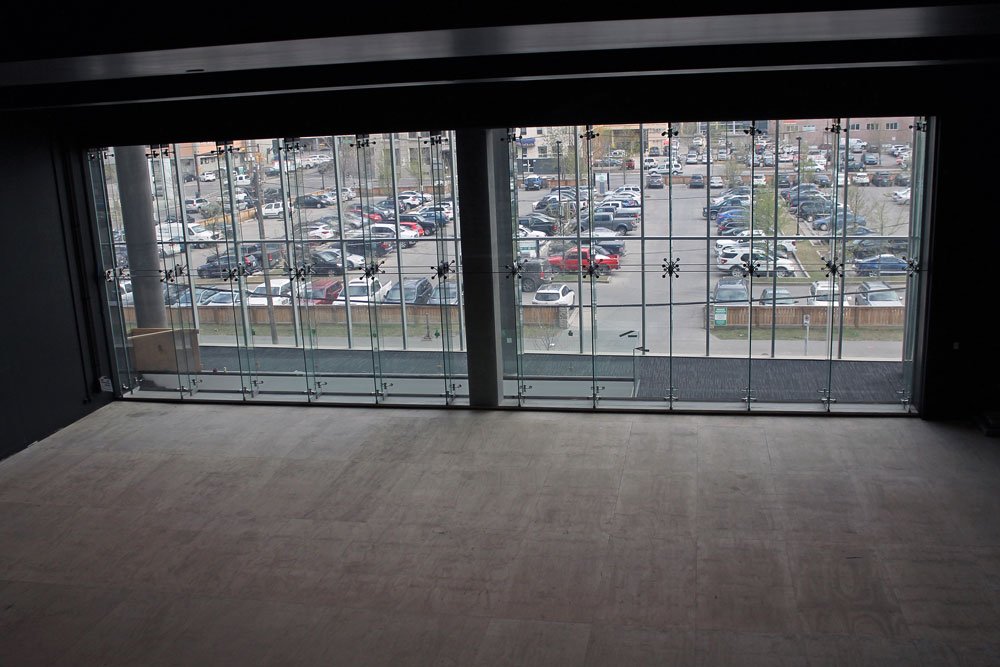 A look into the two-storey, 3,600-square-foot main studio. The studio has rigging, stage lights, AV/projection capability and seating. As well as a big practice space, the studio has everything for high-level performances meaning DJD can create, rehearse and perform in the same space for the first time ever. 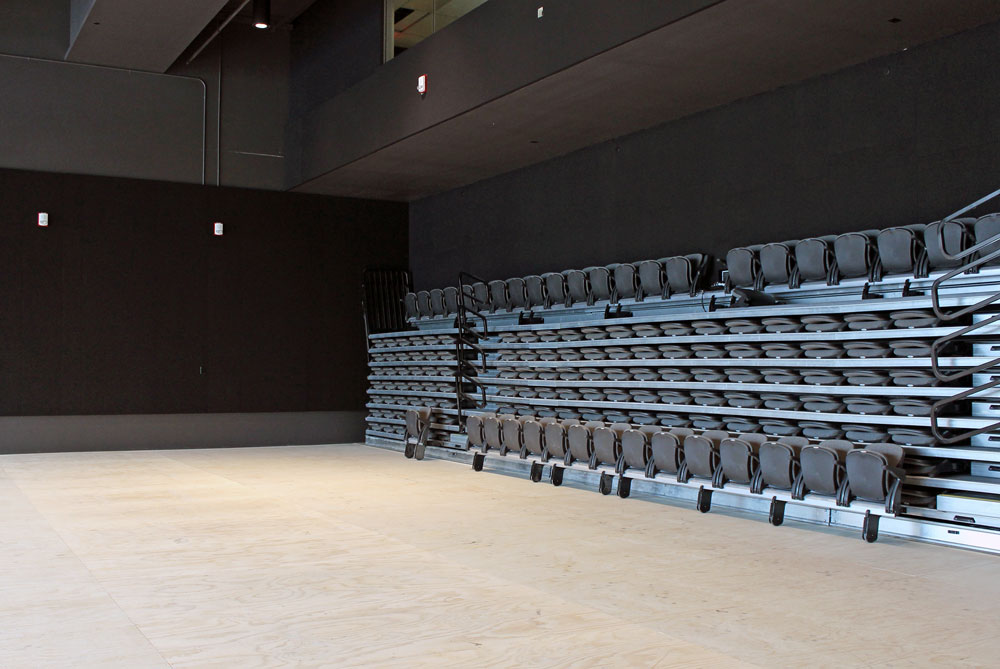 Usually this studio will be used for rehearsals, but since it’s the venue’s biggest studio, it will also be used for performances. There are 230 bleacher-style seats that will be pulled down for shows. The first performance here will be DJD’s New Universe, which premieres on May 27. 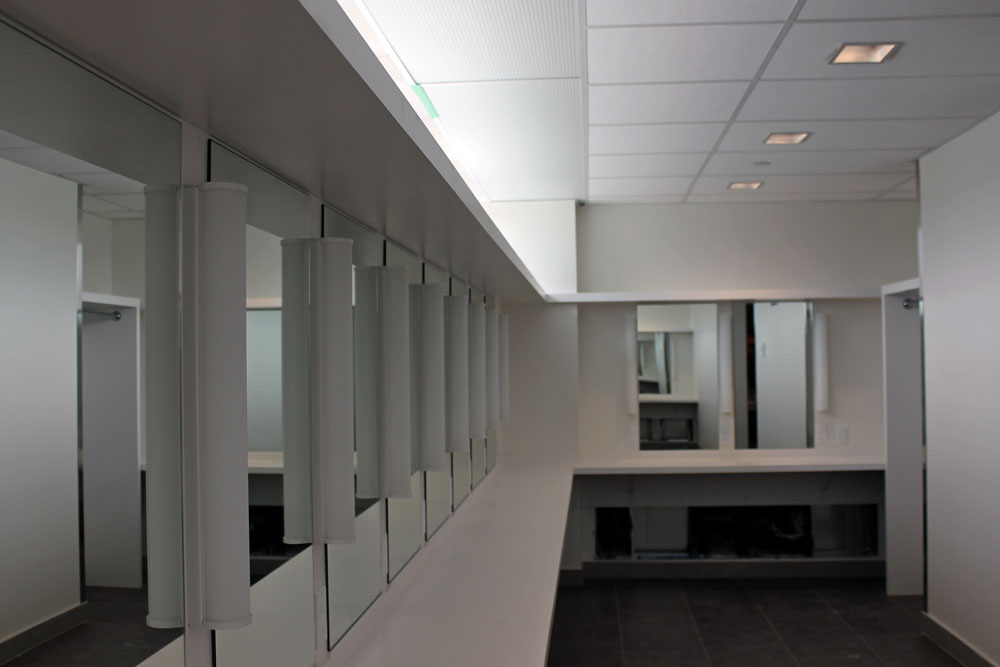 The dressing rooms are a big upgrade from the ones in DJD’s previous venue. They’re big, they’re bright and they’re spacious. Arts groups renting rehearsal space in the centre will also have access to the dressing rooms. 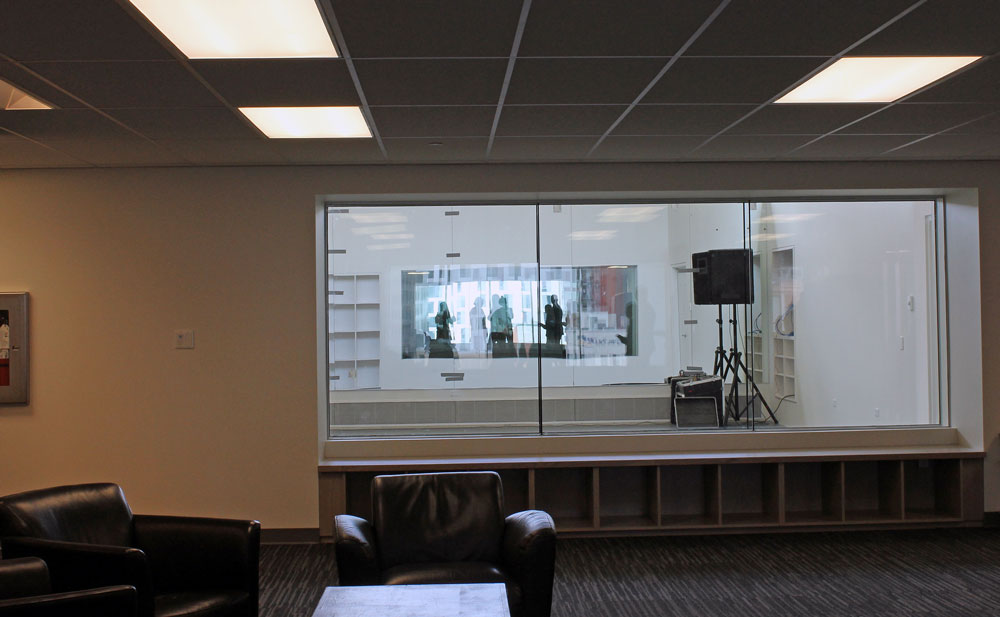 There are a total of seven dance studios in the new centre. Kathi Sundstrom, DJD executive director, says there’s a long list of arts groups who will be using these spaces, including Alberta Ballet, One Yellow Rabbit, Dancers’ Studio West and Fluid Festival. There are also chairs in the common areas between the studios, encouraging mingling and interaction. 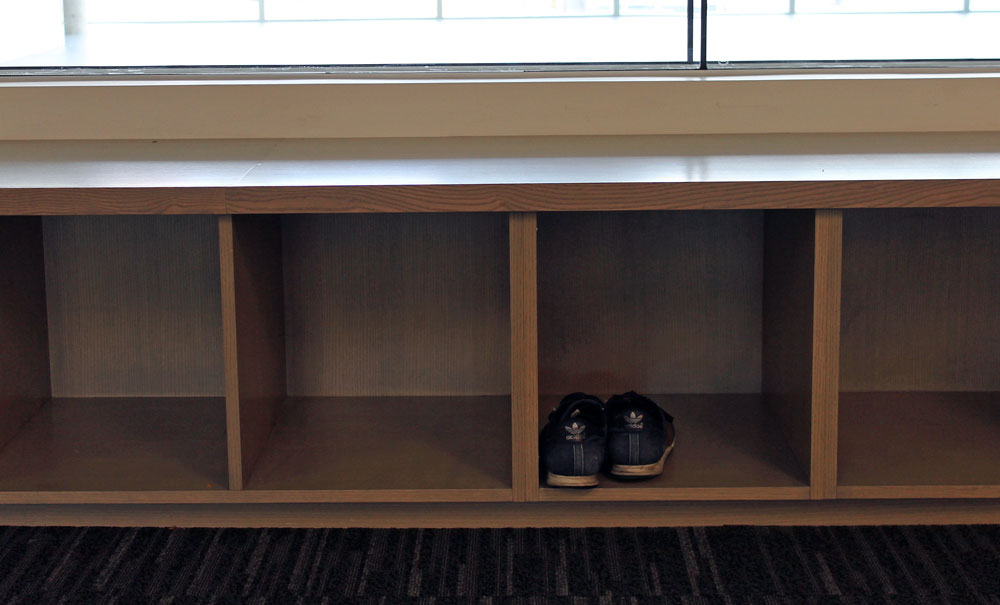 Outside each studio there are cubbies for dancers’ shoes. The studios have specially designed floors and outside shoes can’t be worn. According to Liebe, the floors are layered: there’s a structural floor, an air space (this makes the floor a little bit springy and also helps soundproof the room) and then the cast floor. The floors have screws that crank so that the air space can be added. 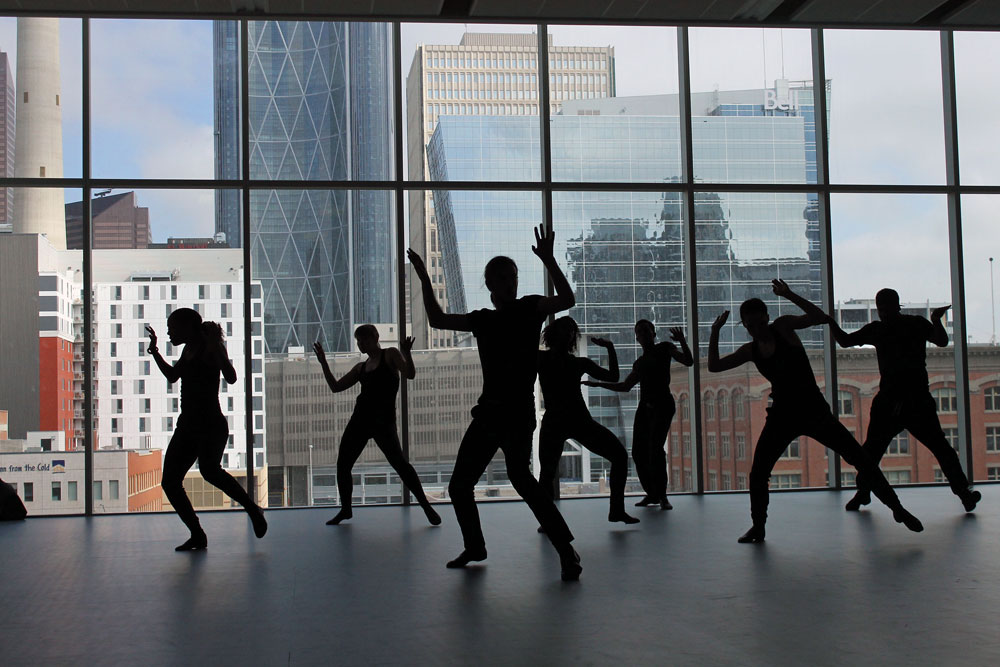 Performers in the upcoming show of New Universe rehearse in Studio 5 under the direction of DJD artistic director Kimberley Cooper. The show, which will be performed downstairs in the main studio and theatre, is inspired by insects and nature. There’s even an aerial element – it’s possible thanks to Liebe’s design of the main studio – and some puppetry. 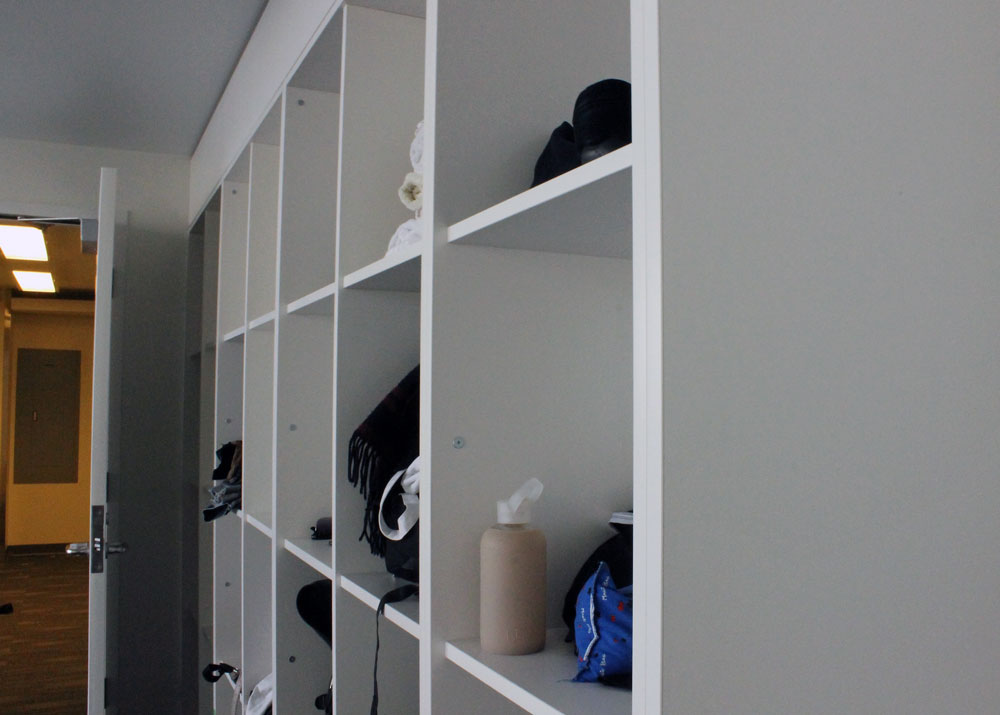 Each studio has plenty of storage space to put personal items while you practice. 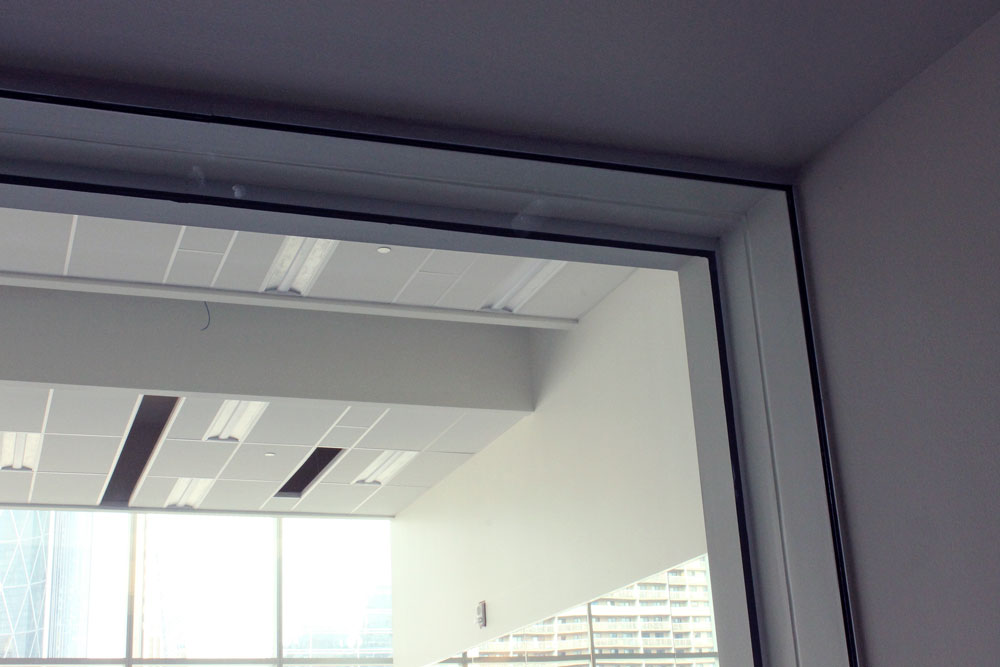 Liebe says that making the studios as soundproofed as possible was important, considering there are as many as four studios on one level and offices above the studios. To reduce the spread of sound, Liebe said something called “box in box” construction was used. There are two panes of glass all around the studio (apart from the door) to act as an acoustic buffer. 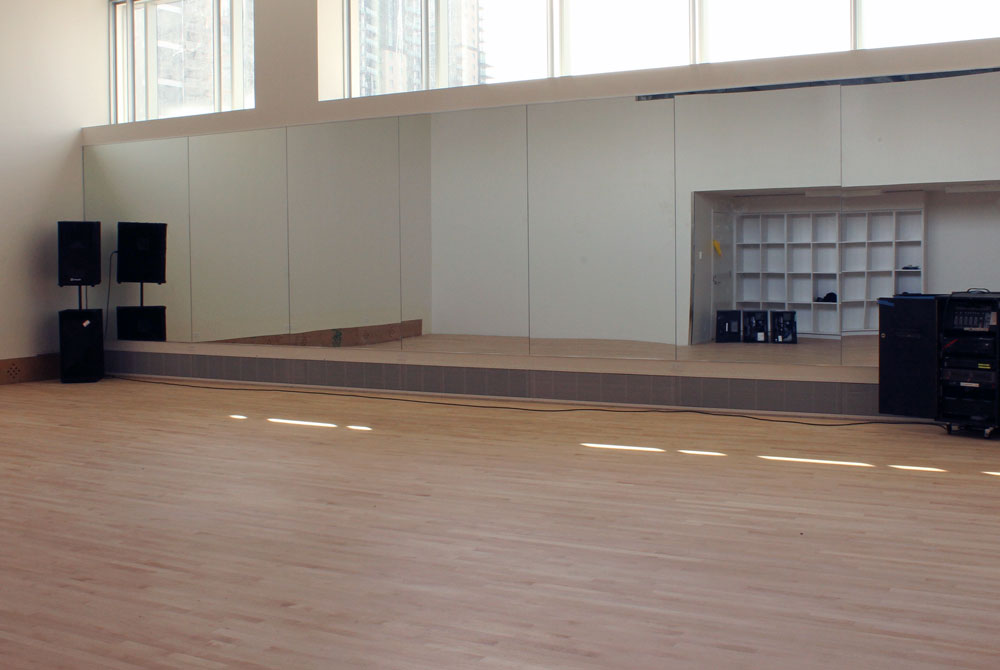 Different studios are more suited to different genres of dance. This room is specific to tap dancing because of the hardwood floor. 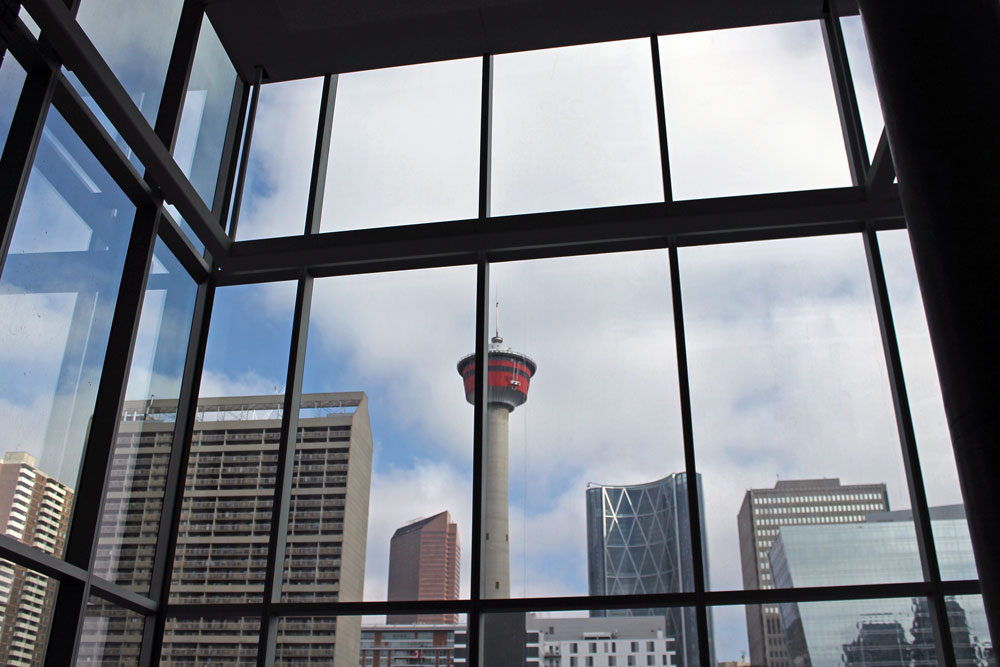 The view out from the DJD Dance Centre from outside the main studio. 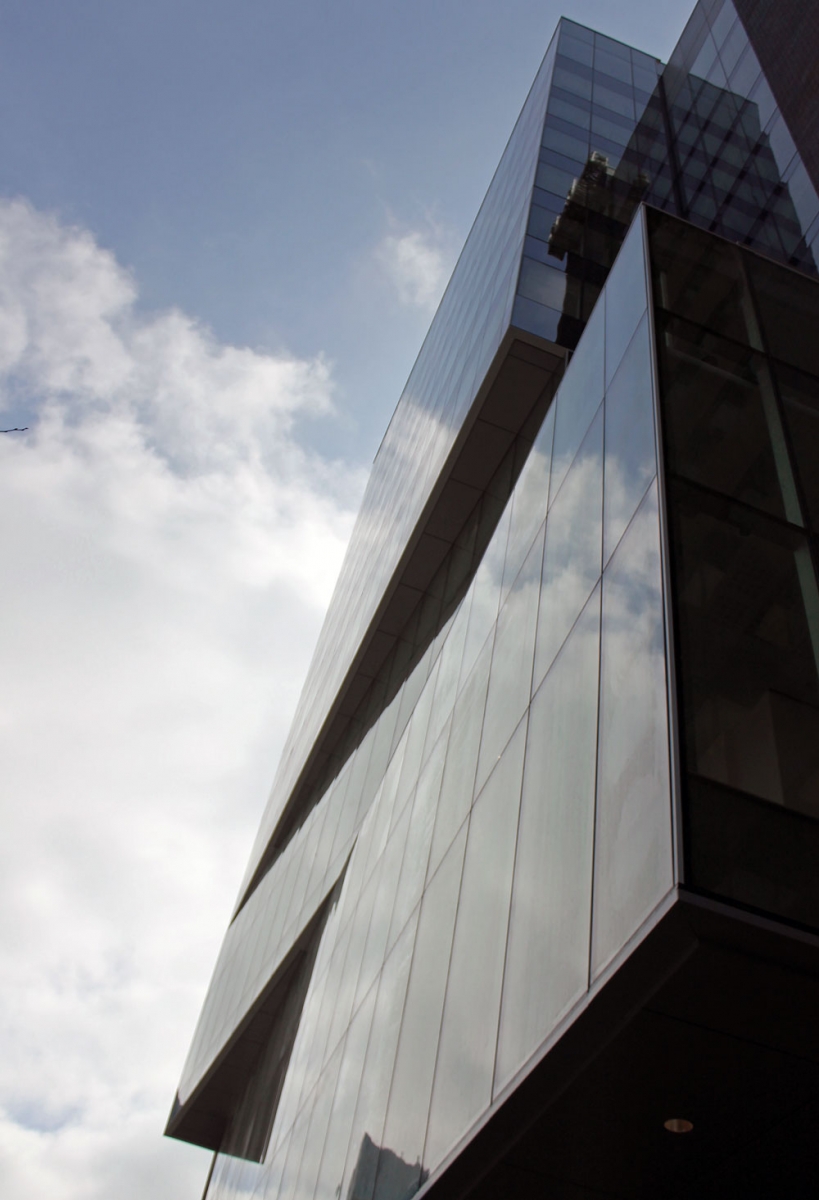 Outside the DJD Dance Centre. “From outside, the building looks like independent glass boxes,” says Liebe. “From underneath you get a real sense of the dynamism of the building.” There’s a sense of movement, like the building dances too. 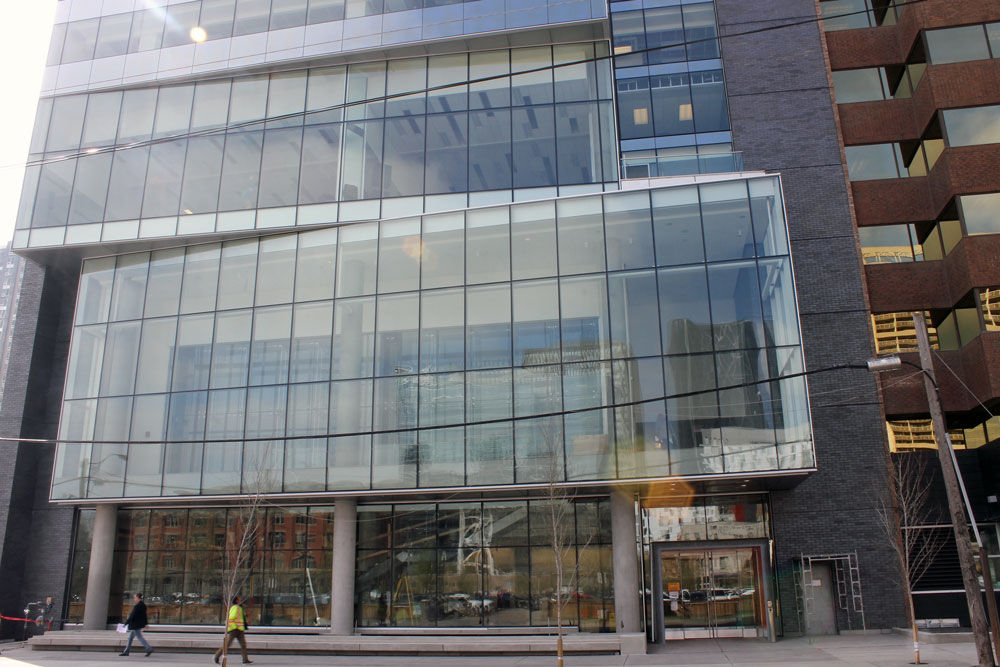 It will be possible to see the activity in the centre during the day, and at night, the lights from the building will illuminate out into the street. Liebe adds, “At the top of the building there will be a colourful, commissioned piece of art.” She can’t say much yet, except that it will be the beacon of the DJD.