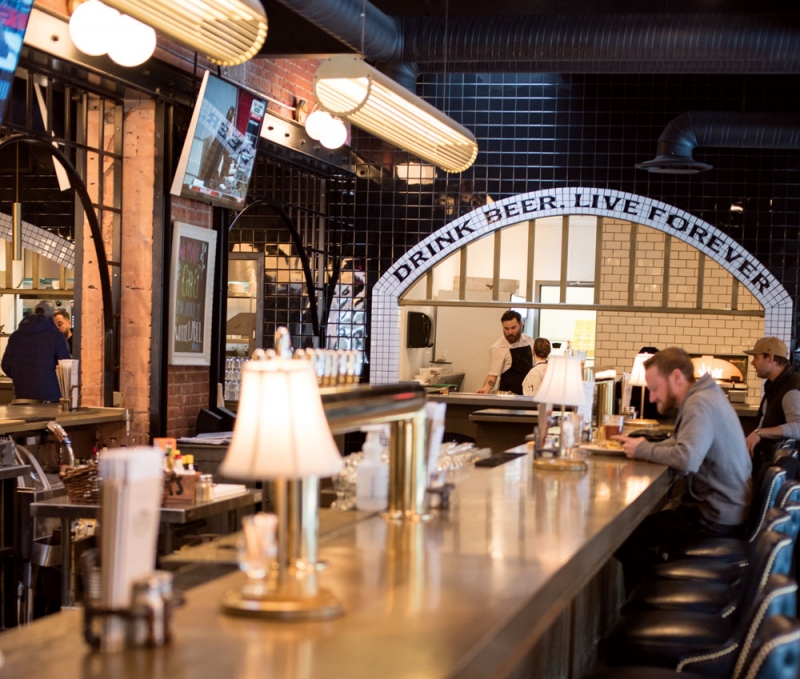 It has never been easier to get a good pint of beer in Calgary. Thanks to a relaxation of brewery-related rules by the AGLC in December 2013, the city has seen an emergence of brew pubs. What differentiates a brew pub from a gastropub (e.g. Unicorn Superpub) or a beer hall (e.g. Wurst) is that it brews beer on-site in addition to serving food. Not only does this mean you’re getting the freshest pint possible – it also means that you’ll to be able to try some experimental brews and seasonal creations that you won’t find anywhere else.

In operation since 1991, Brewsters is the longest-running brew-pub operation in Calgary. The company has five locations around the city, plus a pizza restaurant called Beer Revolution, and its brews are available at many liquor stores. For the true brew-pub experience, head to the southeast industrial location at 55th Avenue and 53 Street. S.E. where all of the brewing takes place.

Part restaurant, brewery, distillery, cocktail bar and barber, Last Best wears many hats. Most of its creations like the Show Pony pale ale or Dirty Bird black lager are easily found at other bars around town, but you’ll need to go to the brew pub in the Beltline to sip their unique seasonal beers.

This sizeable set-up on 17th Avenue S.W. is a welcome addition for those headed to Flames games and neighbourhood residents alike. Signature and seasonal beers are made on-site on a rotating basis, while the 20-plus portfolio of Mill Street beers is always available on tap. Operated by Creative Restaurants Group, which owns Bonterra and Cibo, among others, the brew pub’s menu was developed by chef Glen Manzer and is a worthy match with the excellent beers.

This multi-level space on 17th Avenue S.W. gets pretty lively on the weekends and even more so when the weather warms up and the 15-foot windows can be opened. The brewing takes place in the lower level, and from the bar you can see the tops of the steel tanks poking through the floor. Trolley 5 makes six signature beers, including a white IPA and a porter, and also likes to keep things interesting by doing one-off collaborative brews with microbreweries around town like The Dandy Brewing Company.