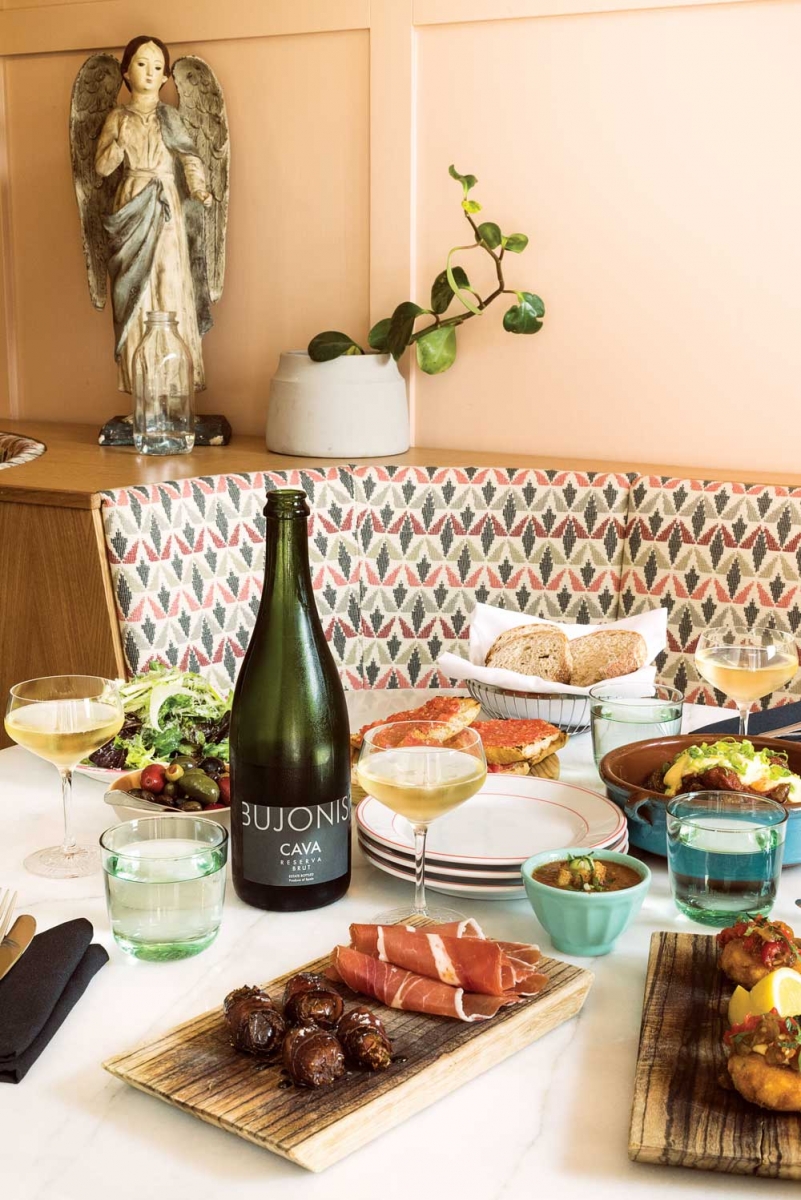 Cava is the sparkling wine of Spain, and uses both international and indigenous grapes not commonly found elsewhere in the world. It is generally inexpensive, fizzy and ubiquitous at New Year’s Eve celebrations and at brunch.

The winemaking history of Spain goes well back to the Phoenicians and the Carthaginians several thousand years ago, but sparkling wine in Spain has a much shorter history. The first sparkling wines in Spain seem to have emerged around the mid-to-late 1800s, but it wasn’t until 1974 that the export of Spanish sparkling wine became significant enough to garner interest. This follows Spain’s agreement in 1970 to stop calling its sparkling wine champaa (as it was much too similar to you-know-what for the French) and cava came to be.

Cava, quite simply, means “cellar” or “cave” in Catalan and is used to describe most sparkling wine produced in Spain. After getting burned by Europe’s Common Market in regards to its sherry industry (despite Jerez and its environs being the home of Sherry, English “sherry” like Harvey’s Bristol Cream was able to continue using the name because it was grandfathered), in a bold masterstroke, Spain simply drew the boundary of cava production around where the producers were located – about a third of Spain.

Most cavas come from Catalunya, specifically the area around Peneds, with the municipality of Sant Sadurni d’Anoia the centre of production. For the most part, cava is made from macabeo, paredella and xarello grapes, though chardonnay and grapes like garnacha, monastrell, and pinot noir are permitted. Trepat, an uncommon variety, is also used, but only in ros cava.

Cava is made in the method traditional, where the second fermentation (where the bubbles come from) takes place in the bottle through the addition of yeast and sugar. However, rather than doing it by hand as they do in Champagne, most producers use automatic gyropalettes, a quicker and more cost-effective way to remove the yeast cells after they do their work. With vineyards representing a much smaller investment than those in France, and the cost of production being lower as well, cava is much easier on the wallet than many other quality sparkling wines.

The world of cava is dominated by a few very large companies. Freixenet (of frosted black bottle fame) and Codorniu account for the vast bulk of cava production. The success of its largest brands might have led to an overly “commercial” perception of cava, but that isn’t to say the Spanish aren’t capable of making some excellent wines that remain very cost-effective.

Recently, in an effort to create a premium category for cava, producers have opted to create a new formalized quality tier, since cava lacks any formal “crus” or regulated prestige terminology. Now there is a tier called Cava de Paraje Calificado, which is focused on controlled yields, the companies vinifying their own wines (as opposed to purchasing base wines), and at least three years of bottle aging. As this new tier becomes more prominent, we should see more of these wines in our market.

Cava generally pairs well with tapas or sushi. But it also works exceptionally well with fried foods – not only fried chicken, but also salty snacks that come in crinkly bags. Its flavours are well-suited to shellfish of all types, and can be a solid match with a variety of salads including those with bitter greens, citrus and nuts.

Though most bottles are made for immediate consumption, cava can age fairly gracefully. Interested in aging cava? Try it with some of the more expensive bottles, or do what I do and forget you have one or two in the cellar for a few years. You might be in for a pleasant surprise.

6 cavas you should try

One of the finest cavas available, and a ros, too. Deeply coloured (for ros) with slightly bruised strawberry and cherry fruits, brioche and mineral aromas. Flavours are intense with clean berry fruits, plenty of depth and a long, almost tart finish. Drink or keep – it’s delicious either way. $55

A sweeter style of cava, and one that might be more suitable for casual sparkling-wine drinkers. Look for tropical fruits, a decidedly pineapple-like character, as well as richness on the palate. Tired of off-dry gewrztraminer with spicy Asian-inspired cuisine? This might be your new best friend. $20

Using the traditional varieties of macabeo, xarello and paradelle, look for a citrus aroma with plenty of toasted almonds and apple. Light and crisp with great acidity, the mild nuttiness on the palate would be perfect with sushi (or chips). $21

Possibly the first “premium” cava in our market, just as popular for its packaging as for the wine inside. Lemon and lime lead the way on the nose with mineral and saltine-cracker toastiness on the palate. Lots of depth and great balance – a deal for the price. $30

One of the few producers making wine strictly from its own vineyards, the quality in this bottle is noteworthy. Deep expressions of toastiness and sourdough bread lead off, with citrus and apple flavours following. Rich and almost powerful in the mouth, it’s a pleasure to drink. $30

Oh, hello there, little charmer! Lively green-apple fruits, a little herbaceousness and spiciness, and just a touch of succulent leaf make this very well-priced cava a treat on its own or mixed into a cocktail. $17

Try these pairings at local restaurants

Dine the Spanish way with a selection of pintxos. The Spanish Table at the recently renovated Ox Bar de Tapas (formerly Ox and Angela) features olives, meats, bread and other yummy bites, which pair perfectly with the mineral-driven and crisp Bujonis ($9 for the glass, $50 for the bottle).

Sometimes you just need the little pick-me-up that comes with a glass of sparkling wine. But if you’re the only person at the table ordering it, consider the Segura Viudas Brut in a 200-millilitre bottle ($11) – perfect with the tuna tataki starter.

It’s best known for its pizzas, but there are plenty of other things worth eating at Una, too. Try matching the garlic prawns (or the kale Caesar) with the crisp and toasty Pares Balta brut ($38). You’ll likely need a second bottle for the pizza you’ll inevitably end up ordering, as well.