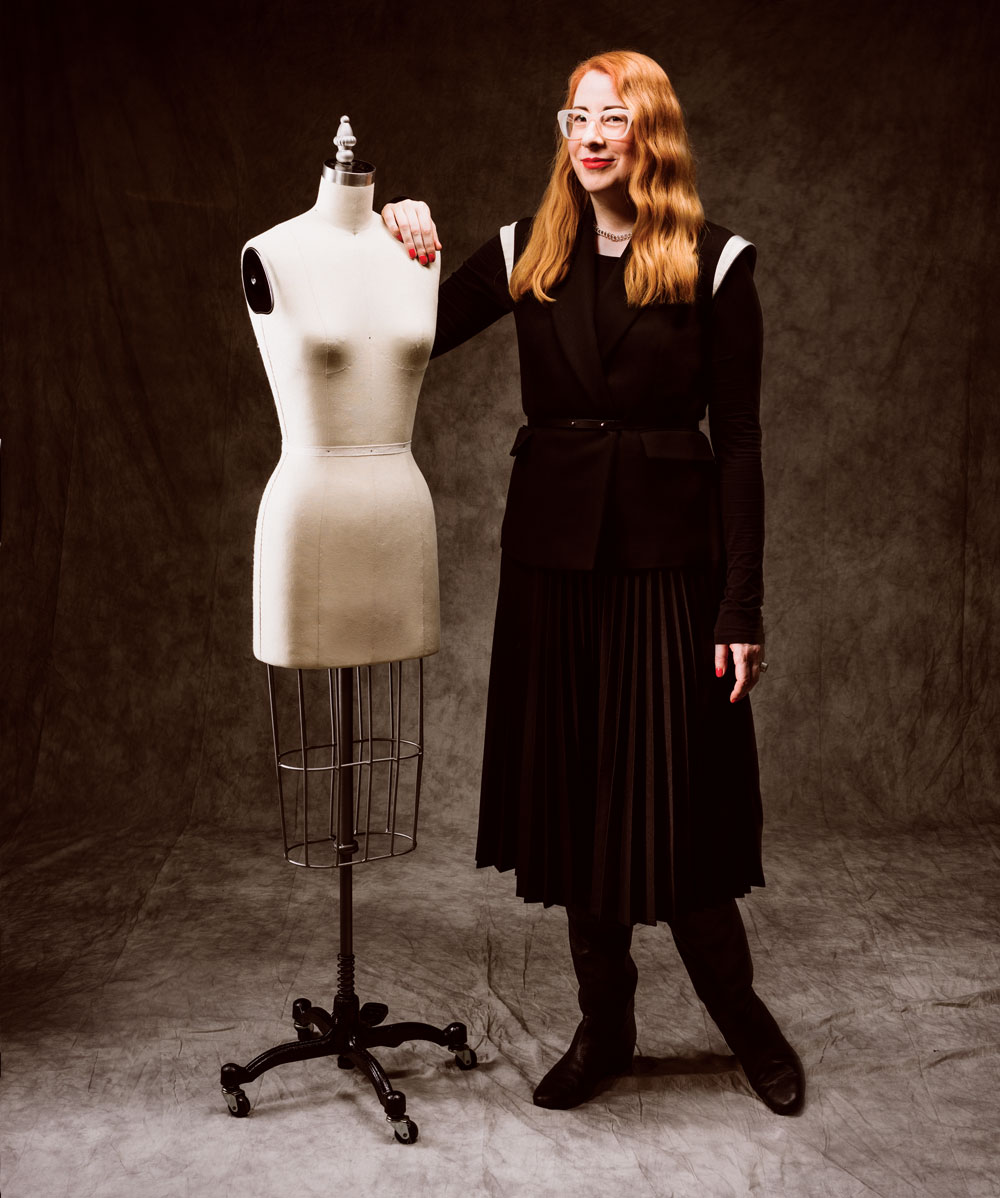 In Leah Van Loon‘s nearly 20 years as a Calgary-based fashion stylist, she has had the opportunity to work with many prominent local fashion and accessories designers in various roles, including collaborator, stylist, mentor and muse. But, in the fashion editorials she has styled for various magazines and websites, she has never felt she was able to showcase local designers’ work to its fullest.

“I wanted to find a way for me to work with the designers specifically and provide an opportunity for us to work more closely,” she says. So she decided to take a different approach and create an editorial feature around the work, giving it centre stage, allowing the designers to not be bound to a specific season, client or artistic constraint of any kind.

Acting as contributing fashion editor for Avenue, Van Loon collaborated with six of Calgary’s most celebrated designers – Lauren Bagliore, Andrea Blais, Haithem Elkadiki, Paul Hardy, Kat Marks and Lara Presber – to create iconic pieces that would not only represent each designer individually but also work in context of the other designs featured.

“It was really an opportunity to work together in terms of a stylist and a designer,” says Van Loon. “Often, stylists will direct designers if there’s something specific they want for an editorial, which is sort of where I was coming from.”

Van Loon met with each designer to discuss their own brand identity and artistic direction. She encouraged risk-taking, and, since the designs were never intended to be practical or even necessarily wearable, full artistic exploration was key.

“A lot of things have to be considered when you’re doing something for a photo shoot, as opposed to for someone to wear in real life,” Van Loon says. “For this, I really wanted it to be something a little bit more extreme, something a bit more editorial and something that you wouldn’t necessarily see walking down the street. Something special.”

Sometimes, Paul Hardy just won’t take yes for an answer. Perhaps that’s why he and Leah Van Loon have had such a long and fruitful relationship, both as friends and as collaborators.

“I don’t really like associating with ‘yes’ people. I think it doesn’t aid the creative process in any way if you’re not challenged,” says Hardy. “I’ve always appreciated [Van Loon’s] design aesthetic because I think a stylist approaches things much differently than a designer, and they can bring a fresh perspective because they’re not as close to the work.”

As expected, agreeing on a final design required a considerable amount of dialogue. Van Loon had originally wanted each of the designers to create a piece that stood alone, with no reference to their body of work. But Hardy pushed back, saying he wanted to design a high-concept couture piece using custom-made Italian laminated stretch wool that would serve as a glimpse into his creative process.

“The inspiration of this dress really influenced the ready-to-wear pieces that are going to be available,” he says. “So it’s sort of a visually relatable concept for people to understand how things go from one-of-a-kind couture down to ready-to-wear.”

It’s not every day that Andrea Blais gets to work on such a large scale. Usually, the jewellery designer and goldsmith crafts small, delicate pieces for day-to-day wear from her Calgary studio. Knowing that Blais’s piece would be photographed on a full-length dress form, Van Loon encouraged the designer to work outside her comfort zone and create a necklace that was not only representative of her work but also a true statement piece.

The end result is a multi-faceted necklace made of 38 silver pieces all linked together by rings that are handmade from wire. Work this finely detailed and grand in scale takes time, though. “You probably wouldn’t believe me,” Blais says. “I think it took about 100 hours; it’s very labour-intensive getting that high polish.”

Each facet of the necklace gives viewers a distorted reflection of themselves and their surroundings, providing a highly interactive and surprisingly organic experience.

“The piece is called Plume,” says Blais. “It takes the idea of a feather, but heavily stylizes it into a simple form and then adds that mirror finish to take it to another place.”

Sometimes, timing is everything. When Van Loon approached Calgary- and New York City-based designer Lauren Bagliore to collaborate on a piece, the designer was fortunately in “go-go-go” work mode. Bagliore just happened to be at her New York studio working on her pre-fall collection, allowing her to dive into the design process.

Originally, Bagliore wanted to work exclusively with leather, but Van Loon upped the ante and encouraged the designer to create a design that not only incorporated leather elements, but also featured her signature draping and tailoring.

“She challenged me in that way,” says Bagliore. “When you have something in your head and someone is kind of directing you in the other way, it’s nice to take that and come together as a collaboration.”

The inspiration really took flight after Bagliore found the sumptuous Italian brocade she used in the piece. “I saw how it cascades and thought, ‘It would be so amazing if I could make a cape that’s a stand-alone piece, but that would have the signature kind of drape beyond that architecture,'” she says.

The designer was so inspired she went on to create a mini-collection she has dubbed the “Avenue Collective by Lauren Bagliore” – four pieces that can be worn interchangeably.

“I thought, I’m just going to go with it,” Bagliore says. “When you’re inspired as a designer, you just follow it and honour that creativity.”

The inspiration for Haithem Elkadiki’s dress design came in a dream. After consulting with Van Loon, a long-time friend and mentor, they decided that he would create a piece that incorporated the hallmarks of his designs – it would be a finely tailored nod to both womenswear and menswear, but still be fun and sporty, with a sense of humour. The final touch came to him two nights before the photo shoot.

“I dreamt it,” says Elkadiki. “It was that scene with the twirling bag in American Beauty.”

Elkadiki translated the dream to the use of his trademark KaaDiki face appliqu, which he applied using a variety of camouflage prints and leathers to be intact at the top of the garment and gradually deconstruct toward the hem.

The collaboration process with Van Loon was anything but scattered, though. “As a creative person, as a designer, sometimes you get lots of ideas and you lose vision,” Elkadiki says. “And Leah really helps me to refine it and stay on course.”

There was never a debate over which material Kat Marks would use for her design. As one of Calgary’s most creative and celebrated accessories designers, she is known for her innovative leatherwork.

After discussing her unique vision and fashion-forward approach, Marks and Van Loon decided to focus on creating a leather piece for the waist. Marks chose to use a bold and vibrant veg tan and, for added luxury, incorporated stingray, a rigid hide that requires special machinery to cut.

Taking the materials as the main source of inspiration, Marks created the piece directly on the mannequin. “I like to call it intuitive design, rather than a visceral process, where I’m going with my instinct in what I’m creating,” she says. “I feel it rather than think it.”

For Marks, collaboration is a big part of her fashion practice, and working with Van Loon was a “breath of fresh air.”

“I think sharing and being part of a team and doing something bigger is really important, especially in fashion,” says Marks. “We’re all a different part of this big wheel that runs in fashion, and I think there’s so much to be gained from melding minds together.”

As a fashion designer who is also a very busy Calgary-based architect, it’s no surprise structure is a key component to Lara Presber’s designs. It was with this background knowledge that Van Loon encouraged Presber to create a piece that would not only incorporate her aesthetic but also be something she’d never normally do.

“I feel like I’m quite conservative and modest and my clothing is quite elegant and usually professional for the office,” says Presber.

To break free from this mould, she chose to create something a bit more revealing. Inspired by one of her favourite buildings in Paris, the Foundation Cartier, an obscure architectural gem tucked away in the 14th arrondissement, Presber translated the building’s various layers of grid work to her garment.

The dress features a rigid structure, but then uses that framework as a way to break the rules. Sometimes, what is underneath is revealed and you see the grid; sometimes, it’s fully covered – in this case with sequins attached to opaque backing, Presber’s favourite material – and, sometimes, it’s covered with opaque fabric.

Not being confined to the need to sell the finished product, Presber was free to design the highly conceptualized dress without constraints. “Sometimes, you just get to make something that is just for fun,” she says. “You can just make it for the sake of art.”