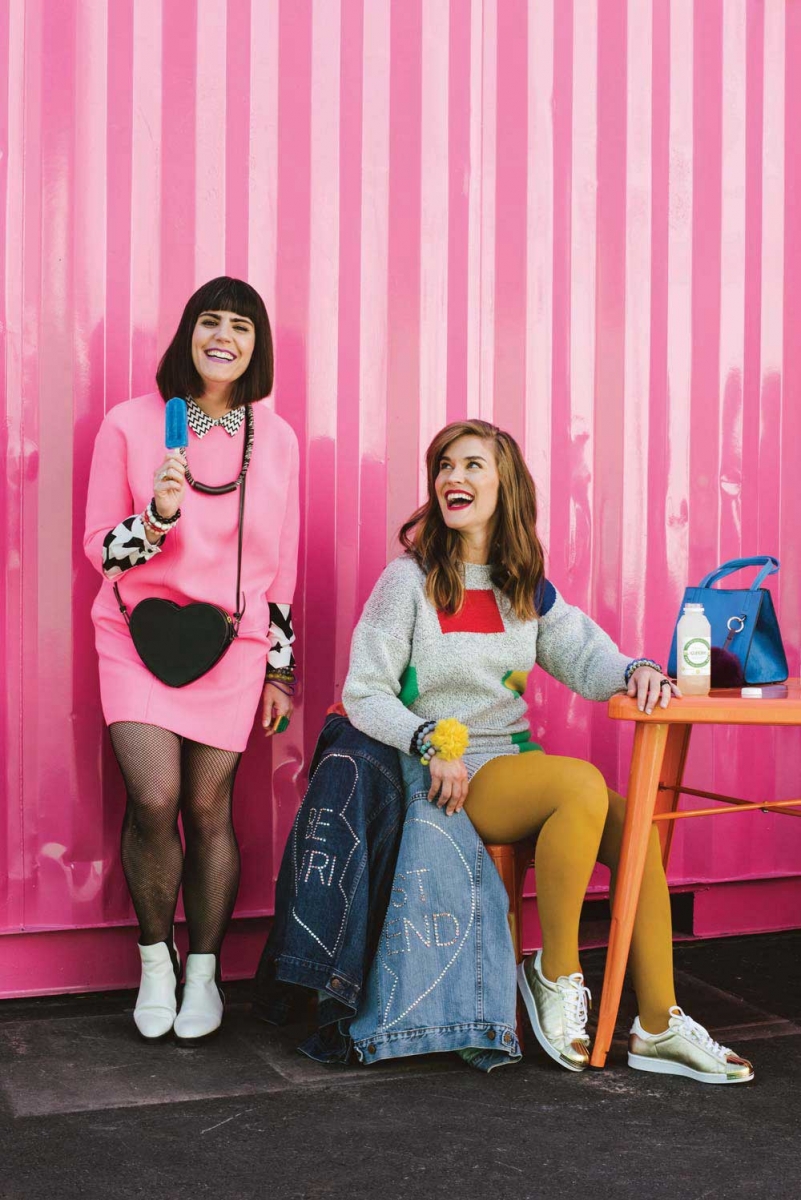 Friends since their childhood days in small-town Alberta, Kayla Browne and Suzanne Stewart both moved away to pursue post-secondary studies. They remained in touch over that time, however, and found themselves reunited when work opportunities in their respective fields (Browne is an architect and Stewart a nurse) enticed them to move to Calgary.

Upon arrival, both Browne and Stewart were similarly struck by the city’s fashion colour palette, awash in shades of grey, black and navy – a distinct contrast to their shared love of bold, bright colour.

The two style connoisseurs wanted to connect with others in Calgary who had a similar aesthetic. They were also looking for a creative outlet beyond their professional lives. So, in 2013, they co-founded The Neat Blog, channelling their creative energies into writing about fashion, food, music, art and design. Their enthusiasm and dedication has since paid off as The Neat Blog has gained a loyal following in Calgary’s fashion scene.

Currently, The Neat Blog has grown to feature a number of other contributors, though the easygoing chemistry between Browne and Stewart remains the heart of the project. In addition to being a way to reach people with a likeminded sense of style, The Neat Blog has also been a way for the two long-time friends to connect and spend time with each other.

What sparked the idea to start The Neat Blog?

Suzanne Stewart At the time, I wasn’t even living in Calgary, I was in Vancouver. Kayla had just moved to Calgary from Sydney. I remember I had lived in Calgary before, so we did talk a little bit about fashion and how we felt we didn’t really relate to the fashion here. We thought it would be a fun way to play around with that and show people what we liked.
Kayla Browne We’d been apart for a long time, and we felt like it was a way for us to connect and spend more time together and do something together that we’re passionate about.

What kind of reaction have you gotten from readers?

S.S. It has really allowed us to meet people. We don’t have a ton of followers, but the ones we do have seem to be very loyal. It validates what we thought – there are people out there like us.

How has the blog influenced your own fashion?

S.S. It hasn’t changed how I dress; I have always dressed the same way. But it has made me think a lot more about fashion, because we have this rule with the fashion posts where we don’t just want to talk about the outfit, it has to have some sort of a theme or a message. So it has made me not just flippantly think about fashion. I actually have to do some research and question why certain trends are coming in.
K.B. More and more, I try to make conscious decisions about where I’m purchasing things. When I [went] to Montreal, I found so many local designers that I loved, and I’ll make a note to purchase things either from them, or write their names down and feature them on the blog or buy something from them in the future – which I think we both do. Whenever we’re travelling, we’re always making notes of local makers and doers.

How would you describe each other’s personal style?

S.S. We’ve coined this term for Kayla of “business-edgy.” Kayla is never casual. I see her in jeans maybe once a month. Maybe. And they won’t be regular denim. Kayla has this really innate ability to put things together that I don’t think anyone else could. Off the rack, you would never think those things go together and then when she puts them on, it’s like everything comes together.
K.B. Suzanne wears lots of sneakers, which is perfect because the after-hours look is her thing. And she has, like 250 pairs of jeans – so much denim – which is also a casual look, and then always some sort of a funky top, not as much jewellery. Suzanne likes certain, specific bright colours, but in general more of a muted palette. So I would say she’s “edgy-casual.”

How would you describe your shopping habits?

S.S. When I was younger, I used to just go hard and not pay attention to how it fit into my wardrobe and sustainability and the lasting nature of a piece. Now, as I’m getting older, I want things to be in my closet for a long time.
K.B. I wouldn’t say we shop trends. We typically like things to last longer than a couple seasons, so we buy classics or things that have never been a trend, that would never be a trend. It’s just like its own piece.

Who are your fashion icons?

S.S. I really love Tilda Swinton, I love her whole aesthetic. I don’t know who styles her or if she styles herself but I think it’s out of control, so androgynous and just beautiful, neutral tones. I also love this Russian lady named Miroslava Duma. She’s so ahead of the trends, it’s insane. If you look at pictures of her, the stuff she was wearing in 2007, other style bloggers are just wearing now.
K.B. I would say Solange Knowles is my number one. I love pairing a bunch of bright colours together. I love the structure to her architectural pieces. If she’s wearing all white, there’s something interesting to the piece that’s all white. I really love Jenna Lyons, because I also think she’s business-edgy. I love how she pairs a plain T-shirt with a super glamorous floor-length skirt. And I also actually really love my boss Jeremy Sturgess’ style. He wears super bright suits, multi-coloured shirts, really bright bowties and he’s known within the architectural community and within the city as just being very colourful.

What’s the most common fashion dilemma you face?

K.B. Suzanne wrote this statement on the blog a while ago, asking why, when you go into the kids’ section, are there a million colours of everything, and then you go into the adults’ and it’s grey, black and navy? When did that transition happen that we’re all of a sudden so boring with our wardrobes and our colour?
S.S. When people wear colour, other people enjoy it and comment on it, like, “Oh, you look so springy on this dreary day. That colour looks so great on you and it’s so bright, it makes me happy.” We think colour can have a huge effect on mood and tone, so we always wish there was more.

What do you have the hardest time shopping for?

K.B. I like chic dresses, they’re my most favourite thing, but we’re not very tall. So finding chic dresses that are the appropriate length for our height.
S.S. I would say the hardest thing for me is to find something that’s feminine but not overtly sexual. It’s a fine line. I think designers maybe struggle with that a bit.

What goals do you have when it comes to The Neat Blog’s content going forward?

K.B. I think the message of our blog is to be authentic, to be creative, and in general to help people have the confidence to wear what you want to wear, do what you want to do, and that’s cool. I really want to continue with that message and that trend, which means it’s not sponsored content. We’re only writing about things that we’re passionate about.
S.S. In the beginning, we didn’t really have lofty goals. It was more of a creative outlet and it was something fun to do. And then, as it has evolved, and we’ve been able to collaborate with lots of people and you see all of the opportunities that are available with it, I think our goals have turned into being able to collaborate with people that we love, that we really look up to. Not just in Calgary, but all over the world. 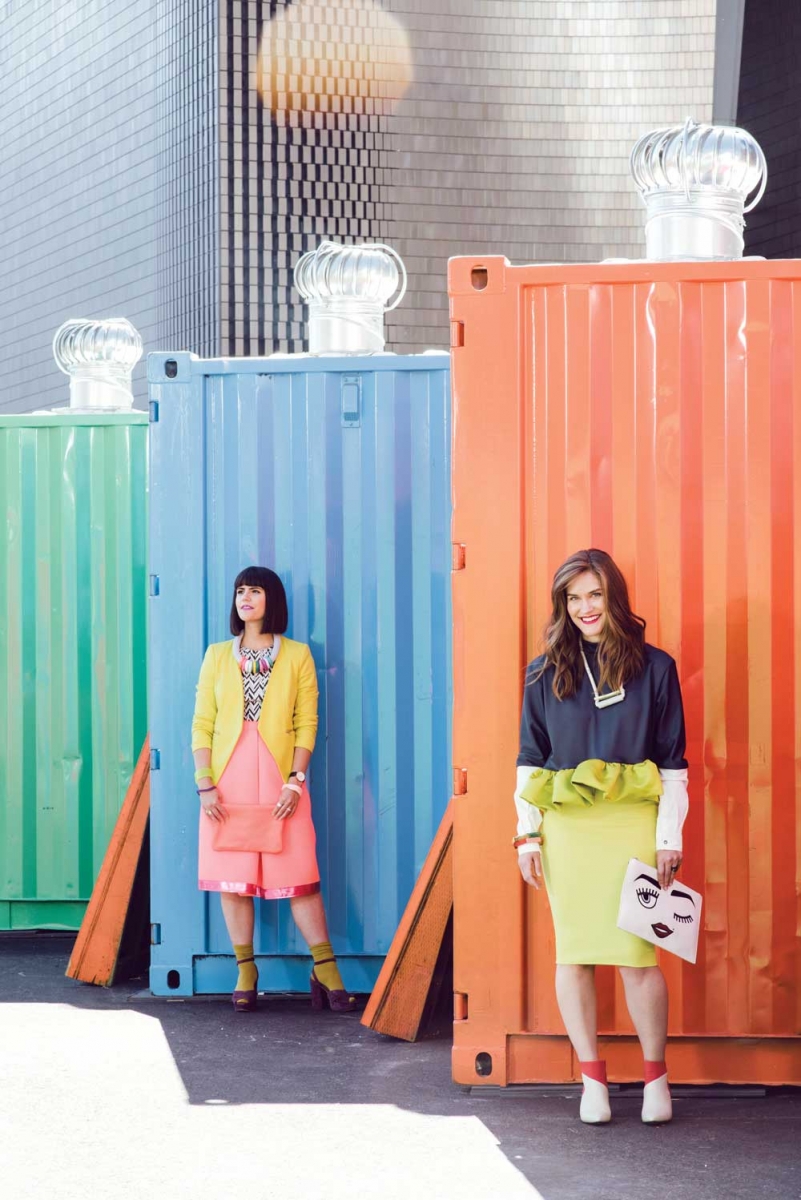 Lightning round with Kayla Browne and Suzanne Stewart

S.S. The Middle Sister boutique in Vancouver. [The owner] brings in lots of designers from Korea that feature bright colours, patterns and silhouettes.
K.B. Workhall in Edmonton, for sure, 100 per cent.

What did you want to be when you were a kid?

K.B. An architect.
S.S. This is going to sound so bad, but I knew I just wanted to work with blood and guts, in some capacity.

What music are you currently listening to?

S.S. We’re listening to our own Neat playlist.
K.B. Our playlists are the best.

Last movie you saw in theatres?

S.S. I love movies. I just saw the weirdest movie. It was called The Lure. It’s about mermaids. It’s a horror-musical, Polish mermaid movie.
K.B. La La Land. I hate going to movies, but I love going to see live theatre.

Favourite website to waste time on?
K.B. We waste a lot of time on ours. Like on the SEO? Oh my god.

S.S. I always really liked Matilda growing up. She had such a hard go of it. The little witch-girl.
K.B. She-Ra and He-Man.

Biggest pet peeve?
S.S. People who stand too close to me in a lineup.
K.B. When people think they’re better than other people.