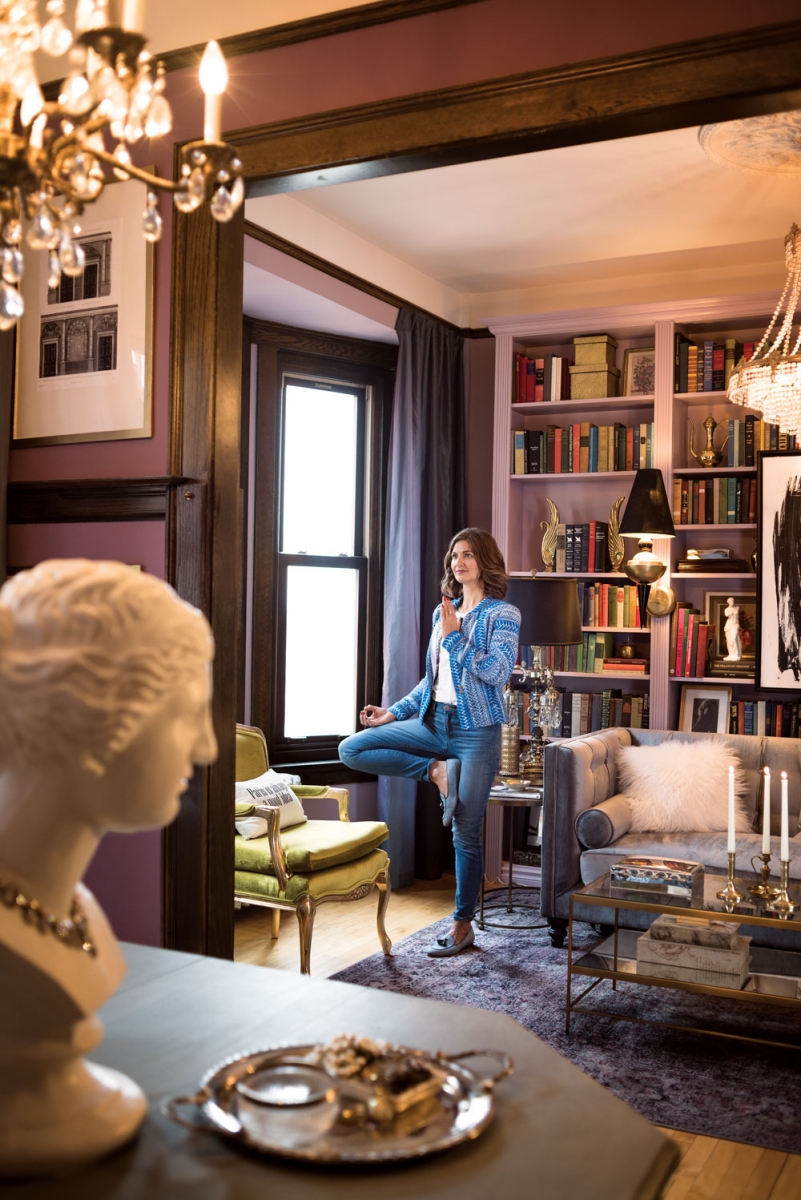 All photography by Jared Sych

Homeowner Kimberly Wiebe sent samples of what she wanted her space to look like to designer Rob Kurkut. To her surprise, he said it was doable in her budget.

When Kimberly Wiebe first rented a corner unit in the iconic Anderson Estates in Lower Mount Royal, she knew she had a winner.

“I walked in … and it just, it felt like home,” says Wiebe, who was in the process of splitting from a long-term partner when she moved into the building in February 2015. “It just felt peaceful; it felt right; it felt calm.”

Six months later, Wiebe purchased the partially furnished heritage condo from her landlord and enlisted the help of Calgary designer Rob Kurkut to turn it into her dream home. “I had always loved those apartments,” Kurkut says. “When I found out that she had bought a place in that building, I was hoping she would hire me.”

Because Anderson Estates (formerly known as the Anderson Apartments) dates back to the early 20th century, Kurkut and Wiebe had to think creatively to create a modern dwelling that didn’t lose sight of its heritage roots. The duo settled on a lavender hue to complement the dark wood trim, and Kurkut encouraged Wiebe to invest in antique light fixtures in keeping with the spirit of the building. “I think we stayed true to the era of the apartment,” says Kurkut, who specializes in visual presentation. “Of course, there were restrictions because of [it being] a heritage building – normally, I would have painted the wood trim – but it is beautiful woodwork.”

Bookshelves painted the same colour as the walls were installed to conceal an awkwardly situated door in the living room, and together Kurkut and Wiebe sourced hardcover books and antiques to suit the space. “This was an opportunity to go crazy with accessories,” says Kurkut, who also tracked down a large bust for Wiebe’s dining room table and adorned it with one of her necklaces. “Wherever you sit, there’s something nice to look at.”

Big style on a small budget

When Kimberly Wiebe purchased her corner unit in the historic Anderson Estates building off 17th Avenue S.W., she knew the space she wanted to create for herself would require stepping out of her comfort zone. “Because we had a limited budget, we had to be creative,” she explains. “I had to do a lot of the work myself.”

Under the guidance of friend and local designer Rob Kurkut, Wiebe – a self-proclaimed “DIY novice” – spent a year painting, building furniture and sourcing the perfect accessories to make her home the peaceful retreat of her dreams. As a yoga instructor and inspirational speaker with her company Strength & Soul, Wiebe often finds herself giving encouragement to others. But, when she began the daunting task of repainting her kitchen cabinets, it was Wiebe who reached out for support.

“I remember having a conversation with a girlfriend and saying, ‘Oh my God, I don’t know how I’m going to do this, there’s so much to tape off,'” she says. “And just sort of reiterating my own advice back to me, she said, ‘Take it one step at a time. Tape off one cabinet and just paint that one.'”

Over the period of a year, Wiebe and Kurkut oversaw a major kitchen renovation, hung floral wallpaper in her cozy bedroom, modified and painted IKEA bookcases to give the illusion of built-in shelving in the living area and sourced a range of designer furniture, Kijiji finds and antiques in keeping with the unit’s rich, century-old heritage.

“Of course, it’s empowering to do a project you couldn’t have imagined doing,” says Wiebe. “Every room makes me smile.”

A time of transition

As a yoga instructor and motivational speaker, Kimberly Wiebe loves to push her students to challenge themselves, but she never imagined she would have to take so many risks of her own when she bought a unit in the historic Anderson Estates in Lower Mount Royal.

Working with Calgary designer Rob Kurkut, she envisioned creating a space that was feminine and stylish, but that also felt like a safe haven as she navigated her way through a relationship breakdown and a significant career change in 2015. “The place has been good for me in so many ways,” Wiebe says.

Kurkut encouraged Wiebe to take on many projects herself because of her limited budget. This meant that, for the first time in her adult life, she spent her evenings staying in, rather than going out. “If there are certain things you can do on your own, there’s a sense of accomplishment,” says Kurkut.

As Wiebe painted and sanded bookcases, enlisted the help of her ex-partner to hang wallpaper, relocated furniture from her previous home and sourced books and antiques to fill her living space, she saw her home, as well as her self-esteem, blossom. “Between going to the gym, going to yoga and working on my place, it’s the best therapy I could have ever had,” she says. “Everything really has a story behind it, related to me. And it empowered me to do projects and things that I never thought I could do.”

Wiebe says the greatest part of her transition is fulfilling her lifetime dream of living in a Parisian-style apartment. “This is the closest I’ve been in 20 years to that vision,” she says. “It’s just fun. I say now, more than I ever have in my whole life, that I love my life.” 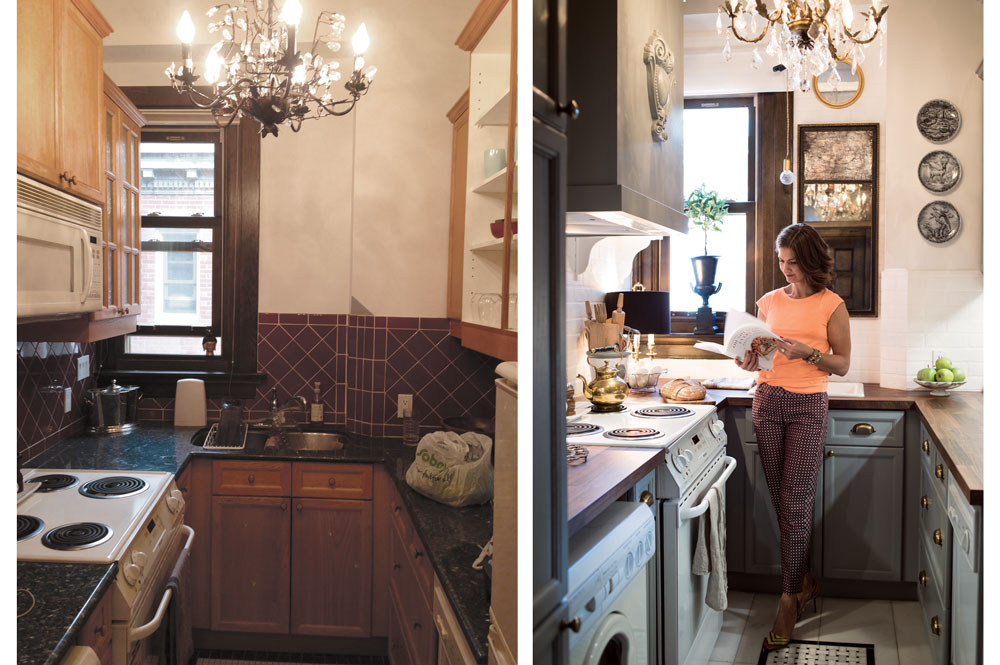 (Left) The kitchen before the renovation. (Right) Between January and May 2016, Wiebe and Kurkut gave the vintage-inspired kitchen a complete overhaul. 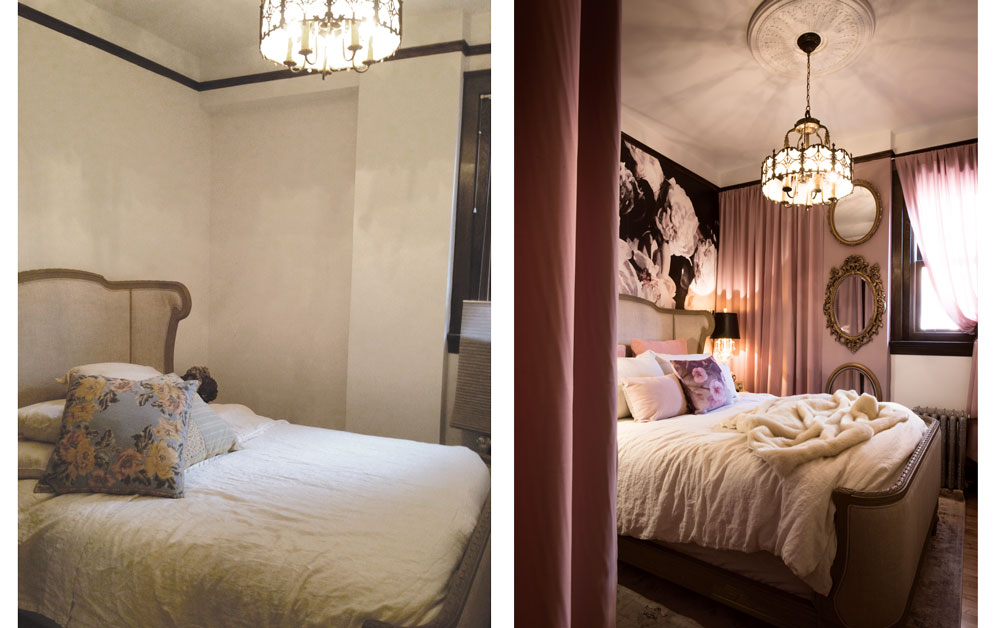 (Left) Wiebe’s bedroom before the renovation. (Right, after renovation) “In here, I feel like I’m in Paris,” says Wiebe of her luxurious bedroom. “Everything is super low-key.” 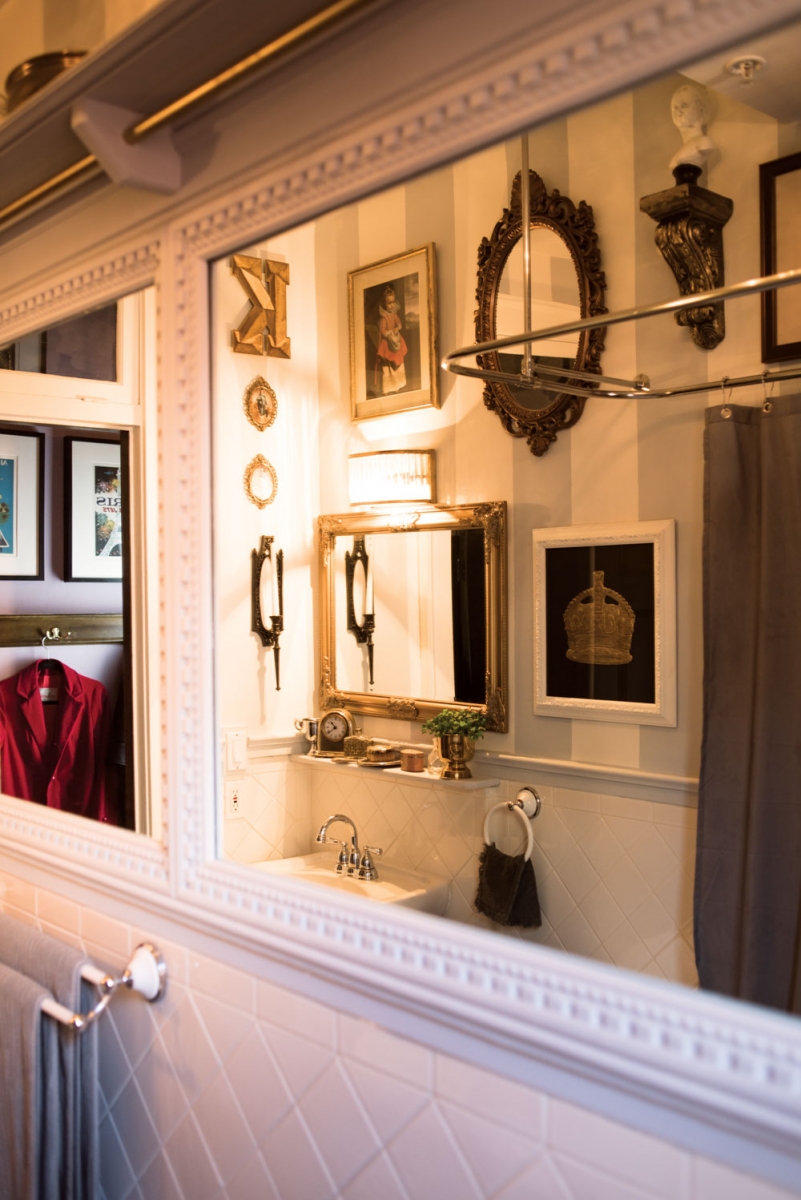 Even the compact bathroom has space for carefully chosen antiques and accessories. 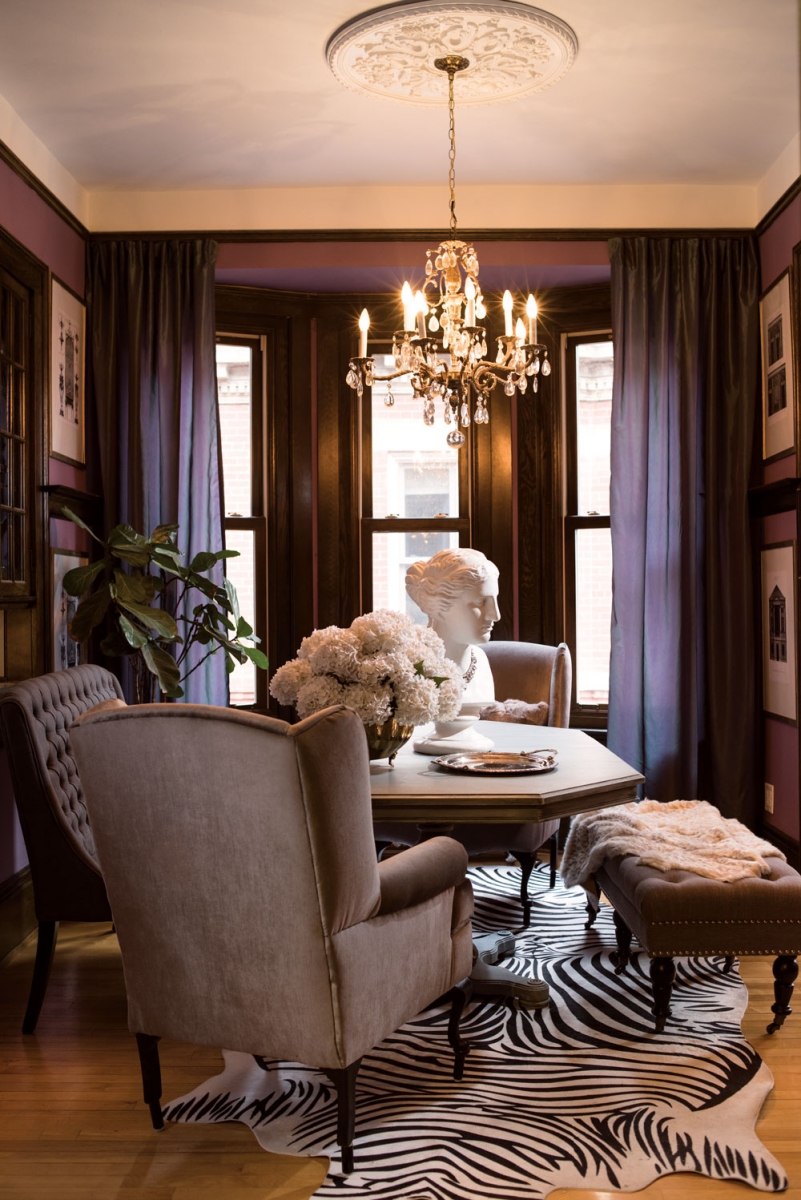 “I wanted to make it really feminine,” says Wiebe of the grey lavender colour she chose for her living and dining areas.

“We didn’t want to run out and buy things for the sake of buying them,” says Kurkut. Instead, he and client Kimberly Wiebe, tracked down a meaningful collection of items over several months that suited the historic character of the apartment.

“You eat at a table; you live on a sofa,” Kurkut explains. “Never put a condo-size sofa in a condo – it can look like dollhouse furniture.” Larger furnishings, particularly in living and dining areas, make a space feel warm and welcoming. “I like to use the biggest sofa that can fit, to anchor the space,” he says.

Kurkut encouraged Wiebe to invest in vintage chandeliers and original artwork in keeping with the apartment’s rich heritage. “I wanted her to spend money on certain things,” he says. Mixing careful investments with DIY projects and inexpensive finds created an eclectic, yet curated look in Wiebe’s heritage apartment.