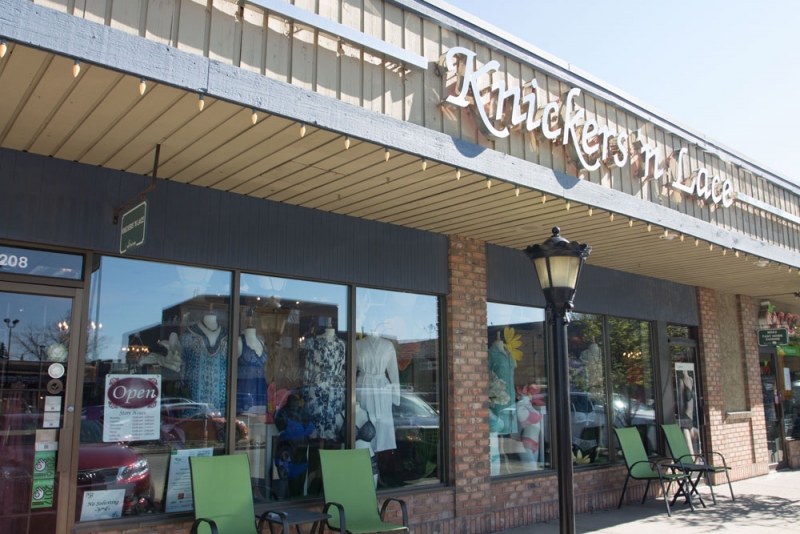 There are particular areas in Calgary that are well-known for the array of local businesses spread out on their avenues, streets, and boulevards. While independent boutiques are more closely associated with areas like Inglewood and Kensington in the inner-city, those who make the trek down Macleod Trail South will find Knickers ‘n Lace, a lingerie boutique owned by Ronna Johnstone, in Willow Park Village.

In 1991, Johnstone decided to take a leap of faith when her job in the oil industry was a casualty of the difficult economic time. Knickers ‘n Lace had been open for under a year, and the owner was looking to sell. Johnstone decided to go for it. “I went and bought something pretty,” laughs Johnstone.

The store was originally housed in Penny Lane Mall, which used to be on 8th Avenue S.W. Two years after Johnstone took over, she decided to take a second leap, this time by moving her store away from the downtown core. The mall was coming under new ownership at the same time her lease was ending, and Johnstone decided to make her own way rather than stay – though to her moving felt like taking a flight to a new province rather than a drive further south. “Willow Park to me at that time was like moving to Winnipeg because it was so far away. I had worked in the inner city forever, but we moved out there and it was the best move that we could have done. We started off as an 800-square-foot store, and have since doubled our size. The rest is history,” says Johnstone.

There’s a reason why Knickers ‘n Lace has thrived for 27 years – the store is known for its fittings and range of sizes. Johnstone’s memorable moments over the course of the store’s history include the expansion of the space and various awards and nominations. But to her, what is memorable is the collective rather than the singular. “When a woman walks into your store and they’re very shy, and their shoulders are hunched and they’re not wearing the proper undergarment and they leave with their head is held high and their shoulders back, it’s like you’ve released a positive energy into the universe,” says Johnstone. “That woman has changed and she’s walking out more confident, more empowered, and more assured of herself. Those moments happen a lot in Knickers ‘n Lace. That’s what gives all of us great joy.”

Johnstone’s top three essential pieces of lingerie that she would recommend a woman own are an everyday bra, a strapless bra, and a sports bra. She emphasizes the importance of taking care of your lingerie as well – no more throwing it into the washing machine and hoping for the best. “It’s an investment as far as I’m concerned,” says Johnstone. “It will last you a long time if you look after it.”

When it comes to fit, Johnstone emphasizes the importance of a bra fitting. “I think people should always get a proper bra fitting, once in their life,” says Johnstone. “At the end of the day, [people who come in for a bra fitting] can go anywhere in the world and buy a bra that fits them properly with what we’ve taught them throughout their fitting.”