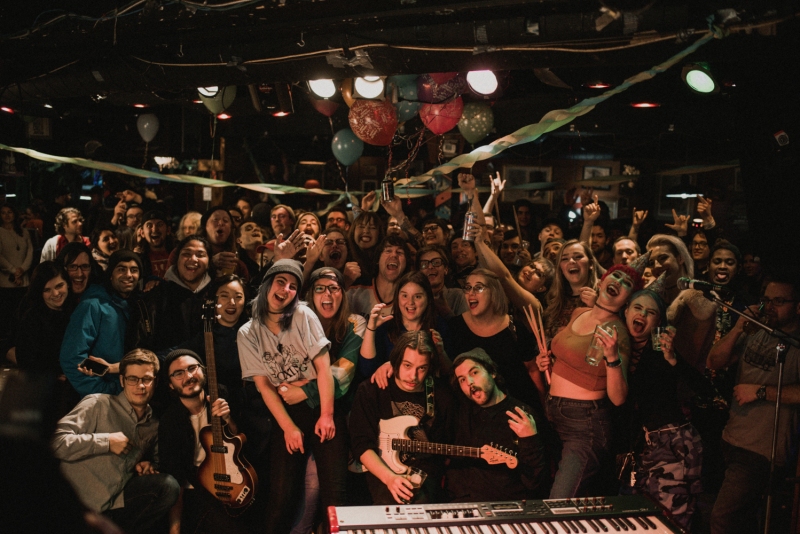 Photograph by Adam and Alexandra Photography

On Wednesday evenings, BJ Downey transforms into BJ Killer – the host of Rockin’ 4 Dollar$. This rock n’ roll event combines cash, beer, hockey, and – wait for it – warmth and support. Downey is the force behind the Calgary edition, asking founder Craig Hamlin if he could transport the idea from Halifax. Downey remembered how the event was always “a legendary night” in the city when he lived there. Three years later, and Downey is working his way towards making Calgary’s version hit legendary status as well.

With no rules as to who can or cannot perform, Downey has seen a range of acts at the event, which he thinks is really the beauty of the whole thing. “We have everything from bands that have played their very first show at Rockin’ 4 Dollar$, to bands that are signed to labels, from all over North America. It’s an insane idea and I don’t know how it makes sense sometimes, but it does [and] it’s really awesome,” says Downey.

Here are five things you should know about Rockin’ 4 Dollar$.

A few… okay, maybe more than a few, punches earned Downey the nickname BJ Killer, which became his host name for Rockin’ 4 Dollar$. “Well, I used to play hockey. I was one of the rough players, not like the goal scorers, but the guy that would drop his gloves a lot. BJ Killer kind of just fell on my lap from that. I started a band called the Hockey Fight, which is all songs about really funny goon hockey stuff. I just kept the name for that, and that’s kind of the persona that I take when I’m hosting. I put on like fake blood and make a black eye, and I wear my dad’s old hockey jersey,” says Downey.

What separates Rockin’ 4 Dollar$ from the rest of the Calgary music scene is the atmosphere and a tradition borrowed from hockey.

For Downey, what makes Rockin’ 4 Dollar$ so unique in the Calgary music scene isn’t the format or the prizes at the end, it’s the warm and welcoming atmosphere that is encapsulated in a tradition borrowed from hockey. “After every band plays, we do a thing called the hockey line-up. The band comes off stage, everybody in the whole room [is] in [a] single file line, and we shake hands and we say things like: ‘That was awesome. Great guitar solo. I love that song. Good game.’ It’s just such a positive thing. It’s a wonderful open space to create music and create friendships,” says Downey.

There are other highly sought after prizes on the wheel.

There are many prizes on the wheel apart from cold, hard cash. You could spin to win a mustache drawn on you or to have to take a shot of hot sauce. “It’s just wacky. It’s crazy and fun,” says Downey.

Downey considers the real perk of hosting Rockin’ 4 Dollar$ to be witnessing the growth of bands that got their start at this welcoming night. “It’s going to sound like I’m being mushy but the biggest reward is we’ve seen bands literally play their first show and go on to be bands that are touring,” says Downey, who sometimes feels like a proud parent to the bands.

[Correction: A previous version of this article had an incorrect photo credit. It has been updated to properly credit Adam and Alexandra Photography.]