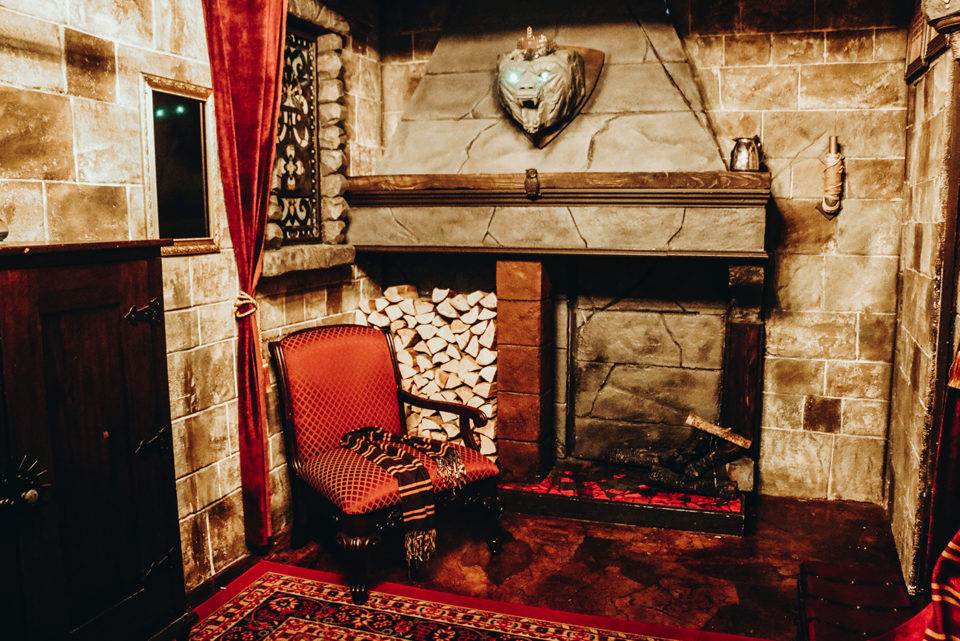 The concept of escape rooms is that a group of people enter a locked room and must solve a series of puzzles in under an hour in order to exit the room. There are several businesses that offer this experience in Calgary. We give you the details on 12 of them.

Just across from Chinook Centre, you’ll find the perfect spot for mischief and mystery that will keep you entertained for an afternoon or evening of fun. This family-owned business prides itself on the attention to detail in each room, making them a challenge to solve. Each room has less than a 50 per cent success rate, so make sure to keep your wits about you.
Number of rooms: Three.
These include: Escape from a dungeon that has magical properties holding you inside, steal a priceless artifact from a Victorian museum and find a cure to stop the Zombie apocalypse before the military takes drastic action, or worse, you get eaten.
Accommodates: Between four to 10 people, larger groups on request.
Cost: $24.99 per player (kids 12 and under are $16.99 per player).
6012 3 St. S.W., 587-356-0440, arcadiaescaperoom.ca

Confined differs itself from the crowd by offering live-action escape rooms that are professionally designed to have unique visual elements and game-play (like players having to wear 3D glasses in an Alice in Wonderland themed room). Get ready to experience everything from fog to strobe lighting in these unpredictable game-plays that will take you down the rabbit hole and up to Trump Tower.
Number of rooms: Four
These include: Escape the whimsical and maddening world down the rabbit hole, reunite with lost comrades at this spooky and hidden cabin in the woods, breakout of Trump Towers before alerting anyone of your presence and use the doctor’s secret technologies to bring your own creations to life.
Accommodates: Between three to eight people, larger groups on request.
Cost: $25 to $35 per player.
2020 32 Ave. N.E., 403-452-4441, confined.ca

Puzzles here fit into room themes very well and the scale of difficulty between the puzzles range from deceptively simple to mind-wreckingly complex, which can lead escapees to both under and over think them. This means it’s best to get people working on a few different problems at a time, as it is easy to get bottlenecked on the harder puzzles.
Number of rooms: Four
Themes include: Orchestrate a jailbreak, escape from an abandoned psychiatric hospital, rescue backpackers from a mysterious red cabin or escape a space-time split to successfully return to our universe.
Accommodates: Between two and 10 people.
Cost: $23.81 per player.
Unit C6, 416 Meridian Rd S.E., 403-207-5777, escape2gether.ca

The brothers behind Escape60 decided from the get-go that they wanted to offer escape rooms that were anything but ordinary through using craftsmanship and modern technology that simulates authentic sensory experiences. It’s the only escape room company that offers, not one, but two Harry Potter-themed escape rooms as well as a wet bar that features cocktails and themed drinks (think butterbeer from the Harry Potter franchise).
Number of rooms: Six
Themes include: Outsmart a skilled hunter on a deserted island after being shipwrecked, find evidence in one of Pablo Escobar’s safe houses to reveal his illegal occupation in your next exposé, defeat the dark lord as you search for hidden horcruxes after sneaking back into Hogwarts and solve clues left by your professor to find the Triwizard Cup and save the tournament.
Accommodates: Between four and 12 people, larger corporate groups on request.
Cost: $29 to $35 per player.
1638 10 Ave. S.W., 587-430-0880, escape60.ca

Escape Capers is as polished an experience as you could want and prides itself on providing one of the only hosted escape rooms in town. Hosted rooms mean there is an actor, in character, in the room with you who will give (a limited number of) hints if you get stuck. If your group is stumped, keep an eye on what the person does or says, and it could keep you from treading water. Each year it sets up theatrical escape events for a limited time at certain locations across the city, but you’ll have to act fast because they sell out quickly.
Number of rooms: One
Themes include: Infiltrate the Quizzler’s secret lair to retrieve the missing M.E.G.A. bomb before it blows up.
Accommodates: Between four and eight people, larger corporate groups on request.
Cost: $28 per player.
4235 16 St. S.E., 403-903-9162, escapecapers.ca

At Escape Hour, each private group is assigned its own GameMaster to assist with solving clues and to receive hints during the session. Although, if at any point participants no longer wish to receive clues or hints they can easily let the GameMaster know. But from then on, it will be radio silence. Escape Hour will also have the option for VR escape rooms in the near future, delighting video game enthusiasts and traditional escape room artists alike.
Number of rooms: Four
Themes include: Find the lost jewel of Zanzibar before the warlord does, uncover the evidence you need in the Lucky Duck Speakeasy to identify a kingpin before a bomb explodes, escape from a genie’s lamp by breaking the curse and retrieve a space probe in order to close a wormhole and save humanity.
Accommodates: Between two and 10 people, larger corporate groups on request.
Cost: $24.99 per player.
200, 3016 19 St. N.E., 403-975-8999, escapehour.ca

This company follows in the footsteps of some of the more popular escape rooms in Asia with a focus on interesting equipment. Laser fields, sliding walls and embedded screens are just some of the high-tech obstacles you’ll encounter here and Esxoss Manway’s proximity to CF Chinook Centre means you won’t be looking too hard for things to do post-breakout.
Number of rooms: Three
Themes include: Break into the office of a Nazi general to steal important documents, uncover the mystery behind the disappearance of an asylum’s chief physician or take a page from Inception and plant memories in the mind of a man in order to solve a murder.
Accommodates: Between four and 10 people, larger corporate groups in advance.
Cost: $25 per player, discounts for groups with more than 10 players
209, 5720 Macleod Trail S.W., 403-475-2599, esxossmanway.ca

If you’re new to escape rooms, you can get a taste with one of Exit’s weekly deals that will have you coming back for more in no time. On Monday, students can receive 30 per cent off with a valid student ID, Thursdays feature “Ladies Night” where you and the gals can each receive 20 per cent off and families can get 40 per cent off kids who are 10 years old and under any time.
Number of rooms: Five
Themes include: Find out why your friend abruptly left while clubbing in downtown Tokyo, escape from a hidden room in an ancient Egyptian pyramid after your tour goes awry, steer your ship away from the impending Kraken attack or find the hidden treasure aboard, meet a scalper for some Flames tickets only to be put into imminent danger that you must get out of and start-up an abandoned spaceship on a foreign planet after yours has been shot down to escape the wrath of a predator.
Accommodates: Between two and eight people.
Cost: $25 per player.
60, 880 16 Ave. S.W., 403-475-3948, e-exit.ca

Level 1 Escape benefits from a wide range of rooms offering a variety of challenges to suit anyone’s skill level. Expect to find linear puzzle elements, simple, single room escapes and more elaborate, multi room experiences — though you won’t know which room is which until you are locked inside.
Number of rooms: Seven
Themes include: Escape from a Fallout-inspired vault room, examine one of two haunted apartments, investigate a murder scene, become a test subject locked in a cell, retrieve a formula to counter a bioterrorism threat or unlock the secrets of an ancient Egyptian tomb.
Accommodates: Between two and eight people.
Cost: $24.95 to $29.95 per player.
517 16 Ave. N.E., 403-879-4617, level1escape.com

This company — the first one to open in the city — has been refining its rooms since opening five years ago. Breakdowns of the puzzles can be found on its site, giving a synopsis of each escape room allowing the number-averse to pick a room with more wordplay or math geeks to really put their skills to the test.
Number of rooms: 13 in total, but varies by location.
Themes include: In the Southeast: Sneak into the Forbidden Temple and escape out of a secret tunnel in the the throne room to evade an angry mob, attend a party at a mansion to steal $50,000,000 of gold bullion from a high-tech safe, escape from prison after being thrown in for a crime you didn’t commit and find a way out of a blood-stained cage before something horrible happens.
In the Northeast: Rescue a video game princess, sneak into the Quizzler’s secret lair to retrieve the missing M.E.G.A. bomb before it blows up, evade pirate justice, infiltrate an abandoned Area 51-inspired industrial hanger and break into Merlin’s lair and pull the sword out of the stone before they come back.
In Southland: Break into a research lab in Antarctica to retrieve a DNA-altering crystal before the ice shelf collapses, retrieve the Golden Apple from the Minotaur while he sleeps, steal gold from a moving train and bust some ghosts and ghouls at the Bassett Family Mansion before you become one.
Accommodates: Between two and 10 people.
Cost: $27.95 to $34.95 per player.
15, 2015 32 Ave. N.E., 403-455-0545; 9937 Fairmount Dr. S.E., 403-454-4496; 191, 5330 72 Ave. S.E., 403-271-9645, thelockedroom.ca

There are a plethora of escape rooms and adventures to choose from at SmartyPantz to satisfy the thrill seeker in everyone. SmartyPantz also offers two virtual reality (VR) adventures that are 10 minutes long and take you from battling robots on a distant planet to exploring an abandoned hospital where there’s something lurking behind every corner.
Number of rooms: Six with three physical escape rooms and three VR escape rooms.
Themes include: Escape prison after being accused for a crime you didn’t commit, reactivate a station’s weapons to destroy a deadly asteroid heading towards Earth, find a way to get out of a psychotic and cannibalistic killer’s basement before you fall victim to their hunger, retrieve artifacts from an underwater temple before running out of oxygen, discover the identity of a Nazi war criminal so that he can be brought to justice and break a paranormal curse that haunts an abandoned house before you become the next victim.
Accommodates: Between two and eight people, larger corporate groups in advance.
Cost: $25 for traditional escape rooms and $30 for VR escape rooms per player.
1601 14 St. S.W., 587-318-5640, calgary.smartypantz.ca

At Trapped, you get a curated experience that begins as soon as you step into their lobby. Participants in each escape room are viewed as essential characters in the story arc to make the aspects of mystery and adventure seem as immersive as possible.
Number of rooms: Five.
Themes include: Overcome the pharaoh’s curse to escape from the pyramid alive, infiltrate Light Yagami’s room to discover why criminals around the world are mysteriously dying from heart attacks, escape from an abandoned hospital on a deserted island through discovering the truth, find your life’s purpose through a sci-fi adventure and figure out who Jack the Ripper is after being sent back in time as a homicide detective.
Accommodates: Between two and 10 people, larger corporate groups up to 15 people in advance.
Cost: $28 per player.
1139 Kensington Rd. N.W., 587-356-4488, trapped.ca