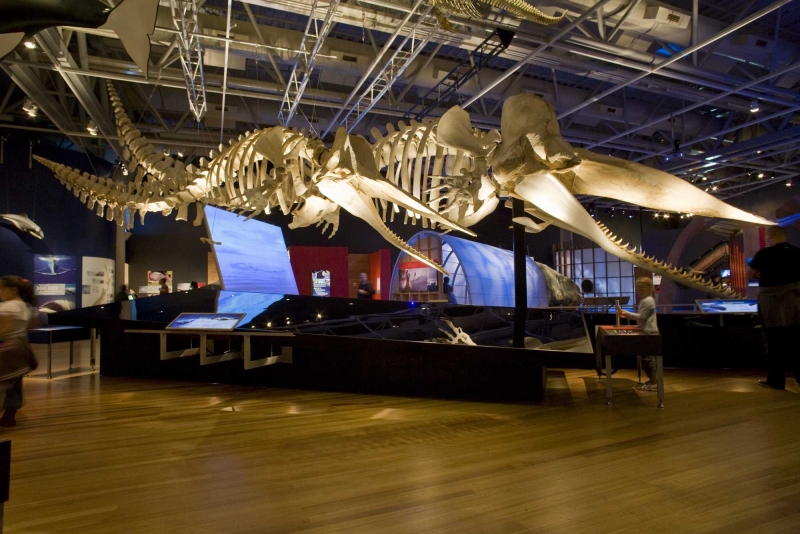 Whales | Tohor is a travelling exhibit created by the Museum of New Zealand Te Papa Tongarewa. Calgary is the final place it will be exhibited in Canada. Hosted by Telus Spark, this exhibit is filled with displays that highlight both the science and the culture surrounding whales. You don’t want to miss out on the perfect orca-tunity to learn about these beautiful and intelligent sea creatures – and maybe make a whale pun or two… #sorrynotsorry. Taylor MacLeod, a facilitator at Telus Spark, shares five things you should know about Whales|Tohor.

There are five full whale skeletons on display.

Whales | Tohor has five whale skeletons for visitors to see, and amazingly, each skeleton is real. “We’ve got a hector’s dolphin, a gray’s beaked whale, a pygmy right whale, and then two sperm whales. [The skeletons] all come from stranded whales, so they’ve all come from whales that have beached at some point,” says MacLeod. “The largest skeleton that we have on display is our male sperm whale. His name is T Hononga, he’s 17.9 metres long or 58 feet.”

Visitors can also see real skulls in the exhibit.

MacLeod reveals that the part of Whales | Tohor that interests her the most includes a whale that – to put it mildly – you definitely wouldn’t see on your average whale watching expedition. “My favourite part of the exhibit is a case that has approximately 12 skulls in it. These skulls are from a very rare type of whale called beaked whales. This case contains our only cast in the exhibit, which is of the spade toothed whale, and that’s because only one specimen of the spade toothed whale exists in the world. The skull is actually too valuable to travel with the exhibit,” says MacLeod.

What do a blue whale heart and a Smart car have in common? Their size.

MacLeod thinks visitors will be surprised by the monumental nature of the creatures on display. “I think [the most surprising part of the exhibit is] the scale. You walk into the exhibit and you’re confronted with that huge sperm whale skeleton. We’ve also got the blue whale heart. The blue whale heart is approximately the size of a Smart car. That’s to scale,” says MacLeod. “[The blue whale is] the largest whale in the world.”

Here’s a tip for visitors: if you’re interested in gaining a visual understanding of exactly how much larger a blue whale heart is than our own, ask to see the sheep’s heart. “We have a sheep’s heart as well for comparison that we can bring out to show visitors, and it’s around the size of a human heart,” says MacLeod. “If a visitor really wants to see it, they’re more than welcome to ask a volunteer or a facilitator.”

Inform your dentists – teeth aren’t always the top of the evolutionary scale (at least for whales).

MacLeod finds that one of visitors’ biggest misconceptions when they come to the exhibit is about the evolution of whales and where teeth fall on the evolutionary scale. “Most people perceive baleen as a trait that precedes teeth, baleen being the brush teeth that certain whales will use to feed. That’s actually a derived characteristic, so that’s more recent evolution in the history of whales than the toothed forms like dolphins and sperm whales,” says MacLeod. “A lot of humans tend to think that we’re the most advanced species on earth and so there can’t be anything better than teeth but for some of the whales’ diets, baleen is actually better and it evolved more recently in the history of whales than teeth did.”

If whale songs are your thing, you can listen to a number of different whales at Whales | Tohor.

At the exhibit, visitors will be able to hear a wide variety of whales. However, if visitors tried to listen to the blue whale, they wouldn’t hear anything. Thankfully, the exhibit has a solution. “The blue whale sounds are actually too low for humans to really hear, and so we’ve actually had to speed up the blue whale calls just a tiny bit so that we can hear them,” says MacLeod.

Whales | Tohor is on at Telus Spark until June 20, 2018. For more information, visit sparkscience.ca.