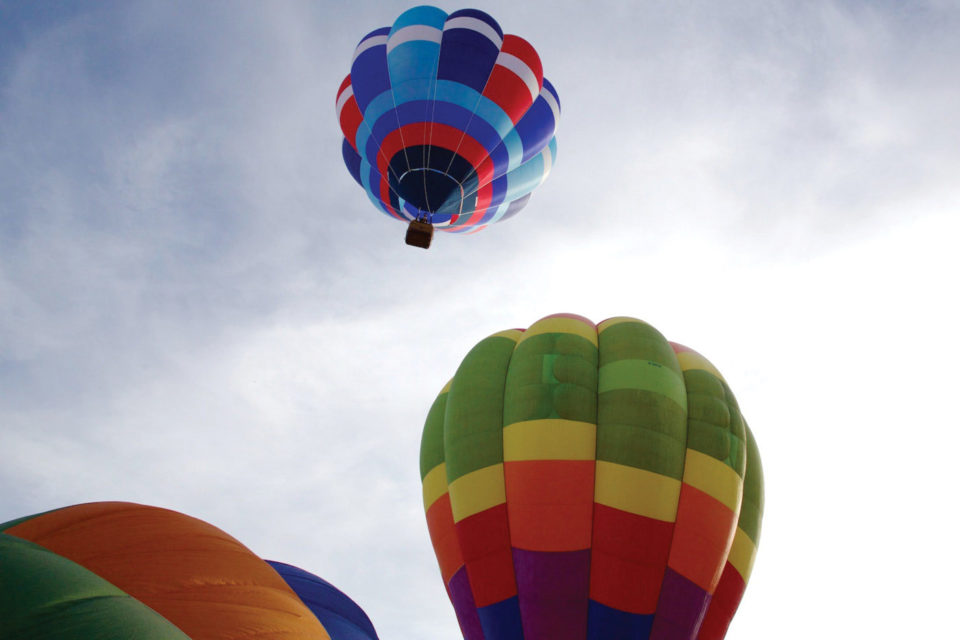 After the 2013 floods devastated High River, hot-air balloonist Jamie Kinghorn asked a few of his fellow balloon enthusiasts to participate in a small event to lift people’s spirits. Since then, the Heritage Inn International Balloon Festival, which Kinghorn chairs, has grown from a local affair to an event that draws balloonists from as far away as Europe and the United Kingdom, and has attracted crowds of more than 30,000.

One of the highlights of the festival is the hare and hound race. In this event, the “hare” pilot takes off with a 10-minute head start, navigating different winds and altitudes across town before landing and putting out a large X on the ground. The “hound” balloons must chase after the hare and drop a beanbag from their balloons to try to hit the target. Whoever gets their beanbag closest to the centre of the X, without their balloon touching the treetops or the ground, wins.

“As a hare pilot, I’ll try to fly into winds that will take me the furthest away from the other balloons and I’ll do different steering  tactics to make it challenging,” says Kinghorn. “[Hound pilots] will have to fly almost  exactly the same current winds to get them selves right over top of my target. In a world- class competition you’ll see 60 or 70 of those  beanbags all within six inches of the centre of the X. It’s a real art.”

Kinghorn has seen pilots toss beanbags from 3,000 feet in the air and has watched as high winds carried one-pound bags right  next to the target from more than 500 metres  away. He has even seen the occasional glove or shoe tossed by unfortunate competitors who forgot their beanbags on the ground.

In addition to the hare and hound race, festival attendees can walk among the grounded balloons, observe spectacular “night glow” flights, purchase rides and check out High River’s Show ’n Shine car show happening in town at the same time.

This article appears in the September 2019 issue of Avenue Calgary.