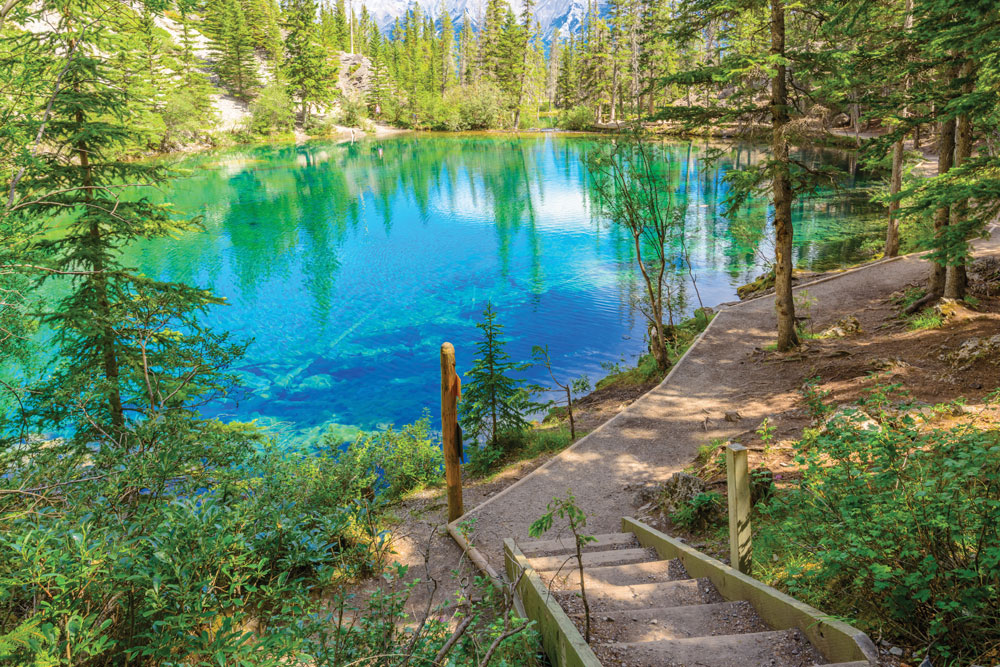 Grassi Lakes Trail must be one of the most-walked and best-known trails in the Bow Valley. For good reason – it’s a short (just over four-kilometre), kid-friendly trail that starts conveniently close to Canmore’s town centre, yet it still offers hikers a compact experience of Rocky Mountain beauty with its loop around two azure lakes, its woods and wildflowers.

There are historical vestiges, too: some log cabin bits remain, and, with a bit of a scramble at the end, you can even get to 1,000-year-old pictographs. So you know people have been walking here for a long, long time.

The route hikers follow today has a trajectory that connects to the path that brought namesake Lorenzo Grassi from a small Italian town near Lago Maggiore to the north shore of Lake Superior, and finally to Canmore. When asked why he left his home in Falmenta in 1912 at age 22, Grassi reportedly explained, “I needed to get something to eat.”

There was also the issue of compulsory military service – he took an indefinite leave that continued until his death in Canmore in 1980. In any case, Grassi settled here as a coal miner, never returning to the Italian mountain village from whence he came, and became the Lawrence Grassi whose name is everywhere in Canmore – not just the lakes, but a school and Mount Lawrence Grassi celebrate the affection he earned in the Bow Valley.

Reading list: Tommy and Lawrence: The Ways and Trails of Lake O’Hara by John Whyte and Lawrence Grassi: From Piedmont to the Rocky Mountains by Elio Costa and Gabriele Scardellato.

What made this diminutive Italian man in suspenders and mining boots such an admired and beloved figure? Above all, it’s his trails. But there was also his generosity. When he worked as a mountain guide (though never certified), he declined payment. Then there are tales of his legendary strength.

In 1926, he carried an injured Calgary doctor for two miles across a glacier to meet a rescue party (the doctor weighed more than Grassi did). And, of course, his own climbing was highly accomplished. His solo ascent of Mount Assiniboine was only one of many significant first-time summits in the area. (Castle Mountain’s Eisenhower Tower, Canmore’s First Sister and others fill out the list.)

But it is the trails he built that form his true legacy, one enjoyed by thousands every year, but especially the trails he built or improved around Lake O’Hara, with paths to Lake Oesa and Lake McArthur. Their design, the views they provide and their painstaking, often back-breaking construction, remain a marvel. As John Whyte (nephew of the founders of Banff’s Whyte Museum of the Canadian Rockies) wrote: “The greatest honour that could be paid to the man would be for the trail designers and builders of the paths of the Rockies to look at the manner in which he built his paths, and then go forth and do likewise … The Rockies shall not easily wear away what he built.” -H.V.

Go with a guide

In addition to making sure you don’t get lost, a guide can educate you on the history and legend of the area where you are hiking. The Mountain Heritage Program at the Fairmont Chateau Lake Louise offers guiding services for all manner of hikes and outings, continuing a tradition the hotel began in 1899 when it brought in professional Swiss guides to keep guests safe on their alpine expeditions. -Shelley Arnusch