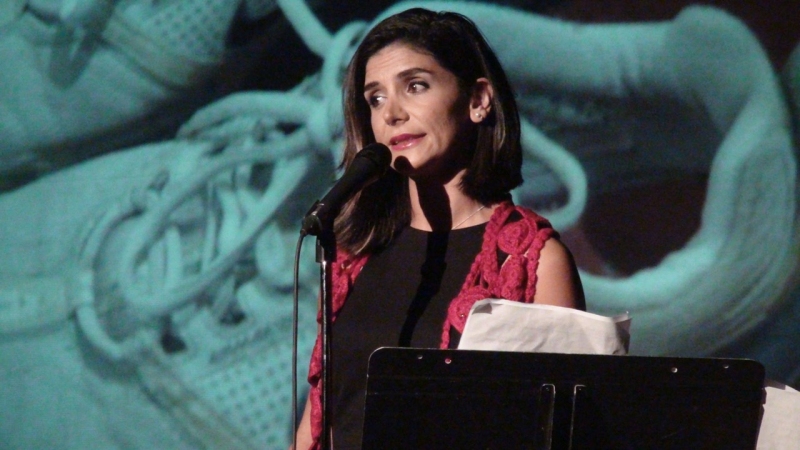 Rasha El-endari from Syria talking about her 'Shoes for the Revolution' at the Arts and Letters Club in Toronto. Photograph courtesy of The Shoe Project.

The Shoe Project is a workshop in which the participants are all women who have immigrated to Canada. The series focuses on writing and performance skills and culminates in a final performance in which the women share the stories they have carefully crafted over the course of the project.

The shoe part of it? Well, according to Katherine Govier, creator of The Shoe Project, that was just a happy accident. “The shoes were just a gift. We were looking for a place to meet and the Bata Shoe Museum offered us space,” says Govier. “They said we could meet there for one session as long as we wrote about shoes. So that’s what we did. It turned out it was just such a great idea. The shoe is a perfect metaphor for the kind of travel and transformation that these women have experienced.”

On Sunday, January 21, The Shoe Project will be at Studio Bell as part of the High Performance Rodeo.

Calgary writer Barb Howard acted as the writing mentor for the most recent Shoe Project workshop in Calgary. When asked what she hopes audiences will take away from the performance, Howard said, “I hope audiences take away what I got out of it, which is just holy smokes! These women are amazing.

“In terms of people who read a lot or write, when they hear the stories they can appreciate how hard it is to put what they’re trying to say in 600 words,” says Howard. “The shoes narrow the story down, and that’s what makes it great, but, obviously, it’s not really about the shoes. It’s about them having a chance to stand up and speak their peace.”

Noriko Ohsada will be one of the women sharing her story. It will be her fourth time participating. Ohsada, a Japanese immigrant who has lived in Canada for more 25 years, became involved with the project when her English tutor introduced her to Govier three years ago.

“I started to think about my personal history related to shoes,” says Ohsada. “I thought it could be only one story, but then I realized I have more stories I want to tell to keep a record.”

For Ohsada, what kept her coming back to The Shoe Project (this will be her final performance with the workshop, as participants are allowed to take it a maximum of four times), is the connection – both with herself and with her fellow participants.

Ohsada describes writing her first story as an experience that was initially difficult, but ultimately important. “With support from Katherine and other participants, I was able to rediscover what I was thinking,” she says. “That was a very healthy process for me. That was hard, but now I’m okay, so it’s probably worth telling or writing about it. That was a part of me and a part of my history.”

When Ohsada and the other Shoe Project performers take the stage on Sunday, the audience can expect to hear stories that begin with a pair of shoes and takes them on a journey.

Here is a sneak peek of the story Noriko Ohsada will be performing on Sunday night:

“I opened my shoe closet hoping to find a pair of interesting shoes for my fourth Shoe Project.  My eyes caught a familiar, but long-forgotten box. I lifted the lid, tenderly unwrapped the tissue paper, and saw my ivory dress shoes, the ones with ‘the most graceful ladies’ inscribed in English on the insole. They were the only shoes that traveled with me from Japan. I gazed at the heels, but I didn’t try them on. There was a distance between the shoes and me. They were revealing my sensitive past that I was afraid to confront. What if they didn’t fit me anymore?”

The Shoe Project is on January 21, 2018. For more information and to purchase tickets, visit hprodeo.ca.