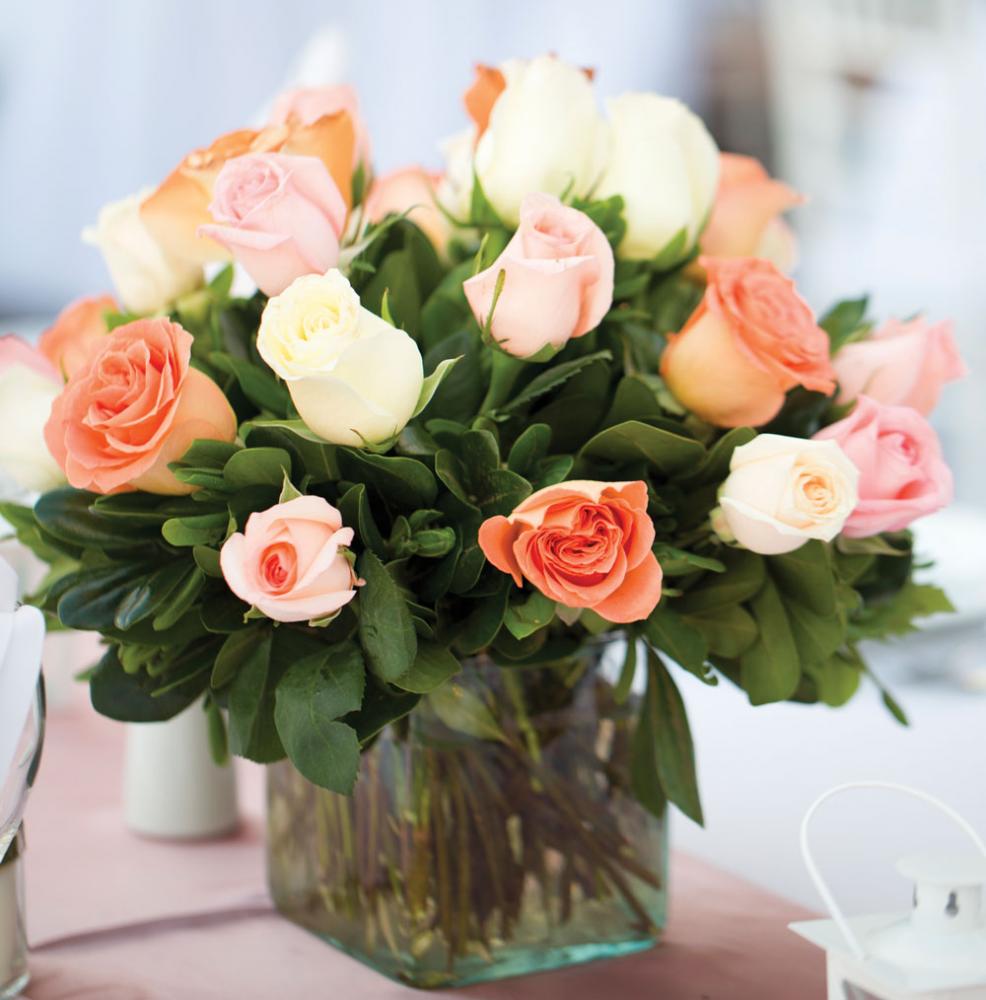 In December 2011, Tyler Groves bent down on one knee at the Fairmont Banff Springs Hotel to ask Chantille, the love of his life, to marry him. For her, there was no hesitation: she immediately said yes, and they began planning their dream wedding that day.

They were both living in Medicine Hat, near Tyler’s family, but Chantille grew up in Newfoundland, which was well over 5,000 kilometres away. This left the newly engaged couple with a difficult decision to make – where should they get married? If they got married in one of their hometowns, the other side of the family would be saddled with a lengthy trip.

It didn’t take them long to decide that they would venture south and take both sides of the family on a destination wedding in Mexico, a choice an increasing number of couples are making.

Why Destination Weddings Are Popular

According to the annual wedding survey at theknot.com, the world’s top-visited wedding-planning website, destination weddings have been growing more popular over the past few years. In 2012, 24 per cent of all weddings in America happened abroad, jumping 20 per cent since 2008, and trends in Canada are heading in the same direction.

In the past, it wasn’t rare to hear a distinct scoff in people’s voices as they spoke about destination weddings, dismissing them as a cheap way to have both a wedding and a honeymoon in one go, as a way to alienate guests or even, depending on the destination, as something reserved only for the wealthy. Laughing, Chantille admits she used to think destination weddings were just a cheap way to elope. But, in her case, as air travel was likely inevitable for many guests anyway, taking the opportunity to visit an exotic country didn’t seem like such a bad idea.

“Initially, my traditional, Catholic grandparents in Newfoundland were pretty surprised,” says Chantille. “But most people were excited. Honestly, Newfoundland is not a cheap trip. When I go home every year, my flight alone is almost the cost of an all-inclusive trip. Plus, accommodation in St. John’s is extremely expensive, and taxes there are 14 per cent. So, really, I think a destination wedding was cost-effective for everyone.”

For some couples (those who may like to keep a keen finger on the pulse of their ceremony), planning a destination wedding at a resort can be intimidating, due to the structure and defined packages. But Chantille was one bride who had a clear vision for the wedding, and she was adamant about making it happen at a resort.

Chantille didn’t compromise on what she wanted and opted to have a chandelier at her beach ceremony. Photo courtesy of NC Photography.

Knowing she would step outside the bounds of most wedding packages, she chose the Now Sapphire resort in the Mayan Riviera because it offered plenty of options that could give her the extravagant, elegant wedding she was dreaming of. She added extra guests, exchanged the standard chairs for new white bamboo tiffany chairs, the round tables for rectangular, added custom-made, blush-coloured linens and draped the scene in chandeliers. She even added a chandelier to the gazebo on the beach where the couple said their vows.

Bring Your Own Photographer

Instead of hiring a photographer locally or using the photographer at the resort, Chantille and Tyler opted to bring their own wedding photographer with them, Calgary-based Nicole Modde of NC Photography. Modde says most photographers only do one or two destination weddings a year, so it’s best to book them as soon as the venue is set.

After spending the entire week with the couple and documenting their celebration, Modde recalls Chantille knew exactly what she wanted, and made her perfect wedding happen on a beach.

“A lot of people who go on destination weddings think that they can’t have the special details,” says Modde, “but Chantille’s wedding is a perfect way to show that a wedding at a resort can be just as beautiful as if it was local. I mean, she didn’t even compromise on having a chandelier at her ceremony.”

Spend Quality Time With Your Guests

The sandy beaches and turquoise seas are reason enough to renew your passport and jump on a plane to celebrate your nuptials, but it has the added bonus of giving the bride and groom’s guests a chance to actually spend some time together.

Chantille says everyone at her reception was so connected after spending the week getting to know each other, it made the actual celebration that much more emotional for her. “It wasn’t just a bunch of random people in a hall, clapping and laughing, even though they don’t know the inside jokes,” she says. “It was real for us and it was real for everybody.”

Lisa and Ryan were married in a Spanish courtyard just a three-minute walk from their villa. Photo courtesy of Phil Crozier.

The desire to keep weddings intimate and to spend more time with friends and family is a common thread in destination weddings and was a large part of the decision-making process for another couple, Lisa and Ryan Leonard.

The two met in Spain in 2008, when Lisa was spending a term abroad for her studies at the University of Calgary. There, she happened to met Ryan in the Canary Islands while he was on vacation from his home in England. Despite living on opposite sides of the world, they stayed in contact and Lisa eventually moved to England to be with him.

Ryan proposed in January 2012, and they found themselves in a situation similar to Chantille and Tyler as they began exploring whether they should get married in Alberta or in England.

“Either way we looked at it, we’d be making it easier for one person’s family,” says Ryan. Adds Lisa: “It dawned on us that if we had a destination wedding we would be able to have a small, intimate wedding that we could bring all of the important people in our lives to. So we chose Spain because it was special to us, in particular because that’s where we met.”

With their families spanning two countries, some of their closest loved ones still hadn’t met at the time. Lisa says bringing them all to Spain to share their wedding day in a beautiful stone villa brought their families together, literally and figuratively.

“At most weddings, the different families generally stick to themselves,” Lisa says. “They’re sitting at different tables; the bride’s family on one side, the groom’s family on the other. There’s not very much connection. But, with us all spending the week together, everyone really came together.”

When You Don’t Speak the Language or Know the City

After their January engagement, the two only had about five months to plan their wedding, starting with the venue. Heading straight into research, Lisa and Ryan dove headfirst into finding a villa. Lisa had always dreamed of a villa wedding, with the stone architecture and romantic, old-world feel. So, through the wealth of search engines, she stumbled across the perfect venue just south of Barcelona, near the beach town of Sitges.

With the locale locked in her sights, Lisa turned her attention to tracking down England-based wedding planner Valerie O’Donoghue to get some help. “I knew I had to find a wedding planner pretty quickly, because, especially in a country where the native language isn’t English, it felt really important in order to coordinate all aspects of the wedding, from flowers to catering,” Lisa says.

O’Donoghue has been planning weddings out of Barcelona since 2004. She says the overwhelming reason her clients choose to leave home for their weddings is because they feel they can have a more intimate celebration with their loved ones, instead of inviting hundreds of acquaintances and putting on an extravagant show.

“My opinion is that, because everyone is on holidays at a destination wedding, everyone is more relaxed,” O’Donoghue says. “When it is a local wedding, guests are just squeezing in the wedding between work and other real-life events.”

Get Help From Home and Abroad

After landing the villa and her wedding planner, Lisa says, things fell into place quickly over the following months. She quickly hired Phil Crozier from Calgary as their photographer, opting, as the Groves did, to bring her own photographer to the destination. The couple trusted his work and thought it was best to have him with them for the entire week.

“I highly recommend bringing along a photographer to spend the time with you, because you want to remember it all,” Lisa says. “If you spend all this money on having a wedding, you’re going to want to take those memories back with you.”

O’Donoghue broke through all the uncharted destination-wedding territory on their behalf, visiting the villa, sending photos and helping to send invitations. Once the couple arrived, she ensured the dress Lisa carried on the plane with her was steamed to perfection as soon as she was settled in.

“She knew everything that had to be done,” Lisa recalls. “I can honestly say that I didn’t really have to think about the details at all.”

Give Yourself Time to Prepare

The reception dinner was held next to the villa’s pool. Photo courtesy of Phil Crozier.

Lisa and Ryan had the luxuriously renovated farmhouse villa to themselves for the entire week, giving them time to get the wedding ready, decorate it to their desires and spend their time relaxing. Filling their days by drinking sangrias by the pool and playing cards by night, they were able to spend all week with their friends and family.

On the day of the wedding, Lisa remembers the setting being so beautiful, it was almost surreal. The ceremony was held in the town centre, just a few minutes’ walk away from the villa. As Lisa walked with her father through the Spanish cobblestone streets toward the aisle, she says she remembers everything being just as perfect as she’d hoped it would be.

As the sun set on their reception, all 45 guests sat around one open table until they could only hear the waves of the Mediterranean. “We couldn’t have asked for anything more,” she says.

All 20 Businesses Participating in the Celebration of Celebrations Event