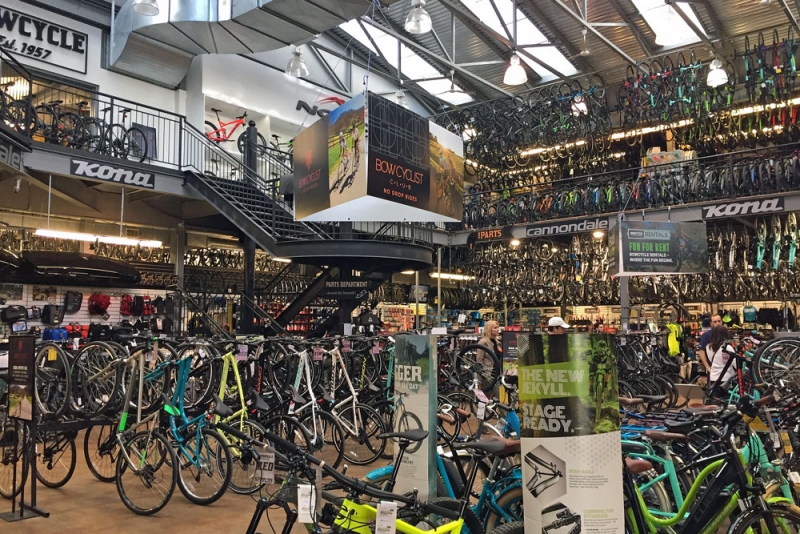 Inside Bow Cycle and Sports. Photograph by Karin Olafson

When Jim and Mary Sibthorpe founded Bow Cycle, not a lot of people were that interested in cycling. It was 1957, before Bowness was even amalgamated into Calgary, and Bow Cycle was the only store in the then-town of Bowness that sold bikes.

Over its six decades in business, Bow Cycle has seen a fair amount of change. In 1981, Bow Cycle split into two businesses: Bow Cycle and Sports, the bike-specific shop, and Bow Cycle and Motors, just for motorcycles. As the business grew, Bow Cycle moved location, but only a little. It’s been in four different locations all in the same Bowness block. It changed ownership, but only a little. The Sibthorpes’ two sons took over ownership of the two stores in the 1980s. One of Jim Sibthorpe’s grandsons currently owns 10 percent of Bow Cycle while the other 90 per cent is co-owned by six long-time Bow Cycle employees.

We spoke with Franzky and Darrell Elliott, two of the six current Bow Cycle owners, to hear some stories from Bow Cycle’s six decades in Bowness ahead of its 60th anniversary celebrations.

Simply, bike culture in Calgary in the 1950s and 1960s wasn’t widespread. When Jim and Mary Sibthorpe first opened Bow Cycle in 1957, the store was less than 1,000 square feet and it was a general sporting goods store, selling everything from fishing supplies to motorcycles.

According to Franzky, the bike selection in the late 1950s and early 1960s was limited – only CCM bikes, probably -and appealing to only a few Calgarians. Until the 1970s, cyclists were a niche group. Calgarians who did own bikes would ride single speed bikes, without helmets and certainly not wearing snug, lycra outfits.

The story of how 10-speed bikes really changed things

When 10-speed bikes became available in the 1970s, Elliott says it brought bikes to the masses. This new bike was faster and easier to ride because of its gears. Biking was now more accessible and trendy.

Elliott has seen bike trends change over his years at Bow Cycle. BMX and mountain biking gained popularity in the 1980s. Road biking became trendy in the 1990s. And for the last 15 years, Bow Cycle has seen a steady sale of cruisers.

The story of the Shaggy, the Paskapoo and the Poo II

In the 1990s, Bow Cycle worked with Norco, a Canadian bike manufacturer, to do some in-house cruisers. The paint colours selected were based loosely on the Pilsner colours. The men’s version of the in-house bike was named the Pilly and was green with hints of other Pilsner colours.

Bow Cycle’s in-house bikes didn’t stop there. The Pilly (and the Skirt, the women’s specific version of that bike) was just the beginning. The next in-house bike was inspired by and named after an employee whose nickname was Shaggy. There were three sizes of Shaggy on sale – the Shaggy 20, Shaggy 24 and Shaggy 26. What made it special was the artwork of Shaggy’s face on the head tube of each bike, representing this employee growing up, just as he had grown up working in Bow Cycle – he had worked there from his teens and into early adulthood. The art depicted a young Shaggy on the 20, a slightly older version of him on the 24 and a full-grown adult Shaggy on the 26.

There was also a blue and white dirt jump bike called the Paskapoo, named after the Paskapoo Slopes. It was a huge hit and the next year the Poo II was released. Franzky says that for people in the know, a special decal sheet was available if you purchased this bike.

All these bikes were limited edition, but Franzky says that every so often, you can still see these special custom bikes being ridden around town.

The story of how the Tour de Bowness became a thing

For the last 15 years, hundreds of amateur cyclists register to compete in a three-day cycling event that includes a road race in Cochrane, a hill climb and a criterium around Bowness. (A criterium is a multi-loop road race on a closed course. It’s fast, it’s exciting and you can catch a lot of the action.) And it all started because Darrell Elliott needed something to do.

Darrell Elliott, one of the current co-owners, was the original organizer of the Bow80, a challenging mountain bike race held every September. When another Bow Cycle employee took over the organization of that event, Elliott decided to try something different. It was 2002, just after the surge in interest in road biking, so Elliott launched a three-day road race called Tour de Bowness for amateur cyclists. Bow Cycle employees volunteered to run the event and after it all wrapped up, there was a party atmosphere – the third race was on the same day as the Bowness street festival.

That first year, about 100 people competed and a few people came to watch. Now, it’s one of the premiere races in the province for amateur cycling. Last year – its 15th year, – the event had close to 300 racers and almost 9,000 people watched the event.

Almost three decades ago, Brian Sibthorpe decided to do something special during the Christmas season. Throughout the month of November, Calgarians could donate their no-longer-wanted-or-used kids’ bikes to Bow Cycle and the bike shop mechanics would fix them up. The tuned-up bikes would then be donated to charities (like Magic of Christmas and Kamp Kiwanis) and given to Calgary kids as Christmas presents. They called the project Bikes for Kids.

That first year, they were expecting a few donated bikes. But, word got out, and the shop received more than 500 donations. “We had hundreds and hundreds of bike donations that first year,” says Franzky. “And the interesting thing was, we saw how Calgarians cleaned out their garages! We got 10-speeds from the 1970s and department store bikes from the 1960s.”

If you’re taking your bike beyond city limits – or even beyond borders – you want to make sure it works well. That’s especially true for Laval St. Germain, a Calgary adventurer who has some impressive, adventurous achievements under his belt. (This is the guy who was the first Canadian to make it to the Mount Everest summit without supplemental oxygen and summitted the highest mountains on six of the seven continents.) According to Franzky, St. Germain “puts his bikes through the paces.” St. Germain took his Bow Cycle bike (plus two more that his kids rode) to ride the Dempster Highway between Yukon, N.W.T and Inuvik.

Roughly 20 years ago, the Bow Cycle team was given a challenge. A mother came into the store saying it was her young son’s dream to ride a bike. Her son was born with all four limbs underdeveloped and was a quadruple amputee, meaning Bow Cycle couldn’t just sell them an in-store bicycle. It was a challenge that they were more than happy to take on.

“We know people who do fabrication and welding, so we built this kid a custom bike,” says Elliott. “He couldn’t hold brakes, so we built the bike with something called a ‘bum brake’ – if he pushed his body back, the bike would stop. And, we had to create mounts so he could hold himself onto the bike.” Bow Cycle built him at least four custom bicycles over the years, allowing him to keep cycling as he grew up.

According to Franzky, that kid was Jay Milley, who went on to represent Canada in track road cycling at the 2012 London Paralympic Games.

While there was a huge, in-store party to celebrate Bow Cycle and Sport’s 50th anniversary, things are going to be more focused on the community for its 60th anniversary. There’s going to be a fundraising campaign for three charities – Huntington Society, Wellspring Calgary and the Calgary Cerebral Palsy Association – with events like poker tournaments, a silent auction and generation donations. The goal is to raise $60,000 for the charities. It all starts in May 2017.