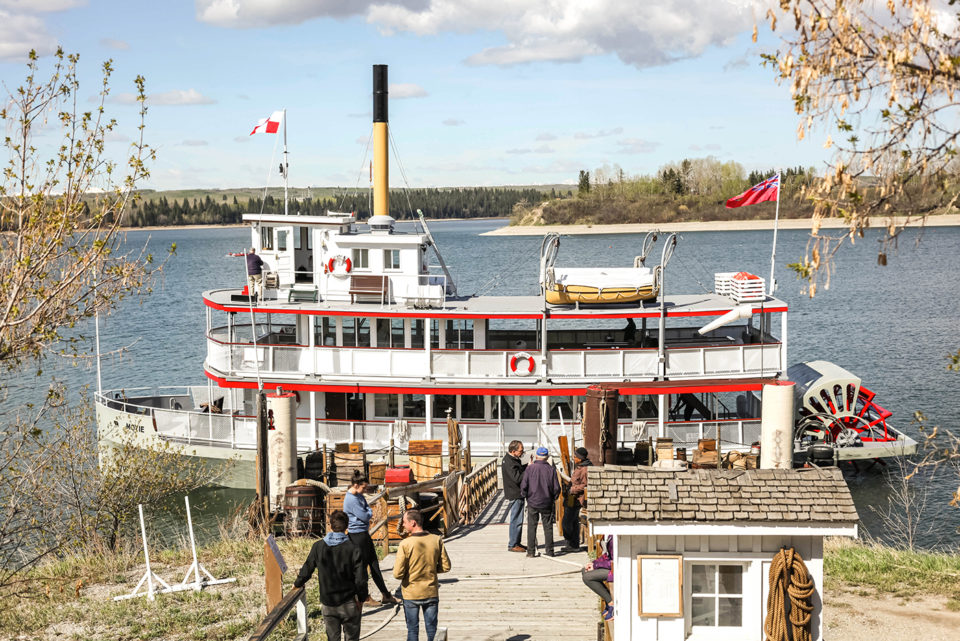 Heritage Park‘s beloved S.S. Moyie is back sailing in the water after a year-long hiatus.

While the City of Calgary was completing repair work on the Glenmore Dam last summer, Heritage Park had to dry-dock the S.S. Moyie because the water levels would be too low for it to set sail. This was the first season that the 54-year-old ship was out of the water since it came to the park in 1965 and Heritage Park wanted to take advantage of the opportunity. Significant repairs took place while it was out of the water, resulting in the largest cosmetic and structural overhaul that the S.S. Moyie has ever had.

Each year, the S.S. Moyie takes more than 120,000 passengers around the Glenmore Reservoir. Returning guests will notice brand new carpeting in the saloon, a fresh coat of paint and new mahogany handrails in the viewing areas. These cosmetic upgrades happened alongside electrical and structural repairs that will keep the ship afloat for at least another 15 years.

The S.S. Moyie at Heritage Park isn’t the actual namesake vessel — which is docked in Kaslo, B.C. as a historical museum that you can tour — but is a replica that is about half the size of the original. The original S.S. Moyie was owned by the Canadian Pacific Railway and was commissioned to be built, along with five other vessels of similar size, to travel up and down the Stikine River to carry miners and materials to and from the Yukon gold rush. But, by the time that the steamships were built and materials for the railway were secured, the gold rush had moved from the Yukon to Alaska.

Then, in 1898, the S.S. Moyie was dispatched to Kootenay Lake where it filled in the missing transportation gaps between CPR railway terminals by ferrying people from one side of the lake to the other.

Captain Andrew Hooper of the S.S. Moyie, and a historian of the vessel, explains that it would run up and down the lake connecting small villages and farms. “People would just flag it down as it went buy and ask to have crates of apples taken to market place. It ran until 1956 and was so long-lived and fondly remembered that when Heritage Park started up, the Board basically said that we really want to have a paddleboat.”

Since it wasn’t cost efficient to import a steamship that was still being operated in the 1960s, especially since they needed crews of 20 or more to run and their engines polluted the waters, Heritage Park decided to have a replica built in Vancouver that was then shipped to Calgary. To this day, you can still see plaques and life preservers across the ship donning “Vancouver.”

If you’re interested in visiting the S.S. Moyie, it’s included in the Park’s admittance and you can ride it as many times in a day as you wish. Heritage Park will once again be hosting Captain’s Cruises July and August, with a special Country Cruise taking place during the week of the Calgary Stampede. During Captain’s Cruises a live band plays on-board while guests are invited to sample gourmet hors d’oeuvres and different beers and wines.

A new edition to S.S. Moyie this year is Monday Mornings on the Moyie, where attendees will have a continental breakfast on the docks followed by going on the first cruise of the day. These will take place every Monday until September 2.