This year, CBC’s Heartland celebrates its eighth season, making it the longest-running one-hour drama in Canadian history. The family-friendly series, shot in Calgary, High River and near Millarville, focuses on the adventures of the horse-loving Fleming clan and is beloved by fans around the world – it is licensed in more than 119 countries and a million viewers tune in each week.

For Heartland‘s stars, including Ontario-native Amber Marshall, who plays Amy Fleming, Alberta has become home. Marshall bought and lives on a ranch near Okotoks. The show also provides steady work to local production crews, a third of which have worked on the series since season one. Heartland was recently renewed for a ninth season, which will start shooting in May and will air next fall.

Actors Amber Marshall, Graham Wardle, Madison Cheeatow and Shaun Johnston catch up before a blocking rehearsal of the dining room scene. The Heartland cast regularly gives back to local charity. Following the devastating floods of 2013, the cast hosted a behind-the-scenes tour of the set to raise funds for the town of High River, which serves as the fictional town of Hudson.

Alisha Newton, who plays the role of Georgie, gets a quick hair touch-up before shooting begins. Hair and makeup is done as soon as the actors arrive; afterward, they’re called to the set for blocking and rehearsal.

Cameraman Damon Moreau operates the camera and works closely with the director of photography Craig Wrobleski to shoot each scene. 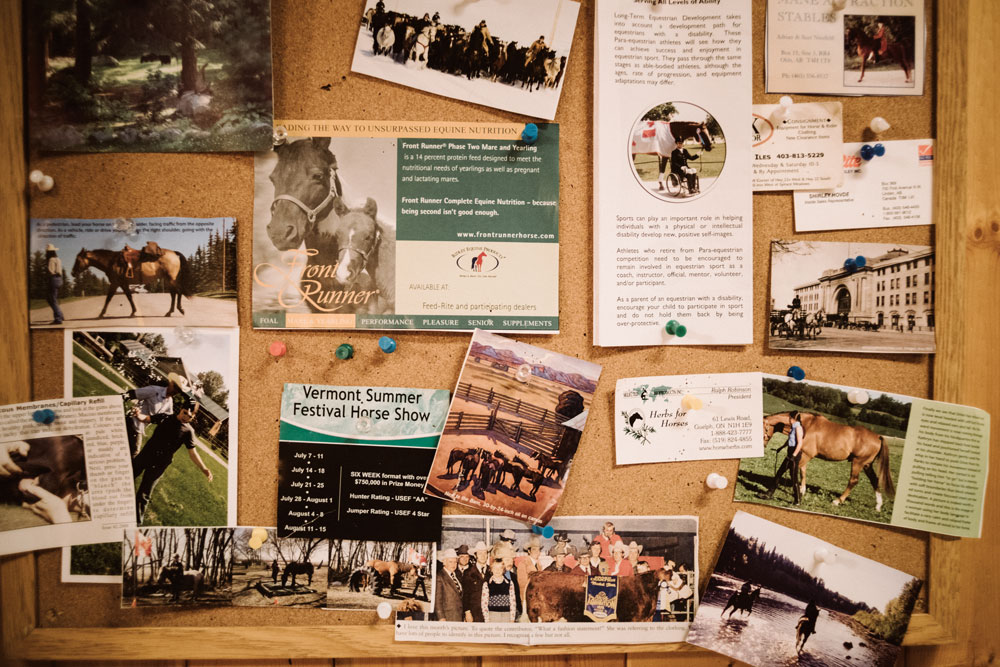 Taped marks for the actors help the camera crew track and shoot the movement of the scene. The actors aim to stop on their marks with their toes on the horizontal bar.

Stand-ins generally resemble the actors, especially in terms of height and size, and hold their spots during the lengthy set-up of each scene. Here, Mariah Johnson, the show’s female stand-in, helps set up a shot.

George Tarrant is Heartland‘s sound mixer. Together with the boom operator, Tarrant records the production sound on set during each scene and has mixed sound for more than 54 episodes of the series.

Madison Cheeatow, who plays Jade, waits in the wings. Cheeatow joined the cast in season seven.

Producer Jamie Paul Rock and director Stefan Scaini talk while they wait for the scene to be prepared for shooting.

The interior and exterior scenes of the Heartland Ranch, including the interior of the barn and Ty’s trailer, are often shot inside the studio.

Even the landscape, including hay bales, is really a canvas backdrop inside the Currie Barracks studio.

Heartland was one of the last Canadian series to shoot on film; the production switched over to digital in season three. Typically, two cameras are used when shooting a scene, a primary “a” camera and a “b” camera, which is used for additional footage.

Heartland airs Sundays at 7 p.m. until the end of March on CBC. Season nine will start shooting in mid-May and will air starting in fall 2015.

This article has been edited from the original to correct the spelling of Shaun Johnston’s name and to add the updated information about the ninth season.