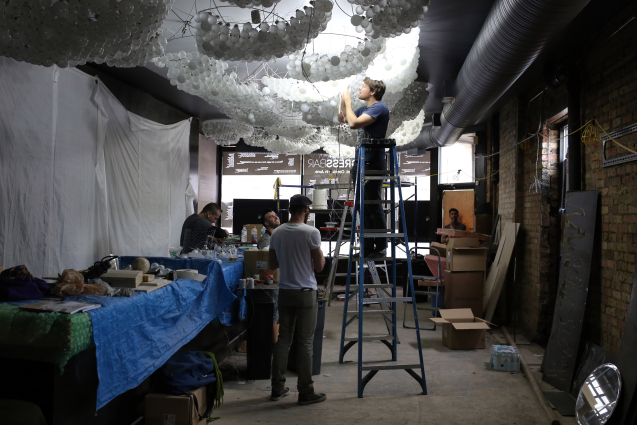 The first edition of CLOUD – an interactive installation made from 6,000 reclaimed light bulbs – was unveiled 10 months ago at the Nuit Blanche arts festival in Calgary. Since then, life has been interesting for artist-collaborators Caitlind r.c. Brown and Wayne Garrett.

CLOUD trended on Twitter and caught the attention of the international arts media. Brown and Garrett were invited to install a second edition at the Moscow for Art Experiment 2013. Most recently, they spend much of May and June in Chicago wrestling with steel, mylar, motion sensors, LEDs and 15,000 incandescent light bulbs to create CLOUD CEILING, an installation that is now the centerpiece for the Boystown district’s Progress Bar.

It’s the artists’ first commissioned work, and also their largest. The first edition of CLOUD was on display for six hours; CLOUD CEILING needs to last for years. Because it’s in a crowded bar, Brown and Garrett had to reconsider the interactive pull strings used in the first two editions, instead installing motion sensors that change then in response to movement below.

CLOUD: SECOND EDITION in Moscow, from below.

The success of CLOUD has opened doors for the artists. “If anyone had told us a year ago that we’d be in Moscow and Chicago, we wouldn’t have believed you,” says Brown. “We’ve only been making art for a couple of years, so to have some of the opportunities we’ve had this early in our careers – it’s unheard of. It’s an honour.”

Brown jokes that CLOUD has attracted so much attention because it’s, “shiny enough,” but the sense of wonder the installations create is no small accomplishment. Garrett says, “The original intention with the first CLOUD was to create something beautiful and inspirational. The goal was just to get people to interact with each other.”

The artists have long been interested in the possibilities of public interactivity; both were involved with the highly interactive Wreck City project in April, which saw a strip of Sunnyside houses slated for demolition converted into a massive art project.

Says Brown, “We’re interested in people and how people move, and what this entity that is the public is capable of,” Brown says.