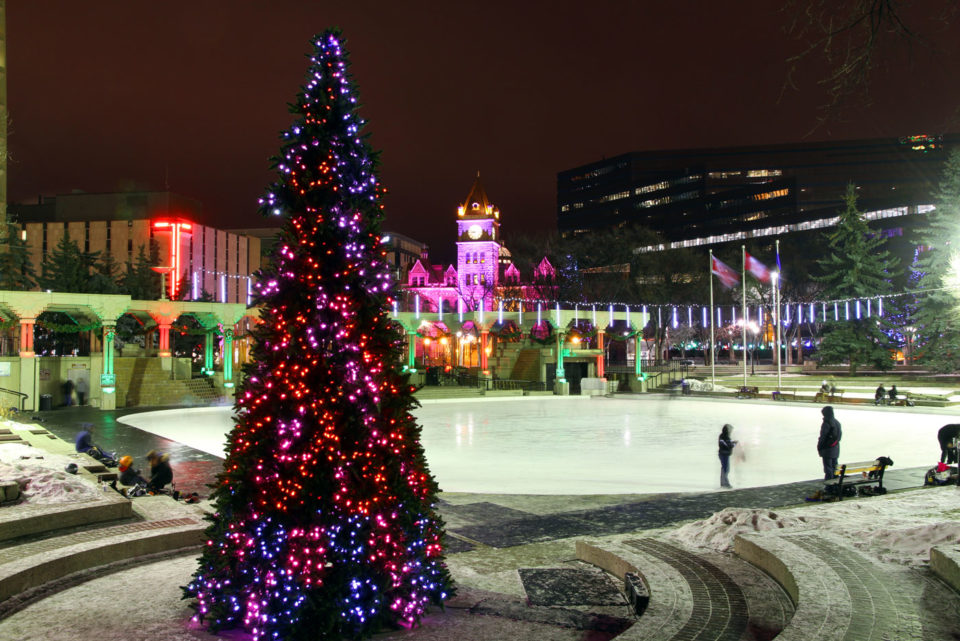 Read on to learn more about the correct answers to our Local Holiday Trivia quiz.

1. Stephen Hair has been portraying the role of Ebenezer Scrooge in Theatre Calgary’s A Christmas Carol for 26 years.

This Charles Dickens classic will once again be coming to the Max Bell Theatre from Nov. 28 to Dec. 28, for its 33rd annual holiday performance. Adapted for the stage by Geoffrey Simon Brown, this two-hour play, which follows Ebenezer Scrooge as he is visited by the spirits of Christmas past, present and future, is the perfect holiday tradition for the entire family. This year, Theatre Calgary put out an “open casting call” for the role of Ebenezer Scrooge, and despite a few strong contenders, you will still get to see the famed Stephen Hair portray the role. You can see the video of notable Calgarians including the Mayor and Andrew Phung “audition” here.

2. Dave Kelly’s 5th Live Annual Holiday Special will feature Jill Barber, who will be performing classic holiday hits, along with songs from her recent album, Metaphora.

Renowned talk show host, writer and actor, Dave Kelly, will host his 5th Live Annual Holiday Special on Saturday Dec. 14 and Sunday Dec. 15 at the Jack Singer Concert Hall. This variety show will feature internationally acclaimed artist Mandy Stobo, whose artwork is projected onto the backstage wall while she paints it in real time, as well as the founder of Village Brewery and lifelong friend of Kelly, Jim Button. There will also be a special musical guest, along with performances from the Calgary Stampede’s Young Canadians and the show’s house band, the Flat Whites.

3. Cococo’s Chocolaterie Bernard Callebaut’s dark chocolate dipped cherries feature organic B.C. cherries that are soaked in liqueur for 100 days before they are dipped in in semi-sweet chocolatey goodness.

Indulge in this limited-time-only, adult treat made with organic B.C. cherries soaked in liqueur, dipped in fondant, and hand dipped once again in semi-sweet chocolate. Cococo is based in Calgary and sells Chocolaterie Bernard Callebaut products all made with sustainable and fair-trade cocoa and cocoa butter. This item is known to sell out, so head to one of the nine Calgary locations to pick yours up today.

Visit one of nine Calgary locations, or find them online at cococochocolatiers.com.

4. Heritage Park’s Once Upon a Christmas event showcases four historical homes, each portraying a different Christmas tradition inside. The Sandstone house, which features Scottish traditions, highlights Scotland’s past ban on Christmas and Hogmanay, the holiday they celebrated instead.

Taking place on the five weekends leading up to December 25, Heritage Park’s Once Upon a Christmas offers Calgarians a traditional Christmas experience, with the modern amenities we have come to love at the holidays. From Gasoline Alley, to the Wainwright Hotel, you can find Christmas carolers dressed in traditional garb singing carols from the early 1900’s, a holiday play in the Canmore House, tours of historical homes and buildings, a hot chocolate bar, fresh baked goods from Alberta Bakery, shopping at Plaza Mercantile and more.

General admission is $11 and there are reduced rates for children, youth and seniors. Get tickets at heritagepark.ca.

5. First cast as a mouse, Alberta Ballet Dancer Kelley McKinlay, who can be seen portraying Drosselmeyer and the Sugarplum Fairy during the Calgary showing of Alberta Ballet’s The Nutcracker, has been dancing with Alberta Ballet for 17 seasons, and performed in his first Nutcracker when he was 3 years old.

This year’s annual presentation of Edmond Stripe’s The Nutcracker is brought to life by 120 performers from the Calgary Philharmonic Orchestra, children from the Alberta School of Ballet, and dancers from Alberta Ballet Company. Take note of intricate details such as the wolf’s eyes, or the Rat Tsar costume made with hundreds of rhinestones, which are designed by Emmy-award winning designer, Zack Brown. Showings of this timeless holiday tradition, inspired by imperialist Russia and music composed by Tchaikovsky, will be at the Southern Alberta Jubilee Auditorium from Dec. 13 to Dec. 23.

6. The Lougheed House started holding Christmas events in 2008, but the house itself has been around for over 100 years, and has hosted the likes of musicians, artists and even British Royalty while occupied by the Lougheed family, who inhabited the house from 1891 to 1936.

Each year, eight local designers are called upon to transform the Lougheed House from its traditional Victorian-themed state into a holiday wonderland.  This year’s designers were tasked with minimizing their economic footprint, and only used sustainable, eco-friendly Christmas decor. After admiring the scintillating holiday decorations, stop in for the one-man performance of A Christmas Carol, where Steven Méthot animates all 30 characters of the famed Christmas story, accompanied by a musical trio.

Admission is $8.50, with discounted prices for seniors, students, and children. Find out more at lougheedhouse.com

One of the best parts about the holidays is the surplus of light displays found around the city.  At this year’s Zoo Lights, there will be over two million light bulbs scattered throughout the park, and more than 200 light figurines and interactive or choregraphed light displays. In addition to past favourites such as strolls down Lover’s Lane, Santa photos and a skating rink, this year will also include axe throwing and sensory Sundays for sensory sensitive community members. Adult guests will also be able to enjoy an alcoholic beverage while strolling under the twinkling light structures.

For 31 years, hundreds of Calgarians, Jewish and non-Jewish alike, have gathered on Dec. 23 to light the city Menorah, and savour traditional Jewish latkes, while singing along with classic Chanukah music. Past guests have included Calgary mayors such as Dave Bronconnier, and Al Duer, late Premier Ralph Klein, and Prime Minister, Stephen Harper. This year, the event will be taking place at City Hall, with an appearance from Mayor Naheed Nenshi. The event will also be broadcast online at chabadalberta.org.

9. The Lions Festival of Lights uses more than 500,000 light bulbs on 16,000 strings. This year’s extensive light display was supported by 3 kilometres of power cords.

From 6 p.m. until midnight, every night until Jan. 8, 2020, you can experience Calgary’s largest, free drive-by festival of lights in Confederation Park, and along 14 St. N.W. This year, the festival will also be 99 per cent Green, with the use of only LED lights. With approximately 57,000 visitors each day, the Calgary Lions Club starts preparing for the event months in advance, and all the set up and construction is done by Lions Club volunteers.

Get more information at lionsfestivaloflights.ca.

10. The Polar Express, which can be experienced at Aspen Ridge Crossing, was originally a book by Chris Van Allsburg, published in 1985, which was then made into a movie in 2004.

Embark on a whimsical, holiday adventure aboard the Polar Express Train at Aspen Ridge Crossing in Mossleigh, Alberta, just 45 minutes southeast of Calgary. This one-hour train ride, which takes place in vintage rail cars dating back to 1946, takes passengers to the North Pole and includes a golden ticket, hot chocolate in a collector’s Polar Express mug, as well as visits from characters from the movie, and a reading of the Polar Express book. Passengers are encouraged to wear their holiday pajamas, and at the end of the ride, children will meet with Santa and be given their own sleigh bell to take home.

Train rides will occur until Dec. 24, and tickets can be purchased at aspencrossing.com.

11. Olympic Plaza has the only refrigerated outdoor ice in Calgary.

If you are looking for a place to skate this winter, Calgary has plenty of options. The City of Calgary alone has seven rinks that they maintain, which are open through the middle of December until February (depending on the weather), along with 35 volunteer-run rinks. In addition, there are a number of community rinks located throughout the city. Rinks such as Olympic Plaza and Bowness Park Lagoon also have skate rentals available.

Find out more at Calgary.ca.

12. Market Collective has been hosting markets throughout the year, as well as at the holidays, since their first market at Carpenter’s Union Hall in 2008.

If you have yet to start your Christmas shopping, have no fear, because Market Collective will be hosting its annual holiday market the first three weekends in December at the BMO Centre. With more than 150 vendors, you can find everything from delicious baked goods, to second-hand clothing, to local, handmade pottery and more. MC traditions also include a photobooth created by local artisans, where visitors can be photographed with Santa, and indigenous dancers, who perform every Sunday at noon.

Tickets can be purchased at the door. Find more information at marketcollective.ca.

Rules and Regulations: Win a Winter Getaway to Banff