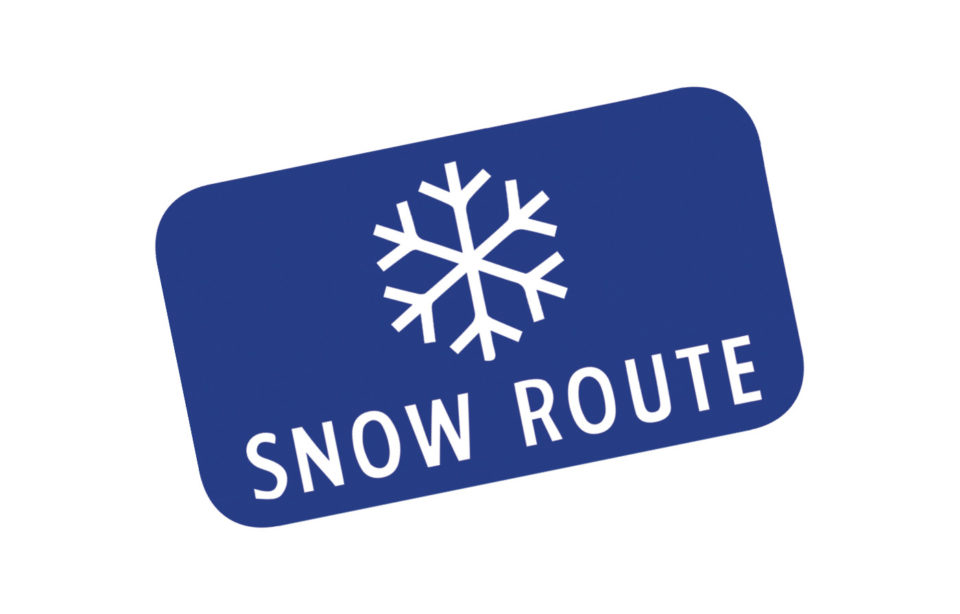 When a perfect storm of heavy snow and freezing weather hits the city, a snow route parking ban is inevitable. While not an exact science, the city looks for a few indicators before and during snow events when considering a ban, including whether a “significant” amount of snow has fallen and/or built up. Ultimately, the City’s traffic engineer has the final say.

Marked by blue signs bearing a white snowflake, snow routes include major roadways, collector roads and most bus routes. A road gets designated a snow route to facilitate efficient clearing following major snow buildups. Bans are usually called one to two days ahead of time and stay in place for up to 72 hours after being declared, or until the City calls them off.

When parking bans are on, the onus lands on vehicle owners. If you live or work on a snow route, you’d best be proactive. Calgary Parking Authority (CPA) suggests tracking down a garage, parkade, surface lot or a secondary side street not designated as a snow route as an alternate parking spot. Just because the plow has gone by, don’t assume you’re in the clear — vehicles need to stay off the route until the ban has officially ended in the event of a double clearing pass.

If you’re migrating to avoid winter weather and think a ban may be in the forecast while you’re away, err on the side of caution and move your vehicle off the snow route ahead of time. Or arrange with a neighbourly parking pal to move your car if unexpected flurries hit and a ban is called. On the flipside, if you spot a neighbour’s car on the route during a ban, knocking on their door to give a heads up could save them a ticket. Disregarding the ban comes with a $120 fine (you’ll only be charged $90 if you pay within 30 days or $80 within 10 days). Towing isn’t CPA’s street-clearing method of choice, but it will haul your car to an impound lot if it’s continuously left on the streets or if CPA deems it a safety risk.

There are a handful of snow route exceptions: on-street accessible parking zones are excluded at all times. Snow routes in Business Improvement Areas (BIA) and throughout downtown limit parking bans to overnight from 9 p.m. to 6 a.m. During those hours, CPA opens all parkades and surface lots for complimentary parking.

Parking in alleys during a snow route is another option (provided they’re outside of the central traffic zone) but take into account that the alley needs to be wider than 6.1 metres, with at least 1.5 m between your vehicle and any driveway or garage, and not across from either. You’ll also need to be at least one metre away from collection carts and there has to be at least three metres of clearance on either side of the vehicle to allow others to pass through unobstructed. If an alley is your back-up plan, keep a metre stick alongside the windshield scraper in your back seat this winter just to be safe.

Stay up to date on snow route bans through local news and radio channels, by calling 311 (the City’s general info line), following the City on Twitter at @yyctransport, or by checking calgary.ca/snow, where you can sign up for text notifications and email alerts. You can also download CPA’s MyParking app to receive notifications to your smartphone when a ban is declared.