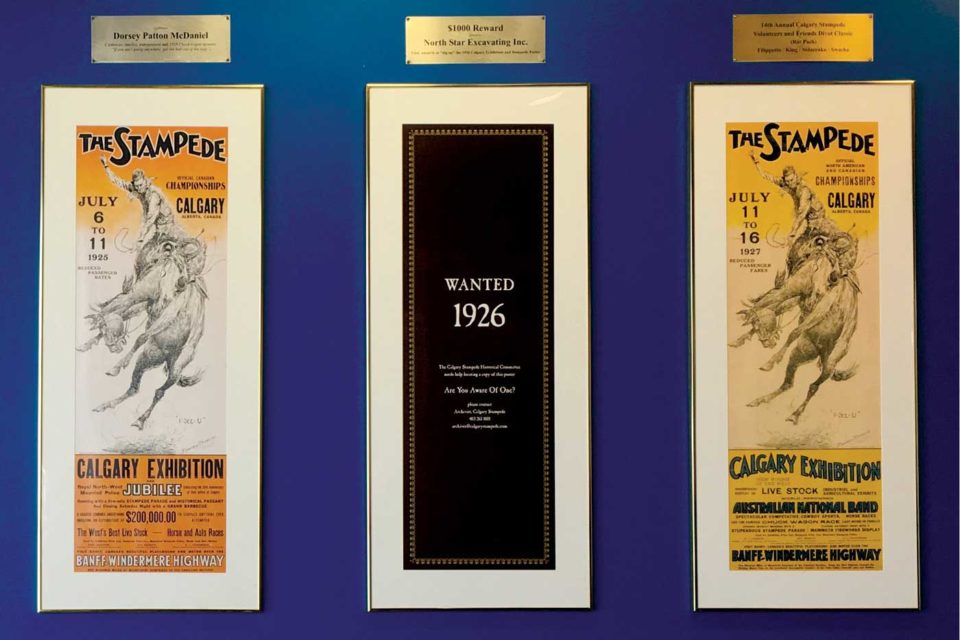 The poster for the 1926 Stampede is one of a few that are currently missing from the archives. Photograph by Austin Jansen.

Editor’s note: Since this story was published, the poster from 1930 has been found.

Running through the Plus-15 connector from the BMO Centre to the Stampede grounds, the Parade of Posters is a display of nearly every poster the Stampede has produced since its inception in 1912. But as you peruse the colourful prints, you’ll notice three black signs with the word “wanted” printed in white type where the 1922, 1926 and 1930 posters should be. These placeholders recall old Western “wanted” posters by offering a $1,000 reward to the person who brings the missing subjects to the authorities.

“The majority of our historical collection comes from the community realizing or feeling that they have something valuable and then bringing it to our archives, asking us if we want to preserve it,” says Christine Leppard, historical specialist with the Calgary Stampede. “We get a lot of [posters] from the 1950s on, but fewer and fewer from the early period are around. If we do see any available for purchase or where collectors come to us, we jump on them.”

The process extends beyond posters to other aspects of the collection. In 2017, the Stampede acquired a cowboy hat that had belonged to Clem Gardner, a famous cowboy with a long history at the Stampede, after someone drew the historical department’s attention to an auction where it was for sale.

If you have one of the missing posters, or another item the Stampede might be interested in, email archive@calgarystampede.com.

This article appears in the June 2019 issue of Avenue Calgary.