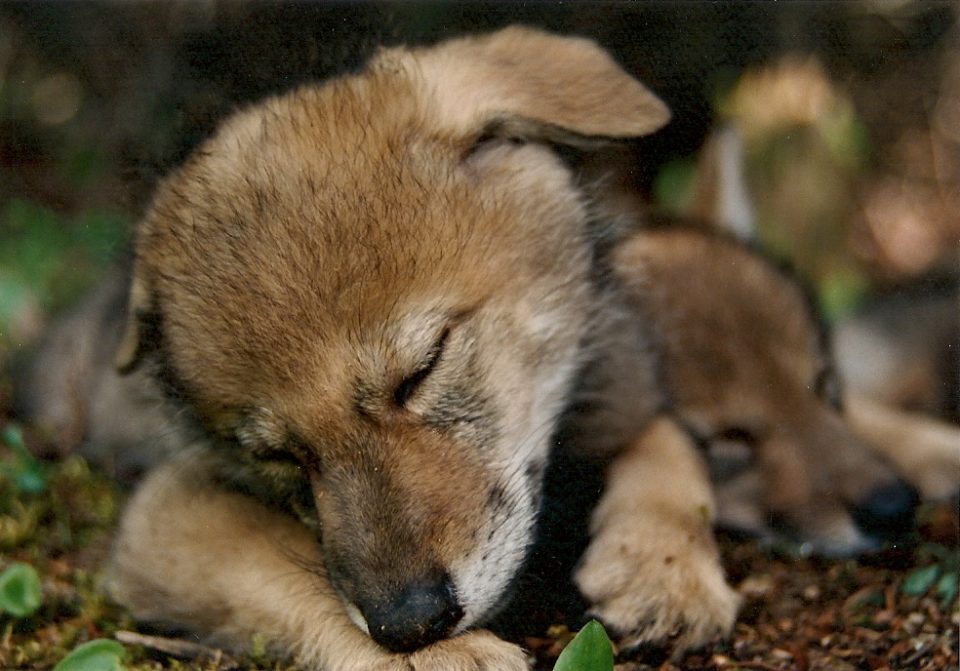 A coyote pup raised in captivity. Photo by Shelley Alexander.

Anyone who’s seen a group of coyotes flit through a back alley or rummage through trash in Calgary has probably asked themselves questions like “Are my pets and kids safe?” or “Should I be concerned about these animals?”

Here to answer those questions is Dr. Shelley Alexander, a professor of geography at the University of Calgary. She has been studying animals for more than 20 years and coyotes in particular for more than a decade. She’s researched coyote diet, habitat and even how they’re portrayed in the media, to better our knowledge and interaction with these animals.

Alexander recalls an incident in 2005, when coyotes were killed because some children had been chased and scratched by them in Confederation Park, as a catalyst for further research into the creatures we live with in the city.  “It seemed at that point a very timely thing to understand because we didn’t have any research on that topic in Calgary,” she says. “It started out broader than [just coyotes], but it really got narrowed down just to coyotes.”

What Coyote Diets Can Tell Us

With the help of several grad students, Alexander conducted a number of studies over the course of several years, including one examining their diets, which had surprising results. “The main thing we found is that coyotes were mostly eating natural food sources – things like small mammals, birds and berries,” says Alexander. “We were surprised at how few of the scats actually contained pets, because there had been a lot complaints that coyotes had been killing pets. Less than two per cent contained pet, but about 14 per cent contained garbage.”

Though there isn’t much information regarding the link between animal conflict and garbage eating in Canada, the information culled from U.S. statistics showed a link between the two. While Alexander and her crew weren’t able to show a statistical trend in Calgary, they were able to identify that hotspots where coyotes ate garbage were the same spots that led to conflict.

“That tells us is it’s important to manage garbage. Not every coyote that eats garbage is going to end up biting someone, but we know that garbage and habituation to that kind of food can lead to conflict.”

Coyotes whose parents are killed in culls suffer from a broken down social structure. Where the parents might have taught them where to eat safely, orphaned pup populations rebound fairly quickly and often are uneducated about how to safely avoid conflict with humans.

How Coyotes Are Presented in the Media

Another study conducted by Alexander and her grad students on the media portrayal of coyotes reinforces this notion. “We did the media content analysis and found that in 100 per cent of the attacks that were reported, all of those animals  [that were necropsied] were shown to have been eating human food and garbage,” says Alexander.

The other point to note from that study, conducted over the course of 15 years, was that the media had a tendency veer towards the sensational, reporting many types of incident, from a coyote running out and toppling someone to just walking through backyards, as “attacks.” When a coyote does kill, Alexander says, it is reported in an inflammatory way, using terms like “eviscerate” and “marauding,” whereas when coyotes are killed, the terms used tend to be softer, such as  “euthanize” or “dispatch.”

“The language is very sanitized when it comes to what humans do, but with coyotes, we use a language that stereotypes them as doing something out of the norm. The language is so sensational that it evokes fear in people. Research shows that media has the potential to create fear. And if people have nowhere to go to find information to counter it, then they run with that fear.”

Alexander points out that, on average about 2.4 people in the country are bit or scratched by coyotes per year. “It’s important for people not to be fearful of coyotes but to be respectful and aware, to be responsible for our own role when conflict arises.”

Alexander is currently seeking landowners in the Foothills/Parkhill region to take part in the Foothills Coyote Initiative by sharing their experiences with Coyotes. For more information, visit ucalgary.ca/canid-lab.