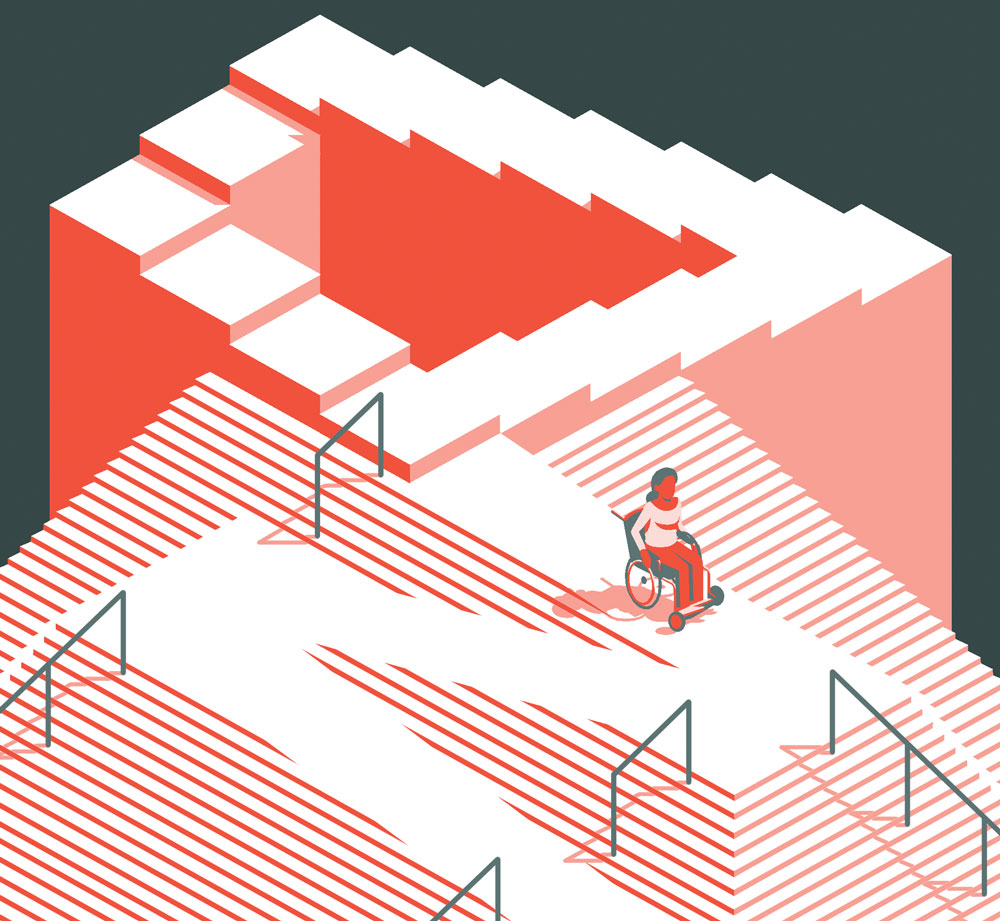 Calgarians tend to place a high value on independence. You could even say it’s part of our identity. From starting a business to leading a community, we pride ourselves on getting things done on our own terms. But for many Calgarians, that independence is compromised by barriers imposed by the way our city is built.

Darby Lee Young is a former para-alpine ski racer with cerebral palsy who encounters obstacles all over the city. “The minute there’s a barrier, my independence is gone,” she says. “If I can’t get into a restaurant on my scooter and I have to wait for someone to let me in, my independence is gone. Everyone should be able to move throughout their day-to-day lives independently.”

Nearly 14 per cent of Canadian adults – some 3.8 million people – have a disability. Physically, the most common types are those that cause chronic pain, reduced mobility and limited flexibility, which all impact how or if a person can access buildings.

The Alberta Building Code (ABC) was updated in 2014 to include a new section on barrier-free design – that is, design that accommodates people with disabilities with things like wider, wheelchair-accessible doors and hallways. The problem in cities like Calgary, where much of the urban fabric is decades old (at least), is that those changes don’t apply to anything built before the rules took effect.

“If you look at a building that was built in the 1980s, it may seem like the provincial code is quite weak, but that building would not meet today’s provincial accessibility standards,” says Pat Sweet, a safety codes officer with the City of Calgary, who sits on the City’s advisory committee on accessibility (ACA). “We can’t force building owners to make expensive changes every time there’s a code update.”

The fact that old buildings wouldn’t meet new standards is little comfort to people like disability advocate Mary Salvani, who struggles to navigate the many old buildings still used today. Salvani has cerebral palsy and osteoarthritis, and uses a cane and a walker.  She says barriers like narrow store aisles and steep ramps are especially common in older neighbourhoods like Inglewood, where she lives.

“Most places there, the walker doesn’t fit through the door, or there’s a step up,” she says. “Even at City Hall, I couldn’t get through the connector from the new building to the old building because of the stairs. I had to go around the outside, and I was exhausted by the time I got there. I don’t need to go everywhere or do everything, I just want people to see the problem and care enough to change it.”

The ABC represents the bare minimum, and has been improved on at the municipal level. The ACA’s access design standards – rules above and beyond the provincial building code that all City-owned and -run buildings must comply with – are more comprehensive, focusing on universal design rather than barrier-free design.

The two terms are often used interchangeably, but barrier-free design caters specifically to people with disabilities. “A universal space is accessible to all people, not only those with disabilities, but also seniors and families with strollers,” says Young, who used to co-chair the ACA and consults with architects on universal design through her company Level Playing Field. “It makes sure the space is inclusive, that it’s flexible and simple and requires low physical effort so that everyone can use it with minimum fatigue.”

Sweet uses the example of an entrance with a separate button-operated door. “That’s barrier-free, but it’s not true universality, which would have everyone go through the same door,” he says. “People with disabilities are accounted for, but universal design doesn’t single them out as needing extra accommodation, like the building code does. We wouldn’t need those separate access points if everything was just accessible from the beginning.”

Salvani says that while barrier-free design is intended to be inclusive, it often has the opposite effect. “When you separate people with something that says, ‘this is for people who can’t walk,’ it feels exclusive,” she says. “It reminds people of their disability.” Her hope is that people with disabilities are not only thought of in the design of new buildings, but that they are given a voice and a place within the design process.

The ACA estimates that 200,000 Calgarians have some form of disability. Mobility problems spike in seniors, and with the city’s aging population, it makes sense to plan now for a future in which people are less mobile. While the committee recommends private builders follow its example and incorporate universal design, it has no power to enforce that recommendation. And, like the ABC, the access design standards only apply to new buildings and renovations.

Most old buildings haven’t been renovated for accessibility because of cost. Retrofitting an existing building with universal features is expensive, but that cost all but disappears if features are planned from the beginning. “There’s no aspect of universal design that would increase the cost of a project,” says Eric Toker, principal architect at the Calgary design firm Toker + Associates, which has done work for both public and private clients.

Universal design isn’t a new concept; American architect Ron Mace coined the term in 1985. But its principles haven’t been adopted everywhere because of persisting misconceptions. “People often think if something’s universal, it’s going to be cold and institutional,” Young says, “but it’s just a matter of thinking outside the box. You can get towel racks that are also strong enough to be grab bars and don’t look institutional.”

The dearth of obvious examples of universal design presents a challenge from an architecture perspective. “The design community has an important role in ensuring our weight is behind universal design and showcasing it as a positive to our clients,” Toker says. “It’s not that they don’t want it, but historically it may not have been their top priority.”

Calgary is improving; the municipal complex’s accessibility was audited last year and some improvements were made. Most City buildings are expected to undergo a similar process. Federally, Carla Qualtrough, Canada’s first minister of sport and persons with disabilities, is also drafting a new national accessibility act. The first of its kind in Canada, it’s still in the early stages and will likely take five to 10 years to roll out, but Young says it will be a big step forward.

Separate from any legislation, Young believes the biggest barrier to widespread accessibility in general is society’s attitude toward people with disabilities and their needs. “People think of us as second-class citizens, and that’s how we’re treated,” she says. Salvani’s experience is similar. “No one thinks people with disabilities are capable of doing anything,” she says, “but if buildings are just designed well, we can.”