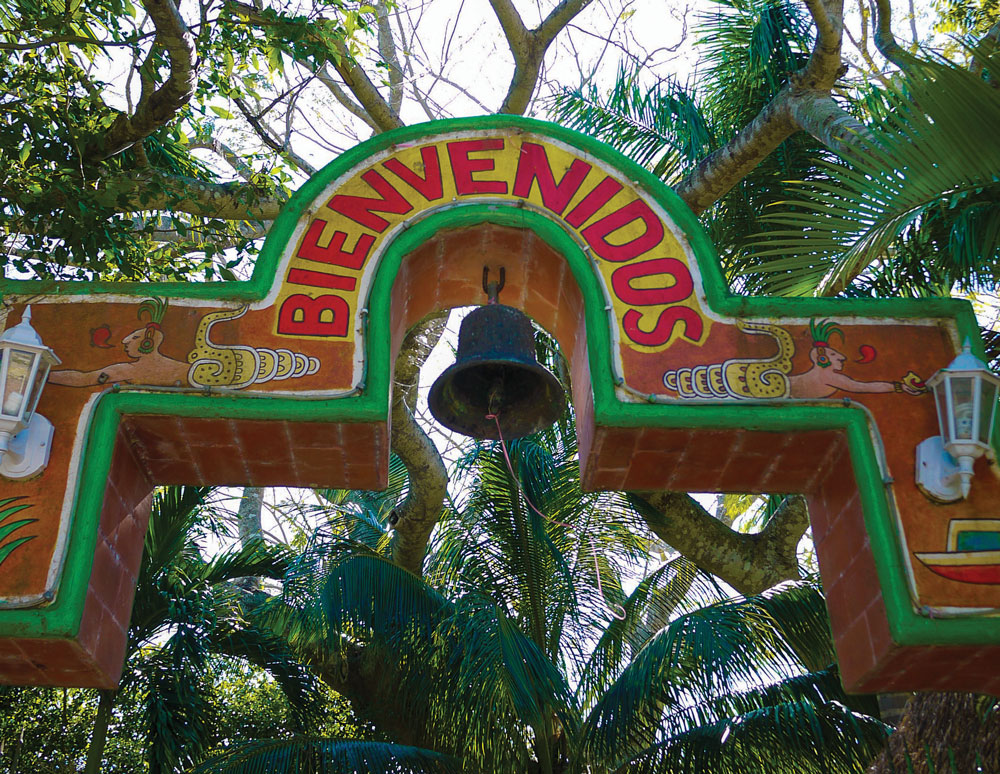 Discovering the Magic of the Mexican Town of Bacalar

Mexico has designated more than 80 pueblos mgicos, or magic towns, that offer visitors unique and significant experiences, so delighting in the discovery of the country’s off-the-beaten-path destinations is easier than ever.

The lagoon in Bacalar on the east coast of the Yucatn Peninsula.

I stand on the pier as sunrise reaches Laguna de Bacalar. I had been to this turquoise bauble in Mexico’s Quintana Roo state in the remote southeast as a kid, and I need to see if it has remained as exquisite as I remembered it. It has.

I arrive in the dark after five hours on a frigid night bus. Other than town roosters and lake birds, I share the dawn with a lone policewoman on night shift guarding Bacalar’s sole motorboat. Sunlight warms the day and unveils the blues and greens that inspired the Mayans to call Laguna de Bacalar the “Lake of Seven Colours.

The daubs of indigo blue in the lagoon mark cenotes – deep, natural wells fed by underground springs. The surrounding aquamarine water is as shallow as a baby’s bath and just as warm. White sand and gold-and-green reeds add to the lagoon’s colour palette, carving a dazzling 45-kilometre gash through the dense jungle.

The beach town of Bacalar sprawls on the western shore of the lagoon, the second largest freshwater inland lake in Mexico. Tourism here caters mostly to Mexican water-sports enthusiasts. The area is renowned for bird watching and is promoted nationally as a romantic getaway. It is also one of Mexico’s designated pueblos mgicos, or magic villages.

When I ask a local why Bacalar is magic, he suggests I discover that for myself. Never one to turn down a mission, I borrow a two-wheeled clunker of a bicycle and steer the single-speed steed toward the magic.

Discovering the history of Bacalar

The diesel-dusty Highway 307 that transects Bacalar clamours with truck traffic, sandwich hawkers and repair shops. To live the experience, I seek shade in a makeshift roadside greasy spoon and down warm beer and cold fried chicken. Cruising through the narrow streets of the locals’ Bacalar, I pass cheerful hand-painted signs advertising tiny pop-up restaurants, hardware stores and small shops. I wind my way to the main plaza, which is large and – at sun-drenched midday – empty.

On the edge of the plaza, the town’s historic hub, Fuerte de San Felipe Bacalar, glowers over the lagoon, cannons in its ramparts ready to blast any invading pirates. It’s hard to imagine sleepy Bacalar as a major Mayan city, as it was before being captured by the Spanish conquistadores in the 16th century, their first toehold in the region. The lagoon was strategically vital to transport the conquistadores’ plunder to their ships waiting on the Caribbean coast, 90 km away. 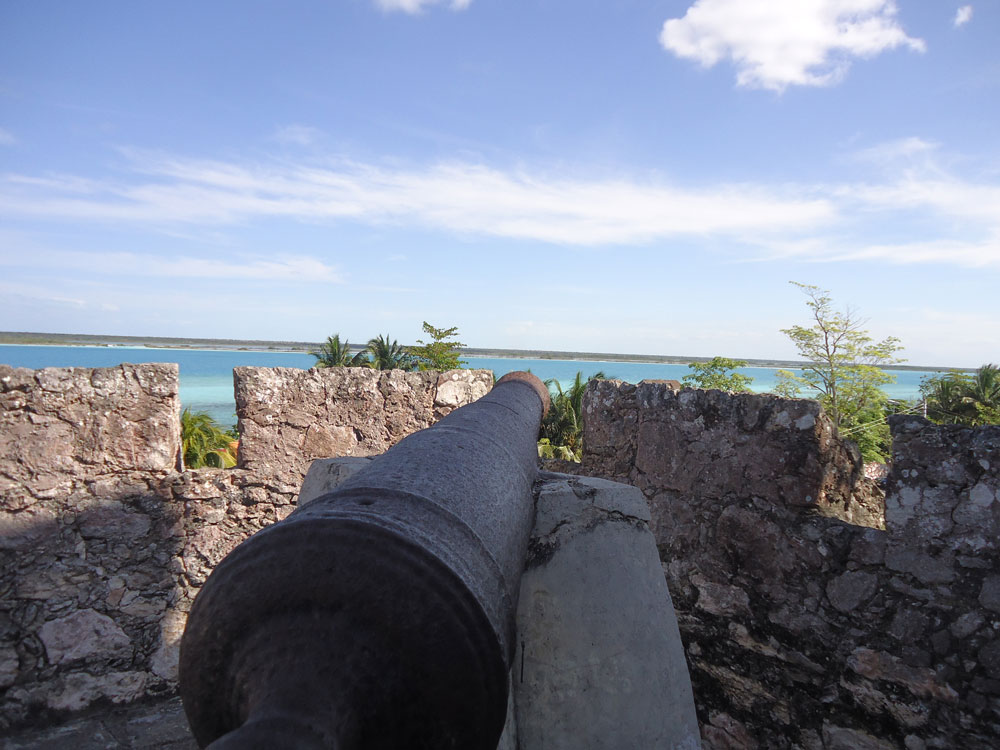 A historic cannon guards Bacalar’s oldest section of the town.

Surrounded by a wide and deadly moat, the fort testifies to the violent history in the following centuries. Images of savage massacres and bloody battles between Mayans, pirates and Spaniards loom from lurid murals in the museum.

Leaving the brutal past, I cross the palm-lined street and enter the pleasant present on the public beach. There I exchange my bike for a kayak and paddle along the reedy coastline, passing beach houses, modest and sumptuous; small hotels of various calibre and design; and a few other kayakers.

Strolling in the tropical evening, I follow the aroma of grilling seafood and find dinner at a basic outdoor restaurant on the plaza. The snapper is fresh, the beer cold and the service warm. Contented, I let the day go.

Succumbing to the magic 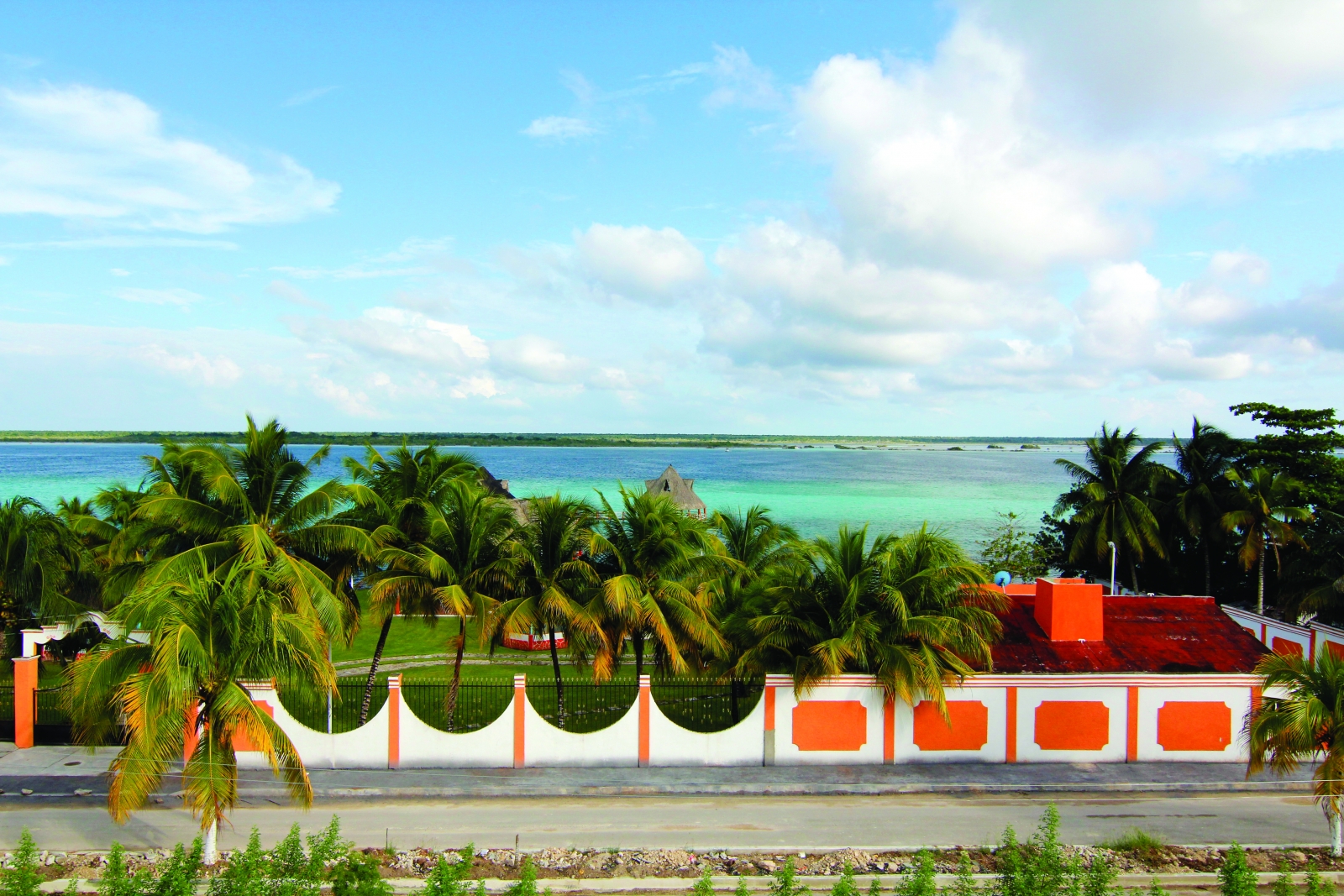 Awakened by roosters and unable to face my dilapidated bicycle, I hitch a ride with an accommodating local for the five km to Cenote Azul. Surrounded by jungle, the inky blue cenote is about 90 metres deep at its edge and at least 150 metres in the middle – the largest, deepest cenote in the world. I dive in, slipping into a silky velvet cocoon of water: smooth, cool and sublime.

After swimming a lap to the other side, I claim a shady spot in the rambling, open-air cenote-side restaurant. The exuberant decor celebrates all aspects of Bacalar’s violent and varied history. A jumble of antique rifles and ceramic bulls’ heads hang on the walls juxtaposed with old photos, murals of idyllic Mayan village life and random nautical artifacts. I order chilaquiles, a deliciously saucy and spicy tortilla and egg breakfast, then ceviche, a house specialty.

While submerging myself in the oasis, I realize that, on my mission to find magic, I’ve stumbled upon the essence of Mexico. Therein lies the magic.

To encourage foreign tourists to expand their itineraries beyond the bustling resorts on both of the country’s coasts, in 2001 the Mexican government created the Pueblos Mgicos program and campaign. More than 80 towns in Mexico are now designated as offering tourists magical experiences through their symbolic, social, cultural, natural or historical offerings.