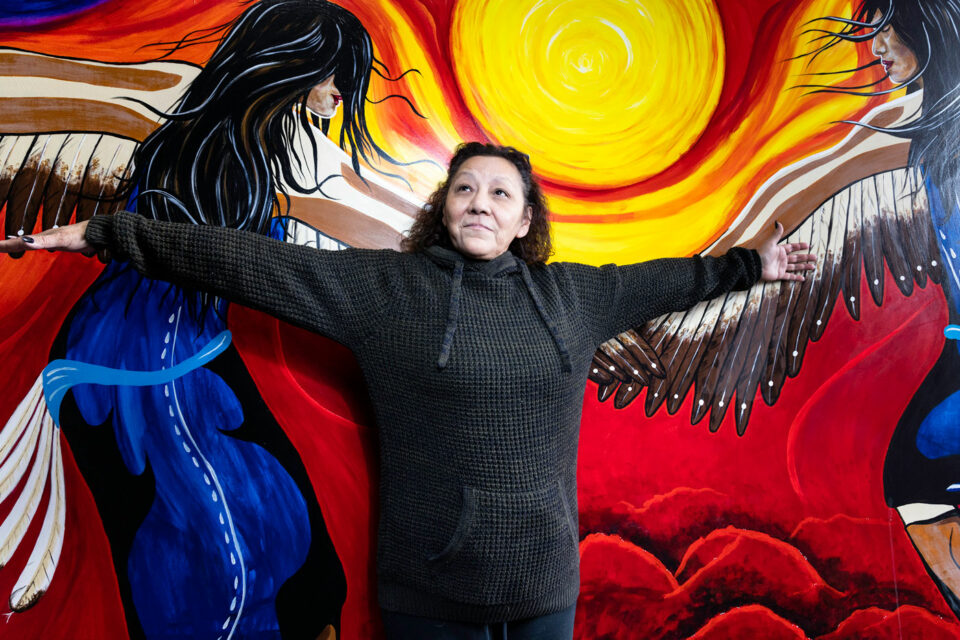 You might not know Flora Johnson’s name, but there’s a good chance you’ll know her work. Her art has adorned Southcentre Mall, the Women’s Centre of Calgary and the John Howard Society building.

The Indigenous artist and grandmother of seven is a survivor of the Sixties Scoop. Born in Manitoba, she was taken from her family at age five and placed in foster care. She was adopted by a family in Minnesota and forced to end her relationship with her eight siblings and her culture. Growing up, she endured racism, as well as physical and sexual abuse.

Johnson relied on painting to escape the cruelties at home and school. “Art was something that I always went to because I could tune out the negativity,” she says.

When she was 29, Johnson’s husband died in a car accident, leaving her with three young children. She visited a Medicine Man who told her to return home. So, in 1996, Johnson drove to Canada and reunited with one of her brothers on the side of snowy Alberta highway. “He hugged me and I just cried,” she recalls.

Johnson worked as a B pressure welder but continued painting. In 2019, she received her first big commission — a mural at Calgary’s John Howard Society, a place she credits with helping save her son’s life. The following year, she turned her full attention to art.

In addition to murals, Johnson creates and sells paintings, as well as painted hand drums and feathers featuring bold colours and motifs of animals and women. Her work was recently part of the Truth and Reconciliation Indigenous Art Exhibit at Southcentre Mall.

She admits she sometimes struggles to make a living as an artist, but money isn’t what drives her. After many years of separation from her family, Johnson is fiercely protective of her relationship with her children, grandchildren and extended family. “I always say to people that I am a result of what society gave me. It’s not supposed to be negative or positive, either. It’s kind of a combination.”

And healing is an ongoing process. “I’m going to keep healing until I go on my next journey,” she says.