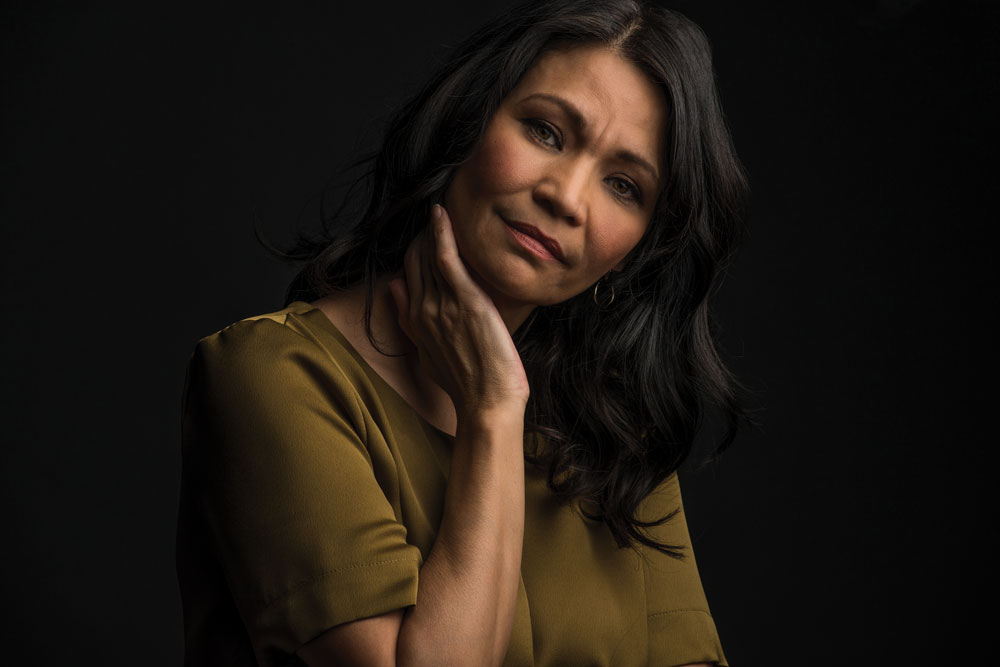 On an overcast day in late September, Michelle Thrush is tucked into a corner at the Loop restaurant in southwest Calgary. Dressed in a dark sweater and slim jeans, the lovely actress blends in with the crowd but, thanks to the success of an Aboriginal Peoples Television Network (APTN) series called Blackstone, is becoming more recognizable by the day.

Thrush plays Gail Stoney, an aboriginal woman who is dealing with her daughter’s suicide, not to mention her own shame, guilt and alcoholism. In 2011, Thrush won the Gemini Award for Best Performance by an Actress in a Continuing Leading Dramatic Role for her portrayal of Stoney.

“Michelle really sinks herself into a role,” says Ron E. Scott, Blackstone’s executive producer, writer and director. “And she has a lot of life experiences that have helped her.” Indeed, one of the most challenging aspects about her role on Blackstone, says Thrush, is opening herself up to the pain and darkness of her own past. Born and raised in Calgary, she says her parents loved her but were alcoholic and unreliable. Sometimes, she would arrive at school without having slept because her father had been up all night “raging.”

“At a really young age, I knew that what was happening in my home wasn’t normal,” she says. School was no safe haven, either. Thrush, who is part Cree, remembers times kids at Bowness High School would call her a “squaw” and harass her about her parents’ alcoholism.

“I remember that I felt embarrassed to be Native because my parents didn’t teach me any of the good stuff,” she says. “I always stated very proudly that I was Cree, but there was this underlying shame.”

As the actress, who is perhaps best known for her roles on North of 60 and Arctic Air, reminisces, tears fill her eyes. Channelling those emotions for her work on Blackstone is difficult – and necessary. “I couldn’t skim the surface. I needed to dive into the pain,” says Thrush. Having now shot four seasons of Blackstone, she says the role continues to be hard but, in a way, is therapeutic.

“That’s an important part of the arts. We are continually portraying parts of ourselves that are hard to deal with and learning how to make that work. Every time I do a role, I learn more about myself.”

Thrush first discovered the power of the arts in her drama class at Bowness High. She cites her drama teacher as a life-changing influence and says drama was the only class she was good at. When her teacher gave her a small role in a play, Thrush had her first taste of working with a team. “Everybody has to work together. I love that feeling,” she says. “I guess I’ve always been searching for a place where I fit in, and that’s what drama gave me.”

“I want to be a small part of contributing to that collective healing of our families. If I can do that, I will feel complete in my life.” – Michelle Thrush, actress

Thrush’s sense of belonging grew when she changed schools near the end of Grade 9, attending Plains Indian Cultural Survival School on 17th Avenue S.W. Though the school didn’t have a drama program, Thrush found something else there: a family.

“It was the first time in my life that I felt accepted, that I didn’t feel like a freak,” she says. “There were other Native students there, and I learned so many wonderful things about myself, about my culture, about my language, about drumming and singing. They filled in a lot of the voids that my soul was just begging for.”

The school also gave Thrush the support she could not find at home, like the times staff let her nap on a couch at the back of the classroom when she hadn’t been able to sleep the night before. “What other school would do that?” she says.

Thrush’s childhood hardships had a profound effect. Even after landing her first film role at the age of 17, she did not consider acting as a potential career; instead, she planned to devote her life to helping children through social work. When she met Gordon Tootoosis, the accomplished First Nations actor who would go on to become her father figure, he gave her a piece of advice that changed her life.

“He told me, ‘If [acting] is what your heart wants, you need to follow it and be true,'” Thrush says. And she listened. With her parents finally sober and nothing tying her to Calgary, she moved to Vancouver when she was 20 and found an agent.

During her five years in Vancouver, she landed bit parts and then spent two years doing theatre in Toronto. Thrush moved back to Calgary in the late 1990s for her role on North of 60 but kept her ties to theatre. In 2013, she co-directed and acted in the world premiere of Making Treaty 7, a show with both First Nations and non-aboriginal performers. All told, Thrush has amassed more than 40 television, theatre and film credits, working with actors including Benicio Del Toro (in 2013’s Jimmy P.) and Johnny Depp (in the cult classic Deadman), and has walked the red carpet at the Cannes Film Festival.

Despite the credits and the awards, her desire to help children has never faded. In fact, she says acting has opened the door to helping in a way that social work could not. For the past 10 years, Thrush has travelled to aboriginal communities and shelters across Canada to perform as Majica, a therapeutic healing clown. Majica performs for young kids and teenagers, and also has a show for parents.

“Beyond film, my passion in life is working with our families and helping to defragment the damage that was done through residential schools to our families,” she says. “You cannot disconnect the child from the parent without huge damage being done. When it happens generation after generation, it destroys the family system.”

Through her clown work, Thrush tackles serious subjects but also teaches kids to laugh, to respect themselves and each other and to dream. “It’s using the arts to empower and to heal,” she says.

Cheryl Oberg has been a therapeutic clown with Alberta Health Services for the past 10 years. She was one of Thrush’s clowning teachers and has seen her perform for kids. “Michelle is doing amazing work out in the world with the aboriginal population in Canada. She has this beauty about her when she works with these children,” says Oberg. “Her character is young and has suffered, and, when you share that suffering with others, they can relate. She touches their hearts and gives them hope for their future.”

Thrush is passionate about the work she accomplishes with Majica. “I want to be a small part of contributing to that collective healing of our families. If I can do that, I will feel complete in my life,” she says.

Part of that goal, she says, is raising her two daughters, Imajyn and Indica, who are 15 and 12, respectively, with healthy morals that they can pass on to their own families one day. “That is success. If I do that, then I’m feeling really good about life,” Thrush says. “No matter if you’re Native or anything else, we need to guide our young people into what it means to be contributing members of society and to respect ourselves.”

To help guide her daughters, Thrush is teaching them all of “the good stuff” she missed growing up. When her oldest daughter was 11, Thrush put her through rites of passage; a few women surrounded her in a sweat lodge and, afterward, a group had a feast where they gifted her with knowledge, offering wisdom on everything from how to treat her body to what it means to be a young, powerful female. Thrush plans to do the same or her youngest. Building a strong sense of identity in young people is key, she says, especially when most of them are looking to television and the Internet to learn what it means to be an adult.

“I look at these young women today and they’re all trying to be Kim Kardashian,” she says. “It’s very, very sad.” For their part, Imajyn and Indica are certainly not trying to keep up with the Kardashians. The girls front a lo-fi punk/grunge band called The Basement Demons with two of their cousins, and have played at festivals such as Sled Island. Thrush chooses to live in Calgary not just because she loves the city, but so her daughters can be close to family. And close they are; the band’s name pays homage to where they practice: in their grandmother’s basement on the Tsuu T’ina Nation reserve. Thrush is a proud mom and attends all of The Basement Demons’ shows but knows better than to stand in the front row.

Even so, she risks embarrassing them. “They played Tubby Dog at Sled Island. They were doing this great song, and I was one row back from the front,” she says. “And Indica, who’s the lead singer, is yelling, ‘And then I wanna!’ And she sees me bopping around and yells, ‘Mom! Mom, don’t dance!’ and keeps going, ‘And then I wanna!’ Everyone looked at me and cracked up.”

Thrush says she raised her daughters to believe there are no limits on what they can accomplish – and she, herself, is poised to lead by example. Although her career until now has been strongly associated with her identity as an aboriginal woman, Thrush says she is eager to play a role that has nothing to do with being Native. She wants the same opportunity for every aboriginal actor.

“I am on a mission to encourage casting actors because of who they are, not because of being Native,” she says. “It’s so important for directors and casting directors to take that risk right now and start bringing in actors because they might be interesting in a role, instead of waiting until a Native role comes along.”

Thrush says she would be thrilled to star in a film that’s Blue Valentine-esque; all about the love and pain in relationships – with no discussion of her character’s race. Another goal is to produce her own 13-part parenting series for APTN. The project currently has the working title Families First, and she’s waiting to find out if she’ll get the green light to shoot.

Today, though, all Thrush is focused on is the weekend ahead. She’ll head to Nanton to watch her girls headline a music festival, but don’t look for her in the front row. “I’ll be trying to stand as far back as possible,” she says and smiles, “so I can have a little movement.”