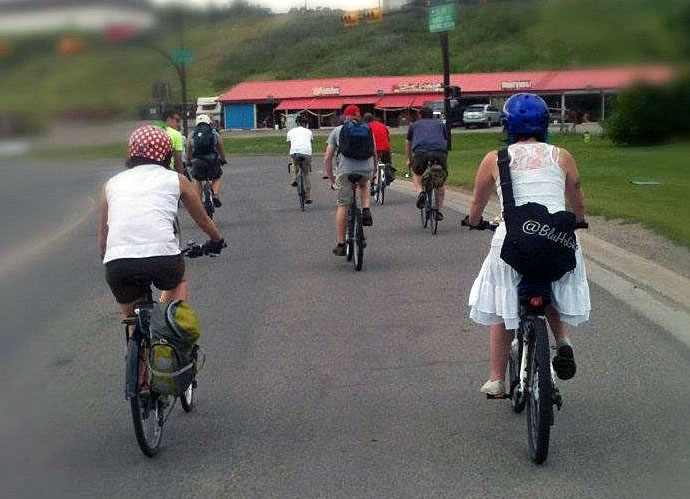 The advantages of bike commuting are widely known and the lifestyle is on the rise in Calgary. Bike commuting was up 20% in the city in 2012 from the previous year.

“You can get fit cycling. It saves you money. It’s sexy. It’s fun,” says Sean Carter, co-owner of cycling shop and hub BikeBike.

The 2011 City of Calgary Cycling Strategy notes that less than a quarter of Calgary’s bike commuters are women, and aims to increase this statistic to 40% by 2020. Carter estimates two-thirds of BikeBike customers are women, about half of whom plan to commute.

“It’s growing like crazy, based on how we’re growing,” says Carter.

For a decade, Julie Gregg has commuted between Parkdale and downtown. She says it’s a challenge for women to bike while maintaining professional appearance expectations, “I work in a corporate office so I can’t wear what I ride in and I can ride in what I wear to work. It takes preparation.”

Kimberley Nelson, a board member for Bike Calgary and an Urban Cycling Skills Course instructor, commutes from Lynnwood to Brentwood each day. She thinks safety concerns make some women hesitant to bike: “It’s the intimidation factor. Women see infrastructure differently [from men] and they’re more cautious.”

Nelson has observed that recognizably female cyclists are treated more respectfully on the roads.

“Last year I started dressing more like a girl. My winter coat is now bright orange and pink, and right away I started noticing a change in attitude on the roadways,” says Nelson. “I find people give me more space.”

For Gregg, driver hostility reflects on the motorist, not the rider: “If they have a resentment attitude about bikes on the road, it doesn’t matter what your gender is.”

Gregg first rode a bike to work out of necessity during a transit strike. The experience taught her cycling could be a viable option, even a time saver.

Nelson says women can be discouraged by motor traffic.

“There are probably as many women as men on the pathways, but as soon as you put them in a traffic situation, if there’s any kind of intimidation – a driver guns his engine or comes too close or yells something derogatory – that’s the biggest barrier,” she says.

Nelson says women starting out in the Urban Cycling Skills Course tend to gain confidence faster in groups, “The women are always terrified when they hear what our routes are going to be. Until they actually see another woman do it.”

Bike Calgary offers Urban Cycling Skills Courses on the fourth Saturday of each month from May to September.