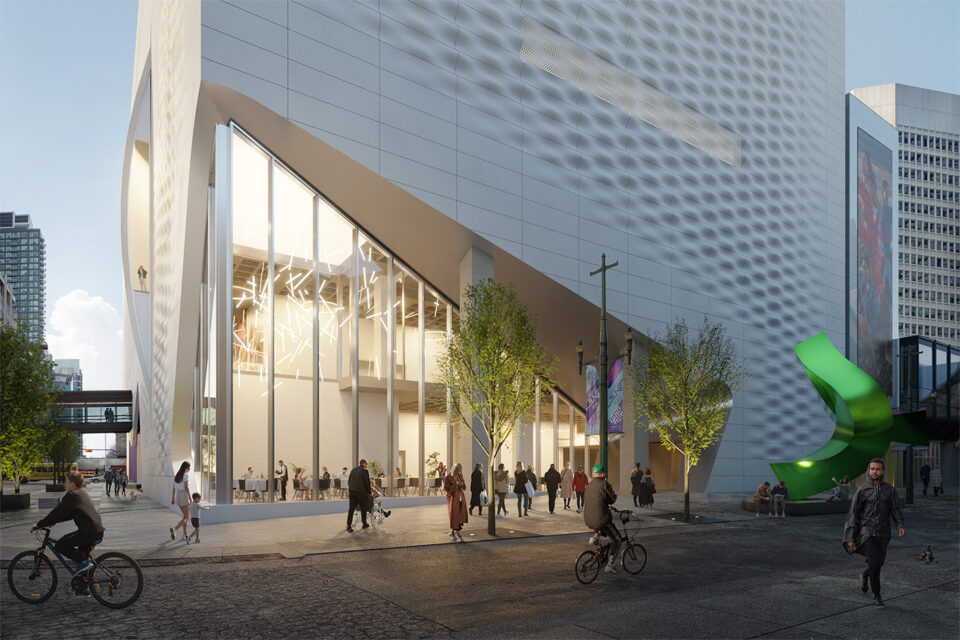 Glenbow is a grim bunker of a building, constructed in the 1970s with the brutalist aesthetic characteristic of that era. It was designed to house the collections Eric Harvie donated to the people of Alberta, and, as a vault for art, it’s brilliant: the absence of windows and a loading capacity more than twice that of a typical office building make it uniquely secure. But, as a destination for visitors, it falls short. There is no grand exterior entrance, just a bland and dim hallway that opens onto a sterile foyer, and an afterthought entryway that weaves through the gift shop. The disorienting rabbit’s warren of a floor plan continues throughout the exhibition halls and spaces.

When architect Robert Claiborne came to visit the city, the building’s shortcomings were obvious to him. But he was entranced by the sheer possibility of the space. He had just driven across the country and happened to end up at Glenbow in June 2013. As the rest of the city focused on the wreckage left by the floods, Claiborne was fixated on what could be built out of the museum. “I spent three hours in Glenbow, and I left there with my sketchbook and just said, I’ve got a million ideas on how this building can be changed, revitalized, reimagined,” he says.

Serendipitously, the exterior walls were nearing the end of their natural lifespan, and the museum’s board was considering a minor redesign. But Claiborne and his team at the architectural firm DIALOG didn’t have a small renovation in mind. Rather, they proposed a reincarnation that would flood the impenetrable fortress with light. Their compelling vision convinced the board, and Glenbow closed in the fall of 2021 for the $120-million project, with hopes to reopen in 2024.

The transformation centres on natural light: the careful removal of floor plates will create a soaring central gallery and additional double-height gallery spaces. Transparent storage will allow visitors to see even collections that aren’t out on display. A rooftop terrace will open to the Alberta sky while a new “skin” — a unique concrete material that appears to float over the existing building — will be installed to protect the structure. Perhaps the most evocative elements of the design are the two prominent street-level entrances — Glenbow has never before had an entrance door that led right into the museum. In addition to serving as a “welcome mat” for visitors to the museum, the doors will provide sightlines through the gallery and allow light to flow in.

“We not only have an opportunity to do something momentous here, but we have an obligation to reimagine the role that this community asset can play in supporting the future,” says Nicholas R. Bell, president and CEO of Glenbow. “Museums have a long, complex and pretty fraught history with the people that they serve and don’t serve.” To that end, community engagement with diverse stakeholders across the country and Indigenous advisors has been an essential part of the reimagination of the museum.”

Shifting the narrative of museums is a monumental task, but Bell is hopeful that real change is possible. “[Museums] can be community centres where we celebrate the panoply of human experience,” he says. “There’s an opportunity here for Glenbow to be people’s third place.” This past February, the museum announced permanent free admission upon its reopening thanks to a $25 million endowment fund created by the Shaw Family Foundation, another step toward creating a more open and community-minded institution.

It’s not yet clear what the pandemic will leave in its wake, but there’s reason for hope, says Claiborne: “This is a perfect time for all of our institutions to really reimagine themselves toward being more inclusive, more representative of who we are as a people in Calgary and Alberta, in Canada, and in the world.”