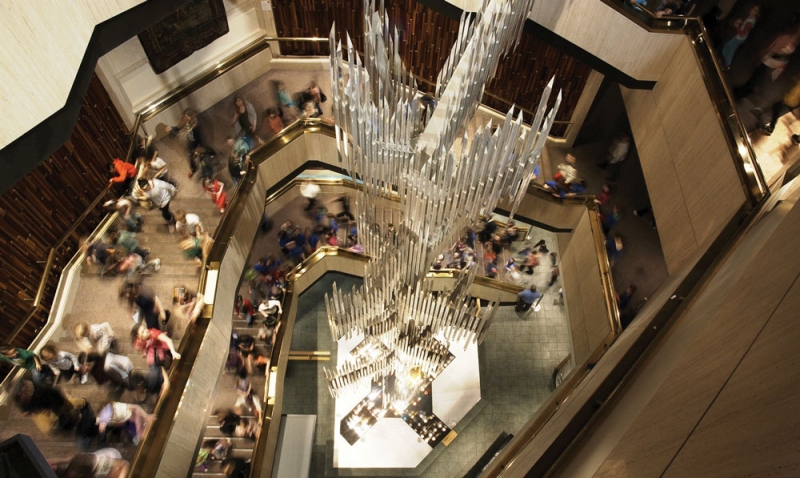 The striking form of Aurora Borealis serves as a literal centrepiece for the Glenbow Museum, ascending four floors from the lobby to the ceiling.

Commissioned by Glenbow founder Eric Harvie and designed by Canadian artist James Archibald Houston (1921-2005), the sculptural piece (nicknamed “The Fortress of Solitude” by some visitors on account of its similarities to the set piece from the vintage Superman films) stands 65 feet, weighs almost two metric tonnes and is comprised of 700 acrylic prisms. Every 30 minutes, coloured incandescent lights at the base of the sculpture programmed with 188 precise cue times shimmer up the length of the structure for a five-minute show.

Houston is said to have first visited the Glenbow in the mid 1970s, while the building was under construction. The stairwell column – open to the sky at the time – overwhelmed him at first, though he would eventually draw on his experiences living and working among the Inuit in the Eastern Arctic and find inspiration in the patterns created by the northern lights.

“It’s a mystery,” says Glenbow exhibit design and production manager Ray Jense, peering upward at the sculpture from the base. “I don’t see seams in the aluminum structure … I don’t know that they didn’t just drop the whole piece in with the roof open.”

Houston collaborated with lighting technicians and arranged to use the work of ’70s electronic music pioneer Isao Tomita (whose version of Claude Debussy’s “Children’s Corner, No. 4” provides the soundtrack) to create the multimedia elements of the artwork.

Despite the number of experts involved, the technology has not been without issue. Jense says he recalls a time when the lights on the Glenbow’s second floor would flicker whenever the Aurora light show engaged. More recently, the power outage brought on by the 2013 flood caused the 1990s-era lighting board to fail and its memory was lost.

Jense used the opportunity to update the technology and the new system has since been reprogrammed using a hard copy of the original cues. “We’re duplicating it exactly as it was written and how the artist intended,” he says.

“I was surprised at how many calls I got from people asking if it was running. They experienced it as a child and now it’s something they come to see with their kids. It’s one of those things for Calgarians.”

Aurora Borealis is back up and running for the summer season.